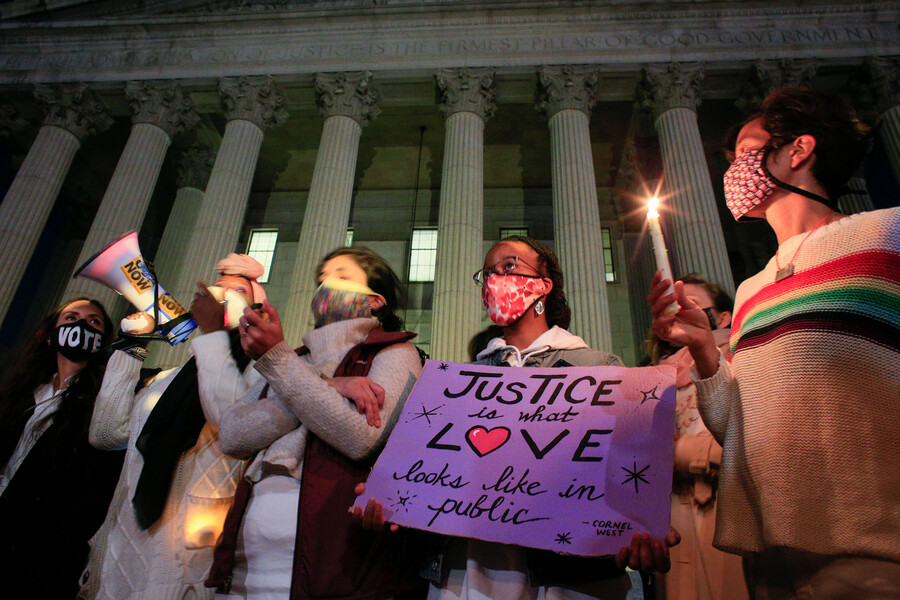 When I learned that Supreme Court Justice Ruth Bader Ginsburg died, I felt overwhelmingly angry. For the life of me, I could not reconcile the outpourings of veneration and earnest professions of hero worship with my own feelings. Fury? Yes. Deep sadness at the impending demise of democracy? For sure. The ache of bottomless grief? No. More than anything, I was furious about this country’s inability and unwillingness to grapple with how the construction of race has catapulted us into this moment. How do I reckon with the record of a judge who was a feminist pioneer in many ways, but whose views and decisions often excluded nonwhite women? In the midst of legitimate grief over both the loss of her life and the loss of her seat, how do we complicate the overwhelmingly white feminist barrage of praise? When I asked the indomitable legal scholar Kimberlé Crenshaw about Ginsburg’s legacy and contributions to jurisprudence, her response was measured.

We spoke the night Kentucky’s attorney general declined to indict two of the officers responsible for killing Breonna Taylor—only charging one officer with wanton endangerment—as Black America once again confronted the overwhelming helplessness that accompanies being targeted by multiple arms of state violence. There was a weightiness to our conversation about the role of the courts in the lives of Black people and Black women in particular. While I was set to dig into how Ginsburg’s record doesn’t hold up to intersectional scrutiny, Crenshaw pushed back slightly. “Her Shelby dissent is one of the best takedowns of the Supreme Court’s crass dismantling of the crown jewel of the Civil Rights Movement,” she said, referencing the court’s 2013 dismantling of the Voting Rights Act of 1965. “She makes clear that relying on preclearance and its effectiveness as a rationale for gutting the civil rights legislation is outrageous. She referred to it as throwing out an umbrella because you’re not getting wet; it was such a witty call out. In these moments of searing truth she was unmatched.”

Crenshaw conceded that Ginsburg wasn’t perfect when it came to race, mentioning her decision not to honor Indian and Indigenous rights in Sherrill v. Oneida. “But her life’s work did move the needle of gender equity before she got on the court and after she was there,” Crenshaw said. Patrice Sulton, director of the DC Justice Lab, a Black and community-led legal advocacy group, agrees. “We don’t have that many people who were that disciplined for that long and worked for civil rights—whoever’s civil rights,” Sulton told Bitch. “Even if it was leaving someone out, even if it was subordinating some interests to others. There aren’t many people—short of Thurgood Marshall—in the American justice system, who have done that much for that long, as diligently as she did.”

In my mind, I silently add the caveat of white people to her praise. To that, I agree; it’s indeed rare to find a white woman so consistently dedicated to the betterment of the world, through action, including her own litigation and beautifully authored opinions. Sulton and Crenshaw challenged the defensiveness I’ve been cultivating over the past several days—the resistance to awe and demand that even our heroes should be held to account for their flaws—by pointing me to a case that Ginsburg argued as an attorney. Duren v. Missouri, a case she argued in 1979, ruled that jurors couldn’t be excluded because of their gender, setting the legal precedent for Batson v. Kentucky, which decided that jurors couldn’t be excluded because of their race. The truth is that even as a self-proclaimed political wonk and avid follower of the courts, I am not a legal scholar. While both of these Black female legal scholars laud Ginsburg’s additions to jurisprudence, they’re resolute that her efforts don’t mean we should be satisfied with her record.

“Because the court has moved so far to the right, there is not enough distinction now between truly centrist and liberal justices,” Crenshaw said, helping me get to, perhaps, the heart of my own critique. “One of the things I wrote about 30 years ago was the paradox of liberal reform. You win at a symbolic level and people believe the work is over.” And that’s the crux of it: the realization that even with immense gains Ginsburg’s life of service afforded women, there’s a feeling that her work is somehow the pinnacle and not the base from which we should be transforming our legal system. “At the heart of Black feminist theory is this idea that we can build a world where all of us are free from relationships rooted in dominance and oppression,” says Sharhonda Bossier, deputy director of Education Leaders of Color. “That is true in both our intimate and our public and political relationships.”

Bossier also acknowledges many of the massive accomplishments that Crenshaw and Sulton highlight, but notes that Ginsburg’s decisions lacked a fundamental critique of systems of power and oppression and what allows those systems to endure. Included in the absence of analysis is the erasure of Black civil rights attorney Pauli Murray and her profound influence on Ginsburg’s own legal thinking. Bossier also brings up another, more personal issue she has with Ginsburg: an extreme distrust of Ginsburg’s much-lauded friendship with Justice Antonin Scalia, the most conservative justice on the court and the often gleeful eviscerator of civil rights. Scalia helped usher in the era of Mitch McConnell’s unbridled political power by removing every reasonable restriction on campaign fundraising in the Citizens United v. FEC decision. He joined the majority opinion decision to end voting rights reform. And yet, while Ginsburg’s minority opinions ferociously opposed the constitutional views he articulated, they had a deep, amiable relationship outside of the court.

Ruth Bader Ginsburg’s legal career—one longer than my own life—is worthy of study and praise, but it is a career limited, in many ways, by her inability to see beyond her own identity as white and woman.

Even as the Notorious RBG meme surfaced in popular culture, so did a much more white, much more niche musical about their decades-long friendship. Bossier considers this an indictment of a larger, unexamined issue that gets lost in the public’s adulation—Ginsburg’s whiteness. Her ability to forgive political differences and commiserate with a man who—if his professional opinions are to be believed—held Black, Indigenous, poor, and disabled people in the absolute lowest esteem, is troubling. “Ginsburg is a prime example of someone who is leaving a complicated legacy,” Bossier said. “She helped moderate Scalia’s public image. This was a man who professed to believe in states’ rights but stopped the election recount in Florida. This was a man who stood in the way of progress on a number of fronts. The only person whose image benefits from that friendship is Scalia’s. And we should talk about that.”

It’s Ginsburg’s ability to dip in and out of the issues that so directly affect people who don’t look like her that raises larger questions about how whiteness is performed in this country. Whiteness is system of power, and even one of the leading feminist legal scholars of her time is likely to maintain a structure that she has benefitted from her whole life. I will never forgive her for saying Colin Kaepernick’s national anthem protest was “really dumb.” She later walked back the statement, admitting she had known little about the purpose of the protest at the time of her original comments. By then, the damage was already done; one of the most publicly “liberal” justices on the highest court in the land had ridiculed a peaceful protest against police brutally taking Black lives. Kaepernick himself pointed out that her knee-jerk reaction was a common one, stating, “As I was reading that I saw more and more truth how this has been approached by people in power and white people in power in particular.”

When I ask Bossier, a former high-school civics teacher, how she would teach Ginsburg in the classroom she pauses: “It’s important to note that she has had an important impact on the way women and people of color are able to seek relief through the courts. But I want my students to know that it’s almost required to be critical of our idols. We should ask our young people, ‘Where did she leave work to be done?’ Perhaps that question is the one I haven’t heard probed enough over the last few weeks.” Ginsburg’s legal career—one longer than my own life—is worthy of study and praise, but it is a career limited, in many ways, by her inability to see beyond her own identity as white and woman.

Read this Next: Our Loss 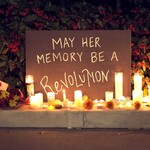 by Michelle Krasovitski
It’s a disservice to remember Ruth Bader Ginsburg as a feminist icon but erase her Jewishness. 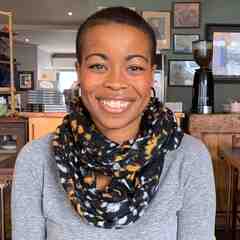 Nicole Young is a writer and avid procrasti-baker living in Philly, who loves to talk about race, Black womanhood, politics, and children’s literature. Nicole is a writer at The African American Policy Forum and the co-host of the Kidlit These Days podcast. You can find her mostly lurking and rarely tweeting at @ittybittyny.