Mishaps and Milestones“Insecure” Moves from Chaos to Clarity 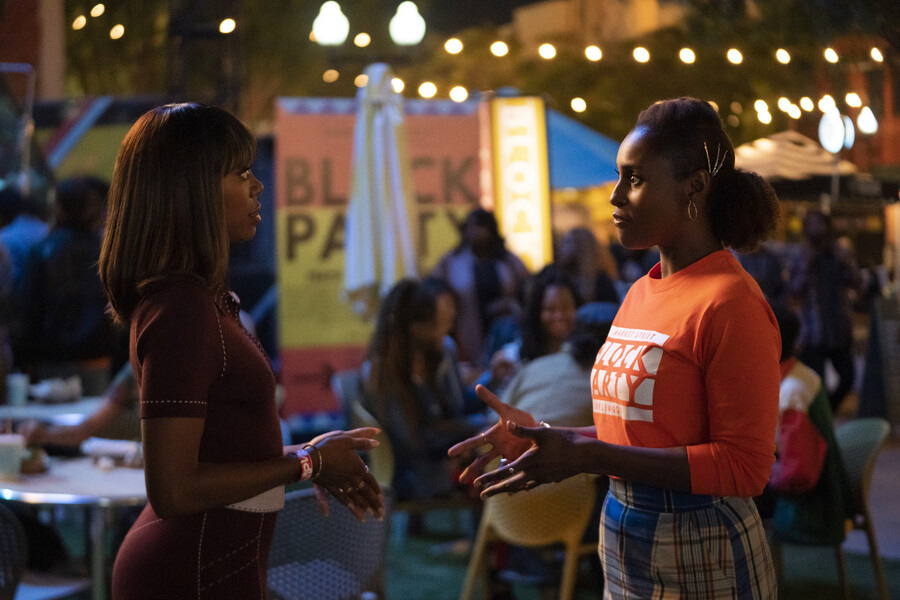 When we meet Issa Dee (Issa Rae), the titular protagonist of HBO’s beautifully Black dramedy Insecure, she’s 29 and in the throes of a crisis. She’s become complacent at We Got Y’all, a nonprofit organization run by clueless white people that seeks to serve Black youth in Los Angeles. She’s been dating her live-in boyfriend, Lawrence (Jay R. Ellis), for five years, through his depression and his joblessness. Though the relationship no longer serves her, she doesn’t know if it’s worth abandoning ship for something (or someone) else, so she stays, no matter how miserable she is. And then there are Dee’s friends—mainly her best friend, Molly (Yvonne Orji)—who all have their fair share of troubles too, many of which they call on Dee to help counsel them through. All in all, Insecure approached the doubt and swirling chaos that accompanies being almost-30 with raw honesty.

Turning 30 feels like a milestone, a turning point for those craving some form of stability and clarity. It’s such a critical in-between period, in fact, that Insecure spent three seasons on that single year between Dee’s 29 and her 30 birthdays. In that time, her life gets turned upside down: She and Lawrence break up after she cheats with an ex-boyfriend; she leaves We Got Y’all without any real sense of where she should move next in her career; and she watches, with a small semblance of frustration, as her friends begin figuring it out for themselves, with Molly finally entering into a healthy relationship; Tiffany (Amanda Seales) having her first child with her husband; and Kelli (Natasha Rothwell), well, being Kelli.

In this fourth season though, the first that fully chronicles Dee’s 30s, Insecure moves us beyond the chaos that defines the latter 20s and toward the clarity that tends to come with a new decade. Dee is seemingly wiser (choosing to dump a man with three children after a condom breaks while they’re having sex), more ambitious (orchestrating a block party that celebrates Black talent in Los Angeles), less patient with bullshit (going through a friendship breakup with Molly), and overall, more in tune with her needs and desires (devoting herself to self-care Sundays). Dee is a grown woman, for real this time, with less room to make mistakes and more wisdom about what happens when you waste time or settle for just being content.

She wants more, an experience that many Black women in their 30s can both understand and relate to. We spoke to five of them about what this season means to them, how it reflects their own journeys through this decade, and how this show—finally—stepped into its realest season.

Insecure has always been a landing place for me where I felt like I got to see all of the different aspects of myself via different characters. This season has reminded me about my growth and how much I am continuing to grow as a Black woman—as well as all the relationships that I thought were gonna be forever. I have, and will, be all of these women so it is lovely to see myself onscreen in a way that isn’t watered down. This season has been a reflection on the different things we have and will go through.

This season of Insecure has been painful to watch because I recently went through something similar with my own best friend of 25 years. Seeing Issa and Molly snipe at each other, downplay each other’s accomplishments, and refuse to let each other grow has been upsetting. Fortunately, things ended well for me [in my own life], but I’m hoping that Issa and Molly make the time to come together with open hearts to really examine their issues. Their codependence has been apparent for a while, and without each other to lean on they are spiraling. Friendship breakups can be hard because there’s no common cultural script for how they should happen, and I think it’s admirable that Issa Rae is confronting that hurt in Insecure.

As a Black thirty-something who’s worked in white spaces my entire career, [I connected with how] Insecure sheds light on the Black millennial corporate experience. From discussions around the importance of advocating for yourself at work to dealing with microaggressions, the characters provide opportunities for us to be in their shoes, to walk around in their experience—because it’s the same reality we witness. Whether we’re joining #TeamLawrence or siding with Issa in her friend feud with Molly, this season of Insecure gave us exactly what we needed. TV for us.

Friendship breakups can be hard because there’s no common cultural script for how they should happen.

As I’ve gotten older and wiser, I’ve realized it’s quality, not quantity, that matters when it comes to friendship. Seeing Issa and Molly’s falling out this season has made me want to yell at the television more than once, and I’ve also enjoyed watching Black female friendship taking center stage on the show as well. But ultimately it comes down to these three questions Dr. Rhonda, Molly’s therapist, asked in Episode 9:

Is the relationship still serving you?

Are you willing to do the work to repair the relationship?

Ultimately, friendships—like any other relationship—require work, but both people have to be willing to do their part.

This season of Insecure tackled adult Black women’s friendships. Black women’s friendships are a saving grace but also a mirror [that shows] us our own imperfections. We’ve all been Issa or Molly, depending on the circumstances of life. Sometimes we can’t show up in our friendships because we’re fighting against ourselves but at the end of it all no partner, job, or ex can compare to a Black woman’s circle of the Black women she can count on. We may not always get it right, but at the end of it all, there’s no power like the bond with other Black women. We need each other. Molly and Issa need each other.

Read this Next: The Beautiful Brilliance of "Insecure"