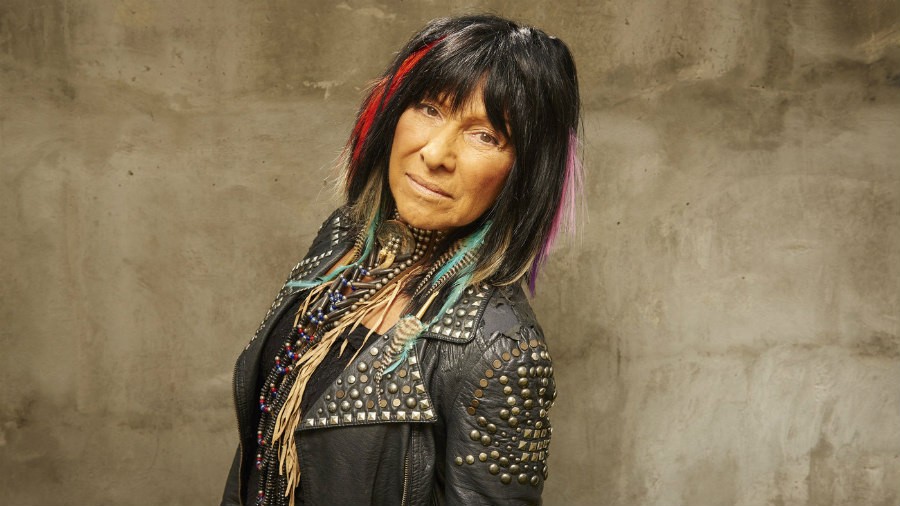 Editor’s Note: We are republishing this story in honor of Indigenous People’s Day, which is September 22. Please click here to read more of our coverage about Native Americans.

This interview was originally published on August 11, 2015.

Before I call Buffy Sainte-Marie, I put on her 1969 album, Illuminations. The album was released to little fanfare and was considered a commercial failure. By the time Wire named it one of the “100 Records That Set the World on Fire” in 1998, it had already become a touchstone of electronic folk, a collection of ethereal sounds and synthesizer punctured by Sainte-Marie’s snarls and growls.

I remember finding the record at a local shop in Calgary and tracing the yellow-and-black cover, the curled script, and the image of Sainte-Marie, imperial in a long blue gown, her face tilted back, hand outstretched to the sky, and eyes fixed somewhere outside the frame. The cover of her 2015 album, Power in the Blood, features an ever-defiant Sainte-Marie draped in feathers and beads, her gaze still powerful and fixed ahead.

With a career spanning over five decades, it’s tempting to mythologize the 74-year-old singer, songwriter, and social activist. The descriptors attached to Sainte-Marie—a living legend, an unstoppable force, a rare Canadian firebrand—are hyperbolic but apt, though most of her career has revolved around defying assumptions and labels. She has weathered government blacklisting, made music that didn’t fit into the expectations of her genre (Illuminations was long misunderstood by the ’60s folk scene), and continues to advocate for Aboriginal rights in her home country, from her teaching work with the Cradleboard Teaching Project to her recent performance at the Truth and Reconciliation Commission closing ceremony in Ottawa. She spoke to me from her farm in Hawaii, where animals graze the land and time moves slowly. Despite a hectic tour schedule and her many ongoing projects, Sainte-Marie’s voice crackled on the line with energy and a tinge of vibrato.

I love the title of your new album, Power in the Blood, as well as the title track. How does your version play off of the original version of the song, by the British group Alabama 3?

The album has a mixture of protest songs and love songs, including “Not the Lovin’ Kind” and  “Love Charms.” Was it a conscious choice to do this?

It was conscious, but if you take any of my albums, you’ll find they’re very mixed. I’ll have strong, political songs that have some kind of social meaning. I don’t even call them protest songs, I call them issue songs. Every song I’ve done since the ’60s has some element of this. “My Country ’Tis of Thy People You’re Dying” is Indian 101 in a six-minute protest song, but it’s also on the same album as “Until It’s Time for You to Go,” which is a standard in terms of love songs that I wrote a long time ago. So I always mix them up. And I don’t know why other artists don’t do this. It might be that record companies try to get you to be just one way, and they back artists who are single-genre artists. It made it easier for them in their vinyl distribution to put everything in their proper bin. During the ’60s, it wasn’t like that. People were writing love songs along with the political. The ’60s feel a lot like now, where artists can self-publish through the Internet and can be themselves in songs that aren’t just the one, corporate way to do things. Monocropping, I call it.

I wanted to ask you about the value of the protest song. Obviously in your work, you’re very comfortable using the format. How do you see protest songs, and the form of the protest song, acting as a powerful weapon or tool? Does addressing politics and social issues come naturally to you in your performing and songwriting?

In my last album, Running for the Drum, [I had a song] called “No No Keshagesh,” which means “greedy guts.” It’s the name of a puppy we used to have who ate all his food and then wanted to eat everyone else’s food too. The song focuses on the issue of environmental greed from all points of view and is about contemporary issues from a Native perspective. So it does come naturally to me. I’m lucky enough to retain a kind of kindergarten sense of play when it comes to music and the arts. I learned early that in music you can say things you want to and that there are a lot of things you can do in music. I never had the misfortune of going to music school and being told, “No, you can’t do that.” In fact, I’m dyslexic in music and cannot read music on the page. It would be like writing with my left hand. I mean, I can write for an orchestra, but I can’t read it back the next day. So I do it by ear, like many other musicians.

On June 2, 2015, the Truth and Reconciliation Commission of Canada released a report that the government’s residential school system amounted to cultural genocide, confirming what many Aboriginal communities already knew. Do you find it frustrating that the status of Aboriginal peoples in Canada still has a long way to go in terms of recognition and equality? How do you feel the perception and image of Aboriginals in Canada has shifted, and in what ways has it not shifted at all?

Well, I was the final act at the event in Ottawa. For 50 years I’ve been trying to tell people exactly what they concluded. So they invited me to be an honorary witness based on all those years of us trying to make this information available to people. This is a very, very long-standing wish, and the fact that truth and reconciliation even happened at all is a dream come true for me and for a lot of other Native American scholars who have known this information for a lot of our lives. Yet the general public never had a chance to know about it.

I think a lot of Indian people and non-Indian people ask, how could those people have been so cruel? There are a lot of reasons. It was built into their culture to be cruel to children—I mean, read Charles Dickens. The way white people were treating other white people in the 1500s, 1600s, and up until the present day is very different from how Native American people and Indigenous people treated their children. Indigenous people did not have that Roman Empire [mentality] or the British whip in their educational system.

There are a lot of reasons why this is new information for a lot of Canadians and not new information for others. It’s really about education—the true facts have been kept out of the education system. For a long time, I was running something called the Cradleboard Teaching Project, and we have recently transitioned into working in universities and colleges. I haven’t met a professor yet who doesn’t resent the fact that this information has been kept from serious-minded educators. The information has been kept from people and now it’s coming into the curriculum. The good news about the bad news is that more people are now aware of what happened and that means more people are going to be aware of never letting it happen ever again.

In a 2015 interview with the CBC, you talk about the masculinity of the American Indian Movement (AIM) in the 1960s and ’70s. On this album, you sing explicitly about the need for Aboriginal communities to “idle no more” in “Sing Our Own Song.” How do you feel the Idle No More movement, which began in 2012, responds to the American Indian Movement? In what ways do you think it shifts the movement to include more female voices?

In the American rights movement, it was very male, or started that way. It began because a group of Aboriginal men landed in prison and they realized they were there because they didn’t know their rights. During those AIM days, there were a lot of women involved. They didn’t get their names in the papers as much as Dennis Banks and Russell Means, because that’s who the media would spotlight. When I would show up to AIM rallies, I think they were using my name to put a spotlight on the issues. But they obviously didn’t want to turn the spotlight over to me. So you were not hearing from a lot of brilliant Native women at the time, though that doesn’t mean they weren’t involved.

Idle No More isn’t really a new movement. It’s more of an extension of what was going on before the American Indian Movement. American Indian people have been resisting genocide, the destruction of the environment, and the theft of Native lands for hundreds of years. The resistance movement has been going on for a long time.

You’ve had to deal with government blacklisting in the late ’60s and ’70s in the United States when President Lyndon B. Johnson put you on a blacklist after the release of your protest song “Universal Solider.” How do you feel about your role as a musician in terms of working under a government or administration?

Well, people think I should hate the government. But it’s really just an administration of probably four or five guys who are calling the shots. They sit in the backroom and make nasty phone calls, and an artist is gagged from bringing information to the public. It’s all done under the table and among a small group of people, so let’s stop pretending it’s the government. If some administration wants to come along and ejaculate all over the environment, we shouldn’t hate our country because of that. That administration and those boys are not going to last. John Trudell, who is a great poet, has a quote that says there are certain people who don’t want Indians or anybody else interfering with their complete control with land and natural resources. I mean, isn’t that what the great Caesars were trying to do? Isn’t this just basic colonialism? Now it’s corporate instead of nation-state, but it’s still the same issue.

How do you see things shifting or changing? To create change, should you work within your own group, your own movement, versus trying to work against a government?

I think you have to do everything. I think you shouldn’t restrict yourself to either/or. And I think every day you have an opportunity to respond to these issues spontaneously, to approach everything with open ears.

You know, I’ve seen some shit in this world. I’ve seen people wring their hands and I’ve seen people come together and make changes. But the problems are not new and we are not incapable of solving them with the brains we have. I think we just need to stay calm and decolonize.

Stephanie Wong Ken is a fiction candidate in the MFA program at Portland State University. Her chapbook Nebraska & Miracle came out in 2011 via Maison Kasini Press.

God bless you for posting this. Been a fan of this phenomenal woman forever. Her music, her words, everything she does speaks the truth about the world's appalling cruelty to its native people. Glad to see she is still just as feisty and smart as ever on the issues she brought to light years ago and has not compromised one bit. 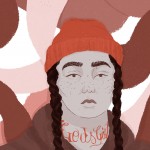 by Erica Buddington
Despite her controversial themes, Young M.A is a reverb of the cipher, a new rung of New York’s hip-hop greats.