Body by Kardashian?Khloé’s Revenge Body and the Strict Demands of the Family Business

One of the reasons the Kardashian-Jenner dynasty has been able to extend its fame far longer than anyone ever thought probable is the gusto with which each of its players commits to his or her archetype. Kris is the manager and mother hen. Kourtney is the one with all the children. Rob is the recluse, Kylie is the lippy baby, and Kendall is the model. Kim well, she’s Kim Kardashian.

If you asked her mother and siblings what role Khloé plays in that dynamic, they might say she’s the funny one, or the caretaker, or the one with the fewest fucks to give. (Khloé herself would likely echo that assessment.) But that’s not the only way she is marked as different from the rest of the family. Simply put, Khloé looks different. She is seven and ten inches taller than Kim and Kourtney, respectively, although she and half-sister Kendall are the same height. That difference in body type has translated into speculation about whether Khloé is the biological daughter of Robert Kardashian, or the product of an affair between Kris Jenner and another man. (O.J. Simpson is the tabloids’ favorite object of speculation.)

Make no mistake: Khloé is just as beautiful as any of her sisters. But we’re meant to believe that the beauty of all of the other women is effortless. We may see them working out with their trainers on Snapchat and shilling weight-loss teas in their Instagram feeds, but for the most part we’re encouraged to consume and interpret their physical beauty and sometimes painfully thin bodies as something they have, not something they’ve worked at. Kendall never talks about the work it must take to stay in couture runway shape year-round. Kourtney claims that she has a wide range of food “allergies,” and we’re supposed to ignore the fact that there’s an overtone of orthorexia in the “healthy choices” that keep her at the same size and weight she was before she had three children. Kylie and the rest of the family spent months denying she’d had fillers put in her lips (at an age at which parental consent is required for the procedure). And Kim has gone so far as to get her famous ass X-rayed on television to dispel any rumors of butt implants. Again and again, we’re told to interpret their beauty as a birth-given gift, not a hard-won goal.

By contrast, in Keeping Up with the Kardashians, Khloé’s memoir (with the vaguely aphasic title Strong Looks Better Naked), and now in her new show Revenge Body with Khloé Kardashian, we’re constantly exposed to the process of creating her body—to the effort it takes for her to be thin, sculpted, and put together. Over the past couple of years, Khloé lost a significant amount of weight, resulting in repeated “Remember when you were fat?” jokes from her sisters. But it’s also left her open to questions, in the press and elsewhere, about exactly how and why she looks the way she does now.

Rather than dodge those questions, as her sisters sometimes do, Khloé has leaned in to them. In doing so, she’s popularized the term “revenge body.” The concept is nothing new—think every romantic comedy in which there’s a montage of a woman getting thinner and throwing out her dowdy sweaters to show an ex what he’s missing—but Khloé is the first nonfictional protagonist to publicly live out an explicitly vengeful body transformation. (The ex she got “revenge” on was Lamar Odom, and the fact that he’s a drug addict with a tragic past who probably already knew what he was missing is a fascinating, but ultimately separate, dimension to the story.)

In print and in person, Khloé has talked about specific dietary changes and the weight loss they resulted in (11 pounds from giving up dairy alone!). She lounges around Keeping Up with the Kardashians sets in tiny tank tops, basking in compliments from her sisters about how thin she looks. But the most pervasive change in Khloé’s persona is the way in which she discusses working out. Strong Looks Better Naked features day-in-the-life breakdowns of how frequently (and early, damn) she hits the gym, Keeping Up with the Kardashians features footage of her with her trainer, and the Revenge Body trailer features her saying she “fell in love with working out” while ducking under bars and whipping battle ropes.

The work of her transformation is clear. What’s less clear is whether Khloé truly wants to be as transparent as she has been about the transformation of her body, or whether that’s something the family brand has put pressure on her to do. Khloé’s body is an undeniably lucrative extension of the Kardashian empire—garnering magazine covers, then a book, and now Revenge Body, the first E! spinoff helmed by a Kardashian sister on her own (other incarnations of Keeping Up with the Kardashians have featured multiple women). And maybe Revenge Body really was conceived out of Khloé’s legitimate desire to share her newfound passion for fitness with the world, and to transform lives in the way in which she believes she’s been transformed.

Revenge Body only confirms that for all the lip service Khloé gives to the idea of changing her life, she still views changing her body as a greater and more essential goal. While the show provides makeovers and new clothes, its primary focus is weight loss by any means necessary, from restrictive diets to abrasive trainers to scheduling contestants for workouts twice a day, seven days a week. Khloé might talk euphemistically about the “transformational journey” of Revenge Body, but it’s hard to find anything inspirational or transformative in a show that inextricably ties happiness to thinness.

Whatever Khloé’s intentions might be, there’s something unsettling about her actions. It’s not enough, apparently, for her to morph her body into something more resembling her sisters. We’re made to believe that Khloé is not like them, not the effortless ideal, but if she works hard, and shows her work, she might be allowed to become a proxy of their beauty. The message it sends is that we can’t be like them, but if we try our hardest, we can pretend to be, and we should want to pretend to be. We should want to get as far away from the role of “fat sister” as we possibly can, and be willing to go to the lengths Khloé has gone (and continues to go) to get there. Khloé’s even gone so far as to say that Kim was and continues to be her “body motivation.” Nothing about that feels like revenge.

Lauren Hoffman is a writer and pop culture critic from Seattle. She is a regular contributor to Cosmopoliton.com and Vulture. Her work has also appeared in BuzzFeed, The Nervous Breakdown, The Stranger, City Arts, and more. She has no cats.

Relevant: Farewell, The Toast, and Thank You! 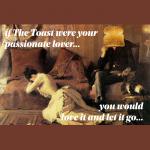 by Dahlia Balcazar
The Toast is closing, and sadly, we must say goodbye. We share our favorite articles from the site.