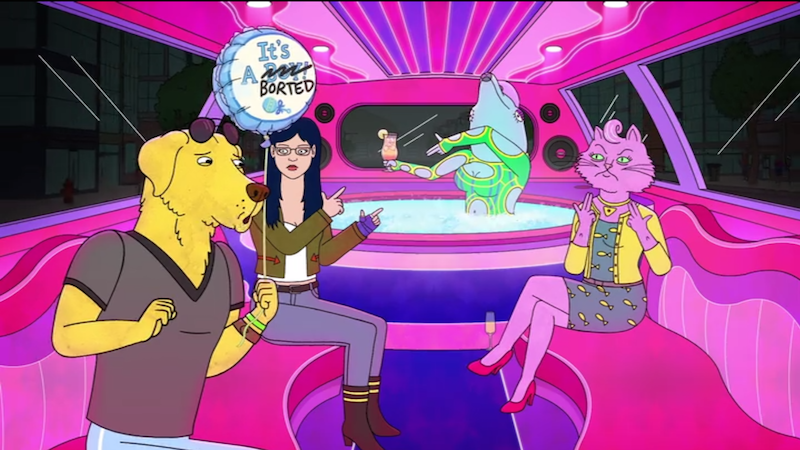 Surreal animated Netflix show BoJack Horseman has a special way of mixing real-life issues with absolute absurdity. In the first two seasons of the show, which is set in an alternate-reality version of Los Angeles where talking animals and humans comingle flawlessly under neon skies, characters grappled with depression and feelings of failure frankly—but also made jokes about cat toys and drugs and embarked on a failed theme park–construction scheme.

In the third season, which debuted on Netflix on July 22, the show employs this satirical- but-honest attitude in its treatment of a real-life experience we rarely see on TV: abortion.

In the sixth episode of the season, Diane Nguyen (a human voiced by Alison Brie) and her husband Mr. Peanutbutter (an upbeat dog voiced by Paul F. Tompkins) are working hard at rather passive-aggressive relationship therapy when Diane finds out she is pregnant. The two drive back from the doctor’s office in awkward silence. They’ve both agreed in the past that they never wanted to have kids of their own. But now they have to actually make a decision. Mr. Peanutbutter notes that they have a lot of options and then delivers a small speech about how he’ll support whatever Diane wants to do:

The couple decide to state their preference on the count of three and both blurt out “abortion!” 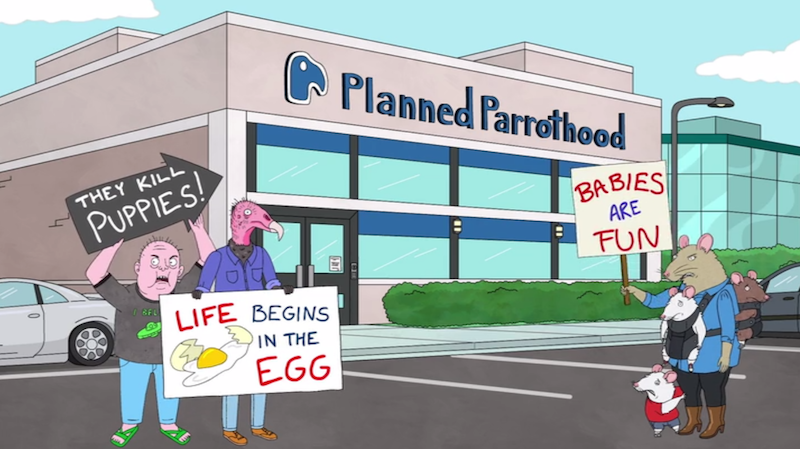 To get an abortion, Diane has to first listen to the heartbeat of her fetus—and walk past these protesters.

I was a bit worried about how the show would handle abortion—this is a comedy, after all, and abortion is a reality that’s very intimate and complicated for many, many people. Jokes making light of abortion can very easily wind up punching down. But this scene was heartening to me as a viewer. Not only does it nicely capture the sweet awkwardness of how Mr. Peanutbutter wants to support Diane but isn’t exactly sure what role he’s going to play, it was refreshing just to hear characters say the word “abortion” onscreen. Often when characters get pregnant on TV or in movies, abortion is never brought up as an option. And when it is, the procedure is often referred to euphemistically or quickly dismissed. Having a couple actually speak the words “abortion” says frankly: Yep, people talk about abortion. It doesn’t have to be a scary word.

That was the main idea behind the episode, show writer Joanna Calo told Buzzfeed. “That was the plan, from the beginning: Let’s tell a story about someone who knows this is right for her, has a supportive partner, but does kind of have to go through the process,” Calo said. “We tried to make it—in our ridiculous cartoon world—very grounded.”

The characters don’t agonize over the decision to get an abortion; it’s pretty straightforward. Instead, the episode’s main conflict comes from what happens next: Diane, who runs social media for pop stars, accidentally tweets from the account of hypersexual dolphin starlet Sextina Aquafina that she’s getting an abortion. Instead of creating a scandal, the tweet gets a lot of positive attention for Sextina—other celebrities quickly show their support for her “bravery” in sharing her abortion publicly. Sextina, ever the savvy star, decides to milk the situation for all it’s worth and goes on the talk show circuit talking about abortion. Then, much to Diane’s chagrin, Sextina releases a new music video called “Get Dat Fetus Kill Dat Fetus.”

Diane, who’s a sincere and social-justice minded individual, watches the over-the-top video with horror. In the single, Sextina dances around in a sci-fi outfit with machine guns and laser cannons and pretends to shoot fetuses. She unapologetically raps, “I’m a baby killer/ Baby killing makes me horny/ Aliens inside me/ Gonna squash it like Sigourney.” To Diane, this is outrageous on two counts: One, that Sextina is commercializing a very personal medical procedure, and two, that laughing about being a “baby killer” will give right-wing abortion opponents more political fodder. Basically, Diane expresses the fears that viewers like me have whenever a pop star plays up being a feminist—are they just cashing in on a trend? And will that actually wind up hurting the cause?

Those were criticisms leveled at Nicki Minaj when she spoke openly in interviews and in her song “All Things Go” about having an abortion as a teenager. While she is adamantly pro-choice, right-wingers still used the song to further their own ideas, saying Minaj is clearly “haunted” by her choice. She responded to this frustration in Rolling Stone: “Millions of people are gonna hear it. And you gotta watch everything you say—people find an issue with every fucking thing.”

Sextina Aquafina approaches this dilemma in a much more absurd way (beyond the absurdity of, well, being a fictional sexy dolphin with her own hot tub limousine). Instead of toeing the line, her ridiculously in-your-face song jumps joyfully right over the line, daring people to call her out. While Diane finds the whole thing irresponsible and exploitative in the worst way, when she’s talking about the situation in the lobby of the Planned Parenthood (which is “Planned Parrothood” in the show. Oy vey.) as she waits for her appointment, another client offers a counterpoint. “Getting an abortion is scary,” says a woman who’s a fan of Sextina’s song. “With all the protesters out front and how you have to listen to the heartbeat and all, when you can joke about it, it makes it less scary.”  Writer Calo said in an interview that the goal here is to use satire and absurdity to make abortion less scary—just like the show often works to make people who are lonely, depressed, and anxious see their fears onscreen, too. “If we can joke about sadness and joke about loneliness and joke about making mistakes over and over again, then maybe it’s okay. We can remove one way of feeling bad about it,” she told Buzzfeed. 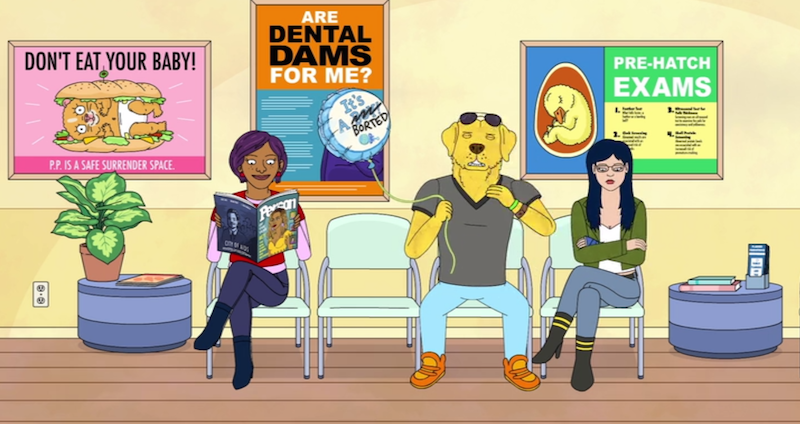 The most interesting part of this episode for me, though, was the simple fact that Diane wants to get an abortion and then actually gets one. She doesn’t change her mind at the last minute, no one tries to talk her into opting for adoption, she doesn’t very conveniently miscarry, nothing horrific happens to her on the way (except for the mild horrors of having to spend time in a limo outfitted with Sextina Aquawafina’s hot tub). While this sounds pretty basic, it’s actually a rare story to see on TV. A 2015 study analyzing how abortion stories are told on TV found that on the infrequent occasions that TV characters consider abortion, about half the time they decide not to go through with the procedure. Abortion is also often portrayed as more dangerous on TV than it is in real life: In American films and TV made since 1916, nine percent of women who got abortions died as a direct result of the procedure. In reality, the real risk of death from abortion in the United States is statistically zero percent. (An additional six percent of abortion-obtaining characters met an untimely end in some other way, like being murdered).

At the end of the episode, Diane is shown sitting on a sofa with a blanket and hot water bottle as she and Princess Carolyn excitedly brainstorm new promotional ventures. She had an abortion and it was a stressful experience, but she’s fine—and nicely supported by friends and her partner. Diane’s situation is similar to other refreshingly straightforward abortion-related plotlines we’ve seen onscreen recently. In the 2015 film Grandma and 2014 comedy Obvious Child, central characters who unintentionally become pregnant think through their options and decide to get abortions. Their stories aren’t simple or one-sided: In Grandma, 18-year-old Sage (Julia Garner) has to figure out how to come up with the $500 to pay for the abortion, and in Obvious Child, Jenny Slate’s character has to grapple with whether to talk about the abortion with the cute guy who impregnated her. What resonates about all these portrayals of abortion is that the characters—just like real people—have to deal with some emotional and logistical problems that result from unintentional pregnancy, but the choice to get an abortion or not doesn’t wholly define them. As is the case for millions of people who get abortions every year, getting an abortion is part of their life stories, but it is not the biggest part of it.

Great article! But I do have to point out it's Sextina AQUAfina. Because, you know... she's a dolphin.

Thanks for the correction, I just changed the spelling of her name here.

Relevant: Amid All the Hubbub Over the Presidential Race, Abortion Restrictions Slip Into State Legislatures 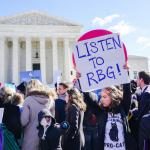 by Veronica Arreola
If you care about protecting reproductive rights, turn your gaze to local elections.