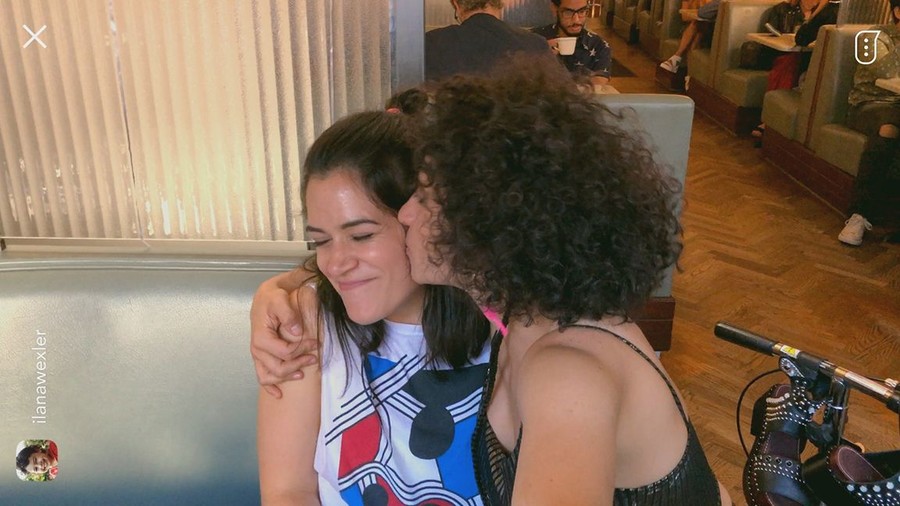 Even if you don’t believe that the best TV series should have a built-in expiration date (and the number of people still following Grey’s Anatomy suggests a lot of you don’t), it’s both rewarding and reassuring to see a show work intentionally to go out at the top of its game. And that’s how the creator-stars of Broad City are playing it in the show’s final season, which kicks off tonight. Ilana Glazer and Abbi Jacobson were in their early 20s when their web series leveled up from its scrappy beginnings to a half-hour Comedy Central series executive-produced by Amy Poehler, one of their comedy heroines. Each episode was an exuberant, tutti-fruitti travelogue of a single day in the lives of the Abbi and Ilana who were amped-up, absurdified versions of their real-life selves.

In situations that veered from relatably mundane (a desperate search for an air conditioner) to cringingly familiar (a horrifying online date) to gently surreal (Abbi’s discovery of her alter ego, a sultry cabaret singer named Val), Broad City has always been character-driven rather than plot-driven, and Glazer and Jacobson went balls to the wall with subject matter, dialogue, and set pieces that comedy audiences weren’t used to seeing. The physical comedy alone is peerless: There was zero time for vanity as both women literally threw themselves into mishaps that included falling into a hole while rollerblading, getting accidentally chained to a truck, and wreaking havoc in a Brooklyn Whole Foods while bombed on pain pills.

But it’s their chemistry that’s made even batshit plot points feel possible: In contrast to ladyfriend cohorts like Sex and the City and Girls—both of which, for many viewers, eventually prompted the question of why the hell their central characters were even friends—Broad City’s vibe has been far more Laverne and Shirley: It’s easy to like Abbi and Ilana and, more important, get why they like each other. Even when they were apart, plot points, dialogue, and detail-packed cold opens served to foreground that whatever external forces imposed on them (crappy jobs, shitty roommates, snotty waiters) they had exactly what they needed in each other: a one-person cheer squad, a troubleshooter, an instigator, a defender.

The emergence of a less madcap narrative anchored the show’s fourth season, in which its first contemporaneous timeline both reacted to a Trump-deranged world and reflected the inherent challenge of making outsized, absurdist comedy in a time of even more outsized and absurdist tragedy. We were still watching Ilana and Abbi mug, lurch, vape, and faceplant their way toward maturity and stability, but this time it was with a tacit acknowledgment that neither creators nor characters could goof their way out of confronting an unease that extended in all directions. That bubble-bursting reality came across in subplots about Ilana’s attempts to conceal her seasonal-affective disorder and Abbi’s struggle to reclaim orgasms hijacked by political anxiety, it also manifested in a kind of anticipatory nostalgia about the very friendship it depicts.

Season 4 was bookended by two episodes, “Sliding Doors” and “Friendiversary,” that testify to the strength of their bond, but while “Sliding Doors” (an homage to the 1998 Gwyneth Paltrow film) filled out the origin story of Abby and Ilana’s fated meeting, “Friendiversary” teed up the show’s final season by underscoring the stark differences in their love languages. The almost manically demonstrative Ilana continues her ongoing semi-courtship of Abbi with an elaborate scavenger hunt in honor of the title occasion; Abbi, meanwhile, has forgotten their friendiversary, so she unconvincingly fakes her way through the evening only to end up instinctually putting her life on the line for her pal.

“Stories,” the first episode of Season 5, bridges a more-than-yearlong gap between seasons via the narrative device of Instagram. Shot mostly from Ilana’s POV on Abbi’s 30th birthday, it follows the duo as they document a walk of Manhattan from top to bottom—a quest to outquest themselves that calls back to earlier adventures (yep, someone falls down a hole), establishes what’s changed since we last saw them—Ilana’s back together with Lincoln (Hannibal Buress); Jaimé (Arturo Castro) has a cuddly older boyfriend—and revisits recurring obsessions (Ilana’s video tribute to Abbi’s “ass of an angel”). But though the show has returned to the sunshine from Season 4’s detour into a bleak New York winter, the Insta lens nevertheless captures Abbi’s anxiety about turning 30 without a clear trajectory and Ilana’s growing awareness that she might be faced with the limits of her own carefree approach to life, work, and love.

The following two episodes (and, I’m guessing, the rest of the season) find both women in situations that are as gloriously weird, awkward, and inappropriate as you’d expect; but this time, they come out the other side with insight and direction toward their respective next moves—not so much deus ex machina as deus ex moldy bagel (oh, you’ll see).

Broad City has always been a love story, and the Abbi and Ilana we know would almost definitely agree that, as with all great romances, it’s better to burn out than to fade away.

It doesn’t feel like it’s been that long since Broad City began its network life, but the discourse within and surrounding popular culture—about gender and race, about representation and erasure, about authorship and access, about the quicksand of “authenticity” and the cudgel of artistic license—has changed in ways that are both hard to quantify and easy to weaponize. It’s difficult to imagine that Ilana’s good-natured but near-constant objectification of all genders would look good through a #MeToo-tinted lens; likewise, her performative wokeness is just that much more ostentatious now. (After procuring a single tentacle of braid from a Harlem braider’s storefront, she reasons that “a touch of cultural appropriation shines a light on the issue.”) The show’s occasional winks at its own relevance have been welcome, but it’s easy to see how even the most self-aware references and running jokes could eventually fold in on themselves.

Beyond that, the onscreen Abbi and Ilana have always, at least on some level, cosplayed precarity; their social and financial safety nets hung just below the frame in every instance of outrageous workplace laziness or irresponsible financial outlays. It’s hard to maintain characters so strongly identified with their real-life creators when those creators have firmly and successfully individuated. (The duo has a development deal with Comedy Central that includes Jacobson’s reboot of—yaassss!—A League of Their Own as a series).

Broad City has always been a love story, and the Abbi and Ilana we know would almost definitely agree that, as with all great romances, it’s better to burn out than to fade away. At the top of the new season, it’s fun to imagine the different ways the series might end: A shameless fan-service blowout with beloved regulars like Lincoln and Ilana’s mom and brother (Susie Essman and Glazer’s real-life brother Elliot) and some of the series’s best guest cameos? A flash-forward film homage? A 21-bong salute? Whatever it is, the show has gotten us to this point by perfecting a balance of gonzo mayhem and increasingly sober self-reflection, and will go out before the fun ends.