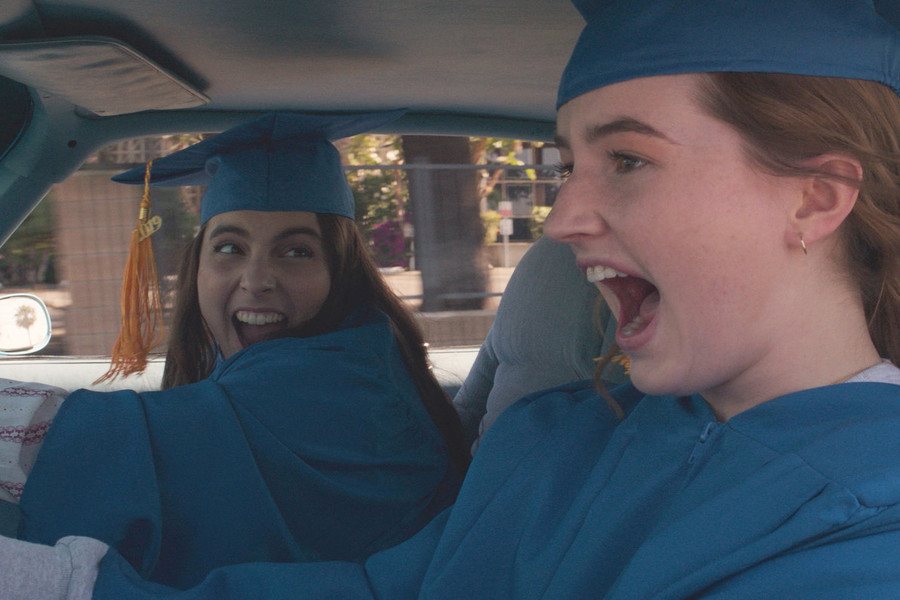 “High school doesn’t have to be a garbage experience” was the thought that crossed my mind as I watched Booksmart, Olivia Wilde’s joyous, rollicking directorial debut about two Ivy League-bound, scholastically high-flying protagonists. If you cannot identify with this revelation, then I’m happy for you: As an adolescent, you possessed worldly insight that I lacked, or perhaps your classmates didn’t consider zealous cliquishness a requisite mode of survival. Maybe the kids you knew weren’t bullying one another—at least not in the most appalling and untenable ways (we do notice, early in the film, that on the sign designating the Class President’s parking space, the “C” and “L” have been crossed out to read “Ass President”).

Or maybe, like film protagonists and bosom friends Molly (Beanie Feldstein)—the aforementioned class president—and Amy (Kaitlyn Dever), you recognized that the sublime and the squalid cornucopia of life’s offerings would not be exhausted over the course of four hormone-addled, fidgety years. And yet, Booksmart lovingly reveals what and who its protagonists have misjudged, and the ways in which fear has circumscribed their young lives. But they’re 18-year-olds with fake college IDs that enable them to use the local 24-hour university library—of course they’re naive. And their myopia, self-seriousness, and insecurities have thwarted them here and there. The beauty of a comedy set in high school is that we can acknowledge the characters’ fumbles, laugh indulgently, and also remember that they have time to figure out the way(s) they want to live.

The pivotal, shattering epiphany comes at the film’s beginning when Molly, using her school’s gender-neutral bathroom, overhears a trio of classmates mocking her for being a “butterface personality.” When Molly confronts them, she flings her academic success in their face—Yale-bound, she assumes that none of them will be attending a prestigious college—only to learn that one of them will, in fact, join her as a freshman in New Haven. Another will attend Stanford, and the third will head straight to Google to earn a “mid-six-figures” salary. Molly is thunderstruck, and unflatteringly lashes out at fellow future Yalie Annabelle (Molly Gordon) who has been branded “Triple A,” a slut-shaming nickname born from her habit of hooking up in cars. But Annabelle is serene in the face of Molly’s consternation. “I’m incredible at handjobs, but I got a 1560 on the SATs,” she coolly remarks.

In short order, the schema by which Molly organizes her life and justifies her choices—namely, devoting herself to stockpiling her curriculum vitae—explodes. She and Amy, who is headed to Columbia after volunteering in Botswana, considered scholarly pursuits and revelry incompatible—Molly simply hadn’t had time to party if she was going to be the youngest person nominated to the Supreme Court. But a shocking number of their classmates have seemingly managed both academic achievement and irresponsible amusement.

As others have observed, this notion of “doing both”—partying and gaining admittance into an Ivy League university—is singularly fraught, particularly as federal prosecutors investigate a vast college-admissions scandal in which parents, including Lori Loughlin and Felicity Huffman, paid for their children to gain admittance to esteemed universities. The San Fernando Valley, California, school that Amy and Molly attend evidently pulls from well-monied neighborhoods, and as we learn, its students are not merely attending elite colleges. They’re shelling out money for illustrious private schools: Harvard, Yale, Columbia, Stanford, Georgetown; it would be slumming it, apparently, to attend the University of California, Berkeley, the University of Michigan, or the College of William and Mary (yours truly may hold some special fondness for the latter). Community colleges and trade schools apparently do not exist in Molly and Amy’s world.

What little we know about Annabelle suggests that her parents did not help her cheat on the SATs: Booksmart encourages us to trust her and, eventually, prompts Molly to realize that she’s unfairly judged Annabelle for liberally engaging in and enjoying sex. That said, Annabelle is also white, drives an expensive car, and doesn’t seem to fear that smoking in a high-school bathroom will imperil her future. And while spitting her board score at Molly might be dialogic shorthand for a larger, robust set of academic qualifications, college admittance is now so savagely competitive that high SATs and honor-society memberships don’t guarantee acceptance to an Ivy League. However, at schools where legacies and endowments dazzle admissions committees, whiteness and wealth still count.

Booksmart lovingly reveals what and who its protagonists have misjudged, and the ways in which fear has circumscribed their young lives.

And though the girls refer to rich-kid duo Gigi (a glorious Billie Catherine Lourd) and Jared (Skyler Gisondo) as “the 1 percent,” it’s clear that Amy’s family also lives quite comfortably and, like most of the other students, she seems to enjoy the luxuries of cars and copious spare time to do with what she likes. In Booksmart, the only person who seems to have an “extracurricular job” is Principal Brown (Jason Sudeikis) who moonlights as a Lyft driver. The scene in which Molly and Amy discover him behind the wheel is hilarious—by the end of it I was near tears—but also exposes a dark underbelly, subtly condemning a culture with little interest in paying its public-school teachers a sustainable wage.

What’s peculiar is that though Molly lacks these niceties, the film calls no explicit attention to it. She lives in a Wes Anderson–pastel apartment complex, doesn’t own a car, and can only avail herself of the primo Student Body President parking spot by proxy. As Alison Willmore writes at BuzzFeed, “There’s a gap between Molly’s life and what we see of her classmates…But that gap is never mentioned out loud, which seems like a sizable omission in a movie that’s gratifyingly open—about sex, substances, and the stresses that can build up in a super-close friendship.” A touch of backstory—whether Molly lives strategically inside the school zone, what kind of relationship she has with her parents (they are even more absent than the adults in Peanuts cartoons), and how she plans to pay for a Yale education—would gesture to the economic pressures adolescents face, together with the hyper-emotional and bafflingly erotic crush of being a teenager.

In many ways, Booksmart models the high-school experience adolescents deserve: Amy has been openly lesbian since the 10th grade and nobody hassles her about her sexuality (Dever, by the way, is a sardonic delight, and I hope that we’ll see plenty more of her). School heartthrob Nick (Mason Gooding) is a person of color; this shouldn’t be notable, but it is as coming-of-age films remain overwhelmingly white. Kids are waspish here and there, but most of their barbs dislodge with relative ease. And unacceptable treatment is laid bare with gentle, empathetic insight: When Annabelle talks about the impact of her nickname, we bear witness to her experience of insidious, casual cruelty without didacticism or mawkishness. She is understandably defensive of her choices—it’s more convenient to mess around in her car without her parents lurking—but not apologetic. The worst part, she confides to Molly, is that the girls call her “Triple A” too—an articulation of how early internalized misogyny expresses itself. (Molly, though guilty of using the nickname, remarks to Annabelle that Amy has always refused to do so.)

Yet for the most part, experiences with sex are thrilling, effervescent, and adorably gawky—and neither they nor the girls’ romantic interests drive the narrative. With elegant clarity, Booksmart demonstrates how certain experiences can feel colossal and of walloping import even when we know we’re waiting for something else—something we can’t possibly fathom. Molly and Amy might dwell on their crushes, but they only ever claim to love each other. They revel in telling the other how beautiful she is and how she deserves the moon and the stars beyond. Their own love story is the one they most cherish and to which they most devote themselves.

But if Booksmart, with all its tenderness toward Generation Z, endeavors to make an argument for what youthfulness can be, and for all the messy hope entangled in it, then it must unearth the muck, too—and Wilde is seemingly unwilling to do that. In high school, I learned that friendship is salvation, but I also came to understand the torment and tension that necessarily accompanies relationships between people who are trying to love one another while being utterly confounded by themselves. The decision to mute the brunt of the fight Molly and Amy have in the middle of a raging party, to suggest that whatever they said can be blithely brushed aside—especially when it’s clear that slips of resentment have long festered between them—seems like a knee-jerk directorial decision that prioritizes maintaining an innocuous tone.

Moreover, a milieu in which capitalism is breaking our backs and our hearts demands accurate representation. I came of age blissfully inured to economic precarity, and I’m still beating back the impulses of my snobbish entitlement. I’m still, in my early 30s, learning the wider world. My sense is that adolescents today are more intellectually capacious and politically involved than I was, and they deserve films that represent the totality of what they endure. High school need not be garbage, but the world in which we live has long been fraying at the edges. We must learn to celebrate joy and potential without ignoring the threadbare tapestry enveiling us.