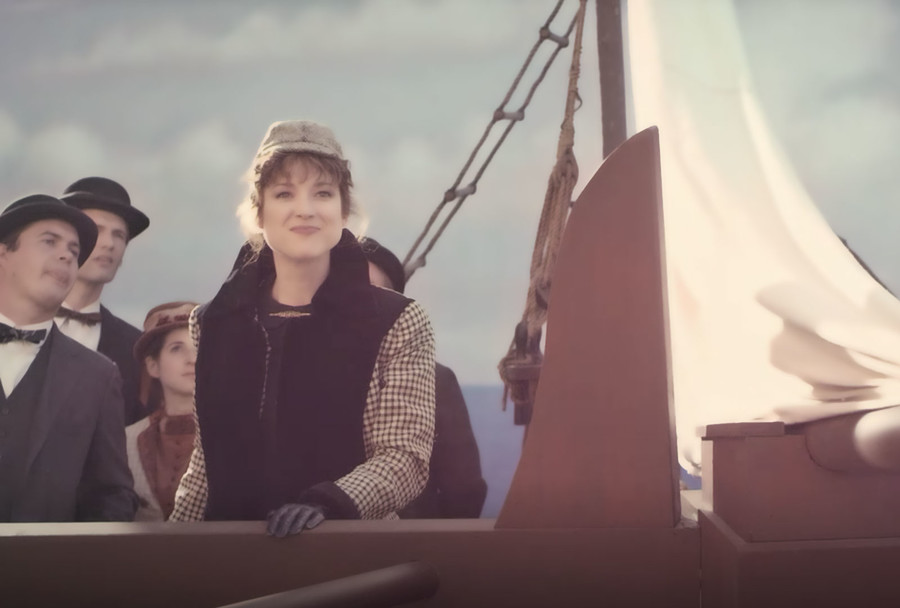 American reporter Nellie Bly was 25 years old when she began her race around the world in 1889. Her goal was to complete the trip faster than the characters in Jules Verne’s fictional Around the World in 80 Days, a feat that nobody had yet attempted in real life. Her trip was funded by the New York World newspaper, where she’d worked as a columnist for five years. Her employers knew that circulation would increase for the duration of her trip, giving them an edge over rival publications. This trip was the culmination of Bly’s unconventional brand of reporting, a now-familiar style in which she made herself the focus of every story. Without her presence, the stories wouldn’t exist, and so they could never be assigned to anyone but her.

Bly developed this unprecedented writing style as a way to overcome prejudice against female reporters. Until Bly’s tenure at the World, women writers were mostly limited to penning advice columns or reporting on social events. Bly’s career began when she wrote an anonymous op-ed criticizing an antifeminist column in her late teens. From then on, her focus was always on highlighting the stories of marginalized people—usually women—positioning herself as their advocate and establishing her name as a rising celebrity. Convention dictated that, like all women reporters of the era, she must write under a pen name, and so the woman born Elizabeth Cochran became Nellie Bly. She forged her own path, sidestepping her marginalization as a female reporter by presenting herself as neither woman nor person; she became a product, Nellie Bly: Girl Reporter, and the public adored her for it.

Refusing to remain sidelined, Bly turned her youth and gender into advantages her older male colleagues could not access. She gained her first scoop after spending a week posing as a psychiatric patient at Blackwell’s Asylum to expose their unethical treatment of patients. As a young white woman, she didn’t arouse suspicion when she went undercover in psychiatric institutions, hotels, or factories for her stories. She used the very characteristics that led people to underestimate her as her strongest weapons and means of success. She turned the very markers prohibiting her from embarking on a traditional (read: male) journalistic career into the crucial ingredients in a new kind of journalism.

Looking for a challenge, Bly first pitched the ’round-the-world trip in 1888. Her bosses refused the suggestion, assuming that a male reporter would be better equipped to take on the trip. But when, a year later, sales figures were slipping and Bly’s fame was reaching its apex, they finally relented and sent her on the assignment. With only three days for preparation, including registering for her first passport, Bly commissioned a new traveling dress and packed minimally enough to require only one small handbag. The image of her in a long checkered coat and Sherlock Holmes hat became instantly iconic, allowing her to be easily identified wherever she went—but still, crucially, she passed as a seemingly unthreatening, pretty, young white woman. Again, she turned her appearance into both a shield and a weapon.

An unanticipated side effect of her successful personal branding was that the public reaction to her adventure showed little concern for her personal safety. Bly recorded worries about missed connections and train derailments, but not of being robbed, assaulted, or killed. Since she presented herself not as a woman, but as a character, the public viewed the stakes of her trip mainly to be whether she could complete her mission in time, with little thought for the life-and-death implications of her journey. Bookies busily accepted bets on the date, hour, and minute of her arrival; the World promised a free European trip to the reader best able to predict her arrival time. A rival publication sent their own female reporter, Elizabeth Bisland, traveling in the opposite direction in hopes she would arrive before Bly. Bly’s editors did not inform her of the competition; she only learned of Bisland’s challenge, via word of mouth, midway through the trip.

Bisland, like Bly, was a young, middle-class white woman. Her employers provided Bisland with more funds than Bly, allowing her to bribe and upgrade her way to faster transport. Bly may not have had as many financial resources, but her charisma and celebrity encouraged ship captains and train conductors to travel faster than usual so they could claim some part in her victory. Both women’s routes were well advertised, further providing a sense of security. The residents of each city knew when and where to expect their arrival, and thousands of newspaper readers would know right away if either woman went missing or fell into trouble. Again, Bly’s self-promotion helped her sidestep many issues that would have plagued anonymous women attempting the same trip; she was seen by others not as a potential victim, but as a spectacle. Both women’s fame, youth, and whiteness allowed them access to modes of transportation unavailable to those who didn’t share these privileges, while their gender and attractiveness likely caused those they encountered to offer them extra assistance.

Bly returned to New York City to great fanfare 72 days after she’d departed—beating Verne’s fictional voyage by eight days. Bisland, who encountered some unlucky connections, would arrive four days later. Bly’s employers celebrated the increase in sales during her trip but continued to regard her as a novelty rather than a staff member. She was offered no promotion, raise, or bonus for her work. Perhaps her personal branding had been too successful in this way; Nellie Bly: Girl Reporter was valuable to the World only insofar as she increased readership. Bly herself was disposable.

Fame and status no longer provide women with the level of protection they did during Bly’s trip.

Shortly after her return, Bly resigned from her position at the newspaper. If she was to be a product, she would ensure that nobody else was making money off her. She launched a paid speaking tour to promote a memoir describing her experiences during the trip. When the World acquired new owners a few years later, they wooed her back with the salary and prestige she knew she deserved.

Fame and status, however, no longer provide women with the level of protection they did during Bly’s time. To travel as a woman alone today is still widely considered unwise, depending on the destination and route. For a well-known reporter to do so may bring with it an added level of danger from fans, those looking to profit off her exploitation, or worse. Italian artist Pippa Bacca was murdered in 2008 while hitchhiking from Milan to the Middle East in a wedding dress, on a trip intended to promote peace in the region. In 2011, South African journalist Lara Logan was beaten and raped in Egypt while covering President Mubarak’s resignation. And in 2017, Swedish reporter Kim Wall was murdered while researching a story onboard a submarine. The brash, naive optimism of Bly is now reserved for characters in fiction, as female reporters and travelers must venture with a more guarded affect.

Bly set out to break the record of a fictional character in a novel—and built her own reputation as a larger-than-life character along the way. Unable to dismantle the patriarchal system she was up against as a journalist in a male-dominated field, she nevertheless circumvented the system to achieve her goals: She made herself—and the voices she represented—too famous to be ignored.