The Brilliant Sadness of “BoJack Horseman” 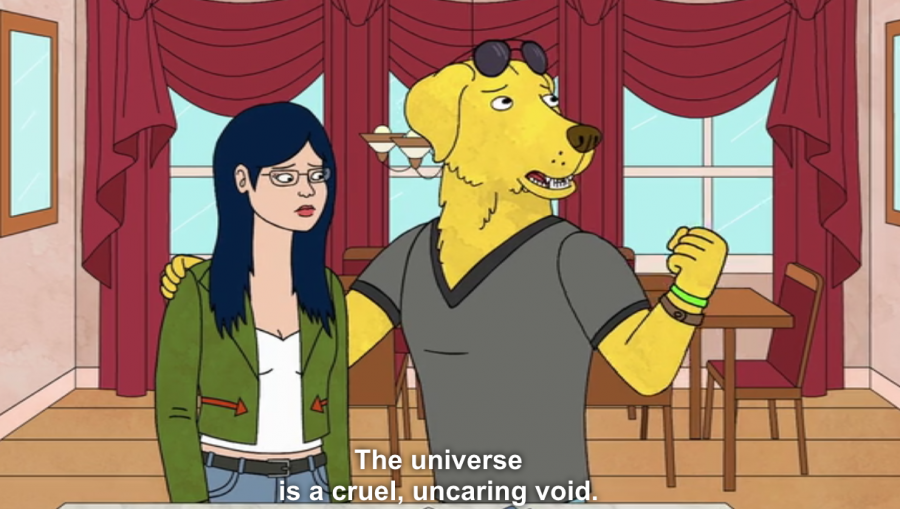 I put off watching Bojack Horseman for months. When the Netflix original show popped up in my recommended queue, I took one look at the description and clicked past it: “Meet the most beloved sitcom horse of the ’90s, 20 years later. He’s a curmudgeon with a heart of… not quite gold… but something like gold. Copper?” I’m just sick of shows centered on curmudgeonly rich dudes who whine about being misunderstood geniuses, get themselves into trouble, and are inevitably bailed out by women who put in untold hours of uncompensated emotional support (aka Larry David).

But I love the art of Bojack designer and producer Lisa Hanawalt, whose past work penning surreal comics about dog-girls and butt jokes have always made me laugh in a way I don’t quite understand. Eventually, I succumbed to the Netflix recommendation and watched the first episode. Immediately, I realized that I had drastically misunderstood the show. It’s not a series about a gang of eccentric friends bailing a depressed artist out of his problems. It’s a show about a gang of eccentric friends all falling deeper into their problems, sabotaging themselves into all-too-real isolation, and sometimes working up the courage to face their dark feelings head-on. Like many good comedies, the pumping, vibrant heart of Bojack Horseman is sadness.

At the center of the show is Bojack (voiced by Will Arnett), a horse who was a star two decades ago on a Full House-style sitcom called “Horsin’ Around.” These days, he’s a sad sack living in a modernist mansion. While Bojack ostensibly revolves around this depressed horse, the rest of the cast gets their due in this full-fledged ensemble show. In the bizarre universe of the show, humans and humanoid animals occupy a technicolor pseudo-Los Angeles, where the sky is often purple. Bojack’s friends and frenemies are an assortment of well-developed weirdos. Diane Nguyen (Alison Brie) is a journalist assigned to ghostwrite Bojack’s biography. But she has trouble pulling any honest details out of him—he’d rather represent himself to the world as a flawless success story than admit to his lonely reality. Princess Carolyn (Amy Sedaris) is Bojack’s agent, a pink cat clawing her way up the corporate ladder despite the incompetence of her bosses and the failures of her star clients. 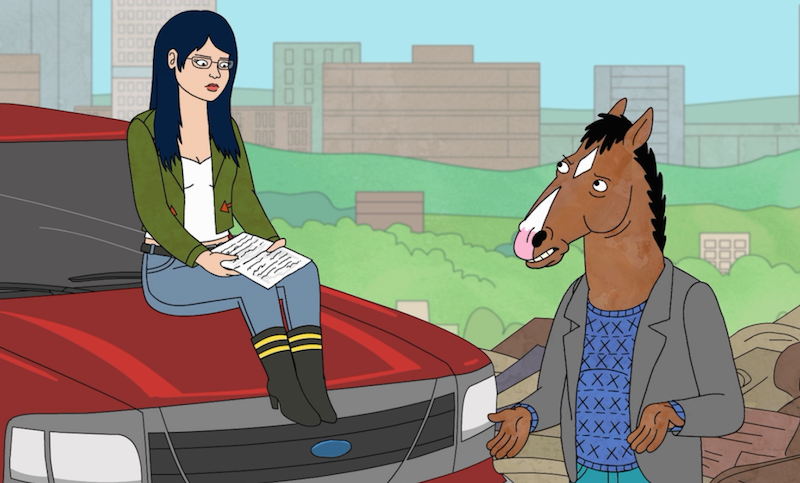 Diane Nguyen and Bojack discuss the ups and downs of his biography.

When I started watching Bojack Horseman, I was in the middle of a low time. It was winter. I had just gone through a breakup. I spent a lot of cold, rainy nights watching Netflix alone. Amid a slate of TV shows where story arcs are neatly wrapped up and protagonists come to upbeat epiphanies over the span of 30 minutes, Bojack is a soothing balm of darkness. The show doesn’t pull punches or gloss over problems with easy jokes. On traditional sitcoms, no matter how bad things get you know that the plot will tie up nicely, allowing producers to press the “reset” button before the next episode. Bojack refreshingly subverts this boiler plate narrative arc, making room for unexpected emotional complexity. Stories aren’t neatly wrapped up—instead, messes, problems, and disasters compound over the course of its two seasons. In one first season episode, a former child star voiced by Kristen Schaal engages in a series of destructive activities at Bojack’s house, one of which involves lighting his living room ottoman on fire. Rather than being swept away with the dawn of a new episode, that destroyed ottoman sticks around for the rest of the season, popping up as a charred reminder that shit doesn’t fix itself. There are dozens of poignant design details, mostly notably the permanently absent “D” from the famous HOLLYWOOD sign because, in a fit of ill-advised drunken desire, Bojack stole the letter. Instead of reinstalling the D, all the characters just start referring to their city as “Hollywoo.” The elaborate neglect required to accept repairable damage as permanent struck a little close to home for me. During my time watching first season of Bojack, my bed frame collapsed. Instead of repairing it, I moved my mattress to the floor and slept down there. This wasn’t just for a single night, this was several weeks of floor-mattress sleeping. Welcome to Hollywoo, everybody.

While Bojack is caught up in his existential struggles, both Diane and Princess Carolyn grapple with their own problems. In one of the show’s best scenes, Princess Carolyn wakes up after another night where her many talents go underappreciated and peps herself up with a little motivational speech:

“You gotta get your shit together. So yesterday you let yourself fall in love a little bit and you got your heart broken. Serves you right for having feelings. Starting now, you are a hard, heartless career gal. Go to work, be awesome at it, don’t waste time on flights of fancy. You are a robot. Blorp bop bleep bloop.”

This is the kind of line on Bojack that cuts deep. Feel like crying? Serves you right for having feelings. At my lowest times, it seems like the best way to approach the world is not to get incensed at all the ways it’s screwed up, but to simply shut down instead. While lying on my bedroom floor, not wanting to get up, not wanting to talk to anyone, not wanting to go anywhere, Princess Carolyn’s speech ran through my head. Go to work, be awesome at it. Blorp bop bleep bloop.

Of course, trying to pretend that feelings don’t exist doesn’t get you very far—it gets you through the day, at best. The characters on Bojack Horseman evolve nicely over the show’s two seasons. They don’t become stronger or better by fixing their flaws, but rather by admitting these flaws exist. Instead of suppressing their discomfort and failures, they learn over the course of 24 episodes how to open up, how to be okay with being a bit of a mess. In Diane’s story arc, she starts off as a classic over-achiever, driven into a successful journalism career in part to refute her family’s low expectations. But, just like anyone with feelings, she doesn’t have everything squared away. As her best-laid-plans unravel, Diane spirals into a dark place, loitering around Bojack’s house, amassing piles of beer cans, and lying to her husband. The only way to dig herself out of the rut is to do the hardest thing: to admit to herself that everything’s not okay. While Diane and Carolyn are able to improve their situation by eventually acknowledging their feelings and fessing up to themselves that they’re in a rough place, Bojack remains held back by his inability to admit that his life isn’t going according to his all-star plan. Instead, when he reads the less-than-glowing biography Diane has written about the egocentric nature of his life, he’s incensed to see himself rendered with such harsh accuracy. Unable to face his problems, Bojack remains trapped by them.

Television exists as entertainment. It offers access to an alternate world that takes us away from ourselves for awhile. At it’s best, it also reflects reality, illuminating things we didn’t realize were true. Instead of an opiate, it’s a wake-up call, albeit a gentle one that we can choose to ignore. After a month or so of sleeping on the floor, I admitted to myself that I was in bad spot. I got a new bed frame. I hauled my broken bed out of the house and, with the help of friends, chopped it up and turned it into firewood. Soon, we’ll have a party and set it on fire. We’ll waste a lot of time on feelings and flights of fancy. Later this year, the third season of Bojack Horseman will debut and I’ll be the first one to watch it.

Beautifully written. I think you captured what is best about the series. 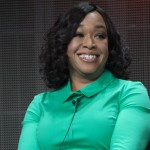