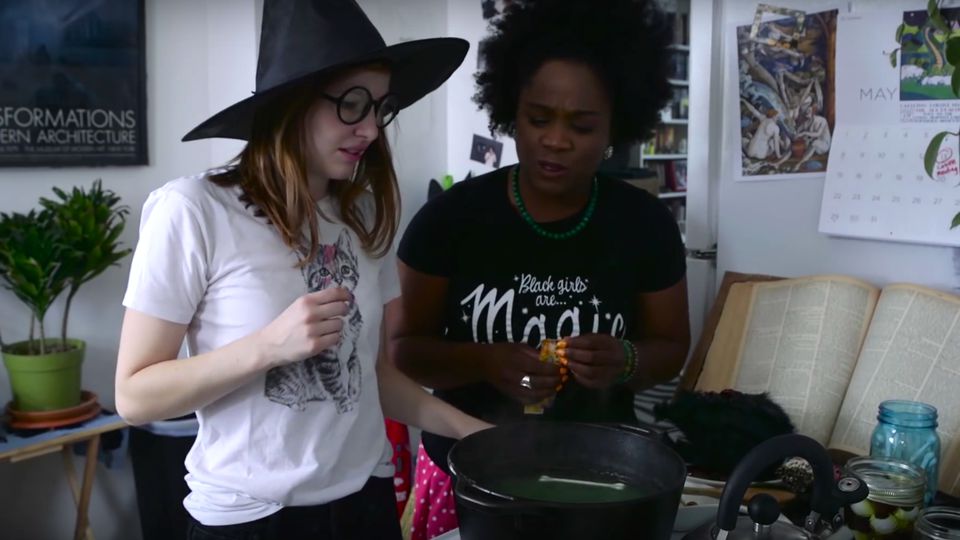 Billed as a “witch’s brew of comedy, camp, and commentary,” the five-episode web series Bwitches, cocreated by best friends/roommates Johanna Middleton and Martine Moore, tackles everything from dating to racial microaggressions from the perspective of two women of different races. The short first season makes a conscious effort to address social issues, but it also makes space to examine more mundane and universal topics like babysitting a bratty kid or going on first dates. The broad appeal of the show is both its specificity and its relatability. The plots that unfold are exactly the kinds of hijinks one assumes would ensue in the lives of two contemporary witches in the digital feminist age. In the first episode, one character concocts an invisibility potion to avoid creepy men and “soar over the patriarchy,” while in the finale, the other uses magic to rid her date of his “creepy baby hands,” courtesy of an actual baby. I spoke with Johanna and Martine about their inspirations for the series, the difficulties of funding indie media, and the way even well-meaning liberal men can bring women down.

CATE YOUNG: Has creating a web series always been something you wanted to do?

JOHANNA MIDDLETON: I wear many hats as an artist—actress, storyteller, teaching artist, community organizer—but all of my work centers on creating spaces for marginalized folks to share their stories and use their voice. I was so wary of creating a web series—I didn’t want it to be another waste of space—but then I realized that I had just as much of a right to take up space as any other narrative out there. Why not tell a story in that medium from my own perspective? That switch happened for me after seeing Issa Rae speak at a book signing for her memoir.

MARTINE MOORE: I am an actress and writer with a background in fiction writing. A year ago, Johanna suggested we have a weekly writing check-in in order to write more consistently. We both began thinking of ideas that would allow us to work together and perform. Web series are a great medium, with the potential to reach a broader audience than a short or feature, and can be shot on a shoestring budget.

How did you come up with the idea for the series?

JOHANNA: I’d always wanted to play a witch! I’m drawn to characters that are considered strange and “other” while also feeling powerful in that strangeness.

MARTINE: The witch theme was the perfect metaphor for women who are powerful and band together.  Once we started writing, I suggested we tackle our experiences as women and as a person of color, since we are always sharing stories with each other and thinking about how to create change through our work.

Bwitches is centered on the friendship of the two characters and is billed as an intersectional comedy. Does their friendship closely mirror your own? What steps did you take to make sure the episodes lived up to your politics?

JOHANNA: Yes, it does mirror our own; we really do live together and love each other. We’re close friends in real life, so a lot of what ended up in the scripts came out of conversations we’d had with each other about the ways in which we experience sexism. If you’re writing specifically, it comes up naturally. It was important to both of us that this be a specific representation of us and not a generalized one. Of course, we highlighted certain personal traits when creating each of our characters, attempting to make them distinct with separate journeys.

Are there any specific ways the show pushes against the assumption that female-created characters are necessarily autobiographical?

MARTINE: I didn’t realize that was a popular assumption! But I am happy to try to combat it. Were we to do more episodes, I think we could really stretch the characters; currently, you don’t get a lot of backstory. Of course, we’re in a heightened reality in which we have supernatural powers, so that’s a big distinction. Also, [my character] Maddie is much more laid-back than I am. You don’t see much anxiety or neuroticism, which are definitely present in my day-to-day life. She’s just a chill stoner witch!

How did you decide which issues you wanted to tackle in your first season?

JOHANNA: We based the issues on what was most immediately pressing in our own lives. Almost every situation came from a real circumstance.

MARTINE: “Natural-ass bitch?” happened. Creepy coworker hitting on me? Real life. Dad at home during babysitting? Yes. The challenge was to weave these events into a sitcom narrative and balance them with the high-concept witch theme. The tone we ended up with was tongue-in-cheek, goofy comedy with an undercurrent of occasionally biting commentary. We want other women to see themselves fully in this series, even if we’re wearing witch hats.

How has it been to fund and produce the series yourselves? Have you had to make any tough creative choices due to financial limitations? If so, what were they, and how did you get around them narratively?

JOHANNA: We originally had six episodes written but were only able to shoot five. I’m sure that there were more minor compromises along the way that now feel like the artistic choice we intended to make all along, like stealing locations. Episode four was written for a full-blown restaurant, which was out of budget, so we used a nearby taco stand instead—I can’t imagine that scene any other way now.

MARTINE: We undershot initially when we picked a fundraising goal. We ran a successful campaign, but the money we raised turned out to be insufficient to shoot all of the original six episodes. We were green showrunners and did not have a clear enough conversation with our director and producer going in. It was incredibly frustrating to come out of the other end of an exhausting campaign and to realize we were short.  Ultimately, we plowed ahead and were able to keep an ambitious shooting schedule of five episodes in five days. With the exception of episodes four and five, which were originally one long episode, the stories are not connected, so we didn’t need to repair any narrative holes after cutting six. I’m sorry we didn’t get to shoot it though—it was about periods! We are both fans of the “demystify women’s bodies and bodily functions” movement.

Are there any current plans to create a second season or finally film the sixth episode?

JOHANNA: We’re not ready to fundraise again, so for now, Bwitches is on hiatus, but I’m certainly open to another season—which could include that sixth episode—in the future.

One of my favorite aspects of each episode is the hand-drawn credit sequences. Was creating them a financial decision, creative choice, or both?

MARTINE: Thank you! I did those. It was somewhat financial; we thought about an animated opening sequence that would require a professional, but ultimately it didn’t make sense to pay someone for something I could do myself, and we wanted the opener to be short and sweet, since the episodes are only about 5 minutes long. I drew the Bwitches logo when we started fundraising for the project and expanded on that style for the title cards and credits. I have been drawing little cartoons for years, usually on cards that I give to close friends and family. These are all watercolor and ink.

I loved that episode two tackled racialized microaggressions. Did you have any trepidation dealing with that issue? How did you decide what scenario to center the situation around?

JOHANNA: I felt a lot of pressure to “get it right.” At the same time, this was the episode that felt most necessary to make. I was excited to deal with the issues since they reflected my particular frustrations as a Black woman, but there was a lot of conversation surrounding whether or not it would actually be funny or just difficult to watch. I showed a rough cut of the episode to my dad, and he was like, “This just makes me angry.” Ultimately, the episode seemed to really resonate with viewers. The scenario came from the countless times we’d both been in that situation in real life. Some of the lines were verbatim from readings we’d attended or conversations we’ve had with guy friends. We’ve quite often been the only female in a room of male collaborators and struggled to be heard or taken seriously. Even if you’re not in the entertainment world, I think any woman can relate to being around male peers and experiencing these sorts of microaggressions that subtly seek to silence women.

MARTINE: What I like most about this episode is that we call out the discrimination we’ve faced from men who we’d consider friends and peers—[people] who are well educated, liberal, and seemingly enlightened. Much of the prejudice women face today occurs in an insidious, hard-to-point-out form. Of course, in the episode, it’s all drawn to the surface and heightened, but in a manner we hope rings true.

How closely did you work together to come up with scripts and story ideas?

JOHANNA: Since we live together, we were always bouncing ideas back and forth. A lot of the [inspiration] for episodes came from conversations about our days—taking stories we’d told each other and putting them in the script. We divided the scripts up and then worked on them together, passing them back and forth.

MARTINE: Toward the end of the process, we sat in a room together and hammered out line-by-line dialogue. We workshopped them like mad, too: A few group reads and notes from friends in the business and our wonderful producer Rachel Sklar were instrumental in helping us get them tight, concise, and consistently funny.

Earlier, Johanna cited Issa Rae as an inspiration for giving herself permission to take up space, and Issa’s new show Insecure is finally premiering this year on HBO after she started with a YouTube web series. Do you hope to follow her career trajectory with Bwitches, or do you already have an idea for how you’d like to see your career progress?

JOHANNA: Issa’s had incredible success that came from creating a lot of content beyond Awkward Black Girl on YouTube, and I plan to continue to create online content beyond Bwitches. I am currently working on an interview series that will be featured on my storytelling group’s YouTube channel. We’ll see where continuing to create content takes me. Of course, if HBO wants to make Bwitches a show, we won’t turn them down.

MARTINE: I definitely hope to continue to write for myself throughout my career and to continue to create work like Bwitches that contains sociopolitical commentary. Whether or not Bwitches is the meal ticket, I would certainly love to follow in Issa’s footsteps of writing for a bigger platform and telling her own stories. And I hope to continue working with Johanna, of course.

This interview has been edited and condensed.