by Gretchen Sisson and Steph Herold 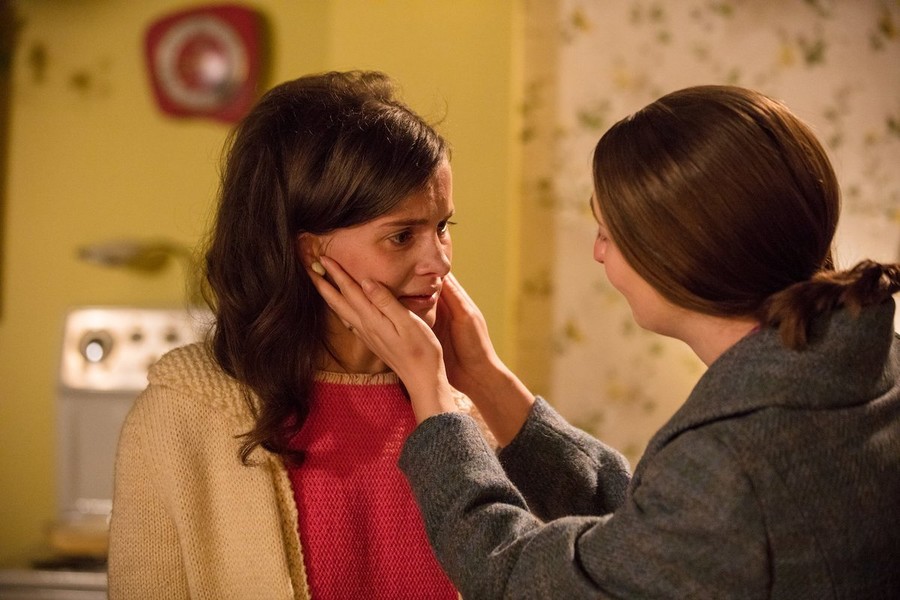 Over the past eight years, the critically-acclaimed British period drama Call the Midwife has filled a unique role as one of very few TV dramas to focus nearly exclusively on women’s stories. The show chronicles the lives of the midwives, nurses, and Anglican nuns at the nursing convent Nonnatus House, as well as their patients in Poplar, a poor neighborhood in London’s East End. Set in the 1950s,  the show uses the real-life post–World War II baby boom as a way to flesh out the topics of pregnancy—both wanted and unwanted—childbirth, miscarriage, stillbirth, and abortion, among many others. Week after week, Call the Midwife has shined a light on the overlap of poverty and pregnancy to widespread critical acclaim. Yet it displays surprisingly little of its characteristic complexity when it comes to abortion.

The series’s eighth season concluded on May 19, and with it the season-long arc about an illegal abortion provider working in Poplar to address—as Jenny (Jessica Helen Lloyd), the show’s narrator, says—“the things of which we do not speak.” In fact, Call the Midwife has often spoken of those things: Past seasons have included storylines about attempted self-induced abortions, or a medically indicated abortion performed before the procedure was legalized in Britain. And while it’s essential that such stories be part of a narrative focused almost exclusively on women’s reproduction, Season 8’s arc perpetuates ahistorical stereotypes about illegal abortions that ignore the complicated—and sometimes politically inconvenient—reality that such procedures can be, and often were, done safely.

In her 1995 book Doctors of Conscience: The Struggle to Provide Abortion Before and After Roe V. Wade, sociologist Carole Joffe interviews physicians who provided what she calls “responsible illegal abortions” before the procedure was broadly legalized in the United States and Canada. Whether they facilitated referrals to legitimate providers, completed mismanaged illegal abortions, or performed procedures themselves, the providers Joffe interviews emphasize that these actions were not “courageous”—they were their ethical obligation as physicians. Joffe analyzes the various practices and motivations of these physicians, some of whom provided clandestine abortions only for their own patients, others who provided to anyone who was in need.

The stories in Doctors of Conscience have all the stuff of compelling TV drama, from standoffs between compassionate providers and hospital bureaucrats to providing safe illegal abortions in a church-affiliated clinic. Other scholars have documented the history of reputable illegal abortion providers, questioning both pop culture and social-movement tropes that create a dichotomy of unsafe/illegal abortions and safe/legal abortions. Unfortunately, Call the Midwife ignores this history, instead reinforcing simplistic stereotypes about the crude, unsanitary practices of untrained providers.

Over the course of the season, the Nonnatus House midwives work with three women who, it’s revealed, have visited the same illegal abortion provider, with disastrous results: Cath contracts an infection after her procedure that necessitates a hysterectomy; Jeannie dies as a result of a similar infection; and Theresa hemorrhages and is rushed to the hospital, where she nearly dies. These stories are consistent with our own previous research on pop-culture representations of illegal abortion, which found that television uniformly presents it—regardless of context—as extremely physically risky and often deadly.

In the penultimate episode, Call the Midwife reveals that the illegal provider is midwife Valerie’s (Jennifer Kirby) own loving grandmother, Elsie (Ann Mitchell). Elsie is performing the procedures safely, but she’s also unknowingly the carrier of a dangerous infection that spreads to her patients. Elsie passionately defends her practice, believing her granddaughter will understand why their community needs an abortion provider; she assures Valerie that she’s performed dozens of abortions with no complications; and she is clearly horrified to learn that she has put women in danger. When Valerie accuses her grandmother of doing this work for the money, Elsie protests by burning the money she’s received as payment—only to have Valerie coldly accuse her of destroying evidence. Along with her fellow midwives, Valerie reports Elsie to the police and goes on to successfully testify against her.

A loving grandmother performing abortions for desperate women in her community stands in direct contrast to most televised depictions of illegal providers.

This loving grandmother performing abortions for desperate women in her community stands in direct contrast to most televised depictions of illegal providers. At best, providers are invisible; on Good Girls Revolt and Alias Grace, characters simply shuffle in and out of their practices. At worst, illegal providers are maniacal charlatans who use medieval instruments to torture their patients (e.g., American Horror Story: Hotel, Penny Dreadful); and we often see the results of an illegal provider’s work—a woman who is no longer pregnant but severely injured or dying (e.g., Miss Fisher’s Murder Mysteries, The Knick, Upstairs Downstairs). The occasional safe illegal provider does come across the small screen—The Knick’s Sister Harriet (Cara Seymour), Boardwalk Empire’s unnamed doctor—but they are portrayed as reluctant, only consenting to perform procedures because they believe patients are at risk if they do not.

Elsie, on the other hand, comes across as a compassionate caretaker who has been providing abortions for the women of Poplar for years without incident—but Call the Midwife shows only the patients she unwittingly harmed. No grateful past patients come to testify on her behalf, because doing so would be confessing to a crime. Elsie herself seems to have a change of heart about her illegal work during her trial, a puzzling turn of events given her fervent insistence on being the most reputable, caring, and affordable provider in Poplar. In Elsie and Valerie’s last onscreen conversations, Elsie encourages her granddaughter to take on the social problem of unsafe abortion, saying “Until you girls sort something out, there will be names being whispered and money changing hands.” She’s right, of course—but Call the Midwife’s complete condemnation of illegal provision makes it difficult to see how the show might explore such work in future seasons.

The very real possibility that abortion may again be illegal in the United States makes it crucial to interrogate the conventional wisdom that links legality with safety and to understand pop culture messaging about that link. To date, TV has told only a small, self-evident part of illegal abortion’s history: that it can be unsafe when performed by an unskilled person with objectionable motives. Call the Midwife and other historical dramas rewrite history to portray illegal abortion as a uniformly harrowing practice and omit narratives of compassionate, safe providers.

As we look toward a future where definitions of legal abortion become increasingly narrow, onscreen storytellers have a chance to reexamine this relationship with more nuance; less coat-hanger sensationalism; and a reminder that the work of abortion has always included the complex stories of providers whose illegal work was done with humanity, ethics, and care.