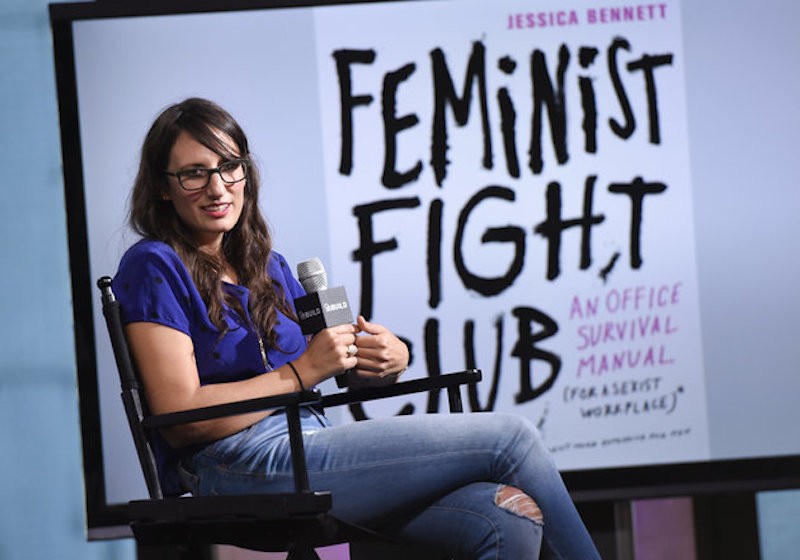 Friends often text me about frustrating stuff that happens to them at work. Their boss talks over them, their coworker dismisses all their ideas, their lab mate takes all the credit for himself. How do you deal with that stuff? I rarely have good advice, but it’s always nice to have someone just listen and commiserate.

Writer Jessica Bennett has her own version: a low-key meetup of female friends who called themselves the Feminist Fight Club. They would meet once a month for drinks and snacks in someone’s apartment and talk about the annoying situations they’d dealt with recently, offering each other tips, cheering each other on, and, of course, drinking a fair amount of wine.

That spirit of banding together to commiserate and push for change is the basis of Bennett’s brand new book, Feminist Fight Club: An Office Survival Manual for a Sexist Workplace.

The book is funny and light-hearted—it’s full of drawings and pie charts illustrating everyday douchebags and sexist encounters. But it’s also pretty real—a lot of it deals with naming casual sexist behaviors, like people interrupting you or assuming a woman could not possibly be the person in charge, for what they are. I found it cathartic to read, and now I have something to gift to those friends who find themselves carrying the burden of frustrating office dynamics. 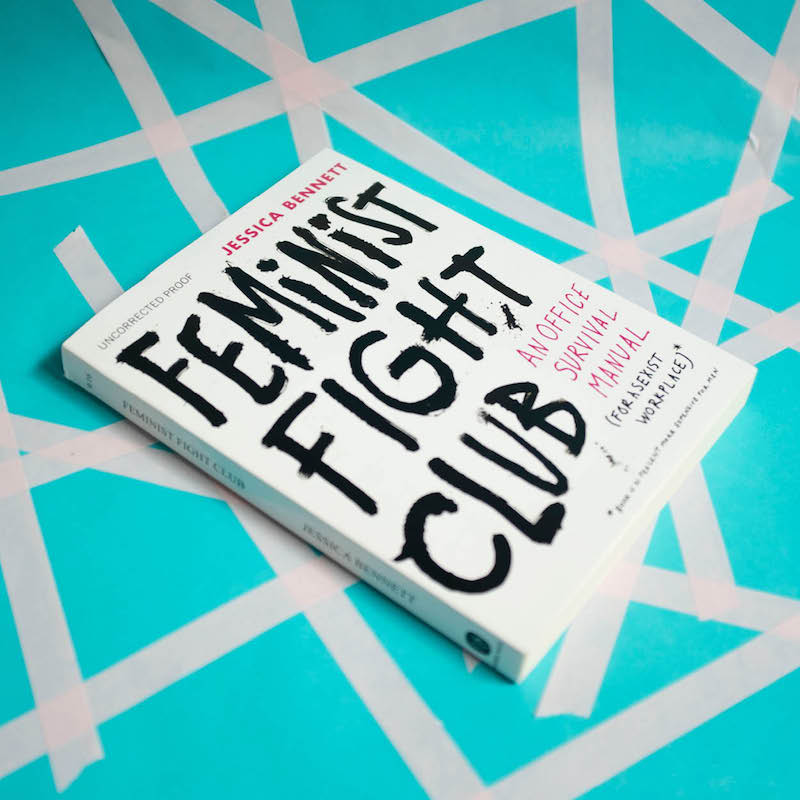 SARAH MIRK: You start out the book talking about your experiences working at Tumblr. I think that’s a really concrete story that a lot of people could see themselves reflected in. Can you talk to me about how it was cool to work there, but you realized there were sexist dynamics going on?

JESSICA BENNETT: I began my career at Newsweek, which is relevant to this because when I left Newsweek, I was so tired of old media and was thrilled to be offered this job at Tumblr, a new media platform launching a new journalism project. I was very excited, and Tumblr was a cool, hip place to be working. People brought their dogs to work, and there were free snacks, more snacks than you could ever imagine that you could just eat all day for free, which was very exciting to someone coming from the journalism world. But I began to realize that most of the people working there were men, and even though I was supposed to be relatively in charge, people would look to the men when I spoke anyways.

What kind of specific dynamics did you see at Tumblr that felt maybe normal at the time but later you realized gender played a role?

A lot of the stuff today is so subtle. It’s not that there were overt forms of sexism happening, but certainly there were a lot of dudes looking at a lot of GIF porn in the office and things like after-work beer pong. The most overt thing, which I don’t think I realized until later, was that when I began the job, I was hired along with a male editor. We were going to be coeditors, and we were both reporting to the CEO. They told us we could choose our own job titles—this was going to be very egalitarian, very tech world. But then when I arrived on my first day, they told me that Chris, my counterpart, had chosen the title of editor-in-chief. And anyone who works in journalism knows that’s the absolute highest title you can hold. There was really no recovering from that—I could choose the title of Executive Editor, but that still came below his title. So what began as a job where I would be doing it with another person in tandem became me reporting to someone.

This wasn’t his fault; we were both told we could choose our titles. He, in fact, was a wonderful guy and boss, but it sort of felt like I [had] been sneak-attacked with a boss and that boss was a man.

A lot of people of all genders don’t necessarily see sexism and racism and other forms of discrimination occurring because they’re often subtle. A big thing you talk about in the book is casual sexism. It’s rare to have someone overtly say, “Women shouldn’t be bosses!” or “Women should make less money!” But instead, sexism creeps in. In writing your book, what tools were you trying to give people to navigate that casual sexism and discrimination?

So even with that Tumblr scenario—Chris actually wrote a piece a couple weeks ago about it. Before the book came out, I had approved the language with him and told him I was going to be writing about it. I don’t think that he had, in fact, inferred that he was going to be the one in charge. He chose that title because of course he would choose that title; he assumed he was going to be the editor-in-chief. He wrote this piece about how, as a white man, he assumed he was going to be in charge. I, on the other hand, hadn’t assumed I would be in charge and, given the option, probably wouldn’t have chosen that title because I would have assumed I wouldn’t get it. So a lot of this is really unconscious behavior. In his case, he’s a wonderful human and a feminist, but some of these things are so embedded in our psyches and our culture, it’s very unconscious. Part of the tactic to overcome this is calling out this behavior in the first place. So in the book, I’ve given these titles to these behaviors: manterruption, when a man interrupts a woman; bropropriation, when a man appropriates a female idea. The idea is not to call out every man for being an interrupter or every man for stealing ideas, but to put titles—fun, easy to roll off the tongue titles—to behavior that statistically has a pattern. Not every man is an interrupter, and not every interruption is [from] a man, but women are twice as likely to be interrupted in a workplace context. Not every man steals ideas, but research has shown that both men and women are more likely to assume that good ideas come from men. So how do you overcome these things? The first step is you realize they’re a problem and that both men and women exhibit some of these biases. 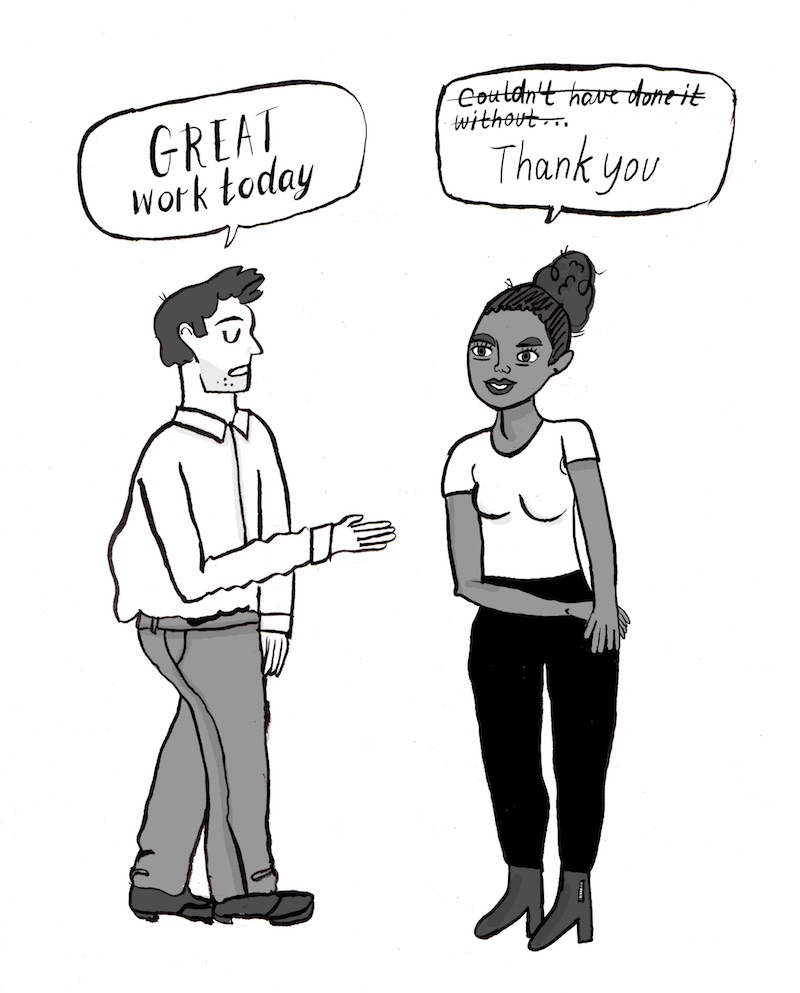 What behaviors are you still working on yourself?

I was in a meeting recently and a man and a woman came in, and I instinctively assumed that the woman was junior to the man. And she wasn’t; she was the man’s boss. I caught myself in that moment and thought, Oh shit, I just did that thing. I do a lot of these things. Some of them are traps that I fall into myself, like apologizing before I speak or having trouble taking a compliment. You know, I’m on book tour right now, so I’m getting a lot of congratulations from people on publishing the book. My first instinct is to say, “Oh, well, it’s not a big deal. I couldn’t have done it without so-and-so, this person deserves the credit.” While a lot of people did help tremendously with this book, I still wrote a fucking book. I should be able to say, “Thank you.” I think that part of the challenge here, even those of us who are the most well-intentioned and call ourselves feminists, can fall into these things.

When you realize something sexist is happening at work, it’s usually a really tricky situation to address. Personally, it feels really awkward. I usually don’t want to make a big deal out of it, but also it needs to be addressed. A lot of the onus here is put on women to change our behavior—it’s on us to negotiate better, to speak up for ourselves, to really fight for promotions. But what can we do to get the people who are in power to change THEIR behavior? What advice do you give to dudes, to white people, and to other people who are typically in majority positions in an office for checking themselves and thinking about the dynamics in the room?

That’s a really big challenge. A lot of the research and advice out there does put the onus on women to change their behavior. It’s not like any of this is women’s fault. We have lived under a patriarchal structure that teaches women to be ladylike or not ask for money or not be too braggy, when the opposite of those things are required in the modern workplace. The onus shouldn’t be on women, we shouldn’t HAVE to change our behavior, but the reality is that we still live in a very white male–dominated world. There are things men and people in positions of power can do to help. Throughout the book, I try to give concrete, small advice for things people can do on the daily. For example, if you see a woman being interrupted in a meeting, you can interrupt the person interrupting her and say, “Hey, can you let her finish?” so she doesn’t have to look like a “nag” for saying, “Hey, I’m not finished.” So often, people’s ideas are not correctly attributed. So if you see that happen, you can jump in and bring the credit back to the person where it originated. You can do things like, if you’re in a hiring position, for every white man you interview, you need to interview an equal number of women and people of color. If you can’t find those candidates, you need to look harder. There are some things we can do daily as we face these struggles, but we also need to fight for larger structural issues like equal pay, paid parental leave, and raising the minimum wage. The tools that I try to provide are the kind you can keep in your back pocket and deploy at any time. But it needs to come from all sides, from top down and from the bottom up, from every side and every which way. Men need to be involved, those in power need to be involved, companies need to care [about] these issues, and those of us who are facing this need to have tools to fight back against it.

A longer interview with Jessica Bennett is featured on our newest podcast episode, “Navigating Workplace Patriarchy.” 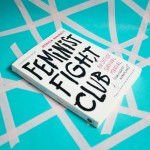