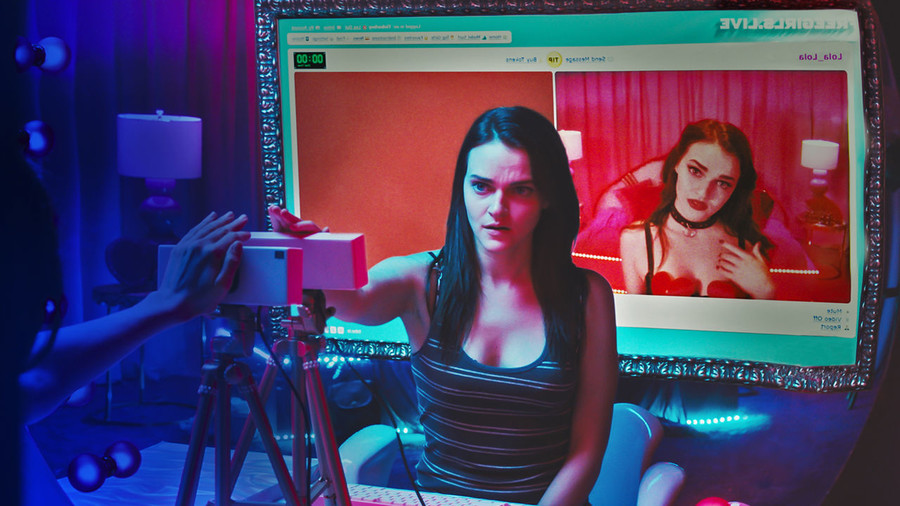 Daniel Goldhaber’s Cam is the story of a sex worker determined to maintain her independence in a world that both thrives on and marginalizes her labor. This core narrative is enhanced by horror elements that emphasize the intensely personal nature of cam work, as well as the built-in dangers of men being the primary consumers. The film walks a tight line between reality and fiction, landing somewhere in the middle by reaching real societal truth within its deft genre trappings.

When the film begins, Alice (Madeline Brewer), a cam girl struggling for financial independence, is number 62 in the rankings of her cam-girl site, and trying to crack the top 50. The film does a great job of illustrating the mundane parts of sex work; it presents camming as part performance, part customer service. On the clock, Alice is Lola: an incredibly cute dream girl, living happily in a pink, plush paradise. Her studio vibrates with pink neon lighting. There are large stuffed animals in the background, and she has a giant chest full of adorable sex toys with names like “little baby bear” and “big papa bear.”

We meet Alice-as-Lola as she apologizes to “her guys” for being late because she had to pee. Her persona is bubbly and sweet, and whatever flaws she has are charming. She’s wearing cute underwear and a small letterman jacket that strategically covers her breasts, and she mentions that she doesn’t know how to do her makeup. Lola is all about suggestion, allowing “her guys” the freedom to imagine what it would be like to be with this kind, helpful girly-girl who just happens to provide sexual content. Even referring to customers as “her guys” reveals a lot about how Lola wants them to see her. The men who watch her videos are essentially a group of admirers, all trying to figure out which box of chocolates might be big enough to woo her. But Alice knows it’s all a game.

Just as things are looking up for Alice, another Lola appears out of nowhere. She steals Alice’s account and starts camming nonstop. Fake Lola—also played by Brewer—looks like Alice, but her approach to camming is eerily different. She’s more overtly sexual and submissive, with less artistry and personality. She does wild things like cam in the library, making Alice’s “guys” believe that Lola is doing risky shows in public. She has personal items that Alice has never revealed in her shows. A scene late in the film when Fake Lola shows off a photograph of Alice’s brother Jordan (Devin Druid), is especially horrifying. Cam lends from the horror legacy of female doppelgängers (displayed in films like Brian De Palma’s Sisters), using Fake Lola as a more sexual, dangerous mirror image of Alice.

Brewer is excellent in her dual performance as Alice and Fake Lola, expertly creating slight mannerisms that allow viewers to identify the real and the manufactured. Fake Lola is essentially the Stepford version of Lola—perfectly manicured, flawlessly made up, vacant, and ready to take commands from “her guys.” Alice, in turn, looks out for herself and sets boundaries. Her physical movements are less graceful. And she allows the cute-girl veneer to crack—especially once she realizes that no one will help her. The script, written before Deep Fake technology was popularized, accurately constructs the real fear that comes with realizing how easy it is for someone to steal your identity. Brewer volleys effortlessly between terror, fascination, and righteous anger.

Alice’s struggles highlight the isolating nature of sex work, and it’s harrowing to witness her try to defend herself and protect her career. The cam site’s tech support is no help, and neither are the police. In a world where internet regulation and law enforcement work directly to harm sex workers, it’s difficult for them to maintain basic workers’ rights. Alice is dealing with identity theft, so it’s logical for her to think that someone would help her. But the systems that are in place create a situation where sex workers are forced to go around the law or risk losing their income. Cam reminds us that choosing between safety and employment is not a choice that sex workers should have to make.

When I conducted a Q&A for Cam at the Alamo Drafthouse in Brooklyn last month, my first question for the filmmakers was about the ending, in which Alice returns to cam work with a wig, a new set, and a new name: Evebot. Screenwriter Isa Mazzei quickly replied with her own question: Why is it so difficult to believe that Alice would go back to her job? Many people face obstacles in their professions, and we don’t question them when they push past them. We’re socialized to talk about sex work as if it’s a last resort, and seem to have trouble understanding why someone would choose sex work as a career simply because they like it and have a knack for it. Mazzei’s question rightfully made me reevaluate my line of thinking.

And the truth is that Alice is amazing at camming. She has a flair for costumes, set design, cinematography, and dramatic structure. Alice’s work is not unlike that of a filmmaker: With her Lola persona, she crafted both a character and a fantasy world, and what’s more cinematic than that? I’m sure Mazzei, a former cam girl herself, would agree: In an interview for Paper magazine, she points out that the film was based on real parts of the cam-girl world, from the site to the sets, with everything heightened to engross viewers: “I think that by getting an audience inside Alice’s head and having them root for [her], they’re empathizing with a sex worker in a way that’s actually pretty subversive.”

Cam, much like 2017’s Get Out, is a reminder of horror’s potential for fostering awareness and understanding. And it works—we root for Alice all the way to the end.

Read this Next: Word Travels 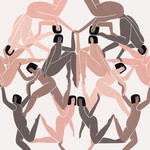 by Chanelle Gallant
Many “respectable” women are discovering the strategies that sex workers use—which are actually the same ones used by all women outside the charmed circle of privilege.