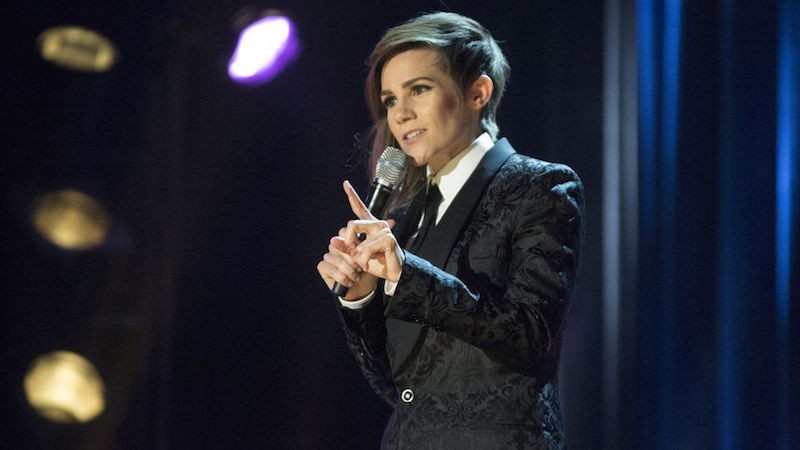 Cameron Esposito’s new hour-long stand-up special, Marriage Material, was filmed in her hometown of Chicago just two days before her wedding to fellow comedian Rhea Butcher. The entertaining special, which is available from online platform Seeso, raised some questions for me. Questions like, “Who is the foremost lesbian comedian?” Answer: It is Cameron Esposito, according to a Google search of the terms “lesbian comedian.”

I mean, obviously in terms of overall fame or wealth or influence, it is Ellen DeGeneres. But for younger people and heavy internet users and people who would consider themselves fans of stand-up comedy, I believe (and Google believes) it is Cameron Esposito. Her other accomplishments include an upcoming Seeso original series with Butcher called Take My Wife, a weekly standup show at Upright Citizens Brigade in Los Angeles called “Put Your Hands Together,” and a prolific number of live stand-up performances around the country (I’ve seen her live twice). Esposito’s presentation is polished and strong—she’s super charismatic and manages to veer between intimate and boisterous in her manner, so that the audience feels like they’re being let in on a secret that Esposito expertly builds as she steers us toward the punchline. Unlike many comedians, Esposito draws humor from playing up an arrogant and confident persona, rather than being self-deprecating.

Much of Esposito’s comedy centers around her experiences as a lesbian. She frequently jokes about her teenage years in the Midwest before coming to terms with her identity, perceptions of gay people by straight people, and her very gay hairstyle (which she refers to as a “side mullet”). Many of these jokes rely on lesbian tropes and clichés (being secretly in love with your high school best friend, the exquisite pain of being on a high school swim team), but they manage to remain charming and compelling because Esposito is so charismatic and likeable. She also jokes a lot about sexism and feminism and her experiences as a woman. One of the bits in Marriage Material that’s brought her a lot of Internet notoriety is a joke about periods in which Esposito begins by explicitly acknowledging that period jokes have been historically off-limits for female comedians, and ends by shouting the line, “Chunks of my body are crushed out of my body by my body!”

Marriage Material is mixed bag in terms of meeting the high standards Esposito has set over the years with her consistently hilarious performances. Esposito clearly cares a great deal about politics and sees her comedy as an opportunity to speak out about the political issues that are important to her. The weak moments in this special occur when she veers a little too far in the direction of preachy and loses some of her edge as a comedian. Of particular note is a bit about halfway through the special focused on gun ownership and gun rights, in which she doesn’t really say anything more interesting than, “I will not be getting a gun. I don’t think we’re doing a great job with the ones we already have.” The only actual joke in here is something about how real hunters should be using their bare hands, and the fact that you can’t accidentally kill yourself with a knife. The rest is a pretty earnest rant about her opinions on gun ownership that, while garnering hoots and hollers from the supportive audience, falls pretty flat from a comedic standpoint. This bit encapsulates Marriage Material’s biggest weakness: Esposito is preaching to the choir. Most of her fans are politically liberal, middle-class white people, probably women, maybe queer. They’re already on board about gun violence. She isn’t pushing any envelopes with this one.

Which brings me to another question Marriage Material raised for me: “What is the role of comedy in social justice?” Comedy can push boundaries for people, forcing them to confront or consider the absurdities and injustices of everyday life in the hopes that when they go home, they’ll see things a little bit differently. When she’s performing for people who are already there to cheer her on, Esposito’s comedy isn’t pushing boundaries. She’s telling jokes that everyone in her audience already agrees with. But that’s only part of the picture. Comedy also acts as a pressure valve, providing a safe space for people who experience microaggressions and misunderstanding on a daily basis. Comedy is a place to feel a sense of community, a shared experience around their oppressed identities through humor. This is where Cameron Esposito’s comedy excels for feminist comedy fans. As the internet's foremost lesbian comedian, she helps make a comedy scene that feels welcoming to more people. When Cameron Esposito is running the show, no one’s going to make an unsavory rape joke and the crowd will laugh as hard as I do at her messy, gory period jokes. In exchange for that, I’ll happily forgive the boring stuff about guns.

Could someone explain the appeal of Cameron Esposito to me? I tried to listen to her newest album and couldn't really get into it. It just sounded like the only aspect to her life was her sexuality, yet she continues to be hyped up by almost everyone. 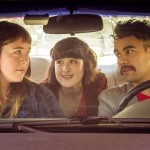 by Ashley Ray-Harris
Afternoon Snatch offers a world where nonbinary characters aren’t defending their right to exist, but simply are.