A Cap and Gown in the Strawberry Fields | Bitch Media

A Cap and Gown in the Strawberry Fields 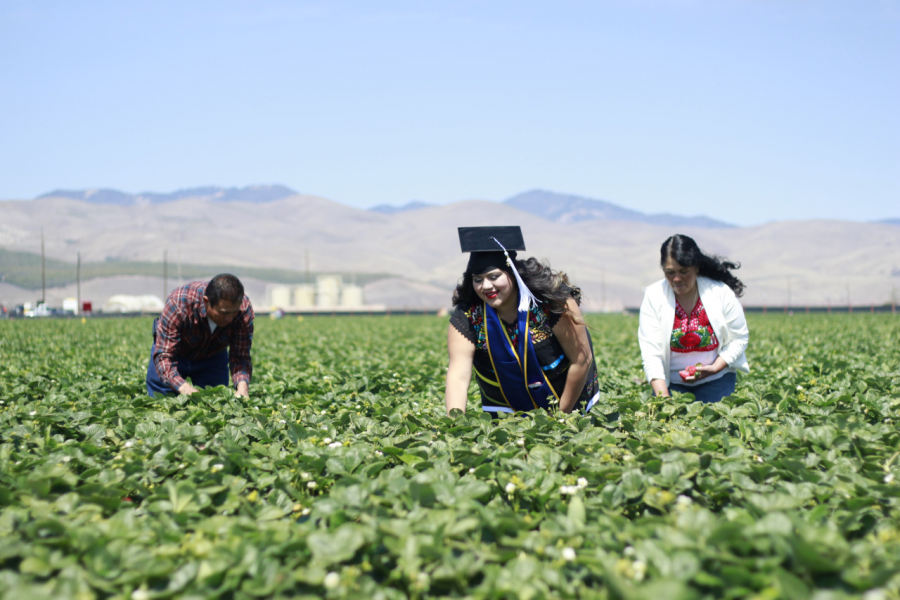 While the mainstream media is busy giving Donald Trump a platform for his bigotry and making El Chapo prison escape memes, the stories and experiences of real Latin American people continue to be overlooked. I came across a short but powerful Tumblr post several weeks ago that eloquently and concisely crushed stereotypes of Mexican immigrants and farmworkers.  In the photoset, 22-year-old Eunice Gonzalez stands proudly in a strawberry field in California, decked out in a UCLA graduation cap and gown. Her parents stand close by. In a short caption, Gonzalez explains that she's a first generation college student who just completed degree in Chicano studies, with double minors in gender and labor studies.  Her family hails from the richly diverse city of Oaxaca, Mexico and she is the only U.S. citizen in her family of five. 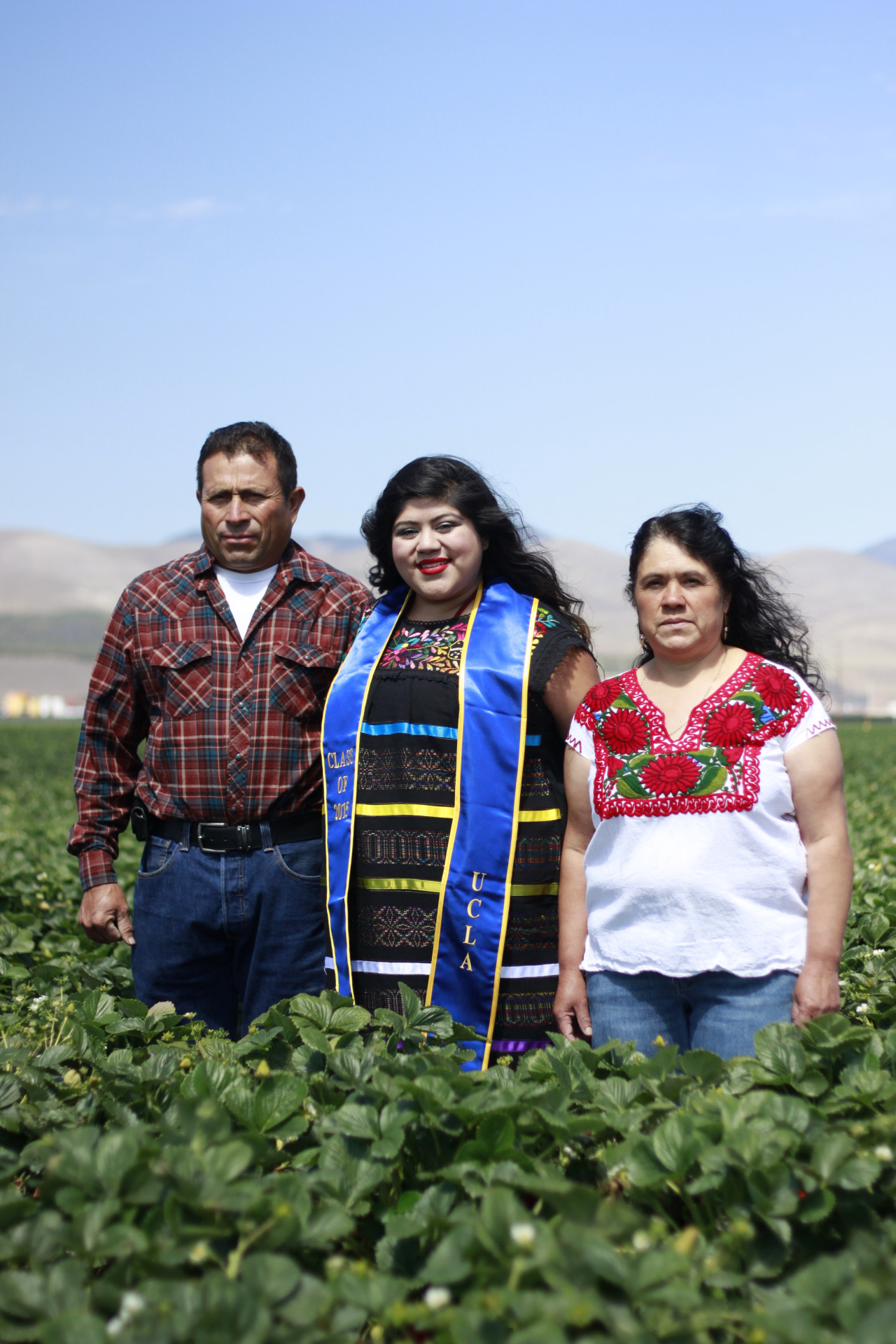 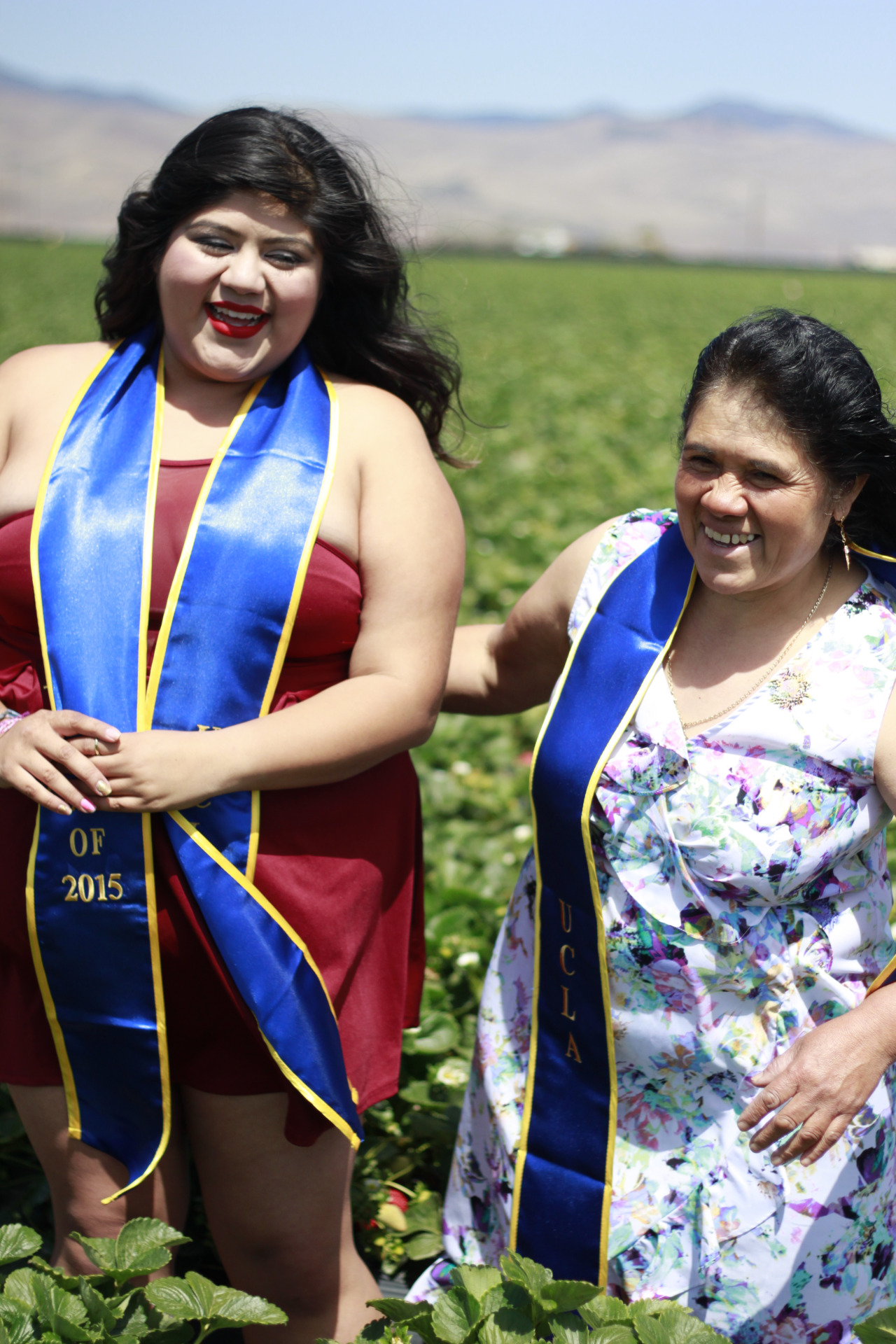 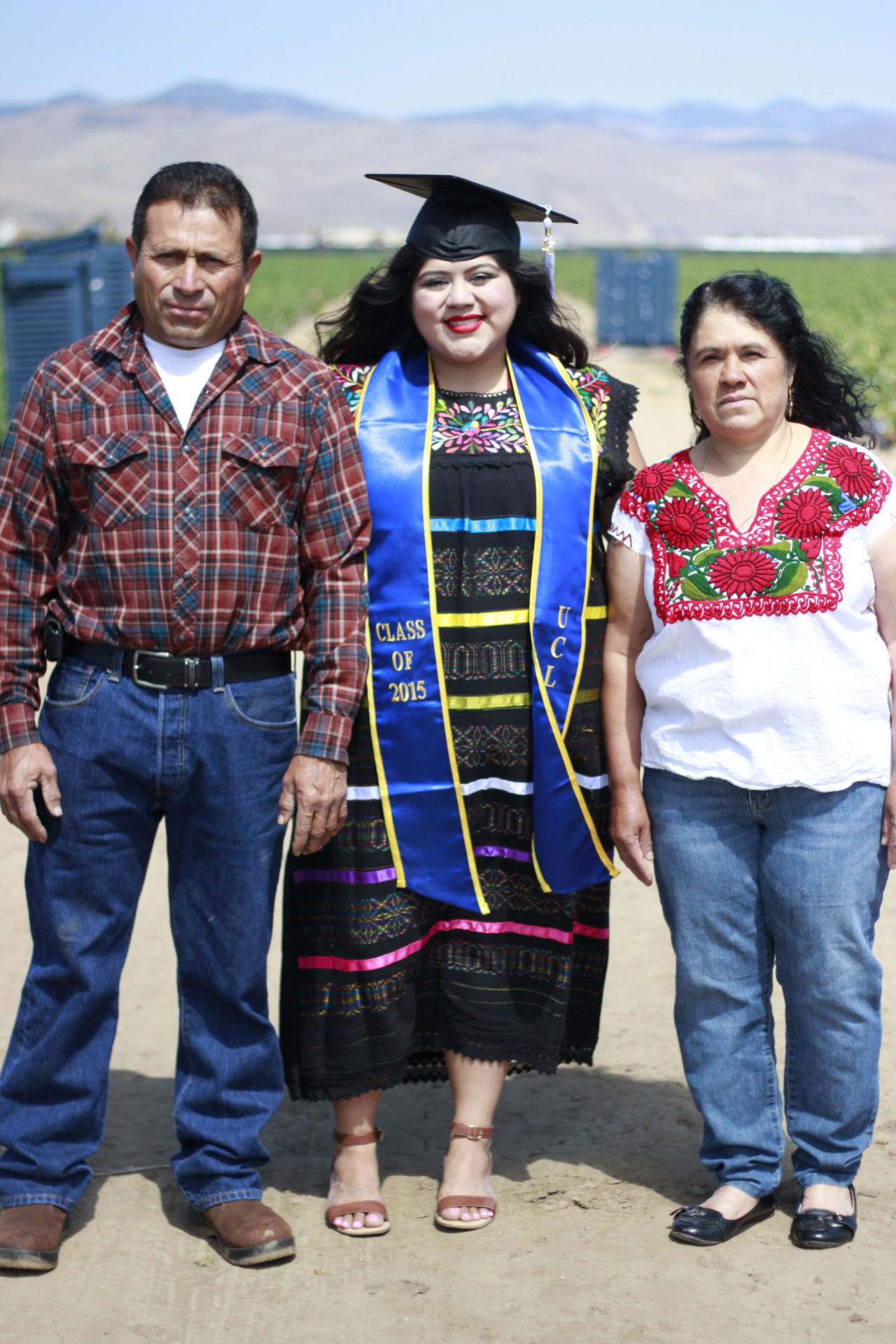 As you can see, the images are striking and beautiful. But coming from a mixed generation didn’t always look so freeing. I was so moved by the photos that I wanted to find out more about Gonzalez and her plans for the future. She generously agreed to speak with me about her upbringing in a family of California farmworkers, the hurdles to attending college, and her poetry. Eunice is currently working in her parents’ native state of Oaxaca alongside Raúl Hinjosa-Ojeda, a UCLA associate professor and economist, with El Instituto Oaxaqueño de Atención al Migrante.  Pending funding, the program aims to increase financial literacy amongst Oaxacan immigrants and make it easier to send and receive remittances. Although she’s worried about her future and job security like every other bright college graduate, something tells me this isn’t the last time we will be hearing from Eunice Gonzalez.

EMILLY PRADO: Can you tell me a bit about yourself and your family’s background?

EUNICE GONZALEZ: My parents immigrated from Oaxaca, with my dad leaving a few years before my mom in order to find work. Eventually my mom and [my] two sisters went to be with him. She crossed the border while seven months pregnant with me. That’s how I was granted the privilege of being a U.S.- born citizen. They settled in Santa Maria [California] because of the ties it has with their pueblo and because of the agricultural work in strawberries. They’ve been living here for the last 22 years.

How did your experience compare to your siblings’ growing up?

Both of my sisters weren’t given the resources to achieve higher education. I think it’s because during the time they were going to school, accessing college wasn’t a “thing.” My oldest sister admits she didn’t like school and left in ninth-grade.  But she’s happily married with three kids now.  My other sister did graduate. I can tell that if she had been given the chance and resources, she would have pursued college. But counselors weren’t supportive and being undocumented made it difficult for her to know that it was even an option.

Since you were born in the U.S., did your parent’s set the expectation that you’d go to college or was that something that wasn’t necessarily discussed?

My parents never told me I had to go, so it wasn’t until high school that I realized I needed to go college. We didn’t have the conversation—it wasn’t because they didn’t care but was because they actually didn’t have the time. They worked from 5 AM to 5 PM and had to cook and clean for three kids.  When I told them I’d get an ‘A’ in a class, they’d say “that’s good,” but didn’t really know how to celebrate that. In the end, their own hard labor motivated me without them saying it.

Did you feel UCLA was inclusive of your experience?

I made it inclusive because of how I was involved. The institution needs a lot of work but the fact that they offer these majors is something that I’m very grateful for.  I also participated in a lot of culturally relevant organizations for me such as MeCha and RAZA to create Latino-inclusive graduations through increased ticket limit and bilingual programs for example. I also did political community service that made my time at UCLA more purposeful.

What are some examples of challenges specific to students of immigrant families who are seeking higher education?

Not having someone to provide you with the knowledge or resources. For example, my first quarter at UCLA was really difficult and I struggled. I passed my classes but I could never call my parents or any family member at all to ask them how they did it because they don’t have that experience. So learning the ropes on your own is a challenge that a lot of immigrant families face. Another would be financial aid. I was grateful to have left UCLA with no debt by means of applying to 20 scholarships. But a lot my friends didn’t receive that financial aid. So they take out loans and use the money without realizing that one day they’ll have to pay it all back and end up with a lot of debt.

As a Chicana, what is it like navigating your bicultural identity? How is this experience different when you’re in the US versus in Mexico?

I don’t come to Mexico often because my family is undocumented and they can’t come here. So when I do come here, I come with my aunts or cousins. There are terms [that are used in the U.S.] that are not known in Mexico, because they’re irrelevant. So “Chicana” is not a thing here because it was a term created by people born in the U.S. to understand their own identities as Mexicans. So I’m not a Chicana here and I’ve finally been able to agree with that. I use “Oaxaqueña” but people here tend to call me “American” which I don’t like. But in the U.S. I’m not classified as “American” and people say “Mexican.” If anything, I’m learning that my prime identity is Oaxaqueña.

Was deportation ever a concern for your family?

Always. Deportation is scary and I’ve realized that I’ve grown up with an innate fear of Border Patrol or la migra. There were stories of ICE going to the fields directly to find undocumented workers. I remember being scared knowing that while I was in school there was a possibility that my parents could get taken away. Although I don’t hear these stories as often, I recently had a dream where instead of ICE deporting my family, it was politicians in business suits taking away my mother.

Whenever I visit my grandparents, my family [in Mexico] ask me very enthusiastically when my parents will be coming because they think that ever since I turned 21 they’ll be able to get their papers.  It’s hard to hear my grandma ask when her daughter will visit her while admitting that she’s getting old and hasn’t seen her in over 12 years. So my parents could go to Mexico and see their families but then they wouldn’t be able to see their other two daughters since they’re undocumented. I think it’s really important for [other] families to know what this feels like and that there’s always this possibility of being separated. We’re more than just a law that’s written on a piece of paper. There’s actual humanity to these situations.

As you mentioned, one of the biggest sacrifices of immigration is not being able to go back to your home country. What other kind of sacrifices did your parents have to make for you and your family in order to live here in the U.S.?

The labor is huge.  Strawberry fields in particular are one of the hardest types of agricultural labor because it requires you to have your back bent most of the time and without shade.  My parents are also discriminated against because they don’t speak English. It would be great if my parents spoke English because they’d be closer to achieving citizenship and self-advocacy, but they’ve never had the time to learn English while working in the fields. The work they do doesn’t require them to learn another language.

Are the strawberry fields depicted in your graduation photos important to you?

Yes, those fields are where my parents pick [strawberries] currently.  My parents have their own strawberry fields and although they don’t own the land, they rent and manage it.  They do the preparation for strawberry season, employ workers, and still choose to work the fields.  My siblings and I were encouraged to pick strawberries as well. I didn’t take it very seriously and wasn’t very skilled but I became responsible for “ponchando” which is the act of punching workers’ cards for every box of strawberries they pick. And me and one other sister picked regularly but minimally throughout school breaks.

In a poem in your Tumblr post about graduating college, you write, “This degree is ours, the strawberries can no longer claim you as their own.” Can you expand on this?

That line is actually the last line from a different poem I wrote about my siblings’ education [in relation] to immigration called Ten Truths of Loving my Immigrant Mother. It’s basically recognizing that in the U.S. she has had to adapt to a lifestyle that took her time away from me and has given her love to the strawberries in her care of them.

This poem is alluding to [the day] my parents eventually no longer need to work in the fields. The reality is that I have a degree, and that’s awesome, but my parents are still working in the fields now.

When I first saw your Tumblr post, it was at about 2,000 notes.  It’s now at 45,000 and Sofia Vergara has even shared it!  How does it feel to know that your experience resonated with so many people?

It’s great that people are seeing this because my parents, farmer workers, and immigrants need this recognition. I’m grateful that people see this story as a form of something beautiful and a success.  I haven’t had the time to sit down and digest all of it but I’m happy it happened.  I’ve had several messages on Tumblr from people who have field working parents who were really inspired. And to hear that people with similar backgrounds now feel they can do it—I’m really touched.

How do you feel about Tumblr as a platform for expression in general?

I love it. I’ve been active on tumblr for six years and began posting my poetry a year ago after a break-up. It’s really important for people to share their thoughts and learn from one another. Tumblr is great because we’re rarely censored and it gives us a platform to say what we and have other people see it and respond.

What's one final thing you'd like people to know about what the immigrant experience is actually like?

Immigrants are very sacrificial people. They leave their homes to find survival essentially, which deserves a lot of respect. They do a lot of labor that others don’t want to do including agricultural, domestic, and construction work. They allow the U.S. to thrive and without immigrants, privileged people would have a much harder time living comfortably.

To stay connected with Eunice, you can follow her on Tumblr @mariposa-reina and Twitter @yuni_gee. You can watch Eunice’s UCLA graduation speech here. 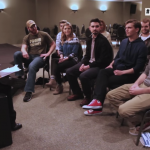