Amid All the Hubbub Over the Presidential Race, Abortion Restrictions Slip Into State Legislatures | Bitch Media

Amid All the Hubbub Over the Presidential Race, Abortion Restrictions Slip Into State Legislatures

This month, the Supreme Court is hearing arguments in a crucial reproductive rights case. Whole Women’s Health v. Hellerstedt will determine whether the Targeted Regulation of Abortion Providers (TRAP) laws that have lead to the shuttering of many Texas abortion clinics are actually legal.  Among the dozens of Supreme Court rulings each year, few make an immediate impression in our daily lives. But the ruling on Texas laws will decide how many women’s health clinics will be allowed to remain open in that vast state. Plus, it could set a precedent for the entire country.

Right-wing folks sell TRAP laws to the public with the idea that stringent restrictions against clinics actually make abortion safer. But as the American Medical Association noted in its amicus curiae brief on the case, the laws don’t make abortion safer, they create barriers to access that put people seeking abortion at risk. Harrowing new data shows that in the wake of TRAP laws passing across the South, Google searches for how to perform a DIY abortion have increased in those states.

According to NARAL Pro-Choice America, 44 states and the District of Columbia have some sort of TRAP law on the books. For every TRAP law, clinics have closed resulting in less reproductive healthcare access and making our lives less safe. Significantly, these laws that impact millions of peoples’ access to reproductive healthcare are passed by city councils or state legislatures, not Congress or any president.

But as our media is saturated with a deluge of discussion around the presidential race, it can be difficult to maintain a vigilant watch on local politics. It is easy to have our attention focused solely on ensuring that whomever does take up residence at 1600 Pennsylvania Avenue will have feminist ethics. But it’s often the local races that have far more impact on our daily lives. 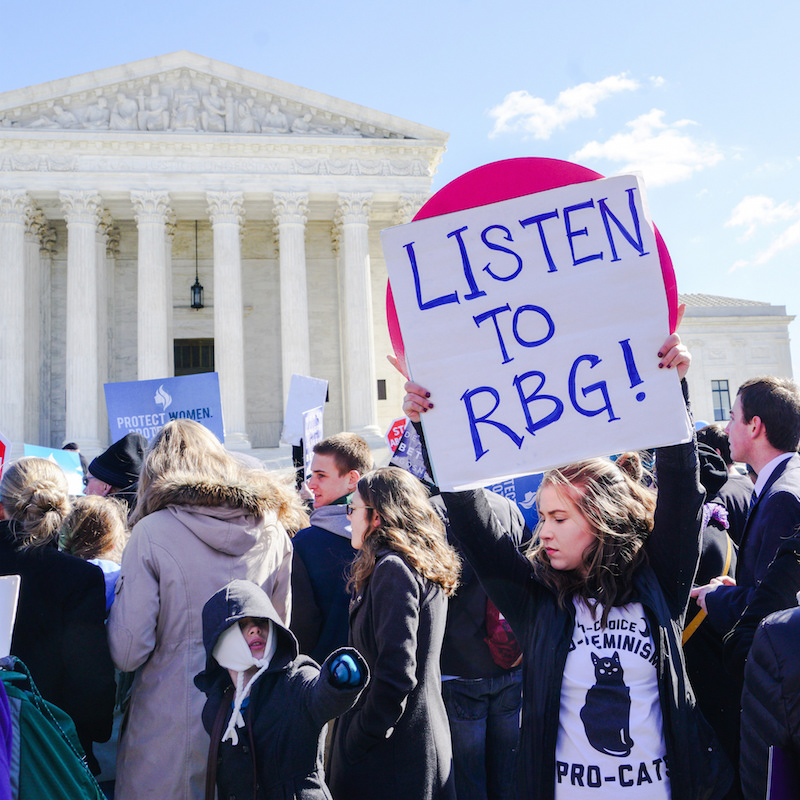 A pro-choice supporter outside the Supreme Court this month. Photo by Victoria Pickering.

As we’re continually distracted by Trump’s latest tirade, Republicans all over the country are pushing for new abortion restrictions. People like Florida State Senator Kelli Marie Stargel, who’s the chief sponsor of HB 1411—a bill that would block any state funds from going to health centers that provide abortions. This means that clinics that offer the full range of women’s health would be prohibited from receiving state funding for non-abortion services such as pap smears and HIV testing. Florida State Representative Jason T. Brodeur assisted Stargel in the bill’s swift move through the Florida legislature. Brodeur is well known to reproductive justice activists in Florida, he serves on many of the committees that expeditiously passed the bill. When he speaks against abortion rights, he often cites the fact that he was adopted and is so pro-child that he championed the “Docs vs Glocks” bill that prohibits pediatricians from discussing gun safety with new parents. Neither Brodeur or Stargel have strong opposition in their reelection campaigns this year.

But Florida is not the only state that needs to keep an eye on its local elected officials. Indiana feminists organized against a TRAP bill, HB 1337, which bans abortions due to genetic abnormalities. Among other terrible guilt-tripping tactics, the bill requires people who get abortions to view an ultrasound of the fetus 18 hours before the operation and forces abortion providers to pay for burying or cremating all fetal remains. Even some Republicans are against the law, like Rep. Sean Eberhart, a Shelbyville Republican who voted against the bill.  “Today is a perfect example a bunch of middle-aged guys sitting in this room making decisions about what we think is best for women,” he told CBS. “We need to quit pretending we know what’s best for women and their health care needs.”

As with the Florida TRAP law, Indiana’s bill began its journey to the Governor’s desk in the House. The bill’s sponsor, Casey Cox, has opposition in the primary, but none for the general election in November. One of his primary opponents includes “All Lives Matter” as part of campaign issues, so not holding out hope that includes pregnant people.

Over the next six months leading up to the presidential election, people are bound to get sick of the horserace around the national election. But as we have wall-to-wall coverage of each new jab from the Republican and Democratic opponents, these important local races fly under the radar. If ever there is a reason to make sure you know who you are voting for down ticket from the Presidential candidates, it is the person who represents you at your state capitol. Do you even know that person’s name?

This story was suggested by a Bitch reader. What other feminism and pop culture topics would you like to read about? Tell us below.