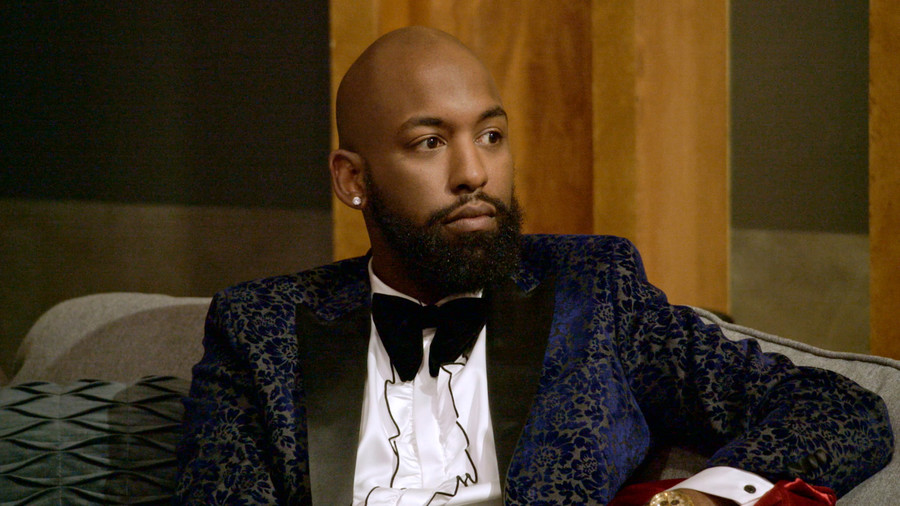 Reality television has long been a space for mess, in the best sense of the word: We watch as people are their most extreme selves onscreen, eager to enjoy a vast buffet of drama while feeling safely removed from it. But every so often we also see the ways reality television surpasses the comfortable mess and veers into the violent kind, bringing to screen the microaggressions—misogynist, homophobic, racist, and more—that are all too familiar in our everyday lives. Gone is fun, scripted mess, replaced by authentic mirrors of what leaves us feeling drained and frustrated in real life. It becomes, well, reality.

On a February episode of Love is Blind, this way-too-real drama took the form of biphobia— specifically, the biphobia faced by Black men—and in doing so, cast a shadow on the otherwise fun and ridiculous show. The premise of Love is Blind is simple: Men and women are split into groups according to gender, and are given the opportunity to go on truly blind dates in which contestants talk to potential partners through a wall—picture the classic Dating Game—but must get engaged before they’re able to meet face to face. The first episode introduced Carlton Morton, a Black man who is as flirty as he is misogynistic, and who also happens to be bisexual. “My biggest dream is that I finally find a wife who will love me unconditionally,” he tells the camera, “but I have a big secret.” Talking with the women on the other side of the wall, Morton  discusses everything you’d expect given the show’s premise—what he seeks in a partner, what he does day-to-day, and his hopes and dreams. Everything, that is, except his bisexuality.

This quickly becomes complicated. Morton finds himself falling for and eventually proposing to Diamond Jack, a Black woman who’s looking for real, true love (and someone who makes her laugh). But still, no disclosure. It’s not until he and Jack are on a vacation in Mexico with their engaged fellow Love is Blinders that Morton turns to the woman he now loves and trusts and says, “I really love you, but it’s like certain things are always in the back of my head. Like the past.” He continues, telling Jack “I don’t feel like you’re going to want me after this information. In the past,” he says, pausing, “I have dated both genders.” Jack’s response is biting. “My question is, how do you know I’m the love of your life? Do you ever feel like you need to go date another man?” When Morton assures her that this isn’t true to who he is as a person—indeed, that it’s a stale misconception—Jack remains hesitant, and requests time to think about it. By morning, Jack has returned her engagement ring to Morton. “You’ve got some serious issues,” she tells him, “because you led me to believe that you were really into me.”

At this point in LGBTQ history, the erasure of bisexual people onscreen is a topic discussed and critiqued with some regularly. In the 2016 piece for this site titled “Bisexual Erasure in Grace and Frankie,” author Jillian Richardson explains that such erasure “doesn’t just happen in Grace and Frankie, it happens all the time in our pop culture. Bisexual characters are rarely portrayed in TV and movies, and this underrepresentation contributes to the bias against bisexual people.” Even for progressive shows (besides Grace and Frankie, there was the swiftly-critiqued bisexuality versus pansexuality plot point in Big Mouth’s third season), it’s all too easy to slip. There’s been a slight upswing in the way queer and bisexual TV characters are presented, with 2019 offering new bisexuals and even giving them the space to be openly, and messily, bisexual. Vulture went as far as to identify a “bisexual boom on TV.”

But that boom hasn’t yet reached Black men. This was clear in Issa Rae’s Insecure, whose first season found Molly (Yvonne Orji) dating Jared (Langston Kerman). They’re having fun discussing the wild things they did during their younger years when Molly reveals that she once hooked up with a girl. And when Jared, in turn, shares that he slept with a man, Molly panics. The hypocrisy is obvious; worse, when Molly takes this disclosure to her friends, the resulting is pretty horrendous. To Issa’s (Issa Rae) question, “Why can’t Black men explore their sexuality without being labeled gay or bi or whatever?,” Molly  responds, “Because I want my man to be a man.” Tiffany (Amanda Seales) quips, “You can’t keep dating him. He’s gay.”

Ultimately, Molly ends things with Jared, and though she doesn’t admit that his bisexuality is the reason, it’s clear that a bisexual partner is something she just can’t or won’t accept, despite thinking of herself as a smart, worldly, compassionate progressive. In a review of the episode in The Root, writer Jonathan P. Higgins (who has contributed to Bitch) asks, “Why does it seem that Black men are never able to explore their sexuality without fear of rejection or embarrassment within our culture?” 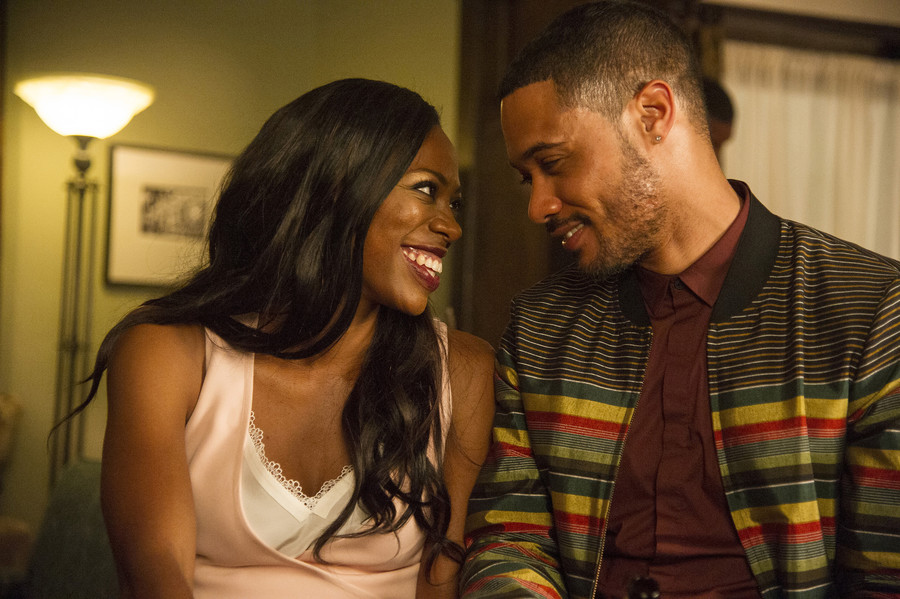 In 2014, writer Holly Eagleson proposed a question: “Where Are All the Bi Guys on TV?” “It’s gotten to the point where some of the only places bi men can see themselves on screen are in shows like The Real World, Catfish, or the occasional documentary, such as Bi the Way, which aired on Logo several years ago,” she writes. “It’s saying something when reality shows appear more evolved than fiction.” But Love is Blind makes us see that bi visibility can feel only barely more progressive than bi erasure. The harsh reactions faced by Black bisexual men, and the fact that their stories are largely missing onscreen, is one that Iyana Robertson explores in a BET piece titled “Why Don’t Black Men Get To Be Bisexual?” Robertson posits that Black bisexual men face intense stereotyping and stigma. “For many bisexual Black men,” Robertson explains, “a falsified reputation precedes them, and most mainstream images of Black male sexuality do very little to help.”

But what about Jack’s response to Morton? Robertson offers a thought that helps explain the sharpness of her reaction: “Definitions of masculinity remain archaic and limiting, and many Black women are guilty of applying these ideals to romantic and sexual relationships.” Robertson adds: “The black-and-white approach to the Black man’s role in sexual and romantic relationships is the result of dehumanization.” Following the debut of the Love is Blind episode, Jack shared her remorse about the experience with People. “I was trying to be very understanding, but I had questions because I’ve never been with a bisexual man. I don’t really know that community that well, but I respect the community. I love the community.” She continues, saying, “I just had questions. Maybe I should have been more encouraging and maybe start off saying, ‘I’m happy you were able to open up to me. I’m happy you’re able to bring this to my attention at this moment in time.’ Or, ‘I’m happy you came out. I know this is very hard for you to do that.’ That possibly could have changed that whole outcome of how we were aggressive toward each other.”

Ultimately, for some people, sexuality changes over time. The idea that partners meet, quickly know everything about each other, and thus inherently owe each other the revelation of every single truth if their love is to be true is false: it’s very possible to meet someone and fall in love and get married or otherwise begin a partnership with one or both of you thinking you’re straight, only to realize you’re bi; it’s equally possible to think you’re bi, only to realize later that you’re gay. In some cases, we just don’t know yet; in other cases, our sexuality shifts as time passes; in still others, we don’t feel safe sharing—and rightfully so. Especially given the structural and social lack of support faced by Black bisexual men, it’s not just ignorant but shortsighted, to expect Black bisexual men to owe people anything about themselves.

As Higgins writes, “Toxic masculinity can be deadly and only adds to the many hurdles that Black men have to cross in their day-to-day lives.” It’s less important for Love is Blind viewers to indict Jack for her reaction to Morton than it is to recognize their interaction as illustrative of the fear and hestitation that Black bisexual men can face in their relationships. Instead of simply judging Jack, we all owe it to ourselves to understand the history of racist biphobia, the ways that pop culture exacerbates it, and, finally, how we might help to heal it.

Read this Next: 5 Underrated Messy Bisexual Characters Blessing Our Televisions 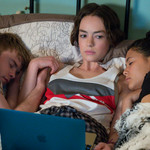 by Rachel Charlene Lewis
Most importantly, none of these characters are “perfect.”