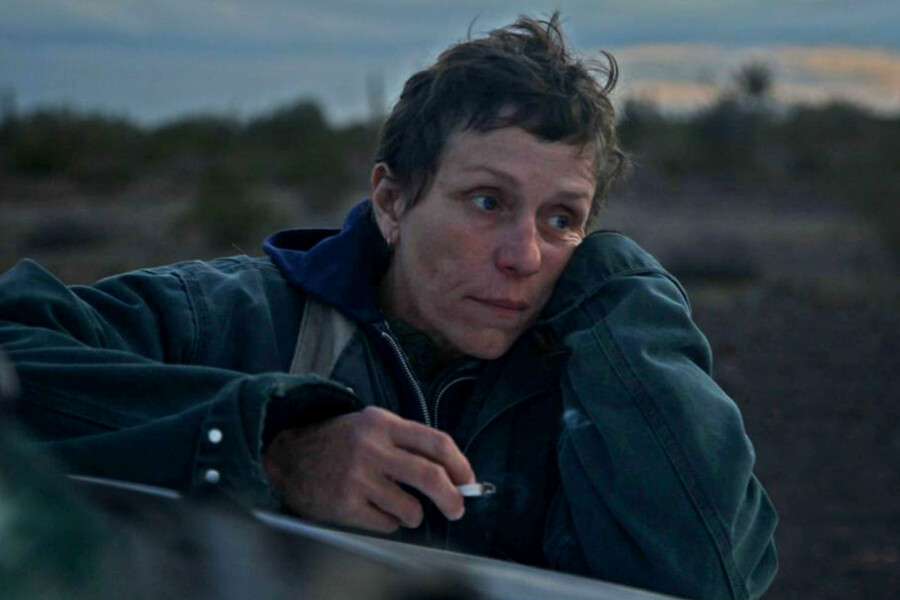 Because this is the reality we’re living in, the disaster that is J.D. Vance’s 2016 memoir, Hillbilly Elegy, lives on as a star-studded Netflix movie. Marketed to leftist intellectuals who wanted to better understand the voters who elected Trump, the book hit shelves right around the 2016 presidential election. It was an anti-answer—a caricature of what Appalachian down-and-outers look like, one that didn’t need to be resurrected as a blockbuster movie in 2020 of all years. Consider instead: Nomadland, the new film from Chloé Zhao based on a 2017 book by Jessica Bruder, a journalist who specializes in subcultures and who spent months living in the community she depicted. Nomadland stars the magnificent Frances McDormand as Fern, a point-of-view protagonist in the world of American van-dwellers. These modern-day nomads—living with the bare minimum of essentials and a surfeit of open-eyed curiosity—operate outside the version of America where the dollar determines personal value.

Fern is an emotive, solitary optimist whose life as a van-dweller on the open road is the core of the movie. Bouncing between temporary jobs and campsites, forging bonds and skills, she undertakes the hard work of keeping herself safe and alive, but also of accepting the temporality of everything she encounters—including friends who do or don’t resurface in the wide world of America’s snow-crusted highways. Fern is detritus from an economic collapse: Thanks to a Great Recession–induced decline in sheetrock demand, the city of Empire, Nevada, which was built around this industry, died. Fern, who moved to Empire after her beloved husband’s death, watches the town’s slow demise: Eventually, their literal zip code is discontinued. Desks covered in paper stacks and dusty helmets litter the U.S. Gypsum Corporation factory. There’s no way to survive there, but Empire’s residents don’t have the money to relocate. The whole of the movie takes place in a great American nowhere, where people like Fern gather after they fall through the cracks.

The world she lives in is flexible, risky, and solitary. It is neither the America most of its viewers live in, nor an America that most of its viewers would find enviable. But making the strange familiar and the familiar strange, Zhao delivers a journey worthy of its premise and performances. Key among these performances are the actual nomadic workers who star alongside McDormand. Again, like in Zhao’s most recent film The Rider (2017), she centers actual members of the community in the film. The nomads of Nomadland aren’t parroting what they think van-dwelling life looks like; they’re coming from the world of nomad-living rather than simply peering into it. I have no hesitation in saying that Nomadland is one of the very best films of the year: McDormand is a powerhouse and is effortlessly settled in her character’s skin. I also have zero hesitation in telling you to take whatever time or money you were going to spend on watching Hillbilly Elegy and watch Nomadland instead.

Hillbilly Elegy is a much-maligned book, and now a much-maligned movie, both of which have collectively earned every bit of scorn they have accrued. Its characters are caricatures of what outsiders can read as a kind of grotesque otherness (otherwise known as poverty porn), and nowhere in its thinking is the systemic force of poverty. Vance’s ideology is very much “pick yourself up by your bootstraps”—a comfy neoliberal mantra that’s easy to preach from the safety of higher income and professional clout. By Vance’s absurd logic, we’re led to believe that nearly a quarter of Appalachian Kentuckians are below the poverty line because of their own collective laziness and pessimism. If you’ve ever so much as dipped your toe in the social sciences or in common sense, then this idea sounds as dismally clueless as it is. Nomadland’s conjuration of space is something to behold. From the sweep of roadside vistas to the cramped darkness of a van to the boxed-in confinement of four walls and a roof, Zhao gives a powerful sense of scope. There’s a genuine and emotional sense of presence as the viewer moves with Fern through the beautifully realized environs of Nomadland.

These are characters who have worked since they were 12 and arrive at retirement finding themselves with $550 in Social Security benefits. These are characters who live in company track houses and buzz themselves in annually for seasonal work at an Amazon warehouse. You lose track of how many jobs Fern shuffles smilingly through, from campsite manager and restaurant server to industrial agriculture technician. Through all this struggle, the film’s philosophical refrain is steady and profound. The untethered and honest experiences on the road are earnestly, wholeheartedly precious to Fern, her friends, and the audience. Fern’s life is as fragile as the tires on her van: one flat is all that stands between her and total, lethal isolation in the wilderness. Life’s sense of worth is consciously disengaged from the spiral of promotions, degrees, and material goods that Vance seems so invested in reinforcing. Nomadland actively rejects the poverty porn tropes that are so abundant in Hillbilly Elegy. And while Nomadland is very far from trying to show the slice-of-Appalachia life that Hillbilly Elegy claims to, Zhao’s meditative confidence allows for a profound kind of companionship with the characters that is more powerful than what any Oscar-bait handwringing can summon for Amy Adams.

When Fern first joins the nomad community, she’s greeted with a video introduction about the group of rovers being there for people who need help now. There isn’t money. There aren’t jobs. This is a world Vance would argue Fern could work her way out of, as if that must inherently be her goal, or as if all the damage and trauma of the Great Recession can be erased with a crisp new paycheck. Nomadland is more grounded in reality, and in the emotional truths of what existing in a seemingly unknown America is really like. The thing binding the two films together—aside from their sharing an awards season—is the claim to a raw and honest look at very specific niches of American poverty. Nomadland’s poverty is rich with agency and nuance—a feat Hillbilly Elegy’s fetishization could never achieve.

Read this Next: Comrade Britney, Our Patron Saint of Millennial Woes 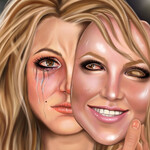 by Vanessa Willoughby
In these dystopian times, Britney Spears has become a symbol of the ongoing discussion about abolition and liberation from oppression. 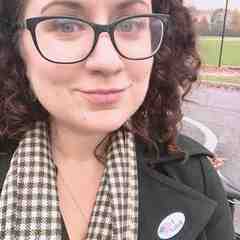 Alison Lanier is a writer, editor, and researcher based in Cambridge, Massachusetts.