A New Generation Goes through the Patriarchal Rites of Passage

When George H.W. Bush nominated Clarence Thomas to the Supreme Court in 1991, an all-white and all-male Senate Judiciary Committee subpoenaed Anita Hill to testify about the nominee sexually harassing her. After ridiculing Hill and rejecting her claims, the Senate confirmed Thomas and tarnished Hill’s reputation, turning 1992 into the “Year of the Woman”—a cultural moment marked by the passage of new sexual-harassment legislation and several women gaining Senate seats. Generations of women have since benefitted from Hill bearing her pain in front of an audience of millions.

Her public humiliation forced many Americans to contend with how women are mistreated and subjected to harassment in the workplace and other areas of their lives, and led  to the emergence of a national conversation about workplace sexual harassment. For a generation of Americans, the hearing functioned as a nationally televised instruction in patriarchy, a lesson in how women are maligned for speaking up about sexual abuse and harassment, and a demonstration in how easily men can evade responsibility for violating others. Still, the Senate Judiciary Committee’s refusal to address racism and sexism in the workplace was the most unsavory aspect of Hill’s testimony, the impact of which continues to impact policy more than 25 years later.

In September 2018, many of my peers—young millennials and older Gen Z’s—witnessed a national spectacle not unlike the one we’d ostensibly been spared from: the Trump administration’s Supreme Court appointment of another man who had been publicly accused of sexual misconduct. Psychology professor Christine Blasey Ford was one of three women who brought forth credible accusations against Kavanaugh, and she was asked to testify before the same legislative body that had once determined Hill’s fate. Though Ford knew she was ceding her privacy by coming forward, she shared her story because she considered it part of her “civic responsibility.” “I am here today not because I want to be,” she remarked. “I am terrified.” Compelled as a citizen and a survivor, Ford entrusted her truth to a system and a country that, ultimately, did not return her respect.

Unsurprisingly, for many, the Kavanaugh hearings seemed to echo the sentiments of 1991: The Senate Judiciary Committee’s gross mistreatment of Hill continues to haunt those who witnessed the scandal, as well as those who were born into a country shaped by her testimony. Invoked in nearly three decades of Black feminist criticism and in HBO’s 2016 drama Confirmation, Hill’s story lingers on as national lesson, a moment in history that tested us all. As Kimberlé Crenshaw, a law scholar who served on Hill’s legal team, wrote in a 2018 op-ed for the New York Times, “The Hill-Thomas conflict has gone down in history as a colossal failure of intersectional organizing.” Crenshaw also asserted that we can’t afford to ignore the lessons Hill’s testimony taught us. “It’s not too late, as the Kavanaugh nomination fight enters its next phase, to write a better history.”

Yet, 27 years after the Hill-Thomas hearings, when America’s leaders were faced with an opportunity to correct their errors, they chose, instead, to double down on their patriarchal education. For each generation, national events like the Kavanaugh hearings function as a kind of rite of passage. These occasions introduce us to our country’s values, processes, and our roles within them. When a woman testifies on a hostile national stage, we are too often forced to bear witness to patriarchy’s capacity for self-preservation. Not unlike the ceremonious ways in which we may regard the living milestones of puberty, maturation, or death, America’s patriarchy is also shaped by the spoken and unspoken rituals and traditions that we perform and have performed upon us.

Though many of today’s young adults were exposed to terms like “consent” and “sexual harassment” in schools or through televison shows and movies, we still find ourselves faced with the nation’s unresolved apathy toward sexual and gender-based violence. These traditions in which we are made to observe (in both the public and private spheres of our lives), work to undermine all creative attempts at curricular interference. Only a year after the Kavanaugh hearings, his ascension to the Supreme Court continues to have irreversible consequences for Americans and non-Americans alike, particularly in the realms of reproductive justice and gender-based discrimination.

Sworn in by none other than Justice Clarence Thomas, the patriarchal teachings of our judicial system were repeatedly cited throughout Kavanaugh’s ascension to the Court.

Kavanaugh’s time as a judge on the Court of Appeals demonstrated a precedent for voting against those who needed to have their reproductive rights recognized and upheld. In the Garza v. Hargan case, in which an undocumented teenage girl sought to have an abortion, Kavanaugh voted to block her access. A reminder that these policy issues affect us all, regardless of citizenship status, Kavanaugh’s ruling in this case highlights once more what continues to be at stake. Access to birth control, abortion care, housing, and/or job protections are the issues currently being revisited by the Supreme Court, with women, cisgender and transgender, at the forefront of the legal discourse.

As it stands, the right to act as the sole authority of one’s body—to preside over its treatment medically, sexually, politically, or otherwise—is still up for debate. Kavanaugh, who’s a student of the sociopolitical traditions that preceded him, has proven himself something of a “star student” where the nation’s most violent lessons are learned. Still, we would be remiss to make him out the principal of this school of thought rather than a mere pupil. Sworn in by none other than Justice Clarence Thomas, the patriarchal teachings of our judicial system were repeatedly cited throughout Kavanaugh’s ascension to the Court.

In order to disrupt the continuation of these kinds of institutionalized rituals, we must call upon and educate ourselves in the traditions of resistance that also exist in this country. Women like Hill and Ford, who spoke truth to power, are a part of these traditions, as are Black feminist intellectuals like Crenshaw. They teach us that gendered power is nothing without studied implementation. In turning toward these rites of resistance, their testimonies and teachings instruct us to overturn that which does not serve us and to do so without ceremony.

Read this Next: The Manipulative Power of White Men’s Tears 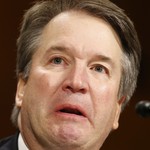 by Nicole Froio
The Kavanaugh hearings exemplified how men weaponize the concept of male vulnerability to maintain power.