Thanks to climate change, natural disasters, from tornadoes to hurricanes to wildfires, are so frequent that it’s possible to become desensitized to their impact. For Cipherella, however, it’s impossible to shake the devastation Mother Nature wreaked on her life in 2011. After she and her mother lost their Tuscaloosa, Alabama home to a tornado, she decided to take a leap, move to New York, and create music. It has certainly paid off: Cipherella’s now the host for New York’s NuYorican’s Poets café and working on moving music that sits with listeners.

In this interview, Cipherella discusses how losing everything afforded her a new life, finding inner peace, and how her music reflects her experience.

The “Moments” video is “an artistic exploration of human frustration, confronting the negative aspects of the ego, which becomes the noisy background that disrupts our desire for inner peace.” How do you maintain your inner peace?

Honestly, [I maintain it] through music. Some people cope by drinking, crying, or whatever their vice is, but for me, music has become somewhat of a vice. Anytime I’m feeling stressed or flustered, and I feel that I just need that balance, I take to writing. Music is my inner peace.

What inspired “Moments?” The song seems to be a conversation you’re having with yourself, more than anything else.

Ironically, I was having a moment. I was just thinking that I was enduring so many things: My mom was dealing with an illness; my friends were dealing with their issues; and my family was dealing with their own problems, and everybody was coming to me with the issues they were facing. But nobody stopped to ask me, “How are you doing? How are you feeling today?” Every time someone called me, it was because they needed something or they wanted to vent about something. I just needed a moment to focus on what I need to do for me instead of being played by the outside world. I just started writing, venting, and talking to myself, and it just went from there. 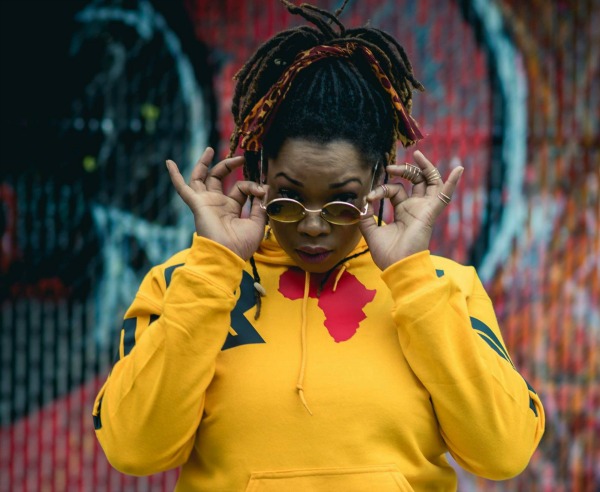 Your music is very vulnerable and seems to use real life experiences as fuel. How do you enact boundaries? How do you decide what to keep to yourself and what to share?

If I’m being honest with my music, I have to give it all. Music is how I find my inner peace, so I have no boundaries, especially because music is an art form. My objective with my art is to create dialogue, so sometimes I create music that will be uncomfortable for people. There are no boundaries. I express exactly what I need to express [through music]. I don’t withhold anything because music is my therapy.

“What Ya Gonna Do” speaks about police brutality and the system that protects cops who kill Black people and people of color. Do you think it’s your duty as an artist to use your music to raise awareness and speak truth to power?

No, I don’t think I have a duty to speak for or about anything. It’s just my choice. “What Ya Gonna Do,” came from a personal experience. The first verse is “1 o’clock, 2 o’clock, it’s 3 in the morning/ I heard three knocks, then three glocks, and three cops, no warning/ No sound and no witnesses around.” That literally happened to me when I was in New York. I had the unpleasant experience of my home being raided by the police. At the time, I was staying with some friends, and a situation went down. It put me in a very uncomfortable place, and being downtown one day and seeing a protest was so overwhelming to be a part of. It was one of the first protests I’ve ever witnessed. It was just a lot of emotions. What sparked the song was experiencing [the raid].

When did you realize music is your calling?

I knew I wanted to create music in 2011, but I didn’t act on it until 2013. [My love for] music stemmed from a spiritual experience: In 2011, I lost everything in a tornado [in Alabama]. I was brought up in a Christian household, but I’d never sought to understand religion myself or develop a relationship with the higher being. On this particular day, it felt like I was in tune: [The higher being] told me to go home, get my mom, and take her to my uncle’s house. I was instructed silently to remove her from the house. After [the tornado], I was listening to Erykah Badu’s “On and On,” and I figured out that music is a vessel. I love to write, and I’ve always been musically inclined, but in Alabama, music and entertaining wasn’t a realistic goal. I’ve always been told I was a great writer, so once I figured out that music could affect how someone feels, that was it for me. Music became a form of healing. I’m just choosing music as my vessel.

“Cipherella” is an incredibly unique name. How did you decide on it?

Cipherella came about because cypher is, metaphorically speaking, 360 degrees. It’s a circle of completion. A cypher in the rap world is also a circle where people gather around and share lyrics. I took cypher from that. “Ella” is just a feminine and masculine form of the highest being. “Elle” is masculinity and “la” is femininity. 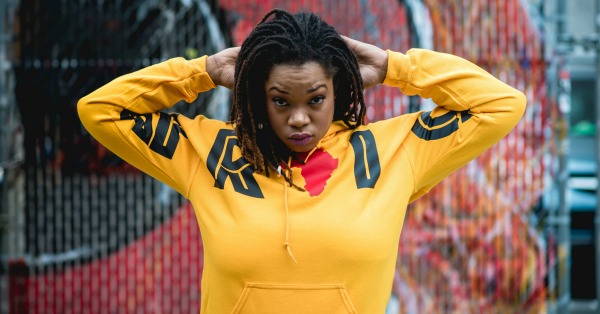 Although you’re rapping, your music is a combination of funk, soul, and R&B. Your music is soothing, almost healing. Who were your musical influences when you were growing up?

I used to be in a blues band [laughs]. So, I was brought up on blues, soul, and R&B—BB King, Howling Wolf, Johnny Taylor, Aretha Franklin, and Patti Labelle, who was my mom’s favorite [artist]. I remember dancing in the mirror with a brush, trying to hit the notes like Patti. As I got older, I was able to expose myself to different varieties. I was really into the neo-soul genre, and used to pick apart the samplings in the music. That’s how I was exposed to jazz and rock. I’m really into rock music because I love the way it feels. I love the energy of rock music, the soul of R&B music, and the funk of soul music.

You moved from Tuscaloosa to New York City after you and your mother lost everything. Did creating music help you heal in any way? How did you get back into the process of creating music after something as devastating as that?

Before the tornado, I wasn’t creating music. The tornado was, literally, the inspiration behind it all. That moment taught me that I’m supposed to do what I want to do in life. No one can tell you what you’re supposed to do, and if you allow someone to tell you what you’re supposed to do, you’ll never get to live for yourself. Life can be taken from us at any moment, so you need to live it to the fullest. I love music, writing, and vibing with the audience, so moving to New York let me experience more. I didn’t want my point of view to be so narrow that I was unrelatable. At the same time, I wanted to explore more cultures and diversity, so I could relate to people. The move to New York was everything.

Do you have a timeline for when you’ll be releasing your full-length project?

In my head, yes [laughs]. I don’t want to deliver anything that I’m not fully satisfied with, so I’m trying to buckle down on myself and stop being such a perfectionist. I’m going to release this project in 2018.

You may not have heard of hip hop producer Ebony Oshunrinde. Stop! Don’t rush to Wikipedia because you feel out...