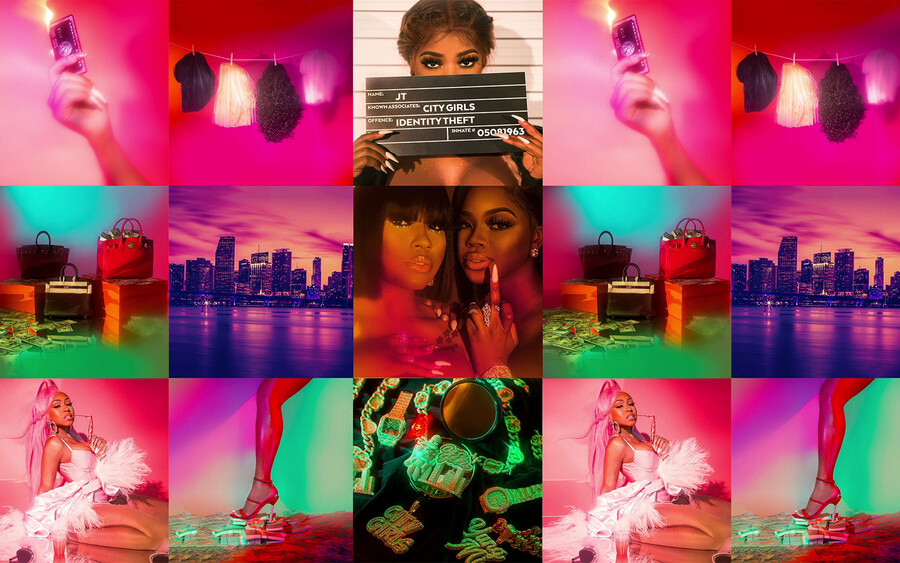 “Gutter bitch, grace the cover of the billboards/ Locked up, nominated, BET awards/ City Girls, talk that shit they scream/ Real ass bitch, I ain’t flex for streams,” raps JT, one-half of the hip hop duo City Girls, on “Enough/Better,” a standout track on the group’s latest album, City on Lock, released on June 20. Sure, it’s a braggadocious line, but it’s also a pristine snapshot of the group’s meteoric rise from rapping for fun in their Miami neighborhoods to putting themselves on the map, enduring a prison bid, and releasing top-charting albums full of catchy and adventurous rhymes. On June 15, the majority of City On Lock leaked online, ahead of any publicly announced release date, which forced the group into a corner. The Miami-based rap group could either continue voicing their frustrations about the unauthorized drop or release the album ahead of schedule. The City Girls chose the latter, officially releasing the full project on June 21, taking control over their art, and ultimately continuing their penchant for prospering—period.

City On Lock joins their small, but impactful catalog, which includes their debut mixtape, Period, and their follow-up album Girl Code, both released in 2018, and continues to express their dedication to making music on their terms. City on Lock also showcases how City Girls have fought to be elevated from rap game underdogs to canonical icons in a little less than three years.City Girls are known for their viral catchphrases, including “period” (sometimes amended with an empathic t on the end) and “flewed out,” which have evolved into memes, used by many to describe their current mood. (Yung Miami even raps “I go viral when I talk, period” on the official remix to Saweetie’s 2019 hit song “My Type.”) With this latest release, however, they’re asserting that they’re more than a trending topic: JT and Yung Miami are disruptors of hip hop’s misogyny, spitting rhymes about their sexual prowess with no fear about being labeled gold diggers, jezebels, or ghetto.

City on Lock is their ethos at its finest—taking the stereotypes stacked against them as bold, Black women who demand good sex and long money, and flipping them into their super power. On this project, JT and Yung Miami are twin flames, backing each other up on every track. As the two rappers go back and forth on “That’s My Bitch,” JT reminds the world “Yung Miami keep the Glock if you act bad.” And Yung Miami warns “Fuck wit’ JT/ You fuckin’ wit’ me/ You gettin’ stomped” on the cleverly named “Friendly.” It’s an evolution not only of their storied friendship and business partnership, but also of their rapping ability. After “Act Up,” a standout track from their debut album, Girl Code, became a chart-topping hit, their labelmate, Lil Yachty, publicly shared that he was the writer responsible for Yung Miami’s lyrics and the popular hook.

Though Yung Miami didn’t write her verse, her off-beat, rambunctious delivery fueled the infectious song, and she’s since doubled down on her musical strengths, adding flavor and finesse to choruses and accessorizing her verses with catchy ad-libs. She’s also developed a smoother flow, helping the mixtape rappers rise from having a niche fanbase to becoming bona fide stars. Much of their success can be traced to an uncredited feature on Drake’s catchy 2018 hit, “In My Feelings” (and its subsequent viral dance), which introduced their South Floridian accents and attitudes to a wider audience. After the cosign from the self-proclaimed 6 God, Yung Miami was faced with holding down the group while her partner-in-rhyme was incarcerated for 16 months. Releasing Girl Code while JT was behind bars put City Girls on another tier in the rap game and solidified their placement in a lineage of rappers who believe femininity is synonymous with fierceness. Trina, a fellow Miami rapper, paved the way for them; her iconic songs such as “Pull Over,” “Look Back At Me” and “Da Baddest Bitch,” should be prerequisites for listening to City Girls.

Other rap acts such as Salt -N-Pepa, whom JT and Yung Miami pay homage to on a 2018 remark of “Take Yo Man,” were the last female hip hop group to obtain the kind of success City Girls are seeing. But women rappers like Missy Elliott, Lil’ Kim, and Nicki Minaj paved the way for City Girls to rap about their desires without regard for the thoughts or feelings of their male subjects. These themes, though common among rappers, especially as the talent pool becomes more balanced by gender, are uniquely recycled by City Girls. While their peers such as Megan Thee Stallion and Saweetie are also making music about their orgasms, thick thighs, and rich suitors, City Girls are toting guns in their Balenciaga handbags, setting up successful scams, and detailing the plight of growing up in the streets. City On Lock, a 15-track album that highlights their aggressive bravado, upholds their brand of disregarding men: Songs like “Enough/Better,” “Double CC’s,” and “Flewed Out” showcase their growth as artists.

Rather than depending on shock-and-awe one liners, both take a more lyrical route, playing with flow and speed, delivering playful puns, and managing tricky rhyme schemes. Still, the group sticks to what has brought them this far, hitting us with party anthems that have catchy hooks and twerk-inducing beats. On “Pussy Talk,” which features Doja Cat, Yung Miami repeats the different terminology her vagina understands, from languages to labels, on the hook. The chorus is followed by a catchy, repetitive “Don’t nothin’ but this cash make this pussy talk/ Don’t nothin’ but a bag make this pussy talk” before each rapper lays down her verse. On “Jobs” the album’s lead single, they simply state “I don’t work jobs/ Bitch I am a job,” and “Broke [N-words]” amplifies a trap beat as they repeat their mantra, “Broke [n-words] don’t deserve no pussy,” multiple times.

The pair have elevated from their debut mixtape to a fully-fledged act with a clear voice that defies standards that enforce men as dominant and women as disposable. “We from the trenches, not the palm trees” Yung Miami reminds listeners on the title track. On this album, they’re taking on the boys’ club and burning it down. Rap music has been historically dominated by Black and Latinx men, leaving little room for women artists and upholding bigoted values that reflect the larger U.S. culture. “The sexist, misogynist, patriarchal ways of thinking and behaving that are glorified in gangsta rap are a reflection of the prevailing values in our society, values created and sustained by white supremacist capitalist patriarchy,” bell hooks wrote in a 1994 essay. “As the crudest and most brutal expression of sexism, misogynistic attitudes tend to be portrayed by the dominant culture as an expression of male deviance. In reality they are part of a sexist continuum, necessary for the maintenance of patriarchal social order.”

Though City Girls have never declared themselves feminists, they’ve long pushed hip hop to make space for their version of liberation. The power of their pussy is an anchoring theme throughout their album: The word is mentioned dozens of times in repetitive hooks and bold verses and it’s presented as both an asset and a product, putting the ladies on top of their own, self-scammed empire. While raunchy raps often include a mutual agreement about pleasure, JT and Yung Miami disregard the other party’s satisfaction. Birkin bags and self-amusement is their endgame, with Yung Miami and JT assertive about who gets a taste. For them, money talks, and for many sex workers who can relate to their sentiments, knocking boots for free is detrimental to their survival. As echoed on the track “Broke [N-words],” only men who are able to financially provide deserve intercourse and their only gratification comes from securing the bag. City Girls offer the truest version of themselves on the mic, with no interest in attempting to make themselves and other ghetto girls palatable for mainstream consumption.

Though City Girls have never declared themselves feminists, they’ve long pushed hip hop to make space for their version of liberation.

The pair take pride in their humble beginnings and nuanced lingo: They’re two brown-skinned women who frequently rock colored weave, big hoops, heavy chains, and speak slang—almost arrogant about their identity. In this way, City Girls use their sexual prowess, hustler mentality, authoritative attitude, and rebellious lyrics to call the shots, disrupting a culture that both enforces misogynoir and creates narrow, divisive lanes for female rappers. The video for “Twerk,” the lead single from Girl Code which featured their label mate Cardi B, centered around Black girls having fun and throwing ass without worry or fear in a warm, welcoming, and safe environment. “Act Up,” an audacious summer anthem, carried the same provocative energy that powers most City Girls tracks. JT opens the song with, “Real ass bitch, give a fuck about a [n-word].” With City On Lock, the Miami-bred duo are continuing to create defiant bops, diary entries, and street anthems for the loud Black girls, whose voices and stories command attention.

While they paint vivid pictures of a dream lifestyle, the ladies don’t dreamily skip over their reality, electing to, instead, explain through song how their circumstances shaped them—and fostered their tight-knit relationship. JT raps on “Ain’t Sayin Nothin” about how her father caused anger and confusion that impacted her already rough upbringing. “Middle finger to my daddy, why a sucker had to fuck my mammy?/  Left us and he traumatized us badly/ Created him, a savage.” Yung Miami also continues to push the envelope, channeling her anger into direct violence, rather than simple metaphor, making it clear that she calls the shot: “I ain’t Bonnie, fuck Clyde” she eagerly raps on “Come Outside.” Though they sometimes fall victim to repetitive cadences and misfired punch lines, both women have evolved since they burst on the scene, from delivery to content, and solidified their voice in a microwaveable industry. In the future, hopefully, JT and Yung Miami remain distinctly themselves—growing as rappers, exploring new sounds, and never seeking approval.

Read this Next: New Rules 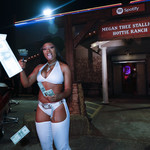 by Natelegé Whaley
“Fever” is a state of the union address for Megan’s “Hottie” nation. 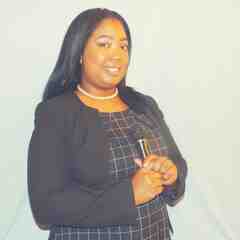 DeMicia Inman is a journalist from Columbus, Ohio reporting on music, culture, and trending news. Follow her on Twitter @DeMiciaValon.