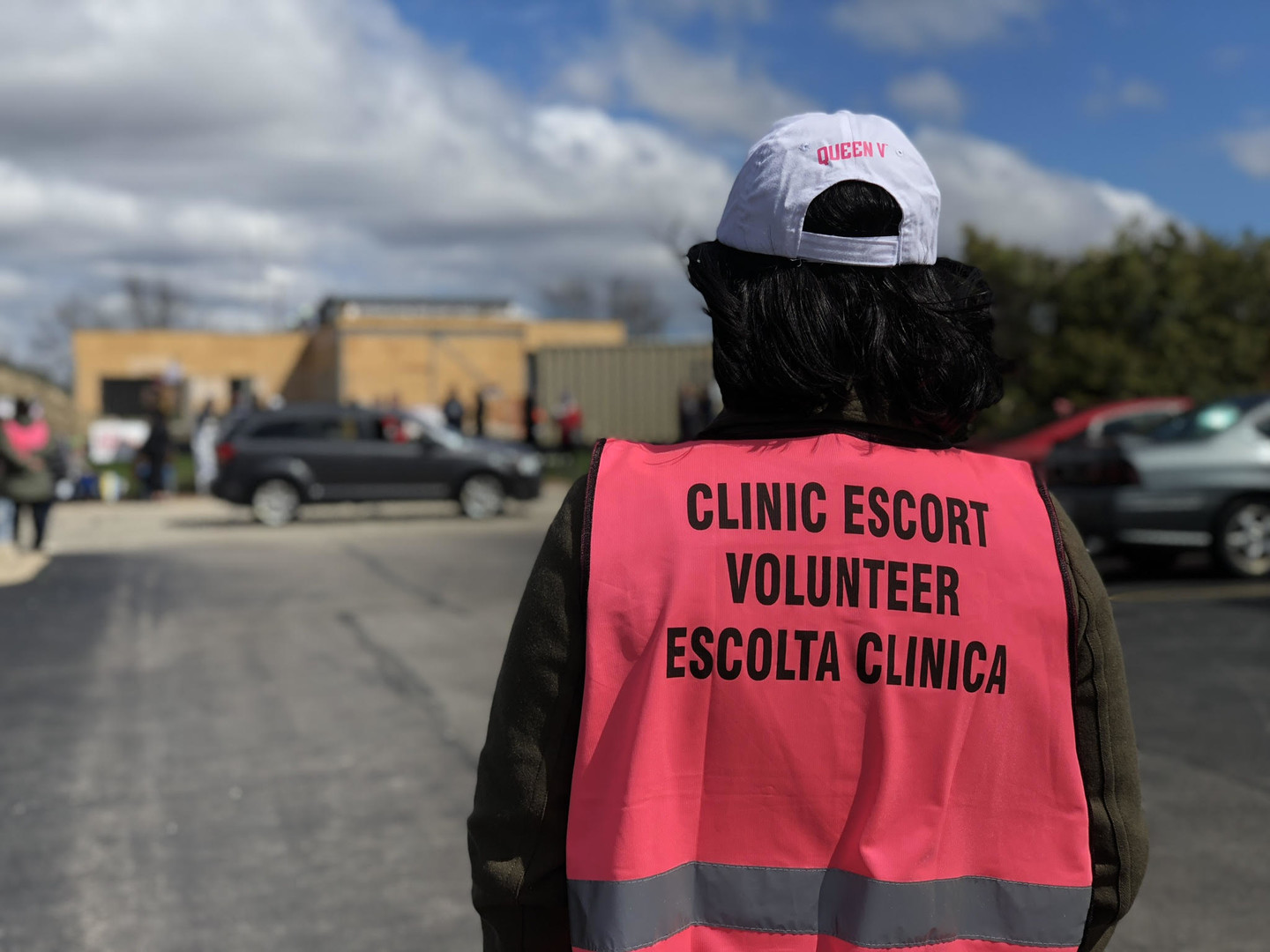 Courtesy of Planned Parenthood of Illinois

It’s easy to miss Metropolitan Medical Associates (MMA), an inconspicuous brick building on an otherwise busy public street in Englewood, New Jersey. MMA has been providing abortions since 1973, and for more than three decades, it has been inundated with harassment. In 1997, 17 anti-abortion activists were arrested for storming a police barricade to disrupt the clinic’s normal operations. George W. Bush’s presidency brought federal abortion bans, which largely abated clinic protests. But by fall 2013, protests at MMA were becoming more common, with the number of protesters increasing from a handful to more than a dozen.

Some aren’t overtly hostile: The employees of the Catholic anti-abortion crisis pregnancy center across the street use sweet, saccharine tones to attempt to persuade patients into going to their center or into the industrial-sized van parked in front. Others, like the all-male members of a fundamentalist church in rural New Jersey, are far more aggressive. They position themselves at the door of the clinic, camera in hand or attached to their chest, and film every person who comes in and out of the clinic. They scream into amplification devices that abortion is a part of a sinister plot to murder Christians. They pray and prey on MMA’s employees and patients.

As a writer and as a member of the New Jersey Abortion Access Fund, I am passionate about the movement to protect abortion rights. But I wasn’t prepared for what would greet me on the utterly frigid January day in 2014 when I began my first shift as an abortion-clinic escort. Freezing and fearful, I walked out onto the sidewalk in my neon yellow vest, and was immediately met by a swarm of angry protesters. I had helped walk a couple of patients into the clinic when I spotted a timid, slow-walking couple about a block away. Her head was down and she didn’t make eye contact with anyone. His arm was wrapped protectively around her waist, and his gaze was like an arrow to the door.

Another escort and I slowly approached and flanked them, and we began to walk. I was so new and so nervous; I had no idea what to do. As we passed a couple of protesters, I felt calmer—nothing. And then I heard it: “You’re so beautiful. Don’t murder your beautiful baby!” I felt the patient’s husband’s head whip around and I saw his big, brown eyes fill with hurt and rage. Tears were streaming down his face. He stared at the protester, a white, middle-aged woman who we later dubbed “the Runner” for running after patients, and screamed, “We wanted this baby! WE ARE HEARTBROKEN!” I glanced at his wife, who had crumpled, sobbing, into the arms of my fellow escort. Instinctively, I stretched out my arms as wide as I could and put my body between the Runner and the couple in a vain attempt to shield them from the harm that had already been inflicted on them. Time seemed to stop. No one said a word. And then, as they entered the clinic, it all began again, as it always did, as it always would.

Since the beginning of legal abortion in the United States and the ensuing expansion of freestanding abortion clinics in the mid-1970s, there have been protesters. In 1975, six women staged the first sit-in at an abortion clinic in Rockville, Maryland, and were arrested and sentenced to six months of unsupervised probation. In 1976, the first clinic was set on fire in Eugene, Oregon. During the 1980s and ’90s, a radical anti-abortion protest group called Operation Rescue aimed to shut down clinics. They inundated cities like Birmingham, Alabama, and Wichita, Kansas, where they managed to shut down Dr. George Tiller’s abortion clinics for six weeks. This led to a terrifying spate of assassinations of abortion providers in the 1990s (many carried out by members of the anti-abortion terrorist group Army of God), culminating in Tiller’s murder in 2009 and the murder of three people at a Planned Parenthood in Colorado Springs, Colorado, in 2015.

Many assume those days are over. They’re not. According to the Guttmacher Institute, a research and policy organization advancing sexual and reproductive rights, since 2011, more than 400 abortion restrictions have sailed through state legislatures, resulting in safe, legal abortion clinics being significantly outnumbered by anti-abortion crisis pregnancy centers, which deceive patients in order to discourage them from having an abortion. Around 40 million people who can get pregnant live in states hostile to abortion rights, and many are forced to travel hundreds of miles to reach the nearest clinic. EMW Women’s Surgical Center isn’t Kentucky’s only abortion clinic by accident; the center has been fighting anti-abortion legislators for years to stay open, and is among six states that have a single abortion provider serving their entire population. Because it’s the only clinic left in Kentucky, it’s become an easier target for protesters. On the one hand, the clinic serves as a sanctuary to Kentucky patients in need. On the other, it serves as a target.

No matter what happens to Roe v. Wade, whether it is struck down or slowly eroded by seemingly benign restrictions, it won’t stop clinic escorts like Paula Schneider, Benita Ulisano, or me.

After Donald Trump was elected president in November 2016, then-69-year-old Paula Schneider felt compelled to act. She’d had an abortion decades earlier in Louisville, Kentucky, a fact that she’d shelved. “I grew up in that era when everything and anything sexual was shaming, and I can’t tell you how uninformed I was most of my life,” she says. “But when Trump was elected, I thought, I have to now. I’m a part of this.” She went to EMW Women’s Surgical Center and signed up to become a clinic escort. On her first day on the sidewalk, she had a moment of release. “I remember walking a young lady into the clinic and she was so terrified,” Schneider recalls. “I said, ‘I’ve been here myself,’ trying to give some comfort to her. And it was like, ‘I can say it out loud now!’”

Schneider was at the EMW Women’s Surgical Center during a chaotic week in July 2017 when the clinic was inundated with hundreds of anti-abortion protesters from Operation Save America, the rebranded anti-abortion protest group that infamously blockaded clinics across the country in the ’80s and ’90s. “There were hundreds of protesters and lots of kids walking up and down the streets,” Schneider says. “They had kids playing with chalk in the middle of the street.” The clinic got a temporary eight-foot buffer zone in front of the clinic, but it didn’t matter. Protesters sat with their backs to the clinic door and refused to move.

It could have easily been mistaken for a scene from 1989, but there was one key difference: Protesters now think the government is on their side. As buffer zones have been struck down by federal courts and the U.S. Supreme Court, abortion-clinic protesters have become even more hostile. Add to that a vehemently anti-choice presidential administration staffed by anti-abortion fanatics and a Supreme Court stacked against Roe v. Wade, and anti-abortion protesters are no longer a radical fringe. For as long as they stay open, clinic escorts will protect the people walking toward clinic doors. But what happens to clinic escorts if there are no clinics?

I, like many other clinic escorts, began doing this work because I wanted to support abortion access. But the reality is much more simple: Clinic escorting is about supporting and protecting people amid chaos. “It’s nonpolitical. It doesn’t matter to me what your political views are,” Benita Ulisano, a clinic escort in Illinois and founder of the Clinic Vest Project, says. “If you’re going to the clinic, I’m going to escort you.” Ulisano has become a de facto leader in clinic escorting: In 2004, she cofounded the Illinois Choice Action Team and later started the Clinic Vest Project, a nonprofit organization that provides free clinic escort vests to teams across the country. And she still shows up on Saturday mornings at Family Planning Associates in Chicago to walk patients past a barrage of protesters. No matter what, Ulisano shows up. We all do.

Maybe that’s the point: No matter what happens to Roe v. Wade, whether it is struck down or slowly eroded by seemingly benign restrictions, it won’t stop clinic escorts like Paula Schneider, Benita Ulisano, or me. We know someone has to be there to walk alongside a person in need and say, “I’m here. You are not alone.” People will always need abortions, and people will always need support. The nature of clinic escorting may change as the laws change; perhaps it will change from walking pregnant people into a clinic to helping them get to a state where abortion is legal. But the nature of the vested job will remain.

“We’re walking safety zones in our vest,” Ulisano says. “You’re at your best when you’re wearing the vest.”

Read this Next: Want to Fight Heartbeat Bills? Pay for Abortions 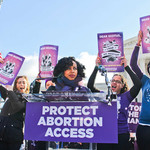 by Evette Dionne
The National Network of Abortion Funds is a network of local grassroots organizations that make the legal right to abortion actually possible.