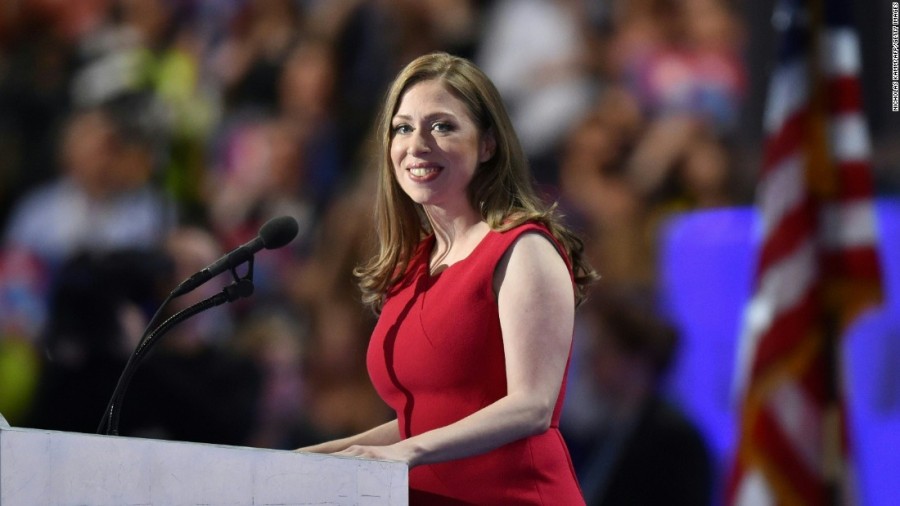 A couple of weeks back, something terrible happened, something so sick, so wrong, so unforgivable that it could not be ignored. Was it 45 signing an executive order to overturn years of EPA work on regulating air pollutants? It was not. Was it that same sitting president revealing that he does not know why the Civil War started? Again, it was not. Was it a police officer firing, with no provocation, into a parked car and killing a black teenager? Sadly, no.

It was Chelsea Clinton. On the cover of Variety magazine. Smiling. I KNOW, RIGHT?

From the internet’s reaction, you would have thought that Chelsea Clinton had cursed out a well-wisher, punched a kitten, or single-handedly prevented the final season of Game of Thrones from airing. “Why is she so happy?” demanded Politico reporter Annie Karni on Twitter. People were so outraged that Clinton had the temerity to smile as she was being photographed for the cover of a magazine that Chelsea herself responded on Twitter to set the record straight. That’s right: Chelsea Clinton was compelled to explain why her face was arranged in a cheerful, somewhat cheesy expression because people wanted answers, dammit.

Clinton was doing media to promote her new children’s book, She Persisted: 13 American Women Who Changed the World, but I guess it’s possible to see why people were confused. After all, 100-plus days after Donald Trump’s inauguration, Chelsea’s mother, Hillary Clinton, can barely open her mouth without causing thousands of journalists, pundits, and desk-chair quarterbacks to foam at the mouth as they furiously relitigate the 2016 election. Seeing another Clinton woman roll up to do anything short of publicly self-immolating live on CNN sends them into a frenzy. What’s she doing? Why is she talking? Who asked her something? Is she running for a thing? Is she? DEAR GOD IS SHE RUNNING?

For the record, Chelsea Clinton has not said she is running, or planning to run, for public office. In fact, she has begun clarifying on Twitter—sometimes more than once a day—that she is not currently running or planning to run for public office. It doesn’t matter. After more than 20 years of Clinton Derangement System, we’ve now met its sequel—and, spoiler alert, it’s packed with the same kind of “I’m not sexist, she just sucks” denialism of the blockbuster original. In a time when breaking news is defined ever more loosely, and more outlets than ever before are competing for clicks and eyeballs, a new Clinton is just the kind of easy, palate-refreshing target corporate media depends on.

Take Vanity Fair. After assuaging Donald Trump’s wounded ego by putting First Lady Melania Trump on its April 2017 cover, it wasn’t first out of the gate with a hit piece on Chelsea, but it definitely copped the douchiest attitude with the title “Please, God, Stop Chelsea Clinton From Whatever She is Doing.” Similar in tone, if more substantive in content, was a March 2017 Paste take titled “Let’s Nip This Chelsea Clinton Thing in the Bud.” Both pieces use the thinnest of premises to take shots at Clinton given that, again, media organizations speculating that she might run for something is not the same as candidacy.

The Vanity Fair piece’s subhead asserts that “The last thing the left needs is the third iteration of a failed political dynasty,” but its author, one T.A. Frank, doesn’t actually say anything about Chelsea Clinton and the Left. What he does complain about, among other things, are her “self-regard,” her disinterest in being interrupted (“When you are with Chelsea, you really need to allow her to finish,” notes an NBC producer in what Frank clearly hoped would come across as a scorching indictment), and her tweets. She’s not running, Frank notes, but we can’t trust her, because she once said that she might run if she felt called to do so! And you definitely can’t trust a former first daughter who insists on talking about current events and issues, unlike, say, Barbara Bush, who Frank notes approvingly “quietly works on her nonprofit.” Ultimately, the piece doesn’t need an actual reason to assert that Chelsea Clinton is “a public hazard.” It’s a  dumb, knee-jerk take that reeks of fragile masculinity, but it also fits perfectly into a canon of Clinton Derangement classics that publications like Vanity Fair can take straight to the bank.

We know that assorted Republicans and conservatives will never treat Chelsea Clinton with anything other than overt disgust, and don’t want to. (You can’t really come back from calling the 12-year-old First Daughter “the White House dog,” as Rush Limbaugh did when Bill Clinton first took office.) But so-called progressives who get apoplectic every time Chelsea Clinton opens her mouth in public are a different story. And it’s pretty hard to avoid concluding that it’s a deeply sexist one.

Stay with me, because I just said “sexist” in conjunction with a Clinton woman, and that often triggers the Clinton Derangement Syndrome Autoresponse to dislodge a torrent of all-caps references to Benghazi, Goldman Sachs, and blue-state elitism. But yes, when people’s biggest beef with a woman is that she’s just not quiet enough for their tastes, that she has opinions that she insists on airing (say, on a social-media platform literally designed for that purpose), that’s not a good look. When people, regardless of politics, are obsessed with whether that woman might possibly someday run for something, but maybe not, and regardless it’s not happening now; and when they seem far less concerned with the political daughter whose unelected, high-powered role in the current White House includes actually crafting policy—well, you know what they say about something looking and walking like a duck.

It’s notable that the progressives who object to Chelsea Clinton on progressive principle, those who assert that her mere existence in public is evidence of a nefarious Clinton aristocracy, are generally mum about political families that are not named Clinton. Take Caroline Kennedy, daughter of a Democratic dynasty so storied in U.S. history that it’s named after the fucking castle of a legendary medieval king. Kennedy, who served as U.S. ambassador to Japan from 2013 to 2017 under Barack Obama, is reportedly mulling a run for U.S. Senate, and has recently been floated as a possible presidential contender for 2020. She’s currently writing a memoir. She, too, has written books for children. Yet no young progressive writer, to my knowledge, has penned a 2,000-word screed on how this liberal Democrat needs to shut up and go away because UGH ANOTHER KENNEDY, THE LEFT CANNOT ABIDE THIS.

We are living through what is, arguably and indelibly, the stupidest and most mean-spirited time in recent history, and a staggering number of people will not survive it. (Coincidentally, these tend not to be the people who can’t imagine anything worse than Chelsea Clinton doing stuff, and who get paid to wring their hands about it.) Shaming Hillary and Chelsea Clinton—demanding that Hillary, for instance, take “full responsibility” for her loss, expecting Chelsea to slink away for no other reason than that she’s tainted by association—does absolutely nothing to mitigate or even address the actual dangers that are occurring in real time under the Trump administration. What it does do is shore up a corporate media that thrives on sensationalism by recycling age-old narratives that are ugly, unproductive, and yes, misogynist. We know that narrative exists: Why are we still so resistant to the idea that it affects all women, even those with a measure of power and acclaim? Or, more to the point, why can’t we accept that women whom we believe are unlikable for “legitimate” reasons are also subjected to misogyny?

If November had ended differently, we would still not be living in a post-misogynist world. Just as the election of Barack Obama and the media narrative around a “postracial” America emboldened white supremacists to take back “their” country, a Clinton win would have been spun into a similar myth about vanquished sexism. The next generation of women in public office may not have Hillary Clinton’s excess baggage—or her daughter’s—but they will still have a media that understands that our populace feeds on stories of women overstepping and demanding to be heard, and then demands their penitence. Chelsea Clinton may or may not be one of them, but watching how she’s treated is key to understanding that all women deserve better.

by s.e. smith
Clinton is caught in the unwinnable trap of needing to avoid the appearance of being overemotional while also not looking cold, and it’s landed her square in the crosshairs of the conspiracy theory factory.