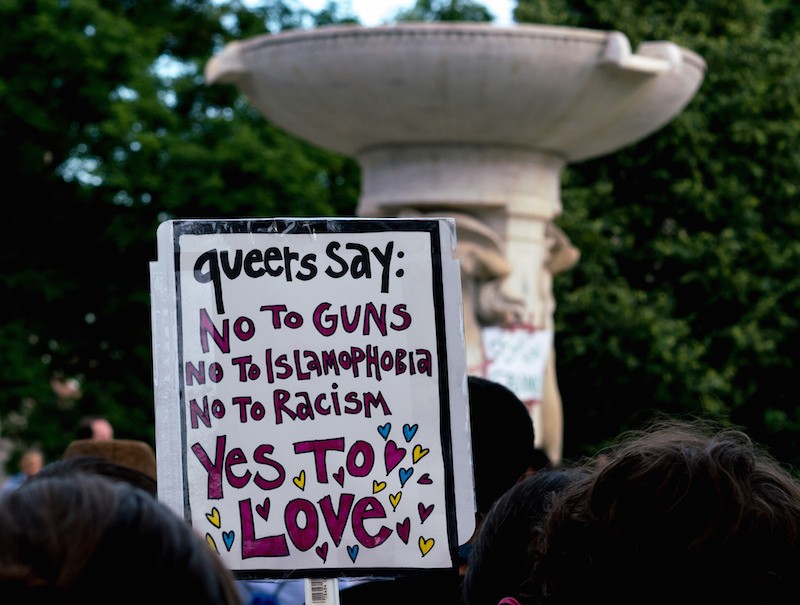 A vigil for Orlando in Washington, D.C. this June. Photo by Victoria Pickering (Creative Commons)

This essay includes racial and homophobic slurs that some readers may find triggering.

Last June, I heard the news that nine Black people were murdered in a church in Charleston, South Carolina and my heart pounded in an attempt to escape my body. A year later, 50 people were killed in Orlando’s Pulse nightclub and another 53 were wounded. My breath is shallow; my lungs want to inhale life, but not too loudly, because what if someone that hates me hears my lifestyle in my breathing?  A month later, I see a video of Alton Sterling lying on the ground in Baton Rouge, stuck between concrete and the bodies of white police officers. I cry myself to sleep. A day later, I go to a Black queer friend’s Facebook page to wish them a happy birthday,” and I see a video of a man being shot by a police officer while sitting in a car. His blood overwhelms his body and my psyche. His girlfriend is silent and a child cries. This is Black trauma. This is queer trauma. These traumas seem to happen back to back, like clockwork. As a black queer man that identifies as femme, it has always been apparent to me that the whole of who I am will never be safe from the traumatization and violence of this world.

I did not have a queer childhood or a Black childhood; I had a Black queer childhood. The patriarchy conditioned me into gender violence and homophobia in intimate and global ways. Boys act like this, they said with their words, their hands, and their rules. I was cradled between being a fetish and a danger. Sometimes, even in the same day, if I expressed any emotion that did not align with the image of a docile Negro child, I was seen as an enraged danger. When not being called a faggot, I was being suspended for being a Black boy. When not being called a nigger, I was being sexualized before I even understood what sex or my body was. In Black queer childhood, our flesh is burned by multiple interlocking systems at once. The Black queer childhood suffering is a unique experience, not a perpetual competition of two opposing struggles. My childhood is my own, but it is not unique, which I hear when I speak to other Black queer people. I’ve always known there needs to be more work done to study the specific traumas of this Black queer experience.

As I got older, it did not get better. The theoretical “it” got more complex as I dealt with intimate homophobia from the Black community and violent white supremacy from the LGBTQ community. This is not to suggest that the Black community is more homophobic or transphobic than the rest of the country, but that this is the community I belong to, so the homophobia and transphobia, for lack of better words, was special. What is also special is my need for safety inside of my racial community in the face of police brutality and other tools of white supremacy. Being Black and rejected from community is not only a misfortune when a whole race is under siege. It is a danger.

On the other side, there is the invasive allegiance to white supremacy that exists in the LGBTQ community. The belittling of my Black queer voice in professional and social LGBTQ spaces forced me to question if I would ever be heard. My experiences were not valued or validated by white-dominated LGBTQ institutions and spaces. Like homophobia in the Black community, racism in the LGBT community is also intimate. Even if you successfully dodge a white man’s objectification of your body, you might still encounter a rejection of your Blackness via dating apps and white gay bars where you are the only, or are one of few, Black bodies.

When the Orlando Pulse shooting happened, I broke into pieces. Then, I saw Alton Sterling shot, and the pieces turned into dust. That is a unique magic trick that I only know from being a Black queer person. The universal skill that I see in the Black queer community and other people who exist at intersections is the ability to find joy in survival. Observers call it strength and resilience, but it is a part of our DNA and conditioning.

Our other skill is the ability to find delight in our transgressions. Even after we are made aware that reactions to our subversiveness can be brutal, can lead to our arrest, our deportation, our death, we continue to delight in not giving into the mainstream culture. This method of coping with trauma operates like clockwork, too. We move forward, moment by moment. Despite the heinous state of the world, we are going to live. 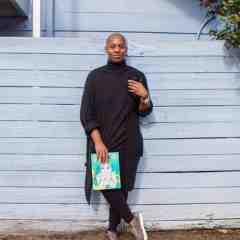 Myles E. Johnson is a writer located in Atlanta, Georgia. His work spans between critical and personal essays, children’s literature and speculative fiction for adults. Johnson focuses on black and queer identities, and specifically, the intersection of the two. Johnson’s work has been featured in NBCBLK, Huffington Post, Out Magazine and The Guardian.

by Amy Lam
A hard but necessary conversation.