Does the "Collateral Beauty" of Fatherhood Come at the Expense of Mothers? | Bitch Media

Does the “Collateral Beauty” of Fatherhood Come at the Expense of Mothers? 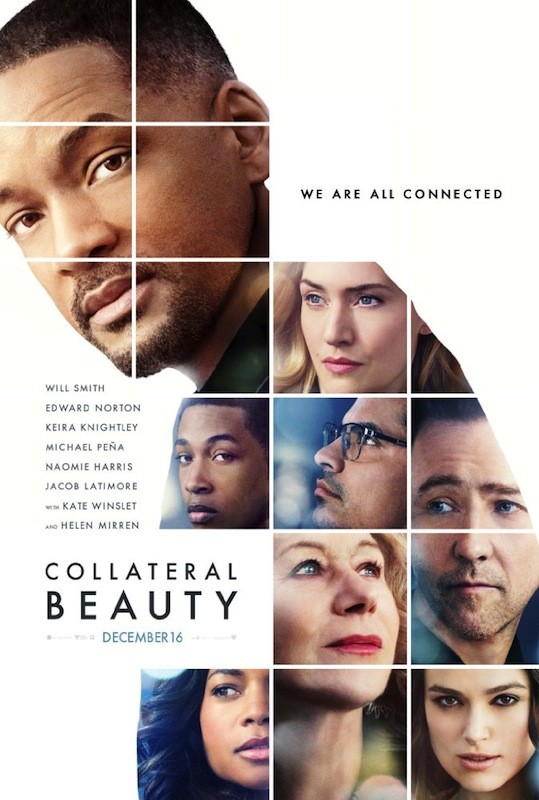 The idea that love, time, and death connect every single human being on earth is one of the main themes running through Collateral Beauty, a feature film that comes out in theaters across the country this weekend. The film opens with protagonist Howard (Will Smith), the owner of a successful marketing firm, motivating his large team by pointing out the common denominators all humans share: “We long for love, we wish we had more time, and we fear death.”
The opening scene is the only time we see Howard’s vibrancy.  The film then jumps to four years later, after his six-year-old daughter’s death, which has left him heartbroken, furious, and emotionally removed. Rather than talk to his friends and colleagues, he writes letters to Love, Time, and Death. When they appear as people (in the form of Keira Knightley, Jacob Latimore, and Helen Mirren), Howard begins to find his way back to his life.

Set in New York City in December, the film is a twist on A Christmas Carol with its male curmudgeon who is visited by ghostlike figures who function as mirrors, pointing out the Scrooge in all of us and urging us to stop taking life for granted. Howard eventually attends a support group of grieving parents where the leader, Madeleine (Naomie Harris), defines collateral beauty as “the profound connection to everything,” which is sometimes easier to notice when in a state of profound grief. With twinkling white lights and snowflakes falling on cue, this holiday movie has a feel-good message that would be formulaic without its somewhat surprising focus on masculinity.

The film’s representation of manhood and fatherhood is important. A grieving Black father is not something Hollywood tends to offer up in abundance, and in a time when toxic masculinity is elbowing its way to the center of politics and culture, that’s crucial. Howard is one of a group of male friends struggling with regret and responsibility. His friend Simon (Michael Peña) is dying of cancer and struggling with the pain of leaving his wife and two-year-old son behind. Another friend Whit (Edward Norton) cheated on his wife, lost his marriage and his daughter’s trust in the aftermath, and is fighting for a relationship with her, which requires overcoming his own ego and pride. If masculinity, as hegemonic heteronormativity has taught us, is a hardened shell meant to protect men from the disappointments and travails of life, then the guys in this film are intentionally aiming to crack it open. It’s refreshing to see men waging this worthwhile struggle. More of this, please.

Is it possible to explore underseen dimensions of masculinity and daddyhood without excluding female characters and mothers? Everyone focuses on Howard’s loss of his child, but there is no mention, for much of the film, of the loss of a spouse or his daughter’s other parent. About halfway through the film, we find out Howard is part of what Madeleine calls “the 79 percent,” which she explains is the percentage of of couples who divorce after the loss of a child. For most of the film, Simon hides from his spouse that he’s dying, while Death (Helen Mirren) tries to convince him to tell her. His wife is never shown interacting with their son and is only in the movie for a blip at the end, asking Simon if he’s okay, even though in the end we find out she already knows (although dreading) the answer. Whit’s ex, who never shows up onscreen, is a bitter and money-hungry woman who has hooked up with a rich and well-connected guy to heal her betrayed heart.

The only mother we see regularly is not a mother at all. Claire (Kate Winslet), another close friend of Howard’s, pines to become a mom but is getting older and feels like she’s working against the clock. We see her looking at sperm donor websites and brochures. Seeing more face time of the white female professional who wants to become a mom than the women of color who already are mothers is a grand oversight.

The absent- and dead-mother plot, common in children’s fiction and Disney films (The Little Mermaid, Snow White, and Cinderella, for example), is a tradition whose time is up. The Pursuit of Happyness had a similar formula, wherein Smith played a single dad trying to get back on his feet after his son’s mom had abandoned them. Complex representations of fatherhood shouldn’t require the erasure of moms, especially when women still carry the brunt of parenting. While single fatherhood is on the rise, women are four times more likely to be the head of a single-parent household than men.