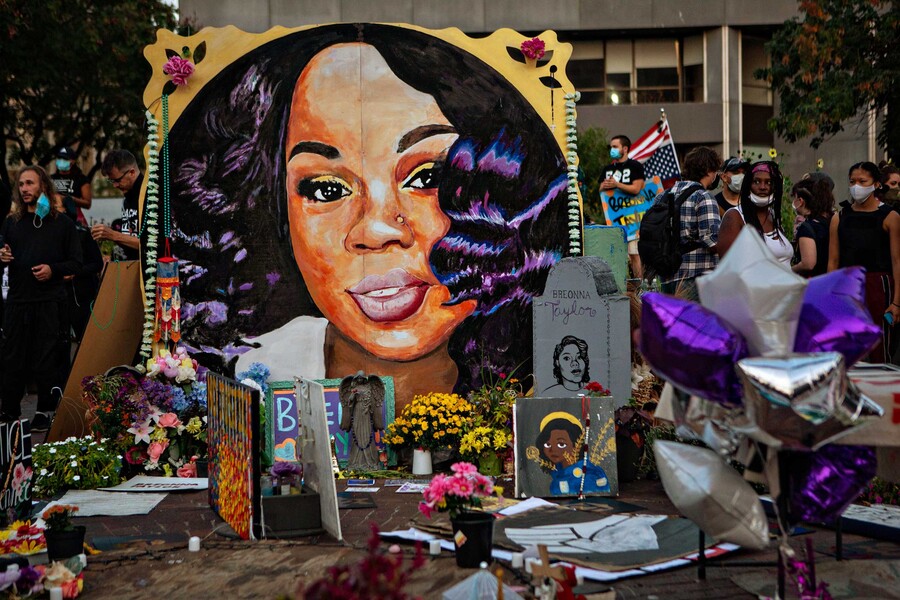 In early May, the Washington Post helped bring Breonna Taylor’s name into national consciousness with one of the first stories to report on the three Louisville, Kentucky, police officers who murdered the 26-year-old woman as she slept in her own home. Taylor had been dead for more than seven weeks by the time the Post’s report was published, her death a mere blip on the national radar. Though the three officers who, in the course of executing a search warrant, fired approximately 20 rounds into Taylor’s apartment—a notable example of police overreach if there ever was one—her death was so overlooked that her mother, Tamika Palmer, pleaded for a wider audience to hear Taylor’s name—almost as if she knew how easily her daughter’s memory could be erased from ongoing conversations about ending police violence. “Not one person has talked to me. Not one person has explained anything to me,” Palmer told the Post. “I want justice for her. I want them to say her name. There’s no reason Breonna should be dead at all.”

In the months that followed, however, Taylor’s name has become a rallying cry central to protests calling for an end to police brutality, an end to militarized policing, an end to police entirely. As Taylor’s death became synonymous with the deadliness of no-knock warrants and the impenetrable shield of protected immunity, her likeness has become unavoidable as well: emblazoned on magazine covers, billboards, t-shirts, memes, and more. It even inspired BreonnaCon, a four-day event in Louisville planned by the social-justice advocacy organization Until Freedom. The late-August gathering brought a flood of organizers, activists, and celebrities to Louisville to secure positive press, receive sponsored swag bags, and participate in a “massive demonstration” that included workshops, nonviolent direct-action training, a community barbecue the organizers dubbed “Bre-B-Q.”

It also offered clear evidence that Taylor’s likeness had been commodified by those who want to signal their commitment to social justice. Though a “community convention” is an idea worth pursuing, particularly if it brings attention to Black women victims of police violence, what’s to be gained from using a press release to name some of the celebrities planning to attend? Until Freedom cofounder Tamika Mallory, a noted police violence activist, told The Root that Palmer agreed to using her daughter’s likeness for the series of events. “When one of the younger organizers suggested ‘Bre-B-Q,’ her mom, with tears in her eyes looked at me and said Breonna would love Bre-B-Q, that would be really special,” Mallory said. “The work that Until Freedom is doing has helped Breonna’s name to trend more than once, including yesterday. Under normal circumstances, Black women fade from the media very easily when these types of situations happen.”

When families are grieving an incalculable loss and activists with national platforms promise them the world—or in this case, that strategically deploying celebrities will bring more awareness to their cause and secure some semblance of justice—is there even space for them to decline an opportunity to put their loved one’s face on merchandise? Intentions matter, but so does impact. And BreonnaCon’s PR push raised an important question: What message is sent when Taylor’s needless death is used to get sponsors to give products for gift bags? In many respects, the name “Breonna Taylor” has become a measuring stick: If we speak it as a form of praxis, then we must be embedded in the fight to secure her family justice in whatever form feels appropriate to them. We can proclaim that we’re fighting on her behalf to reform an irredeemable system, even when the methods are unconventional (or, as Mallory declared them, “creative”).

But as The Appeal’s president Josie Duffy Rice proclaimed on Twitter, it’s impossible to secure justice for anyone who is murdered in their home as they sleep. “We can argue about whether arresting the officers is accountability, or what accountability would be,” Rice tweeted. “But there is no such thing as justice here.” Taylor’s family will receive a $12 million settlement for her death and one officer has been indicted for shooting into her neighbor’s apartment, but justice will forever elude those closest to her. She’s dead long before she should have been, and that’s an injustice that can never be righted. If anything, Taylor’s death has become emblematic of a recurring issue that we can at least attempt to address: Black women victims of police violence who, in death, are treated as if they’re disposable, their names evoked only to sell magazines and increase social-media engagement.

On May 26, the afternoon 46-year-old George Floyd’s life ended under the knee of Minneapolis police officer Derek Chauvin, less than 100 people showed up to honor Taylor’s life at a rally in Louisville. But as Floyd’s death—captured on video and spread across the internet—has garnered the attention of politicians, athletes, celebrities, organizers, and everyone in between, and inspired a national #BlackOutDay, the nationwide commemoration of Juneteenth, and mass protests in every city in the United States, Taylor’s death has come to feel like a last-minute addendum. After Floyd’s murder, thousands of people gathered in Louisville to protest in her name. Portraits of Taylor were published on the covers of O, the Oprah Magazine and Vanity Fair, the latter of whom made her the centerpiece of a Ta-Nehisi Coates–edited special edition about racial justice. Beautifully illustrated portraits of Taylor’s face circulated on social media, coupled with demands for us not to forget her name, not to forget what happened to her in her own home.

Change.org, which broke its own record when a petition to charge the officers who killed Floyd accrued one million signatures in 24 hours, hosted a petition to help secure “justice” for Taylor’s family. These images and actions have made it seem as if we always collectively cared about Taylor’s death, but what if Floyd had not died? What if Floyd’s death had not come mere weeks after a video of white men following Ahmaud Arbery through a wooded area in Georgia, literally hunting and killing him? Would there still be mass mobilization, six weeks after she’d been killed? Would artists be using their talents to help spread awareness about her senseless murder? Would celebrities be descending on Louisville for a convention? Would we care? Black men have long dominated the police-brutality narrative as both victims and organizers. As I’ve written before, we can clearly recount the names of Black men killed by police officers and recall the terrible details of their murders.

Many of us can say without hesitation what transpired in the final moments of Michael Brown Jr.’s life on August, 9, 2014 in Ferguson, Missouri; as well as in those of Eric Garner, John Crawford III, and 12-year-old baby Tamir Rice in 2014; Freddie Gray in 2015; and Philando Castile and Alton Sterling in 2016. Our minds retain their deaths because activists and journalists have ensured that their names aren’t forgotten, that entire movements continue in their names. There’s a good reason for this: Without the groundwork laid by Black Lives Matter and a number of other organizations, the insistence that policing functions as an effective cornerstone of community safety would still be conventional wisdom. Without their elevation of these victims, used in part to establish a pattern of unchecked brute force by police, we might not have databases that now track the number of people killed by the police each year in the United States.

Amber Guyger, the off-duty police officer who in 2018 shot 26-year-old Botham Jean in his own Dallas, Texas, apartment, would likely still be on the streets had organizers not spent years making clear that deaths like Jean’s are senseless, unjustifiable, and worthy of prosecution. There’s good in that. There’s also a price we collectively pay when we know these men’s names, but know comparatively little about the Black women killed by police. When Black men like DeRay McKesson and alleged scammer Shaun King shape the police-brutality narrative while women organizers including Andrea Ritchie, Mariame Kaba, and Johnetta Elzie do the work with little national recognition, it perpetuates a gendered disparity in coverage and in remembrance. Leaving Black women on the margins of the police-brutality narrative makes us appear less vulnerable to its reality. But history has disproved this over and over.

Breonna Taylor is not just a figurehead for a movement that she will never see the benefits of.

In the Civil Rights protests of the 1960s, Black women were regularly sexually assaulted in droves by police officers, primarily in the South, and then intimidated into silence. Voting-rights activist Fannie Lou Hamer and some of her fellow women organizers were thrown into a Mississippi jail and brutally beaten by police for daring to register Black voters. Daniel Holtzclaw, the Oklahoma cop who was convicted in 2016, chose his victims—Black women, many of whom were sex workers—precisely because he assumed no one would believe them. When Black women are a footnote, it leaves us open to more violence—much of which goes unnoticed on a national scale, as Taylor’s did for seven weeks. There’s nowhere to go from here, other than continuing to push for a world without police that still finds a way to protect Black women from intimate-partner violence, but as that fight continues, here’s what’s worth remembering: Breonna Taylor is not just a figurehead for a movement that she will never see the benefits of.

She was a Black woman, an essential worker, a daughter, a sister, and a partner who had the keen ability to bring her family together and help them envision a world bigger than the one they’d inherited. She had a vision for her life, measurable goals, and a searing hope that 2020 would be the year that pushed her in a new direction. She was flesh, blood, and bone, and she deserves to still be here rather than existing solely in her family’s memories and in snapshots shared across social media. In the absence of the justice that will always elude Taylor and her family, let us hope for something both complex and simple: that we remember her without capitalizing on her likeness, that fighting in her name doesn’t line anyone’s pockets outside of the family she left behind, and that she may be one of the last names we have to utter in the fight to end police violence.

Read this Next: Even in Death, Breonna Taylor Is Being Disrespected 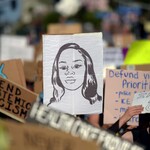 by Mary Retta
It’s painful to think that a cute internet joke is needed to rile people up after the death of a Black woman.