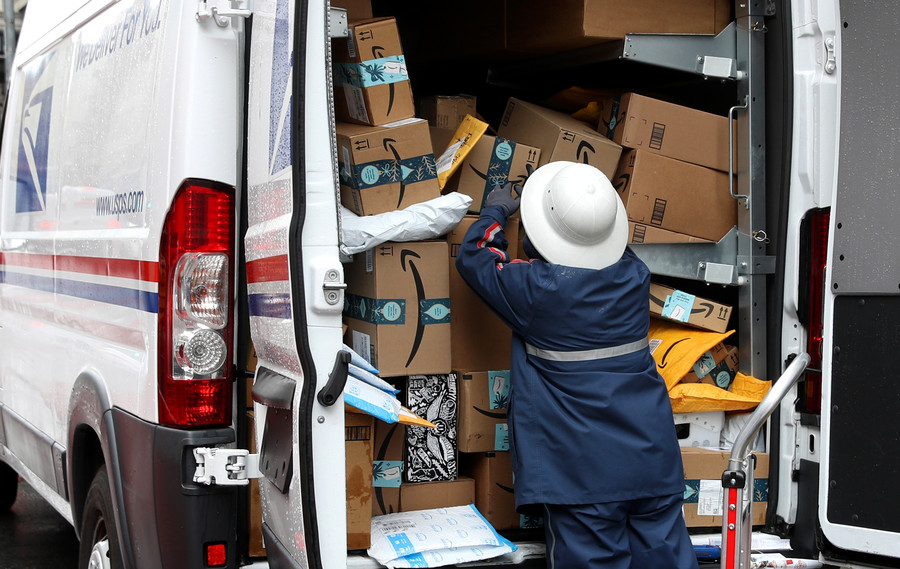 It’s April 2020, and every time I check my inbox, I’m overwhelmed by promotional emails. Every store from Madewell to True & Co. to Nisolo is having some sort of major sale, and most of them include free shipping. Even Everlane, a sustainable-ish brand notorious for its lack of sales, is offering an unheard of 25 percent off sitewide. And it’s not just fashion retailers that are fighting for my dollar—in my inbox, Target, Petco, and 7-Eleven (which has my email address for some inexplicable reason) are also boasting special promotional deals.

For folks like me who struggle with online shopping, the compulsion to take advantage of the constant influx of deals during the COVID-19 pandemic is strong. Whether we’re panic-buying household products out of fear of shortages, stocking up on shelf-stable foods to prepare for what will likely be at least several more months of sheltering in place, or purchasing inessential items we know we really don’t need (or can’t afford) because it’s our only coping mechanism, it has become nearly impossible to detach our emotions from our shopping habits. Marketing campaigns have always preyed on consumers’ emotions to turn a profit, but in this moment, people are more vulnerable to emotional spending than ever before. As the number of COVID-19 cases rises and feelings of stress, anxiety, and uncertainty overwhelm us, the current global health crisis has created the perfect storm for people who struggle to keep their shopping habits under control.

I’m a member of a private Facebook group called Low Buy Beauties, an online space that functions as a digital support group for people—primarily women—who struggle with compulsive shopping. The group was created by a Toronto-based vlogger named Christina, who openly shares her experiences dealing with shopping addiction with her more than 30,000 subscribers on the YouTube channel Style Apotheca. Currently, the Facebook group has more than 2,400 members, and recently, the number of posts from members sharing their struggles has ballooned thanks to the pandemic. “I have definitely noticed that I have a need to check and shop online when there is a lot of stress going on,” Ana Ageljić, a Croatia-based member of Low Buy Beauties, told Bitch. “The current situation has put me [under] a lot of stress because I was in another country, and I didn’t know if I could get home because some countries in Europe have closed [their] borders. When I finally got home, I had to be in quarantine for 14 days. So, I purchased some skincare [items] and art pieces to comfort myself. I am totally aware that I did this because of the situation.”

Reva, a Cincinnati-based member of the low-buy Facebook group, is having similar struggles. “I have a history of compulsive shopping,” she told Bitch. “Since the global pandemic, I have started shopping online. [At first], it was only for food and personal hygiene supplies. [But] now I have a cart sitting in Amazon, and I have a few boxes headed this way with three dresses and a pair of shoes. Since [I] really can’t afford to splurge on clothing right now, I am biting my [nails] and trying to at least let the [Amazon] cart sit for a few days.” For people who struggle with compulsive shopping, delaying a purchase or “letting the cart sit for a few days” is a strategy designed to curb shopping impulses. By delaying the instant gratification of online shopping, compulsive shoppers are given time to “cool off” and reassess whether their purchase is truly necessary. Letting my virtual shopping cart sit has stopped me from making many irresponsible clothing purchases when I’m fighting the urge to binge-shop at two o’clock in the morning.

In addition to the recent surge in stress-buying, many brands are struggling to stay afloat, and consumers are feeling extra pressure to support their favorite shops out of fear they may close. While businesses across the board have been affected by the current global crisis, retail stores have been hit hard by a wave of physical store closures and plummeting sales. Two days before Everlane launched their unprecedented promotional deal, VICE reported that the company laid off more than 120 of its employees, in addition to furloughing 68 full-time workers. When the news broke, former presidential candidate Bernie Sanders accused the brand of attempting to squash unionizing efforts. Other major retailers like Macy’s, Gap, and Sephora have also either laid off or furloughed employees, or cut employees pay. During this so-called “retail apocalypse,” it’s estimated that as many as 15,000 retail stores could shutter in 2020 alone.

Though I feel no pity for wealthy CEOs whose businesses exploit minimum-wage employees or allegedly punish workers seeking to unionize, my heart breaks for the hundreds of thousands of retail workers who have lost both jobs and healthcare in the midst of an unprecedented health crisis. And as the daughter of a struggling small-business owner, I empathize with independent shops that are currently scrambling to stay in business. In the past month, I’ve witnessed an outpouring of well-meaning support from individuals looking for ways to help their favorite businesses stay afloat. As physical stores have shuttered and more retailers have begun offering free shipping, many consumers have decided to buy digitally, either as an attempt to support businesses or to adhere to social distancing guidelines. However, with the sudden shift toward increased online shopping, there has been an unintended casualty—the United States Postal Service (USPS).

Since most states have social distancing orders in place, and people are strongly encouraged to isolate in their homes whenever possible, Americans are relying on the USPS more than ever before. While the USPS reported a decrease in the volume of mail they received in 2019, package-delivery volume has only increased—and will likely continue to increase throughout the COVID-19 pandemic. From household essentials like toilet paper and cleaning supplies to non-essential items like haircare products and video games, consumers are opting to order online and have their purchases delivered directly to their front doors. Unfortunately, post offices across the country are quickly becoming overwhelmed by orders, and in many areas, mail and package deliveries have been severely delayed. On April 1, a New York City–based Twitter user named Caroline McCarthy tweeted, “My neighborhood has had no mail delivery for a week.” With more than 140,000 confirmed cases (at time of print), New York City is currently the U.S. region hardest hit by COVID-19.

For folks who are elderly, disabled, or immunocompromised (or who come into close contact with people who are elderly or immunocompromised), the ability to ship necessary goods to their homes is vital to their survival. Elderly and immunocompromised individuals have been advised to self-quarantine as much as possible, and many disabled people depend on delivery services like Amazon Prime because they’re unable to shop in physical stores or transport items to their homes without assistance. Additionally, these at-risk populations may rely on the USPS to deliver essential medications, especially when visiting a pharmacy increases the risk of exposure to illness. According to Fortune, “[The USPS] delivers about 1 million lifesaving medications each year and serves as the only delivery link to Americans living in rural areas.” For at-risk folks, the USPS is absolutely crucial to their wellbeing.

Unfortunately, even with an increase in package delivery volume, the USPS may be on the brink of collapse. According to Vox, “The Postal Service ran nearly $9 billion in the red in its 2019 fiscal year,” due to its decreasing volume in first-class mail; early projected figures expect the Postal Service to go bankrupt by 2024. But since the emergence of this pandemic, lawmakers are warning that without additional funding the USPS may have to cease normal operations as soon as June 2020. In addition to serious threats to its livelihood, the USPS is facing severe staffing shortages across the country as thousands of workers have either fallen ill or entered quarantine to slow the spread of the virus.

Though the pandemic is driving many people to panic-buy unnecessary items, people who struggle with compulsive buying are looking at their online shopping habits in a new light.

So, is there anything we can do? Though this information should be extremely worrying, it should also serve as a necessary wake-up call for Congress—the Postal Service is in desperate need of government support ASAP. While the $2.1-trillion Coronavirus Aid, Relief, and Economic Security Act (CARES) that offers the USPS a $10 billion line of credit, the Republican-majority Senate scaled back the House’s original version of the bill that would’ve given the Postal Service $25 billion in direct aid and $11 billion in debt forgiveness. The Senate’s curtailing of the CARES Act falls in line with Republicans’ longstanding attempts to force the Postal Service to privatize, but the USPS is an essential government service that millions of Americans rely upon to survive. Privatization would only further endanger the most vulnerable populations in the United States. Right now, we need to hold senators accountable. (An easy way to do that is by texting “USPS” to 50409, which will trigger Resistbot to send a letter urging your state legislators to support the Post Office.)

Aside from advocating for federal government intervention and better worker protections, consumers are reexamining their online shopping habits. Though the pandemic is driving many people to panic-buy unnecessary items, people who struggle with compulsive buying are looking at their online shopping habits in a new light. “Knowing that there are people working in warehouses unprotected and overwhelmed is cause to stop and think, ‘Do I really need this stuff?’” Reva tells Bitch. She also notes the importance of seeking treatment if it’s an available option, adding, “If someone has a shopping addiction, I would suggest an e-visit with a therapist [if possible]. There are [many] ways, like [Cognitive Behavioral Therapy], that can help with the compulsion to shop.”

Of course, compulsive shopping can manifest as a very serious mental health disorder, and making people feel guilty for their purchases only creates a cycle of shame that frequently makes the problem worse. I’m not here to judge anyone for their coping mechanisms during a global health crisis; we’re all doing the best we can. However, if taking the time to reexamine the purchases I make online—and untangling the emotions I’m feeling from the act of shopping itself—means that I’ll be putting less burden on the Postal Service and giving elderly and disabled people a better chance to receive the deliveries they need, I will try my best to fight that compulsion. Even if that means just letting the cart sit for a few days.

Read this Next: Manipulation By “Transparency” 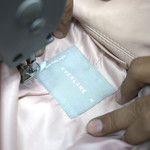 by Jasmine Garnett
“Ethical fashion” has long been a phrase used to lure customers.