At the Border, Religious Beliefs Are a Tool—and a Weapon | Bitch Media 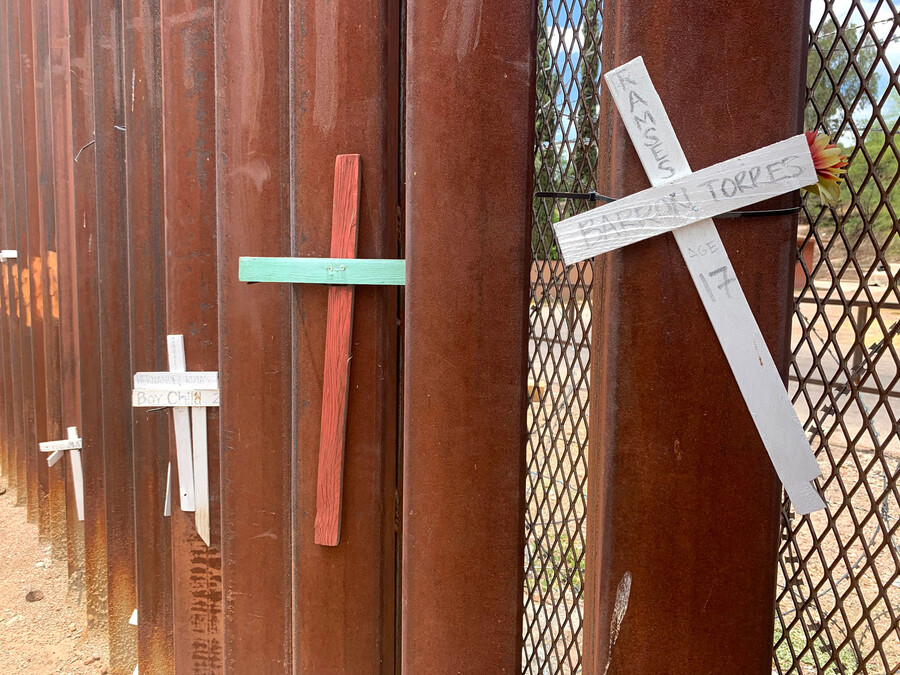 Religious artifacts and devotional objects—weathered rosaries, soggy prayer cards, chipped votive candles—litter the migrant trails crisscrossing the Sonoran Desert. Shrines double as way stations for migrants: resting places where many leave behind coins, photographs, and even garlic believed to protect against snakebites. A friend once found a manual in the desert stamped with a Jehovah’s Witness label. The guidebook was opened to a chapter titled “porque hay tanto sufrimiento?” (“why is there so much suffering?”) Coyotes typically limit how many items migrants can carry during the journey, concerned that heavy backpacks will slow people down and affect their arrival time. I often wonder about the person who packed that Jehovah’s Witness manual, deeming it essential for the journey and perhaps sacrificing something else—a can of tuna, a water bottle—to carry it across a border. For many migrants, religion is life-sustaining; migration itself is religious activity—a pilgrimage made up of rituals and rites of passage.

My own family migrated to the United States sin papeles (without papers) after my parents converted to Christianity during the Argentine Great Depression in the late ’90s. Inspired by the stories of Abraham, Moses, and other Biblical figures who migrated for survival, we journey to the place they envisioned as one of milk and honey. To this day, my dad’s email address includes “Exodus 34:10,” a verse in which YHWH promises Moses and his descendants prosperity in a new land. Like many migrants who traverse the Sonoran Desert’s desolate mountainous trails, our border-crossing journey might be described as a religious one. Borderlands humanitarian organizations also draw on religion to defend migrant aid work.

No More Deaths—a humanitarian organization based in southern Arizona—includes faith-based principles in their mission statement. After four volunteers were convicted in 2019 for operating a motor vehicle in a wilderness area, entering a national wildlife refuge without a permit, and abandoning property in Cabeza Prieta National Wildlife Refuge, No More Deaths gained widespread attention for invoking the 1993 Religious Freedom Restoration Act (RFRA) to challenge the state. In February 2020, U.S. District Judge Rosemary Márquez cited the 1993 law when she reversed the volunteers’ convictions and ruled that their faith-based activism was protected by the law, which instructs that the “government shall not substantially burden a person’s exercise of religion.”  Scott Warren—the No More Deaths volunteer whose felony case became emblematic of the government’s criminalization of “basic human kindness”—was also acquitted for “abandonment of property” on religious grounds.

RFRA is most commonly associated with headline-grabbing cases like those of Hobby Lobby and Jack Phillips, the Colorado baker who refused to make a wedding cake for a gay couple. So when it was mobilized to defend—rather than deny—human rights, liberals, and the religious left rejoiced. While I too celebrated that these activists would not be imprisoned for their aid work, these cases led me to consider what religious freedom claims suggest for the future of progressive movements. What is at stake if we are only able to defend activists who are willing and able to articulate a religious motivation for aid efforts? Who is being protected by RFRA—beyond white allies with class and racial privilege? Aid workers are able to successfully mobilize their religious convictions to defend their actions, but migrants—who are also largely Christian—are not afforded the same protections. The border, in this sense, creates racialized hierarchies of value, artificially separating people who participate in a shared religious tradition.

For the many years my family lived undocumented, religious liberty did not protect or defend our violation of federal law. It did not grant us an exemption, nor did it guarantee our freedom. RFRA has been largely unsuccessful at defending migrants, though Katherine Franke, faculty director of the Law, Rights, and Religion Project at Columbia Law School, told me that a family in Texas cited Christianity’s respect for the family in an attempt to halt their father’s deportation. In 2018, Franke filed an amicus brief in support of Warren and later praised Márquez’s decision as a “significant defeat for the Department of Justice in its effort to protect religious liberty rights only when they advance the White House’s political agenda.”

Franke’s Law, Rights, and Religion Project’s November 2019 report “Whose Faith Matters? The Fight for Religious Liberty Beyond the Christian Right” debunks the idea that religious liberty primarily advances the interests of right-wing conservative Christians, and shows how members of various religious groups have taken to the courts to provide food and shelter to immigrants, perform marriages for same-sex partners, access abortion services, protest war and the death penalty, and protect the environment. During our conversation, Franke explained that the passage of RFRA was, ironically, delayed by the U.S. Conference of Catholic Bishops, who feared that abortion-rights activists would make a faith-based claim based on respect for the family or bodily integrity. The left has long mobilized this law. After Franke pointed out that Native Americans in federal prisons have successfully argued for sweat lodges and baths for purification ceremonies, we discussed the construction of religion as a colonial category. I asked Franke, when we invoke religion in a legal sense, is it inevitably tied to Protestant Christian ideas of “sincerely held,” individual and interior belief?

What does it mean that in the language of the Sonoran Desert’s Tohono O’odham Nation, there is no direct translation for the term “religion?” (“Himdag,” meaning something like “cultural values,” is the closest synonym.) Franke agreed that Abrahamic faiths largely determine what counts as religion. “When you try to argue that your tradition of beliefs is religious in nature, you want to make it look like one of the more traditional religions as much as possible and for some, that itself is a kind of violence,” she said. 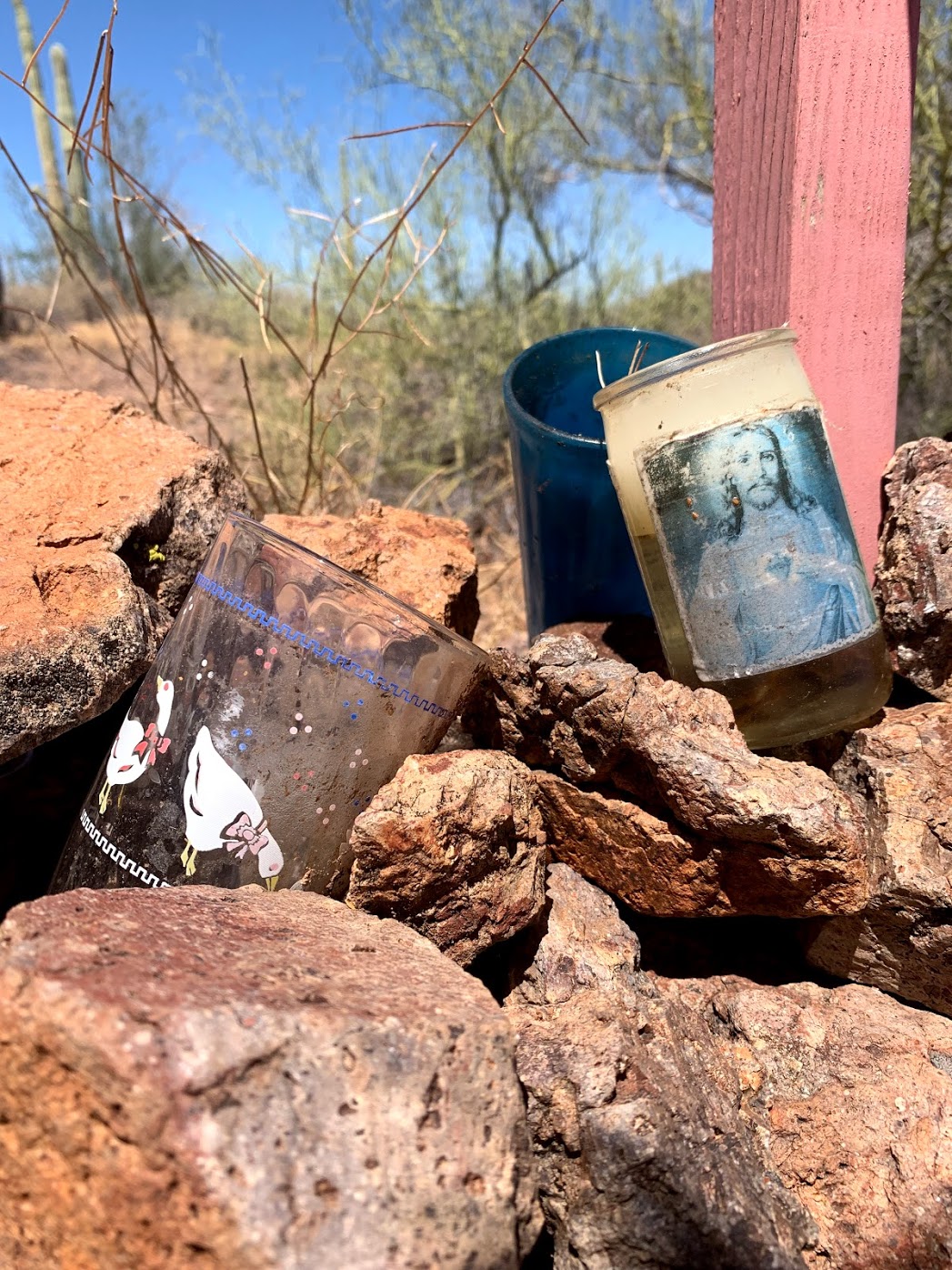 Tisa Wegner’s 2017 book Religious Freedom: The Contested History of an American Ideal engages with this issue, exploring how religious and racial minority groups have invoked religious freedom to gain recognition and rights “within the racial-religious hierarchies of the U.S. empire.” Wegner points out the predictable limits of this strategy: to successfully defend their religious practices, these groups had to adhere as closely as possible to white, Protestant ideas of religious freedom. African American leaders during the Civil Rights Movement, for insistence, invoked Black liberation theology that insisted all lives are created with dignity. But groups that were outside the bounds of Christianity—such as the Nation of Islam or the Moorish Science Temple of America—were portrayed derogatorily as “cults,” or as racialized political movements.

In her 2009 monograph, We Have a Religion: The 1920s Pueblo Indian Dance Controversy and American Religious Freedom, Wegner shows how Pueblo Native Americans had to transform their traditions to fit dominant models for what counted as religion. To defend Indian dance practices against government restrictions, they had to show their similarities to Christian prayer and worship, achieving recognition only after making their rituals legible to a Protestant audience. Though the four No More Deaths volunteers charged with misdemeanors affiliate themselves with Unitarian Universalism, Warren is not a member of any congregation and does not regularly attend church. In fact, during a pretrial hearing, his father testified that he raised Warren in “the church of the great outdoors.” When Warren and I met for coffee during his first felony trial, he explained that the desert is haunted by sacred energies—the land scarred by the restless spirits of dead migrants. The 37-year-old geographer’s humanitarian aid activities are an attempt to commune with these sacred forces; whenever he finds a dead body, for instance, Warren performs a ceremony to honor their loss and offer them peace.

Aid workers are able to successfully mobilize their religious convictions to defend their actions, but migrants—who are also largely Christian—are not afforded the same protections.

While RFRA does protect such “alternative” or “spiritual” practices, it was not enough for Warren to say secular motivations guided his work. The activist had to use the language of religion, ritual, and belief to defend his actions. Despite the ways that activists reappropriate the language of religious liberty, RFRA still requires that we make ourselves legible within a “secular” society that is undeniably an extension of Protestant Christianity. Indeed, toward the end of our conversation, Franke warned of “borrowing tools from the right” to defend progressive causes. “Normally, if you don’t agree with a proposed law, you lobby, call your elected officials, and try to prevent that law from getting passed. Once it’s passed, and you go back into the democratic process, you try to elect different people or have the law repealed. Religious-liberty claims seek an exemption from the law and bypass the democratic process.”

Franke pointed out that Martin Luther King, Jr. and his contemporaries ultimately chose to endure the pain of incarceration to prove the depth of Jim Crow’s violences and the “moral bankruptcy of the state.” Their resistance led to changes in the law, rather than exemptions from them. I am in no way discounting the strategies activists have developed to continue providing humanitarian aid in the militarized borderlands. At the same time, I invite progressives to consider how religious freedom might be limited to those who are willing and able to claim a set of “sincerely held” beliefs. Where does this leave us? Do we use all of the tools available to our movements to challenge the state’s selective enforcement of the law? What are the implications for those of us who cannot or simply refuse to frame our activism in Protestant Christian terms? When is it better to do the time, if ever? Could these laws be invoked to defend migrants, many of whom are religious and—like my own parents—narrate their migratory journeys as acts of faith? Thinking through these questions brought me back to Audre Lorde’s well-known words: “The master’s tools will never dismantle the master’s house. They may allow us to temporarily beat him at his own game, but they will never enable us to bring about genuine change.” We need more than temporary wins and individual successes. We need to dream up more inclusive strategies.

Read this Next: Weaving the Wall

by Barbara Sostaita
Border artists summon the sacred and repair what has been broken.