“The Favourite” Is about the Fear of Losing Control | Bitch Media 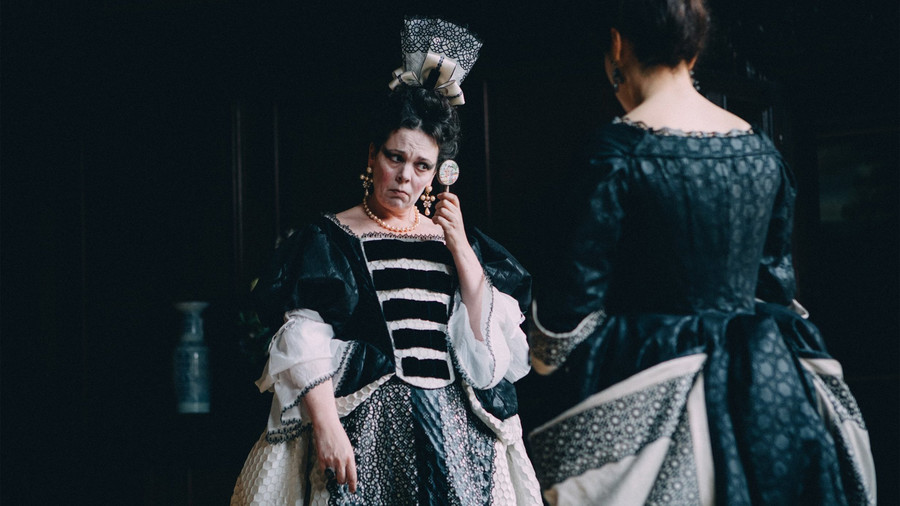 Olivia Coleman as Queen Anne in The Favourite (Fox Searchlight)

As a Black woman, I’m often assumed to have supernatural strength and power. When I fall apart, it surprises my friends and partners: How could this person who is always taking care of everyone fail at taking care of herself? They believe their esteem for me carries over into my spirit, and that I feel as powerful as they think I am. So I feel a sort of relief when I get to watch powerful women fall apart onscreen. The downside, of course, is that in Hollywood films women tend to mainly fall apart because of or on behalf of a man they love. If you look to any year in cinema, you can identify a number of screaming, crying wives—this year, it’s Claire Foy in First Man and Amy Adams in Vice—whose depictions and emotional arcs are tied to complicated, enigmatic men.

Yorgos Lanthimos’s multi-Oscar–nominated film The Favourite is one of the few Hollywood films in recent memory to depict a woman’s multidimensional emotional anguish and struggle for autonomy with a touch so light it might feel like a comedy confection if you aren’t looking closely. The film’s advertising created a sly bait-and-switch with previews that focused on the wicked bons mots of palace intrigue; audiences who walked into theaters expecting light fun instead found a film about control, personified by a toxic love triangle that erodes the British Kingdom and the body of its monarch, Queen Anne (Olivia Colman). The Favourite locates its dark comedy in the indelicate, impossible balance of personal and professional life and the way constant, unrelenting pain can poison both.

Anne’s is a kingdom that has been set off balance. The score, which mainly comprises experimental classical pieces, captures this precarity with notes that sound like they’re sliding off a crooked surface and crashing onto the floor; the liberal use of a fisheye lens captures the sinister-funhouse mayhem within the palace. This is a world where a man will push a woman casually, almost comically, off a hill as a form of intimidation. Another man is constantly accompanied by his favorite racing duck. A courtship in the woods is depicted as a violent shoving match. The madness is comical, but it also represents what happens when order erodes and control is lost.

The film’s depiction of Anne as a bumbling, barking mass of insecurity captures the difficulty of making decisions when everything in your body and mind is working against you. She aches for her dead husband and the many children she lost both before and after their births, but her actions and outbursts reflect a larger fear of losing control over her body and her kingdom. Despite her political stature, she feels like a helpless woman, unable to give balance to the clashing political factions of her government and end the war that’s been bleeding her country’s resources for too long. In her diminished state, she succumbs to simple pleasures; cake, hot chocolate, and other decadent treats become Anne’s primary comforts; she dotes on the 17 rabbits that represent her dead children because they are the only creatures that bring her pure joy.

But an ailing body still needs care and affection, and as a widow well past childbearing age, the time for male suitors is over for Anne. The Favourite winks at history by tweaking Anne’s close female friendships into romantic ones, intensifying the overarching power struggle that drives the film. Each player represents a different approach to control. Anne’s lover, childhood friend, and closest confidante is Lady Sarah Churchill (Rachel Weisz), who asserts her dominance directly and bluntly: One of the first things we see Sarah do is insult Anne’s eye makeup (“You look like a badger”) and insist she return to her room and let Sarah attend an important government meeting in her stead.

Sarah and Anne share real affection—they even have pet names for one another—and with her own husband off at war, Sarah’s control over and manipulation of Anne’s day-to-day life—both practical and sexual—goes largely unnoticed. The only person who does discover Sarah’s intentions is her cousin Abigail Hill (Emma Stone) who uses the knowledge to begin her own controlling, social-climbing game with Anne. Abigail’s approach is indirect: She gets what she wants from Anne by pretending that she doesn’t want anything, and Anne, so used to Sarah’s forthcoming nature, doesn’t realize that Abigail is just as calculating as her cousin.

The Favourite locates its dark comedy in the indelicate, impossible balance of personal and professional life and the way constant, unrelenting pain can poison both.

There is no good option in The Favourite’s love triangle, even when Anne gets wise to her own manipulation at the hands of Sarah and Abigail. She’s too tired, too ill, and much too lonely. As a person who suffers from chronic pain, I understand her choices: When you’re hurting and all you want is relief, you’re often willing to take whatever comes to you. More than anything, Anne seems to want death—but in the meantime, she busies herself with the question of which cousin will win her full affection, finding distraction in disastrous counter-manipulations.

It’s ironic that Anne’s downfall comes when she finally chooses to put aside her pain and regain control of her life via the seemingly docile Abigail, Anne sees a way to get control back. But tragically, Abigail only provides Anne with the illusion that she’s in control, and the bleakness of their dual Pyrrhic victory is captured in the film’s surreal final shot. There we see Anne, finally standing tall, her nose in the air as Abigail rubs her leg subordinately. Rabbits fill the screen, blurring the scene, multiplying over the womens’ miserable faces. In the end, The Favourite is a haunting reminder of the limits of control.