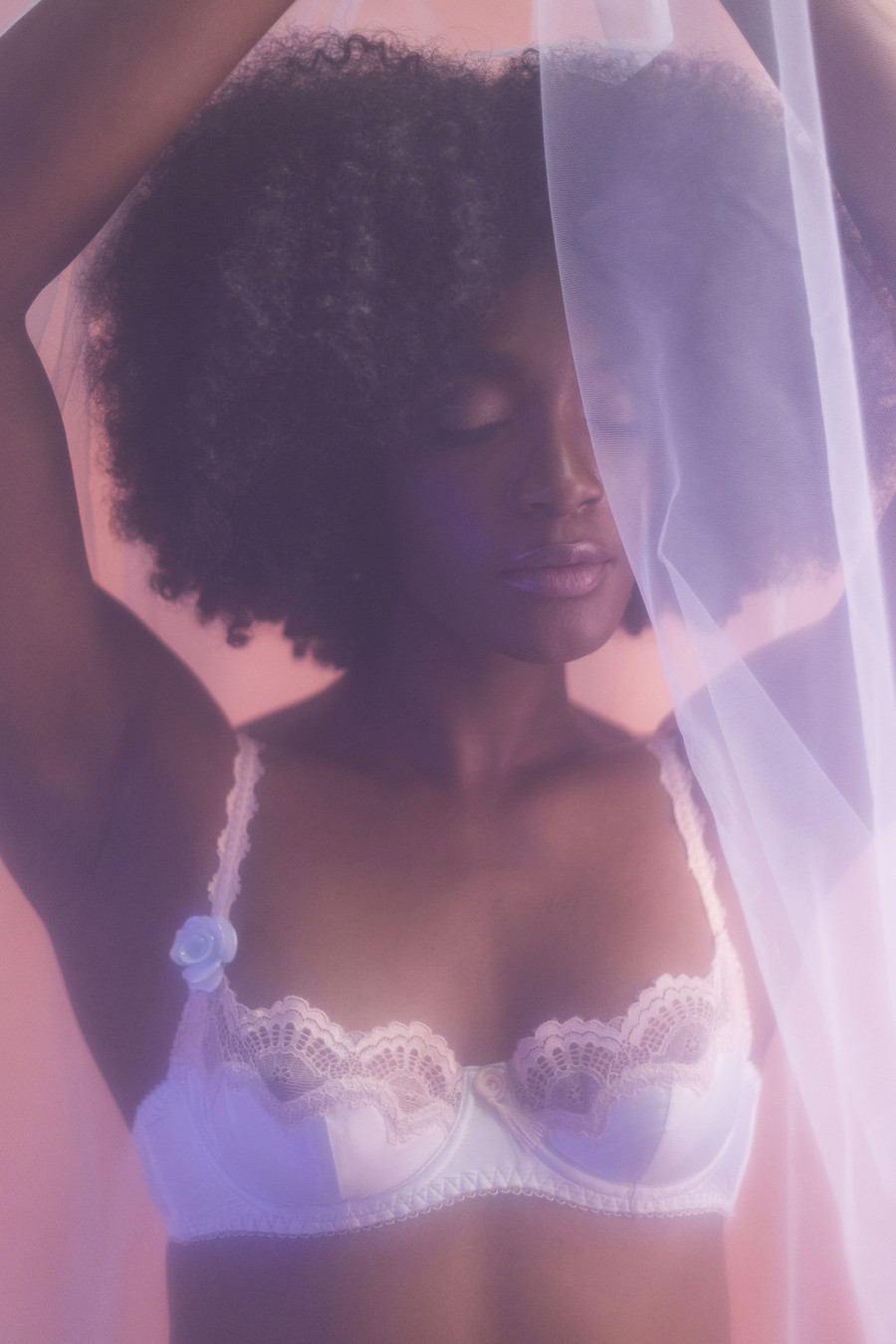 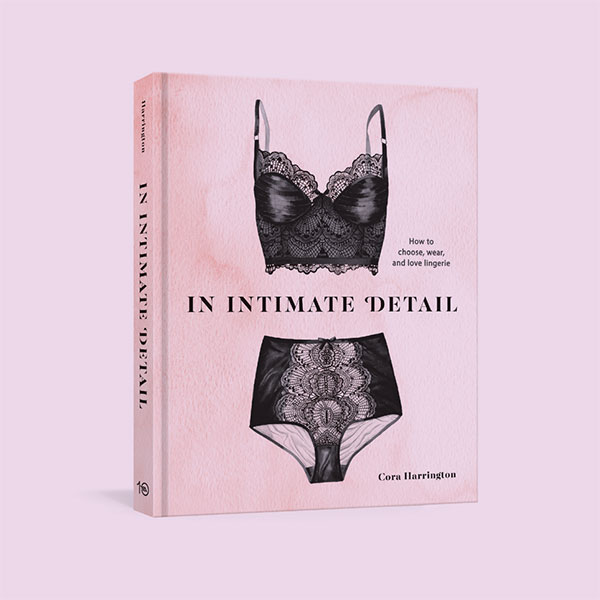 Bra shopping is a normal part of most girls’ lives, but it’s often depicted as an embarrassing and cringeworthy experience. Take, for instance, a 2001 episode of Lizzie McGuire in which the titular character (played by Hilary Duff) and her friend Miranda (Lalaine) run into their male teacher while shopping for bras. Bustle’s “7 Embarrassing Childhood Stories, from Period Mishaps to Training Bra Shopping, That Literally Everyone Can Relate To” includes the reminiscences of one woman whose mom took her bra shopping at a mall immediately after a dance recital because her “leotard was quite see-through and everyone in the audience could see…well…a lot.”

Cora Harrington, founder of the Lingerie Addict, had a less dramatic experience when she hit puberty in the fourth grade. Her parents were practical about her maturing body; they bought her a training bra at a department store. “They didn’t want me to grow up having weird feelings about my body or my breasts or puberty or stretch marks,” says Harrington. “I really give them credit for normalizing that experience in a way that I’m sure has had an effect on me and the way I approach bodies.” Harrington, who grew up in Georgia, majored in sociology and anthropology at Agnes Scott College, a liberal arts women’s college in Atlanta, before working at a domestic violence shelter and staffing their crisis line and later working as a manager for a violent crime victims crisis line.

In these positions, Harrington found common ground with a wide variety of people by “respecting their stories” and “giving them her ear, so they felt like they’d been heard.” She brings that same ethos to the Lingerie Addict, a blog that shows people of all sizes, races, genders, ages, sexualities, and abilities that lingerie is for them. When Harrington became curious about lingerie in 2008, there wasn’t yet a thriving indie lingerie market on Etsy, and Instagram was still in its infancy. She didn’t know where to look for lingerie recommendations, so she decided to create a blog to chronicle her purchases—starting with a pair of $54 peacock high stockings from the German brand Falke. Harrington soon found an audience that trusted her lingerie expertise, and in 2012 she left her full-time job at the rape crisis line to run the Lingerie Addict.

In Harrington’s view, the lingerie industry is “very slow to change” and rarely makes room for anything besides “ideal” body types. “I believe that the personal is the political,” she says. “I believe that the things you do, the things you wear, the advertising you see, the marketing campaigns you see. All of those things say something about our society—the ideals, the goals, the expectations, the rules.” In 2018, the chief marketing officer at Victoria’s Secret, Ed Razek, embodied this resistance to change in an interview with Vogue. “Shouldn’t you have transsexuals in the show? No. No, I don’t think we should,” Razek said. “Well, why not? Because the show is a fantasy. It’s a 42-minute entertainment special.” In the same interview, Razek said that it’s impossible to market plus-size lingerie. “We market to who we sell to, and we don’t market to the whole world. We attempted to do a television special for plus sizes [in 2000]. No one had any interest in it, still don’t.”

But some lingerie experts think that this old-guard model of marketing to a small group of shoppers might soon shift into a newer and more inclusive model. Victoria’s Secret reported an 8 percent drop in brick-and-mortar sales in January 2018, according to CNBC, and Forbes implied that this decline might be related to the outdated nature of Victoria’s Secret’s image. “The legacy of sexy and alluring is not a winning strategy these days,” Walter Loeb wrote in an April 2019 article for Forbes. “With more consumer focus on comfort, athleisure, and conservative looks, management needs to refresh the look and marketing messages.” Harrington doesn’t think Victoria’s Secret’s decline is that simple. “Should [Victoria’s Secret] hire trans or plus-size models? Yes, of course, clearly,” she tweeted on March 1, 2019. “But if that was the sole reason for their decline, most every lingerie brand would be suffering right now, and that’s not the case.” In the same Twitter thread, Harrington added, “Just because a narrative is popular doesn’t mean it’s accurate.”

The ways in which lingerie is conceptualized, produced, marketed, and sold feeds directly into cultural ideas about what female or femme-identifying bodies should look like.

These are the kinds of misconceptions that Harrington is trying to disentangle through the Lingerie Addict and her 2018 book In Intimate Detail: How to Choose, Wear, and Love Lingerie. Harrington acknowledges that glamour has different meanings for different people—and that the decisions companies make can impact who gets access to glamour. “I go to a store to get a new bra in my skin tone and not only do they not have it, they’re trying to sell me a beige bra because it’s a ‘nude’ for everyone when it clearly is not,” says Harrington. “Or if you’re disabled maybe you need a wheelchair, you’re on a cane…and you go to a boutique and it’s not accessible for your disability —there’s literally no way for you to get in the door.” Harrington also uses social media to offer recommendations to folks, like actress Mara Wilson, who asked Harrington on Twitter where she could find “compression socks that aren’t ugly.” Harrington responded by writing a blog post highlighting socks from brands like Insignia by Sigvaris.

Harrington’s In Intimate Detail uses inclusive and gender-neutral language to help readers choose lingerie without feeling the pressure of fashion rules or identity designations. A paragraph on nursing bras, for example, uses the phrase “those who are pregnant” instead of “expectant moms,” and the term “people” instead of “women.” The appendixes and other back-of-the-book materials cover topics like lingerie for transgender individuals, mastectomy/postsurgery needs, and options for people with skin sensitivity. Harrington also explores the difficulties in creating bras for a range of body types—particularly for indie designers who have limited budgets and resources. “(To) serve an adequate range of people, you’re looking at 50 to 60 sizes to start, which is far beyond what most indie designers or new brands are able to afford,” Harrington told CNN in March 2019.

Inclusivity in lingerie seems trendy on the surface, but getting there in real life is much harder; Harrington’s writing highlights this gap so that shoppers might support more independent brands and in doing so realize that their bodies aren’t the problem, but rather that negative and limiting messaging helps “keep people from even getting to that baseline” of finding comfortable lingerie, let alone lingerie that might make them feel sexy. There’s also this toxic load of vitriol aimed at bodies online, a constant barrage of “people that are talking about how awful this person is, how ugly they look, how they should never have worn that,” she says.

Currently, Harrington’s favorite brands include Playful Promises, which recently collaborated with plus-size blogger and designer Gabi Gregg; Elomi, which creates plus-size lingerie that has recently become “a lot more fashion forward” in its design; Nubian Skin, which creates nude hosiery and lingerie that are actually in the right tone range for women of color; and Glamory, which makes plus-size stockings, thigh-highs, and pantyhose, as well as stockings for little people. Hopefully, Harrington’s quest will spark even more companies to create lingerie for varying bodies and skin colors. In the meantime, she’ll be assuring her readers that we don’t need to force our bodies to fit into constricting and restricting fashions—rather, we need companies to make garments that fit our bodies as they are, in all their wonderful variation. “I do think the power of lingerie, and of intimates, is that you can express yourself underneath what you have to wear,” says Harrington. “You can be your most glamorous self…. Even if for some reason you can’t show other people what that looks like.”

Read this Next: Birds of a Feather 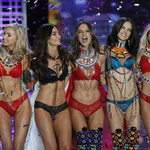 by Mariana Viera
Victoria’s Secret is unquestionably determined to remain the bastion of male-centered fantasy and traditional feminine allure.