Millions of people in the United States and around the world struggle with eating disorders. The National Eating Disorders Association (NEDA) estimates that 20 million women and 10 million men in America will have an eating disorder in their lifetime, and thanks to stigma, many don’t receive proper a diagnosis or treatment until they’re in the throes of a disorder. To combat this, and raise more awareness about eating disorders and body image issues, NEDA organizes National Eating Disorders Awareness Week each year. By sharing the stories of people who’ve had or are still navigating eating disorders, connecting them and their families to resources, and creating shareable social media campaigns, NEDA aims to change the narrative about who eating disorders impact.

Enter Corina Corina, an alt-pop singer and writer who’s preparing to release her third full-length album, Hangover Music. Corina Corina has been recovering from an eating disorder for over 12 years, but often kept her recovery separate from her music—until now. With “Skinny,” a video that Bitch is exclusively premiering, Corina Corina is offering an intimate look at eating-disorder recovery through music in hopes of eradicating the shame and stigma that keeps so many people from getting the help that they need.

“Recording ‘Skinny’ transformed my life,” she said in a statement. “I was able to revisit my darkest days and paint a real depiction of how it feels to be trapped by such a catastrophic disease. That feeling of powerlessness was still deep inside me somewhere and through this song I was able to let it speak.”

Corina Corina spoke with Bitch about why she’s coming forward now, and how others who are dealing with eating disorders can enter the long process of recovery.

You’re the eldest child of two political activists. How did their commitment to making the world a more equitable place influence your music and decision to record “Skinny?”

My parents are old-school Berkeley, California hippies. Between my mother, father, and stepmother, we have all our bases covered: gender equality, LGBTQ rights, immigration, environmental issues, disability rights, racial equality, and so on. All three of them are so smart, passionate, and creative, and because of their strong models, it never even seemed like an option for me to dedicate my time or energy to things that aren’t meaningful or fulfilling. 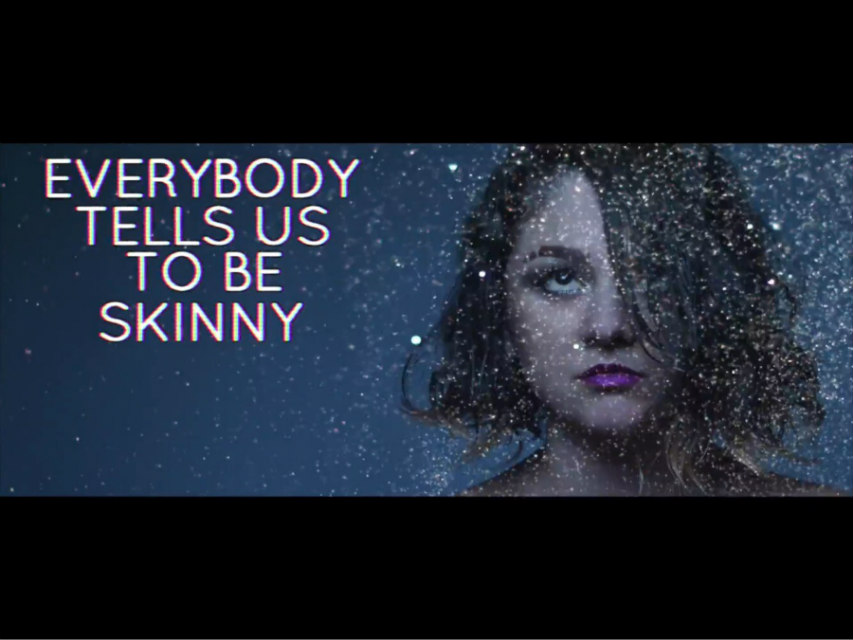 I’ve been arrested for protesting, have donated to causes, volunteered, written to Congress people, etc., but I’ve found that my greatest offering (so far) has been in telling my truth about my experience, particularly with anorexia and depression. I feel very strongly about the deadly pressure placed on women in our culture to meet a certain beauty standard (this is a race and class issue as well.) There’s so much to say about mental health, addiction, and eating disorders. They’re complicated and important issues that aren’t always addressed on a public scale and when they are, it’s not always in the most effective, compassionate way.

You’ve been recovering from anorexia for over a decade. Were you afraid to speak publicly about recovery? If so, how did you overcome the fear?

[I was] absolutely afraid! It took me 12 years to speak about it publicly, though everyone in my inner circle knows. Unfortunately with any addiction (don’t get it twisted, eating disorders fall in the category of addiction), there’s a lot of shame and hiding involved. I spent years dreading that “coming out as anorexic” conversation every time I got to know a new person. Now I don’t have to dread it anymore! It’s been incredibly liberating to be public about my experience. The amount of support and respect I’ve received continues to blow my mind.

You said that you were on the five train in New York when you were inspired to write “Skinny.” Was writing about eating disorder recovery something you’d planned to write about eventually? What sparked you in that moment to open up about the issue?

That actually wasn’t my original intention at all. The song came to me when I was ready. I wrote it because I needed to express and absolve myself of all the shame I had been carrying around for over a decade. It took me a few years to decide what to do with the song once it was recorded, and now just feels like the right time [to release it]. I’m ready to share my offering and I’m really excited by the possibility of my personal story reducing someone else’s shame and suffering.

Eating disorders seem to be a hot topic these days. I think this is a bit of a double-edged sword. On the one hand, awareness is important, but on the other hand, it’s imperative that the right people are leading the conversations. It’s such a misunderstood and individualized disease. As someone who has been through it and shared my recovery with so many others, I feel more qualified to talk about it than most, but even I am limited by my own personal experience.

The goal of National Eating Awareness Week is to “expand the conversation and highlight stories we don’t often hear.” Was expanding the conversation about eating disorders partially the motivation for writing and recording “Skinny?”

It’s definitely been suggested to me many times that I should write a song about my experience but I just felt too close to it for a long time. I’m still easily triggered, and revisiting those dark times is painful. Creating “Skinny” was very much about timing, and I heard what I needed to hear when I was ready.

A few weeks before I wrote the song, I had a 12-hour drinking marathon accompanied by intense conversation with my friend Chuckie Campbell, a hip hop artist and writer who’s been through a lot of heavy shit. When I told him about my recovery, he suggested [that I] write a song about it. I guess at that moment I was finally open to it. Less than two weeks later, I was on the train and the song basically wrote itself; I just got out of the way and let it happen. The hardest part was recording the song. I felt everything—it was intense to say the least! Thank God my producer, Willie Green, is such a safe space for me and has the patience of a saint.

How did you begin the process of recovery? What helped you recover from your eating disorder?

It’s a long, nonlinear process. I’m still very much in recovery to this day. My love for singing is what ultimately gave me strength to fight the good fight. I have something to live for, and I need to be strong and healthy in order to do it. I got to the point where I was so tired of being trapped and living such a small, limited life that i had to surrender. For me, that meant going to an inpatient program, which is basically rehab for people with eating disorders. After staying there for six weeks, I continued my recovery in a 12-step program and called my sponsor every day for seven years. There are many other factors that have gotten me through it but I’d say above all, prayer is the reason I’m still alive.

You’ve said that it’s “bittersweet to celebrate something that I still struggle with every single day.” Does recovery ever get easier? How do you find the strength to keep pushing through recovery?

As I mentioned before, recovery is nonlinear. I have my good days and bad days. Sometimes I’m in awe of how far I’ve come, and sometimes I feel like I haven’t made any progress at all. I called it bittersweet in that moment out of self-judgment more than anything else. On my 12 recovery birthday, I felt very far from where I thought I should be with that many years behind me, and that was a really hard truth to face. My relationship with food and body image continues to be complicated. Every single meal is hard in its own way, and some days I accept that reality more than I do on other days. 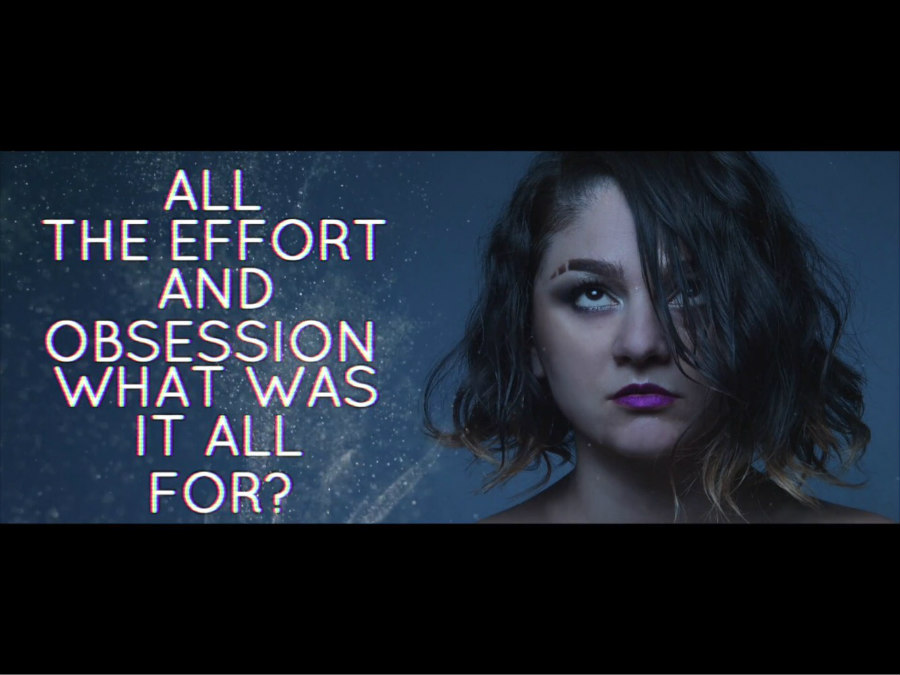 What keeps me strong is my beautiful life and knowing all the parts of it that would suffer if I were to relapse. I know how long, dark, and hard the fall is. When I think about how high the stakes are and how hard it would be to start my recovery all over again after a relapse, the decision to stay abstinent (from food restriction) becomes sort of a no-brainer. [It seems] simple, but [it’s] not easy.

Based on your journey, what would your advice be to others who are in the throes of an eating disorder or recovering from one?

Unfortunately, there isn’t a one-size-fits-all cure. There are as many versions of this disease as there are people suffering from it. With any addiction, it starts with the person really surrendering and being ready to recover. No matter what steps a person takes, if they’re not ready, they won’t recover. Sometimes this just means they haven’t reached their bottom yet—and everyone’s bottom looks different. What I have to offer is what has worked for me: Find something to live for, whether it’s your family, your love for your art, spiritual beliefs, etc. There’s no way to be fully committed to that great love while you’re in your disease. Ultimately what you’re doing is choosing between having a life and living in a very small, powerless world. Then the real work begins.

Aside from that aha moment, here are a few other things that keep me going:

My 12-step program: There’s nothing like having a whole community of people who really get it. It’s been helpful to surround myself with fellows. There are people who have the life that I want so that I have something to keep me motivated. Being of service to those who have less recovery than me is equally important so that I can also have some perspective on how far I’ve come. I see a therapist. I go to yoga every day. I meditate and journal every morning. And I still follow a meal plan—three meals a day no matter what. I haven’t skipped a single meal in almost four years and I’m so grateful for that!

I have a loving community of friends and family who I can be honest with and who I ask for support when I need it. Those people are my damn guardian angels. And if all else fails, pray pray pray. 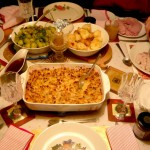 by Reema Zaman
For most of us with disordered eating, holidays with our families can be excruciating.