Cornering the MarketDamali Ayo and the Business of Race 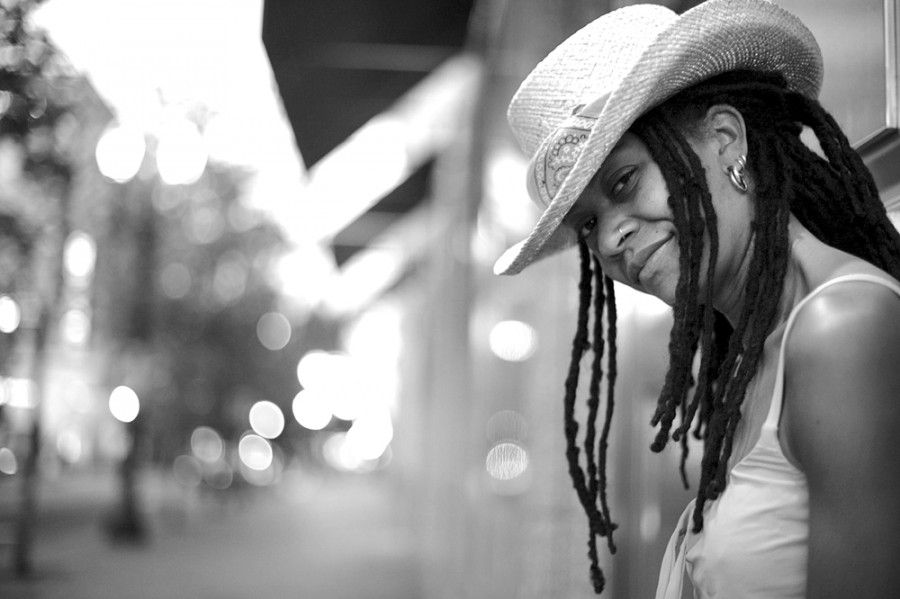 When Damali Ayo was 12, her parents sent her to day camp with 20 white kids. The kids were fascinated by the way Ayo’s hair maintained its texture in the pool. Even after she deliberately dunked her head in the water, they were convinced that black hair doesn’t get wet.

This experience stuck with her as she launched her art career in the predominantly white city of Portland, Oregon. Ayo often felt she was the token black person relied upon for opinions and advice precisely because of her skin color.

“I know you’re going to be interested in this,” people would say whenever an exhibit or play depicting racial issues passed through town. Even when it came to Ayo’s own multimedia artistic creations, she often felt like her audience judged her work as that of a “black artist,” rather than evaluating the artistic merit on its own.

Ayo’s mother recognized her daughter’s dilemma as one that black people have consistently faced in postslavery America. Recalling an old comedy routine by ’70s-era comedian Godfrey Cambridge, she said, “Damali, you can’t be everybody’s rent-a-negro.” Mother and daughter laughed at the allusion, but Ayo recalls that moment as a flash of entrepreneurial inspiration: “I just thought, What happens if I actually do this?”

It was thus that, two years ago, the now 33-year-old Ayo launched the website http://Rent-a-Negro.com, offering “state-of-the-arts” services that provide customers with a “creative, articulate, friendly, attractive, and pleasing African-American person” on a pay-per-service basis. In white-dominated American culture, Ayo suggests, white people, knowingly or not, tend to “rent” black people—to informally yet routinely expect black people to educate them on black culture and to stand as a symbol of diversity. Ayo’s website simply commodifies this service, making it a product like any other.

“When I started [Rent-a-Negro], I thought it was as real as anybody else did. I thought it would be a great way to make a buck,” Ayo says. She wrote up an introduction to the concept of the service, came up with a pricing scheme ($35 to touch her skin, $150 to call her “sista,” $500 to challenge racist family members, and a $10,000 annual package including 12 events, 15 phone calls, 10 appearances, and 3 consultations), set up a payment system through PayPal, and waited for the orders to come in.

Ayo insists that providing casual education on race is no different from any other service out there. “I’m neither suggesting nor inventing renting—this is something that exists. I’m just ascribing a name and fee scale to it, in the spirit of capitalism.”

Ayo believes that the practice of renting is the very real, socially acceptable legacy of slavery. “We continue to look at black people in a service mentality, whether it’s bringing somebody their evening meal or serving up their education on racism,” she says. “And this, as we know, is not the role of black people in our society anymore. I was really interested in the way white people would get offended when I was reluctant to let them touch my hair or explain rap music to them. I realized that they had an expectation of me as a black person to do as they asked.”

Not long after http://Rent-a-Negro.com hit cyberspace, Ayo began receiving applications. “I didn’t anticipate it being such a huge hit, or [inspiring] such an intense reaction,” she says. Some applicants caught on to the satire, while others submitted genuine requests for services they just couldn’t find elsewhere. Appli­cants offered various reasons for seeking to rent Ayo: Simon Gray of Los Angeles, the director of multicultural affairs for his company, needed a black spokeswoman “to help me show the black people at my Com­pany [sic] that I can relate to them”; 65-year-old Gloria Roberts of Aber­deen, South Dakota, wanted to prove to her friends that she loves black people (“They are almost as good as white people,” she explained).

Ayo estimates that about a third of the several thousand rental requests and employment inquiries she received were real. E-mail messages arrived from all over the country asking about franchising oppor­tunities. “After all,” one letter said, “you can’t be everywhere at once, and I’m sure that I’m as serviceable a Negro as any for rental purposes.”

http://Rent-a-Negro.com has served as a successful tool for generating dialogue: “People have told me that they’ve directed white people to the site in lieu of explaining race relations to them,” says Ayo. While fans who understand the satire praise her for illuminating an under-discussed issue, many reactions fall somewhere between confusion (“Is this a joke?”) and outrage (“This is so racist”).

What ultimately kept Ayo from actually going out on rental appointments were the applications inviting her to lynching and gang-rape events. Threats included vulgar ­e-mails from black and white people alike. “The first one did send a shiver down my spine, but after four or five, I got used to it,” she recalls. While there was no way of knowing whether the threats were serious (“How does one gauge a ‘real’ threat? This seems to be a question the whole world is contemplating lately,” she muses), Ayo decided that it wasn’t worth the risk. “I’m not one for spontaneous, unfounded paranoia, but I did decide not to test my hunches. One of these requests came from my area code,” she explains, “and I realized it wasn’t very safe.”

Still, for Ayo, who is a conceptual artist—someone who reframes aspects of society and presents them creatively to the public—http://Rent-a-Negro.com is first and foremost a piece of art. “My medium is ideas, and that means I can use any material to create those ideas,” she says. Her other creations include panhandling for reparations on the streets of New York, Chicago, Portland, and Boston; selling t-shirts with “Hello, my race is…” tags; and various explorations of skin color, femininity, politics, society, and sexuality using everything from paintings to performances to nail clippings, blood, condoms, wax, and dirty underwear. One of her newest art pieces is the recently published book How to Rent a Negro, a satirical, step-by-step instructional guide to renters and rentees, based largely on the website.

“I don’t create fiction, ever,” Ayo states. Indeed, each rental service outlined in How to Rent a Negro—from dancing lessons to a primer on genocide in Africa—is drawn from an actual request from someone at some point in her life. She views the book as a tool for inciting dialogue about what she calls “social junk”—issues that are “felt but not always heard.” And despite, or perhaps because of, its bluntly provocative language and concepts, she anticipates that it will work as a mirror of society. “I believe that all art is a radical form of social activism. In the art world and in our society, we’ve made the grave mistake of separating the two—sometimes, when we look at socially minded art, we think it’s less artistic, when it’s actually the height of art.”

How to Rent a Negro includes first-person accounts of Ayo’s rental experiences, as well as such “tools” as a checklist for the prospective renter (among the criteria: “an unflappable faith in your respect for black people,” “a sense of entitlement,” and “an unwillingness to educate yourself”); a quiz to determine whether you are being rented (“People ask you for your fried chicken recipe”); and guidelines on how to show that the customer is always right. (“You want your renters feeling good about themselves after your interactions with them. You’re not there to further political issues or start the second wave of the civil rights movement. Forget about the debate team awards and learn to smile and nod.”) “The book is way more fleshed out, playful, involved [than the site],” Ayo explains. “It allowed me to tell my experiences in detail and really dive into the nuances of life as a rental.”

At its heart, Ayo considers her book an absurdist text. “It is absurd the way white people continue to treat black people with a service mentality,” she explains. “It is absurd the things I have had to learn about white culture in order to hold a simple conversation in this ‘pluralistic society,’ while white people remain ignorant about people of color. It is absurd that we continue to have a ‘dominant culture’ in the United States. The book, in order to illuminate this, proposes the absurd notion that we pay people for these interactions.”

The book allowed Ayo to dive into the challenge of using satire gracefully and accurately to depict a very real problem. “Satire cannot exist without reality,” she insists, “and only reality can be absurd enough to build solid satire. I find reality to be far more provocative than anything I could ever make up, and this couldn’t be further from the idea of ‘making fun,’ which people often shorthand this book as. They can’t be more wrong.”

Ayo believes that some folks have a problem with her depiction of racism in part because of their unfamiliarity with her art form. She also believes that people who write her off as racist are either unable or unwilling to deal with their own biases. But How to Rent a Negro neither solely intellectualizes nor laughs at the ingrained racism in Amer­i­can society. “Intellectualizing and comedy both create an atmosphere where action becomes an option. This is in between those two extremes—it is at once really funny and really not funny.” Following the modest proposal once made by Jonathan Swift, Ayo believes in the need for startling provocation in order to instigate meaningful change. “We need to throw the pepper in the sauce [in order] for people to start tasting things. When you intersect the radical with the mundane, the socially weighted with the everyday occurrences, that’s when things get really fascinating.”

Find out more about Damali Ayo’s projects at http://damaliayo.com. On most days you can find Lisa Katayama in San Francisco’s Golden Gate Park, at the research desk at Wired, on the basketball court, or dancing on Haight Street.