Immunocompromised Teachers Are on the Frontlines of Coronavirus 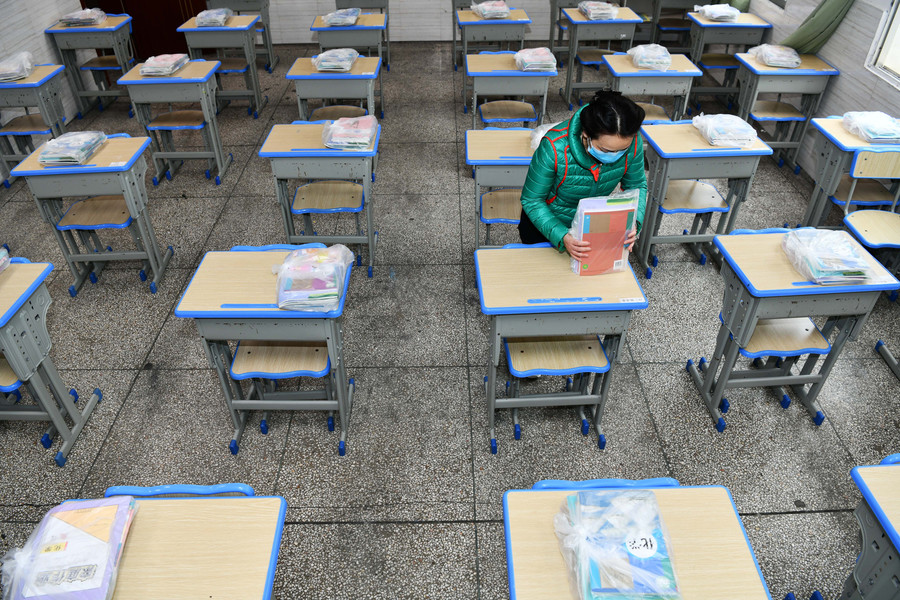 A teacher puts new textbooks on desks in advance for students of grade nine at a school in Yunyan District of Guiyang City, southwest China's Guizhou Province, March 15, 2020. Schools in Guiyang have taken strict measures against the COVID-19 disease, ensuring a safe new semester for students. (Photo credit: Yang Wenbin/Xinhua via Getty Images)

As COVID-19 continues spreading around the world, many people are paying lip service to the idea that precautions, such as social distancing, will prevent the immunocompromised, myself included, from contracting the virus. It’s an idea that has especially taken hold as some colleges and universities enact emergency protocols that will remove faculty, staff, and students from campuses and switch entire schools to distance-learning curriculums. Though colleges and universities across the United States have swiftly acted, closing their doors to students for the remainder of the semester, the damage may already be done.

On March 9, the University of Massachusetts at Amherst, located about 100 miles west of Boston, switched to digital classrooms and advised their students not to return to campus after Spring Break. Harvard followed suit on March 10, after the school’s administrators learned that 77 of the Greater Boston Area’s 95 cases of COVID-19 could all be traced back to a meeting held in late February by the Cambridge-based biotech company Biogen. But I, a disabled, immunocompromised instructor at Emerson College, took Boston’s light rail to the school on March 10 to teach. (Public transportation is my main mode of transportation because my disability prevents me from driving.) At that time, no classes had been canceled and my 8 a.m. freshman research writing course would be the first of my classes meeting after the college’s Spring Break. However, the majority of students had already commingled with other students during Monday class sessions and in their on-campus dormitories.

That morning, I discovered many of my students had spent their breaks visiting European countries. Most—if not all—of my students were under the impression that COVID-19 wasn’t a big enough deal (after all, they said, they knew the outcomes of Severe Acute Respiratory Syndrome, Middle East Respiratory Syndrome, and Swine flu had gone) to cancel their Spring Break plans. If my 8 a.m. class was a microcosm of the student body at-large, then at least 75 percent of the student population traveled over the break and at least 20 percent traveled internationally. Two of my 18 students were sick, and one student left halfway through class because she’d started feeling so poorly.

The students I teach know I am disabled, but until that morning, they weren’t aware that I’m immunocompromised as well. Most traumatic brain injuries don’t result in a suppressed immune system, but my injury was severe enough to disrupt the HPA-axis in my brain, which helps regulate bodily homeostasis. In addition, the large amount of antibiotics I was prescribed during my 2015 hospital stay—when I had a bolt in my skull—led to me contracting Clostridium difficile (C.diff), a highly contagious infection that disrupts the delicate balance maintained by a person’s gut bacteria—another important component of an individual’s immune system.

Though my colleagues and students are aware of my invisible disability, I’ve never given them a play-by-play of my medical history—and I shouldn’t have had to for people to possess a basic understanding of how viruses can affect others. Emerson College’s protocol and the lack of information provided to students inadvertently put me and others like me at risk—even if no students in my class had traveled, other students in their other classes may have passed the virus to them during their Monday classes, in the dining hall, or in their dorms.

Continuing to hold class after a large number of students had traveled both domestically and internationally put the immunocompromised at risk in ways I doubt Emerson College had considered.  To clear up misinformation and show the breadth of COVID-19, I played Last Week Tonight’s well-rounded and balanced March 2 Coronavirus episode for my students. Alongside the episode, I provided the scant information my college had supplied some faculty members via email that morning. Naturally, my students were alarmed when I explained UMass Amherst and Harvard had already implemented remote learning in lieu of in-person class meetings. One student said I was the first of their instructors to bring up COVID-19, though they’d attended Monday classes with other faculty.

But the lack of accurate, in-depth information shared with students and faculty is a problem larger than a single institution and illustrates the lack of a pandemic protocol in place by the government—especially since the president disbanded the National Security Council’s pandemic unit in 2018. Teachers—immunocompromised or not—didn’t have the right information to protect themselves or their students from coming in contact with or spreading COVID-19. For healthy people, this could mean a severe illness, but for the immunosuppressed, it could mean death. According to a 2013 study, 2.7 percent of adults in the United States self-reported being immunosuppressed; and a 2016 study published in Open Forum Infectious Diseases predicted that percentage would continue to rise.

A couple of hours after my 8 a.m. class ended, I and another immunocompromised instructor shared our concerns with Emerson College’s Writing Studies program director. He was understanding and compassionate, assuring us a faculty meeting would be held later that day to discuss next steps and that we could move our courses online if we were concerned about our health. That evening, though, part-time and full-time faculty received an email instructing us to continue holding in-person classes until Emerson’s president, Lee Pelton, released specific instructions. “The question came up about faculty who are concerned for their own health, such as if they are more at risk because of other health reasons,” a note toward the end of the email stated. “If you have that kind of concern, you should contact HR.”

Teachers—immunocompromised or not—didn’t have the right information to protect themselves or their students from coming in contact with or spreading COVID-19.

Affiliated faculty are typically contractors without institution-provided health insurance. Giving immunosuppressed instructors an added task—that could affect their livelihoods—as they manage preexisting health conditions places the burden on instructors instead of the institution that should be looking out for its employees’ well-being. Meanwhile, while human resources is fielding complaints and determining a course of action, those instructors reenter the classroom and risk further exposure. Eventually, Pelton declared that all courses would move to a digital format and thanked us for our versatility and adaptability. I appreciated the message and found it an empathetic and understanding approach to our concerns while assuring us our safety came first. After all, this is an unprecedented, worldwide event—most educational institutions didn’t have a contingency plan. It’s also true misinformation made its way out of the highest office in the United States, causing further chaos and uncertainty.

But still, truer than all of this is the safety of all citizens—regardless if they are living with disabilities, have compromised immune systems, or are able-bodied teens—should be prioritized over a business or institution’s bottom line. We should err on the side of caution instead of inadvertently exacerbating a pandemic by enacting mandatory gatherings of large groups of people, e.g., resuming attendance-required class sessions after a heavily traveled break. But classes were held because most people, like my students, believe people are generally healthy. Or that the old and immunocompromised are disposable. Or that everything about a person can be ascertained by appearance alone. Or that more than 6,000 deaths isn’t too many.

Having empathy and taking other people’s conditions into account doesn’t seem hard, but we’ve proven time and again that it’s difficult to factor in experiences outside of our own. Maybe COVID-19 is the wakeup call we need to prioritize the well-being of everyone—but what price will we pay during this steep learning curve? Most institutions of higher learning have moved classes online, a difficult but ultimately important choice to make to flatten the curve and prevent overwhelming of hospitals. On March 15, Massachusetts governor Charlie Baker made a tough call to shut down all schools across the state, a decision that helps keep immunocompromised teachers safe and takes the burden off of instructors struggling between prioritizing their jobs or their lives. It won’t be easy—and parents will have their hands full—but school closure is in everyone’s best interest—and should’ve happened before I and other immunocompromised teachers were exposed. 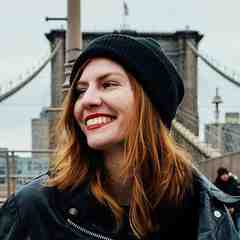 Brooke Knisley is an instructor in Emerson College’s Writing Studies program. She is working on a memoir about trauma and its damage. Find her on Twitter or Instagram. She has balance issues.