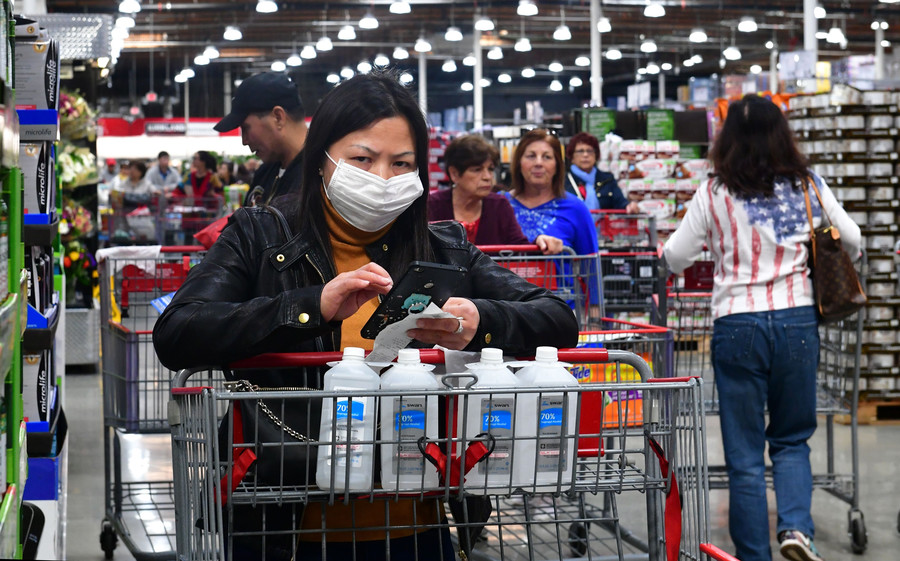 A woman wears a face mask while purchasing bottles of rubbing alcohol at a Costco store in Alhambra, California on February 4, 2020. (Photo credit: Frederic J. Brown/AFP via Getty Images)

When the U.S. news media ramped up its coverage of coronavirus—a deadly virus with an unknown origin that causes respiratory problems—racist comments and jokes about Chinese food increased as well. People across Facebook, Instagram, and Twitter began sharing out-of-context videos of Asian people eating animals that aren’t typically eaten in the West in an effort to link them to the outbreak. One video, which was quickly turned into racist memes, features a Chinese woman named Wang Mengyun eating a bat. Though the video was shot in Palau, an island in Micronesia, and the initial outbreak began in Wuhan, the Daily Mail called the video “revolting” and claimed it was linked in some way to coronavirus. Other prominent publications have also attempted to link coronavirus to Wuhan’s meat markets.

The New York Times fixated on the “unusual fare,” such as hedgehods and snakes, that’s sold. The Guardian, on the other hand, wondered why Chinese people opt to follow familiar food habits instead of shopping at Walmart, providing disparaging descriptions of the markets while describing the Walmart as “sterile and clean.”  And in an article for Foreign Policy, Justin Ling reported on a U.S.-born conspiracy theory that Chinese scientists engineered coronavirus as a form of bioterrorism. Though the theory is obviously false, right-wing politicians and writers are still spreading these racist ideas about Eastern cultures to garner the support and momentum needed to justify discriminatory policies.

Claiming Chinese meat markets are connected to a disease that has resulted in the deaths of more than 600 people has real-life consequences for Asian people in the West: Business owners in Toronto’s Chinatown are experiencing an unusual quietude and loss of profits, and parents who live in Canadian cities with large Chinese populations circulated a petition to ban students who recently traveled to China from attending school. Chinese restaurants in the United Kingdom are reporting 50 percent less reservations and Asian people are being harassed by people who believe they’re carrying the coronavirus. A widely criticized Instagram post from the University of California, Berkeley’s health services office offered a graphic that listed fear and xenophobic behavior toward Asian students as a “common reaction” to coronavirus alongside “anxiety, worry, panic, and feeling helpless.”

Xenophobic ideas about Asian people and the food we consume have been making the rounds on social media as racists capitalize on fear and stress of the unknown to mark Asian people as other, unclean, and dangerous. Edward Said’s 1978 book Orientalism posits that the West imagines the East as dirty, regressive, and dangerous in order to uphold itself as superior in comparison. As Jenny G. Zhang wrote in a recent article for Eater, “…fearmongering and callously using rhetoric that suggests that Chinese people…deserve this outbreak as some kind of payback for ‘barbarian’ customs is, at its core, blatant prejudice.” American cultural hegemony is reflected in the way Americans react to people eating foods they don’t find “socially permissible.”

When many Asians were immigrating to America in the 1800s, the New York Times spread the idea that Chinese people eat ‘strange’ foods, including rats; now, videos of Asian people eating mice have been widely shared with racist comments as part of the current online discussion about coronavirus. “Throughout Asia, the practice of eating dog has been a locus point regarding generational differences, class mobility, and the seriousness of Western scrutiny,” writes Soleil Ho (a former Bitch contributor) in a 2018 article for Taste. “The truth is, those who embrace the practice have always been a minority.” Nineteenth century U.S. Senator James G. Blaine, an early supporter of the 1882 Chinese Exclusion Act, was known to disparage Chinese food.

When then-Philippines Governor General William Howard Taft wanted to introduce the Philippines to Americans in a way that justified U.S. imperialism and colonialism, he added a “Philippines Exposition” to the 1904 St. Louis World’s Fair that featured dog meat being grilled. This distorted display helped Americans justify the “civilizing effect” of America on the Philippines; of course, Taft went on to become U.S. president. Like clockwork, far-right lawmakers in Australia have begun questioning if Chinese immigrants should be temporarily banned from entering the country.

Right-wing politicians and writers are still spreading racist ideas about Eastern cultures to garner the support and momentum needed to justify discriminatory policies.

The Centers for Disease Control and Prevention estimates that foodborne illnesses affect one in six people in the United States and cause 3,000 deaths each year, which is significantly higher than the numbers of people currently affected by coronavirus, but apparently, facts matter very little when perpetuating xenophobia and racism. Only one coronavirus-related death has been recorded outside of China, and yet the West’s relentless pursuit to center itself persists. “The hysterical fear that many in Western countries have is quite insulting to me,” a British-Chinese woman anonymously told the Guardian, in reference to her anxieties over much of her own family being put under quarantine in Wuhan.

Without an ounce of sympathy for the conditions and loss coronavirus has created in Wuhan and for Chinese people, the West has effectively positioned itself as a victim and the East as an aggressor. This, combined with the West’s long-standing and culturally imbued suspicion of the East, has material consequences for Asian people, —especially as distrust is openly sanctioned and encouraged. Even if they come in the form of a seemingly harmless joke or meme about Chinese food, denouncing these racist narratives is imperative. Resisting the racism surrounding coronavirus is not only important in order to lessen the daily harassment that Asians are facing but to hold politicians accountable as they use this rhetoric to advance their own harmful agendas.

Read this Next: The Fried Chicken Dilemma