This is Feminist Country | Bitch Media

This is Feminist CountryAs the CMAs Show, Beyoncé and the Dixie Chicks Herald the Future of Country 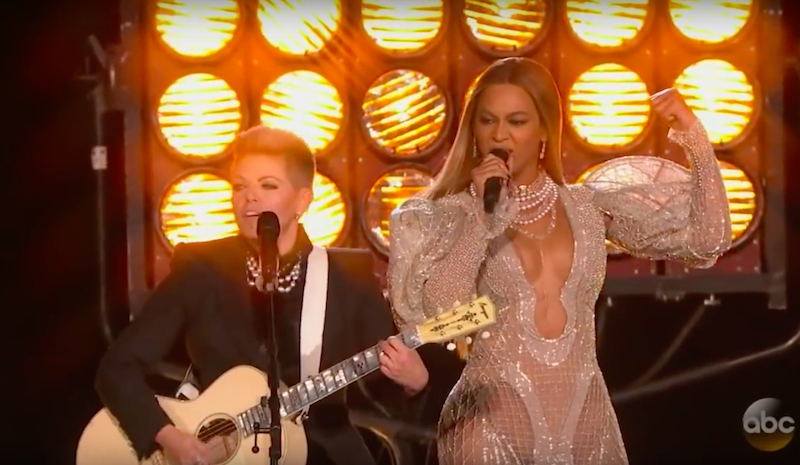 The Country Music Association (CMA) Awards were last week, and the ceremony made for  a particularly newsworthy night in Nashville. It was the 50th annual CMAs, so more than usual, the show walked the line between honoring country music’s past, its present, and, in surprisingly progressive ways, its future. It was also a good three hours of television in which women carried the night. Dolly Parton received the Willie Nelson Lifetime Achievement Award (the first woman to do so), Lady Outlaw Tanya Tucker was wearing a necklace of what looked like sparkly chainmail, and Olivia Newton-John (who used to be a country star!!) looked dapper as hell.

This performance is an English teacher’s dream. Not even Aaron Sorkin could have fit more subtext into six minutes of TV. First, there’s the fact of these two artists being on this stage together at all. Beyoncé is a pop star, not (previously) a country star. And the Dixie Chicks are country stars, but they have been personae non gratae at the CMAs since their 2003 anti-Bush remarks got them blacklisted from the entire industry. Apart from being struck from mainstream country radio, they haven’t won an award at this show since 2002 and went four years without being nominated. And yet there they all were, each staring down an industry that has not been kind to them in different ways. (Most recently and notably, there was the debacle of CMA erasing social media regarding the performance.) The industry blinked first.

Second, there’s the fact that no one could have belonged at the CMAs more. When first Beyoncé and then each member of the Chicks said the word “Texas” in the opening lines of Bey’s “Daddy Lessons,” they were not just singing lyrics, they were staking claim. These are Texas women, all country in their bones. Before the first verse had even started, the absurdity of the industry’s boycott of the Dixie Chicks, and its aversion to claiming Beyoncé as a member of the tribe, had already been highlighted. Who tells a Texan she’s not country? Nobody. The first line of the lyrics may as well have been “Come and take it.”
And then, halfway through the performance, the song switched to the Dixie Chicks’ “Long Time Gone.” This song is on 2002’s Home, the album the group was promoting when the Bush comments were made—the one that was iced out of every award it was nominated for at that year’s CMAs and the last Dixie Chicks song or album the Country Music Association publicly recognized at all. (Subsequent nominations in 2003 and 2007 were for the group, not a specific release.) Lead singer Natalie Maines tweeted that were it not for Beyoncé’s invitation, she would never have interacted with the CMAs again. So two demands were being made of the country music industry at exactly the same time. One, if it wanted to prove it might possibly exist in another 50 years, it would have to accept Beyoncé—and Rhiannon Giddens, and any other performer who dares to highlight the ways in which country music was built on the contributions and traditions of people of color—as artists with more than enough right to be on that stage. And two, if it wanted Beyoncé and the viewers who showed up for her and would never have turned on the CMAs without her, it would have to let the Dixie Chicks back into the clubhouse. It would, in other words, have to make a few more seats at the table. No better night to make those demands than the one where country music celebrates where it comes from and looks hopefully toward where it wants to go.
by Katie Presley
View profile »

Country music can be a hard place for women. Lyrics have women being drowned in rivers, abandoned as whores, or obsessed...