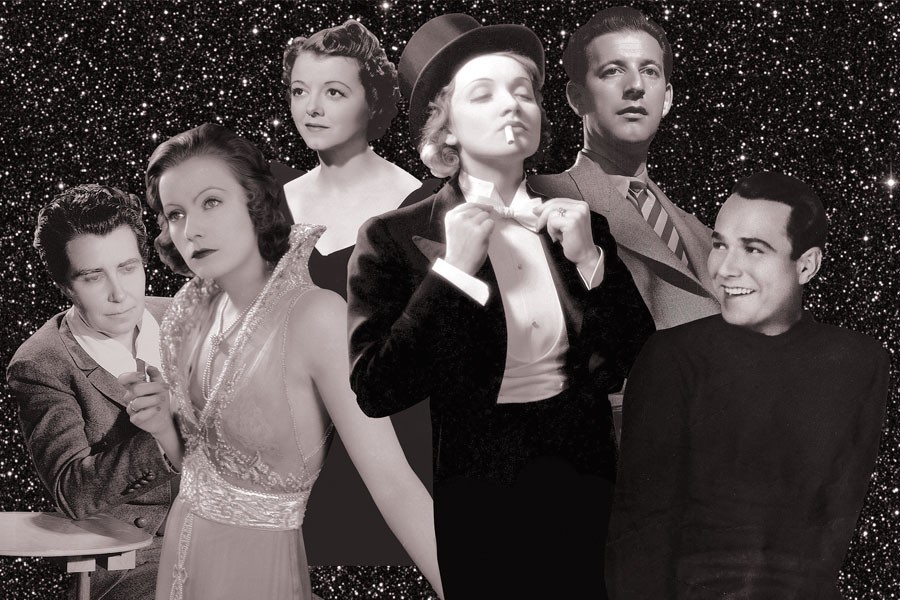 The early years of Hollywood were chock-full of risqué films. Depictions of abortion, drug use, prostitution, sexual desire, and other taboo topics were scattered throughout the silent era and early sound films.

Homosexuality was also frequently projected onto the big screen during those early years, from Marlene Dietrich’s tuxedo-wearing, girl-kissing performance in Morocco (1930) and Joan Blondell helping Barbara Stanwyck undress in Night Nurse (1931) to director Charles Bryant paying homage to Oscar Wilde with an all-gay cast in Salomé (1923). At the time, filmmakers had the freedom to depict certain realities that the industry would eventually deem immoral.

The same can be said of stars offscreen as well. There was a level of discretion within the industry, not to mention a publicity system contrived by studios that covered up any mishaps by paying off reporters or offering up a juicier scandal. These schemes allowed stars to live somewhat authentic lives without their romantic pursuits, queer or otherwise, interfering with their professional ones. Unless their so-called immoral interests directly threatened box-office sales, the industry turned its head.

That is, until 1929, when William H. Hays drafted what would become the Hays Code, or Motion Picture Production Code, a set of moral guidelines by which studios were forced to abide. Content that included, or alluded to, profanity, nudity, white slavery, use of the flag, a woman’s virginity, criminal sympathy, kissing, or homosexuality was either off the table completely or could only be depicted with extreme caution.

Hays wasn’t a new fixture in Hollywood. In January of 1922, Hays, who at the time was chair of the Republican National Committee, was hired as president of the Motion Picture Producers and Distributors of America. Between the rape and murder of actor Virginia Rappe, for which actor Roscoe “Fatty” Arbuckle was acquitted, and the ongoing uproar from religious groups who believed motion pictures were the downfall of American ideals, the industry was forced to acknowledge its faults and needed Hays to help repair them. Working with studios, Hays highlighted problematic scenes that the censorship board would surely disapprove of and, as a result, cost the film its distribution. Hays revamped Hollywood, but it was in 1929, when the stock market crashed—pushing the roaring twenties into the Great Depression—that the industry experienced the full impact of Hays’s influence.

The economic downturn proved to be profitable for Hollywood. Movie theaters filled with people seeking pleasant distractions from their financial predicaments. But the newly invented talkies brought with them yet another wave of moral critique. Religious groups pointed to what they deemed suggestive, and therefore inappropriate, dialogue in films such as Baby Face (1933) and Red-Headed Woman (1932) to validate their arguments. With the public already in distress, these conservative arguments had more impact. Once again, the need for wholesome content became a top priority. This time, Hollywood knew it was going to need more than censorship to hold the public’s interest.

Enter the golden age of Hollywood, an era that would produce some of cinema’s biggest classics while simultaneously controlling the onscreen and offscreen lives of its stars.

It’s not that LGBTQ actors in Hollywood pre-1929 lived out and openly with welcome arms from the public, but what was once a fairly easygoing industry suddenly turned into a strict moral front where the line between personal and professional blurred. During the early decades of film, stars were contracted to studios, and as a result of the Hays Code, their morality clauses intensified. LGBTQ actors were forced to make a choice: give up love or give up acting.

If they chose the latter, these actors were generally presented with a solution to silence any potential rumors. It was popular during these years for studios to create romantic relationships between stars as a way to promote upcoming releases. LGBTQ actors were offered “lavender marriages,” a pairing of one or two actors whose partnership would divert sensationalist gossip when one bad headline could tarnish an actor’s career forever.

Janet Gaynor, the first person to win an Academy Award for Best Actress, entered into a lavender marriage with renowned costume designer Adrian Adolph Greenberg, credited for his work solely as Adrian. Though Gaynor’s sexuality has been speculated about, Adrian was openly gay. That is, until the Hays Code came into play. Adrian’s contributions to costume design are some of the biggest and best, including Dorothy’s red slippers in The Wizard of Oz (1939) and the gowns of Joan Crawford, Joan Fontaine, and Rosalind Russell in The Women (1939). Both movies were released the same year he and Gaynor exchanged vows.

Actor and all-American heartthrob Rock Hudson entered a lavender marriage in 1955, when Confidential gossip columnist Hedda Hopper presented Hudson with an already drafted article outing him. While Hudson’s publicist, Henry Willson, deflected Hopper with a handful of headlines on other stars, Hudson quickly tied the knot with Willson’s secretary, Phyllis Gates. There has been speculation about whether or not Gates was aware of Hudson’s sexuality, but it was no secret in Hollywood.

Not every Hollywood star had to make the tough choice though. Neither Marlene Dietrich nor Greta Garbo, women the studios marketed as exotic European babes, shied away from their bisexuality. Director George Cukor held weekly, men-only pool parties at his Los Angeles home. Actor Patsy Kelly openly identified as a lesbian and linked herself to actor Tallulah Bankhead. Director Dorothy Arzner lived with her partner, choreographer Marion Morgan, for more than 40 years. Despite their frank openness, these stars continued to have lively, award-filled careers. But not everyone who chose to remain open was gifted the same treatment.

Actor William Haines, who starred in movies such as Show People (1928) and Tell It to the Marines (1926), among others, was the top box-office star of 1929 and refused to enter into a lavender marriage. Haines’s homosexuality was widely known in Hollywood. From promoting gay establishments to openly living with partner Jimmie Shields from 1926 onward, to being picked up a reported three times by the vice squad, Haines overwhelmingly refused to live a closeted life. When Metro-Goldwyn-Mayer Studios executive Louis B. Mayer gave Haines an ultimatum—marry budding starlet Joan Crawford or forget about making movies—Haines walked away.

Despite the severity of this era, this wasn’t the first time the industry put its box-office sales at the forefront of its priorities, manipulating the public to ensure success. Film producer Carl Laemmle pioneered this approach when in 1910, he falsely informed the newspaper St. Louis Post-Dispatch that actress Florence Lawrence had been killed in a trolley accident. Immediately following its release, Laemmle revealed that Lawrence was very much alive and, in fact, starring in his upcoming film, The Broken Oath (1910). Nobody knew who Lawrence was at the time. But after the story broke with Laemmle’s proclamation trailing behind, her popularity soared, assuring the upcoming film’s financial success.

Fast-forward to today, and we still see instances of financial gain at the expense of public manipulation. From Taylor Swift’s timely sexual assault trial to Angelina Jolie finally breaking the silence about her divorce from Brad Pitt, it’s no coincidence that these stories happen to grace the front pages right before the release of Swift’s album and Jolie’s film.

The industry, from the beginning, has prioritized itself over the lives of its players. Looking at the list of golden age LGBTQ actors, it’s clear that outside of ticket sales, there wasn’t an established criteria for determining who had to enter into a lavender marriage and who didn’t. Garbo’s and Dietrich’s bisexuality fed into the exotic facade that Hollywood had created and wanted for them. Cukor’s and Arzner’s jobs were behind the camera, which separated them from public scrutiny that focused entirely on its onscreen faces. Thus proving that Hollywood didn’t concern itself with personal matters unless they influenced the industry.

Censorship rules lifted as film entered the 1950s. Between the birth of television and the rise in popularity of foreign films, Hollywood found itself on the losing side of its competition. Once again, studios found themselves at the drawing board, strategizing about how to get back on top. The public was no longer interested in wholesome narratives. They wanted the racy, romantic, and controversial stories that foreign directors such as Ingmar Bergman and Federico Fellini were offering. And it wasn’t just the public who sought the nontraditional; Hollywood filmmakers such as Billy Wilder and Otto Preminger craved this transition as well. With so many finally on the side of open-mindedness, the Hays Code crumbled.

It’s difficult to pinpoint just how many lavender marriages occurred during the golden age of Hollywood, partly because of celebrity discretion, and partly because many LGBTQ actors identified as bisexual. What we do know is that the studio’s level of interference jumped significantly as the industry was pushed into the more conservative 1930s, proving yet again that Hollywood itself was the top priority.

Samantha Ladwig is a writer in Los Angeles. Her writing can be found at Vulture, Broadly, and Huffington Post, and she has been published by Bust and Birth Movies Death. See more of her work at www.samanthaladwig.com. Follow her on Instagram @samantha_ladwig.