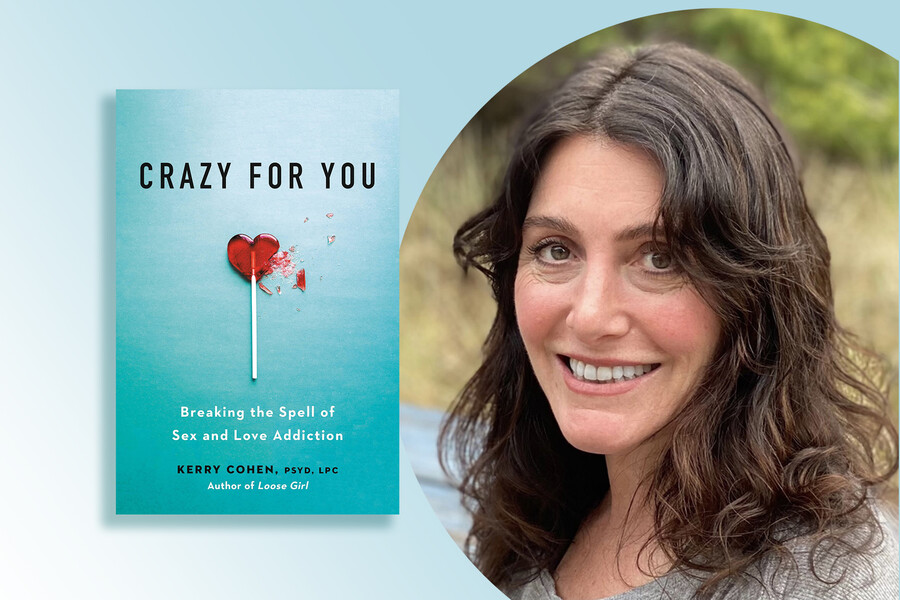 Most of us have at some point thought that we’re doing love wrong. Maybe we feel that we love too much, that our desires consume us whole and spit us out on the other end, ragged and damp, out of control. Or maybe we avoid love, eschew any interdependence in favor of our own independence yet simultaneously feel like the loneliest person in the world. Maybe we treat it like a game, racking up points on apps and tabulating scores in first dates and bases reached, wondering why nothing seems to stick.

But despite the fact that our collective relationship dysfunction is common enough to have spawned entire industries and TikTok trends, pathologization and stigma still abound—particularly when it comes to discussion of sex and love addictions.

Kerry Cohen is no stranger to these addictions, nor to pathologization: The psychologist and licensed therapist chronicled her own fraught relationship with sex and intimacy in her 2008 memoir, Loose Girl. But in her latest book, ​​Crazy for You: Breaking the Spell of Sex and Love Addiction, Cohen takes a different perspective on these issues. Psychiatric history has tended to blame the individual; Cohen, by contrast, focuses on the systemic forces that in many cases lead us to enact—and repeat—fucked-up dynamics in our personal relationships. (And yes, this includes people who don’t consider themselves sex and love addicts). Reframing the way we all think about love and sex, she believes, can change our lives.

Bitch recently caught up with Cohen to talk about the stigma around sex and love addiction, how to stop pathologizing our own behaviors, and how we can all learn new ways to love.

A lot of psychological language uses “they” when referring to pathologized groups. You use “we” instead. So, two questions: Do you include yourself on the spectrum of sex and love addiction? And is your personal experience what led you to think about those addictions in a different way?

Oh god, yes. Yes, I’m quite very solidly on that spectrum and it has—I was going to say it has absolutely ruined my life, but that’s obviously not true because I got my life’s work out of it. It’s ruined my life and it has led me to study and understand these things in ways that I never would have gotten to [otherwise]. In many ways it’s my life’s purpose [to] focus on this subject matter. I could never understand the idea that the world we live inside of isn’t a huge part of how we wind up behaving—and, even more important, feeling. It’s amazing, too, how so much advice and  therapeutic [approaches] actually support these [dynamics] that are hurtful and wrong and really mess with us.

You write about how society pathologizes our emotional responses without acknowledging that society itself has created these responses, and I think that’s particularly the case with addiction—and the way that we all view romance. At the same time, Crazy For You takes a psychological view of this subject, which is notable given how much psychology as a discipline is rooted in a legacy of pathologization. Do you think that can be reformed?

When I was in college, I was interested in psychology, but I learned quite quickly that I was mostly just interested in humans. I’ve always had a bit of a bias against my own field—I was just constantly raising my hand to challenge everything because I just don’t see how there’s any separation between who we are and [the culture] we live inside of. I’m also aware that unless we actually transform [that] culture, we’re all kind of screwed. Because you can still wind up believing things about yourself, or [about] other people, that you know intellectually [are] not true.

Sex addiction has historically been a diagnosis, but Crazy For You proposes that it’s more a symptom of existing in a culture of love that encourages us to fit into structures like heteronormativity, monogamy, gender roles, etc. These structures shape our lives—often in literally and metaphorically violent ways—whether we want them to or not. What do you hope people who don’t consider themselves addicts get out of the book?

What I hope they can get out of it is this thing that we were just talking about. This stuff has plagued my life. I have studied the shit out of it and I was able to really find ways to look at it and come to know things about it that I wouldn’t have otherwise. I would love everybody to get to that relationship to sex and love, where it can be more honest and less riddled with [the] these expectations that have been put on all of us. And maybe, you know, I suppose that would be how the culture around it would change a little more.

I do think for a lot of people, it feels a little bit hopeless. You can do all this work on your own relationship dynamics, you can unlearn deep-seated societal beliefs, but there’s no guarantee that others will do the same. Can a culture change if enough people are individually reflective?

If you’d asked me pre-BLM, pre-#MeToo movement, I would have said no. I was just utterly pessimistic about that, because I feel like we’ve tried. We’ve tried for so long, and it felt like nothing ever budged. But now, because of the beauty of that, of those things really coming into our cultural consciousness, I feel like it’s possible that that is the case. Because that consciousness begins in our heads.

One of the misconceptions about therapy is that you’re going to get rid of parts of yourself, that something’s going to get fixed. That’s not at all how humans work, of course. Therapy really has to be about self-awareness, so that you’re conscious of what [your] feelings are really about. It [also] has to be about getting more comfortable with discomfort, [something] our society does nothing to help us with. That’s why we’re addicts—we can’t tolerate our own pain.

[Therapy is also about] learning how to stop the suffering, as opposed to the pain. The  wound-based feelings of “I’m not good enough” [are] why we suffer. For instance, if someone rejects us, the rejection itself [might] actually make perfect sense and [have] nothing to do with whether you’re lovable or not as a person. But you turn it into, “That’s because I’m so unlovable,” and there’s your suffering. Therapy has to be about the behavior that comes from not having been self-aware, [from] just being sort of flung around by our wounds.

And yes, plenty of those wounds are culturally based. I don’t say this in the book, because I didn’t dare, but let’s face it: Capitalism, at its core, needs us to not feel good enough. That’s where we’re just fucked. So all we can do is build that self-awareness and live a more honestly engaged life.

It’s funny you say you didn’t dare include in the book that capitalism has us fucked — because that’s totally what I was reading in your words.

I love that the subtext is just constantly there. This is certainly a part of who I am as a therapist, and it’s who I am in the world. Probably the main thing I’ve wanted my kids to learn about is critical thinking about the culture we live inside of, you know, [the understanding] to not just accept it. If we don’t get honest, and build self-awareness and also cultural awareness, we don’t even have a chance.

For women specifically, unhealthy cultural beliefs and expectations can lead to a certain kind of emotional attittude to sex as a thing that defines self-worth, which seems like a kind of addiction in itself.

When Loose Girl first came out in 2008, it was misinterpreted by a lot of feminists as me suggesting that, you know, girls should keep it in their pants—which is never, ever something that I think. [But] the whole world, in terms of sex, is about heterosexual male desire and [about] what men want. So, for any teenage girl, there’s no clarity of anything that’s going to grow organically inside as coming from her. It’s always going to be [defined] by the male lens—what it expects, what it [says] as sexy. The easiest example of this [is] the whole Madonna/whore thing. That’s something that’s really easy to look at and [reject]—like, Okay, I don’t believe in that, that’s bullshit. I’m going to go ahead and have sex however I want to have it. But you still [feel] the social repercussions of that. [It] doesn’t matter [whether] you believe it; it’s not about what makes sense or what’s real [or] what you deserve as a human.

Even when these “traditional” understandings of romantic love and relationships are clearly failing us, I think it can still be hard to get people to question them. You just get the least amount of pushback for going along with structures of heterosexuality and monogamy, and are rewarded socially and financially for building relationships that follow this format—the nuclear family, marriage… Even in a time where historically “nontraditional” relationships and families are increasingly visible, it can still be hard to push back. How do you get people to question these deeply held assumptions that are clearly hurting them?

In my specialty as a therapist, it’s kind of a no-brainer—because that has been making them suffer for so long. When we’re told that this is what it looks like when you’re in a healthy relationship, or this is what it looks like when you have finally dealt with your intimacy issues and now you’re having good intimacy in your relationship, when we’re told that it looks one way only—and then people like me, like most of my clients, like…actually most people, when you can’t do it again and again, and you fuck it up and you fail at it. And you also secretly don’t even know that you don’t even necessarily want that…it’s too confining, and it makes you suffer, and it makes you feel like, “I’m never going to be able to have love. I’m never gonna have this thing I want more than anything in the world.”

I think that’s what helps people come to a place of being willing to get really critical about that, because it feels like permission. I see that with a lot of my clients, where they just feel relieved. They’ve been thinking they want this one thing for so long [that] they hadn’t even considered that there are options.