Imperial FantasiesOn the Costs of Misrepresentation

Crazy Rich Asians has attached itself to various claims about its importance. The film is just a film and therefore we shouldn’t read too deeply into it because it’s unjust to hold it up to more stringent standards of criticism than white productions. The film is a movement and a pioneer in Asian American representation, therefore we should all go see it and ensure it’s a box-office hit. The film is about Asian America, or rather about the differences between Asia and Asian America (and Asians who grew up in Asia should shut up despite the fact that the film is set in Asia).

A few weeks before the movie premiered, Wu wrote a heartfelt statement about some of the criticism. “I know [Crazy Rich Asians] won’t represent every Asian American,” she wrote. “So for those who won’t feel seen, I hope there is a story you can find that does represent you.” It mirrored the responses from many Asian Americans who were aware of problematic elements in the movie, but were still drawn to it because of its groundbreaking casting of Asian actors in central roles that, as journalist Julia Carrie Wong wrote in The Guardian, weren’t in “martial arts, surgery, tech support, or massage therapy.”

However, few of the film’s detractors, if any, seriously believe that Crazy Rich Asians should bear the representational burden of portraying all Asian Americans, let alone all Asians. Rather, much of the criticism is triggered by the film’s misrepresentation of ethnic minorities in Singapore. Just as non-white minorities were airbrushed from the whitewashed New York City portrayed in Lena Dunham’s Girls, non-Chinese ethnic minorities are invisible in a Singapore characterized as a hyper-wealthy Chinese diaspora. Perhaps the racial homogeneity of high net worth individuals in Singapore is as logical as the idea that spoiled rich white girls in New York would only have white, rich friends.

After all, there are brown faces in Crazy Rich Asians. Only, like Donald Glover’s ill-advised advent as Hannah Horvath’s (Lena Dunham) Black Republican love interest, they’re Potemkin characters who appear for the sole purpose of fulfilling racist stereotypes. In the dream world of Crazy Rich Asians, brown people are only present when they’re opening car doors, hiding all evidence of their boss’s luxurious shopping sprees, and guarding the mansions of old-money Chinese Singaporean families. Nick’s family’s estate runs over acres in land-scarce Singapore, and is so fiercely guarded that the address doesn’t exist on Google Maps.

As Rachel and Peik Lin (Awkwafina) proceed down a long driveway, they’re stopped by South Asian guards, who are introduced in a typical jump scare. The presentation of brown men as scary predators is played for laughs, their otherness supplemented by the bayonets they’re carrying. Singapore is presented as a cosmopolitan city-state of skyscrapers and delicious food. Cue money shots of hackneyed landmarks that wouldn’t be out of place in a Singapore Tourism Board advertisement: Gardens by the Bay, Marina Bay Sands, and other buildings erected in the past decade. For those familiar with Singapore, the ultra-modern city-state narrative emphasizes rapid economic development after independence from the British and a short-lived merger with Malaysia and erases pre-colonial and Indigenous history. 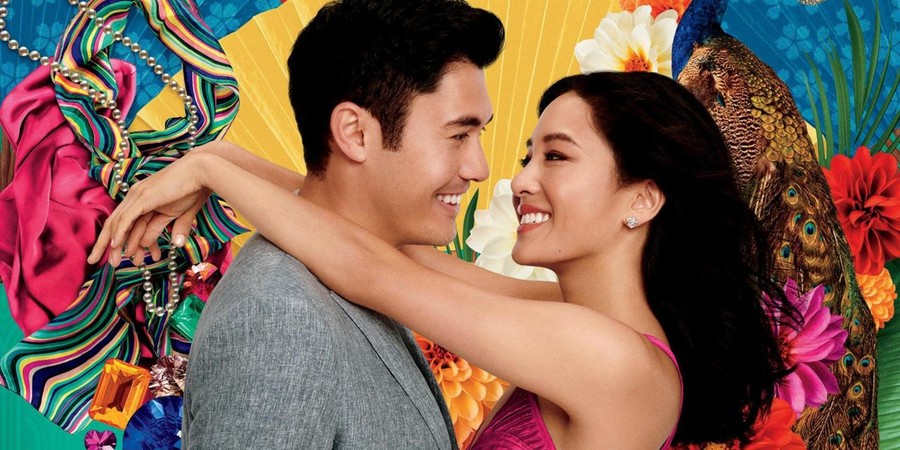 It’s explicitly mentioned when Peik Lin, Rachel’s Singaporean college roommate, tells her: “The Youngs were rich when they left China for Singapore, when it was all pig farms and jungles.” Despite historical evidence that Singapore has been at different times part of—and centers of importance to—various empires, including the Majapahit, the ruling government, which has been in power since the 1960s, has promoted this narrative of Singapore as terra nullus prior to either the arrival of the colonial British or the People’s Action Party’s coming to power in the post-independence era. The pig farm/jungle–pig narrative conveniently erases urban Malay and Indigenous people and negates the racist, colonialist dynamic that continues to permeate both government and society to the point that the Chinese majority are hyper-privileged and ethnic minorities are systematically oppressed.

For instance, Nick’s grandmother, the matriarch of the Young family, speaks Mandarin Chinese with a cut-glass Mainland accent, but no English, and lives in an opulent Straits Chinese mansion. To say that this combination of cultural markers from distinct Chinese (and Chinese diasporic) cultures would never exist within the same family risks the same homogenizing that the film’s been accused of. Yet, given the general approach to representing Chineseness, it’s more likely that the filmmakers went for a portrayal of Chineseness conveniently similar to the diasporic experiences of Chinese Americans than a culturally specific portrayal of Chinese culture in Singapore. (What comes to mind is Zadie Smith’s consideration of the aesthetic choices made in Memoirs of a Geisha, a film with many of the same Orientalist and colonialist resonances that Crazy Rich Asians possesses.)

It isn’t just Singapore that gets exoticised. In a small subplot, Nick’s best friends Colin (Chris Pang) and Araminta (Sonoya Mizuno) book a small island in Nusantara for their stag and hen parties. Nusantara is a Javanese term for the Southeast Asian archipelago, but the title card suggests that Nusantara is a single island. Nusantara, then, is presented as a blank, unspoiled paradise where our wealthy, make-believe Chinese Singaporeans enjoy massages from blank-faced brown women. The whole setup is a perfect if unintentional metafictional commentary on colonialism. Maybe this is nothing more than a misunderstanding of the narrative scarcity encountered by Asians in America.

Just as non-white minorities were airbrushed from the whitewashed New York City portrayed in Lena Dunham’s Girls, non-Chinese ethnic minorities are invisible in a Singapore characterized as a hyper-wealthy Chinese diaspora.

As someone who grew up permeated in narrative plenitude—for those who share my skin color—representation, for me, does not entail the mere presence of characters or actors of a certain color. Representation implies some measure of selection—of the terms on which we describe, portray, and otherwise inscribe imagined lives. Representing people and places ethically and truthfully entails a more thorough thinking through of meanings and assumptions, and Crazy Rich Asians represents people and places with so little thought that it upholds a painful, brutal hegemony that’s painfully apparent to people who live in Southeast Asia, where the film is actually set.

To lack representation is to lack the autonomy of selection and to some extent self-definition. But representation never takes place on a tabula rasa. It’s not just that Asian Americans have been unrepresented for so long, but that they’ve been misrepresented in racist caricatures for much of Hollywood’s history, that makes Crazy Rich Asians seem like such a triumph. But doesn’t this go for a society with a fraught, violent, colonialist history that has been suppressed, only to be presented on the silver screen as an imperialist playground for the fantasies of Americans? Doesn’t the same go for Asians who aren’t Americans, but are still relegated to the status of outsider in their own country?

Wonder Woman and the Double Binds of the First Female President

“365 Days” is another Abuse Story Painted as Romance