GoFundMe and the Transgender Politics of Desire | Bitch Media

Tender Judging Care #TransCrowdFund and the Politics of Desire 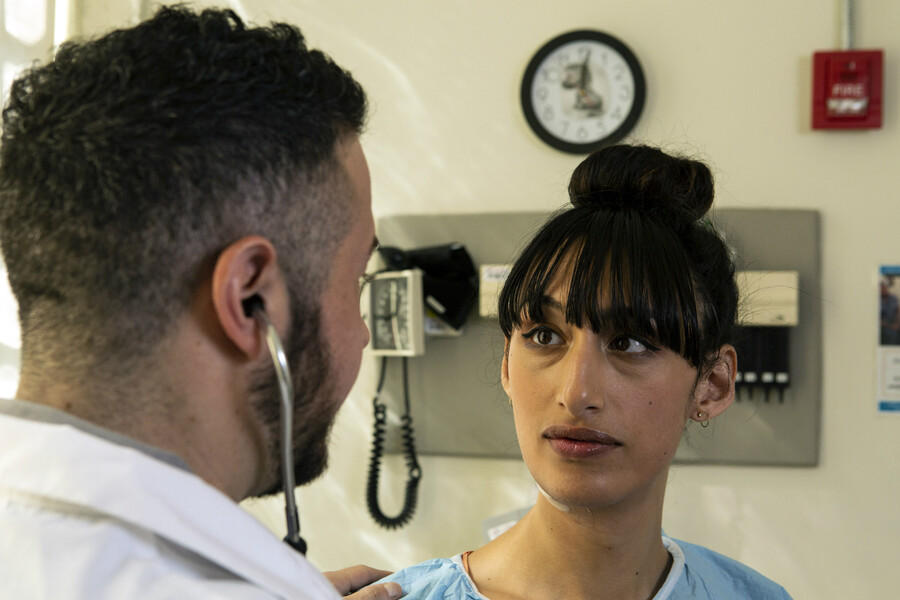 A transgender woman in a hospital gown being treated by a doctor, a transgender man (Photo credit: The Gender Spectrum Collection)

GoFundMe is perhaps the epitome of the late-stage capitalist solution to a fundamental healthcare problem—a solution patched with rosy stock photos of beautiful people, a cutesy Band-Aid on a gaping wound that’s suffered worst by those who are already existing at the intersection of multiple oppressions. Operating at the crossroads of social media and money, it represents salvation for the small percentage of its users who meet their goals—but offers a dangerous pitfall by linking survival to social capital. The online desire economy, long used to sell social norms, takes on a new more literal deadly tinge when it comes to funding things that directly impact people’s physical health and ability to survive—like healthcare. The mid-2010s rise of the #TransCrowdFund prompts the question: Does one have to create a normative transition narrative in order to be considered deserving of care?

Even before the GoFundMe boom, there was an element of desirability politics in healthcare. Transition-related healthcare, including hormone-replacement therapy and surgeries (all of which have been deemed life-saving by the American Psychology Association and other medical associations) have historically been classified as “cosmetic” by insurance plans; ironically, these treatments and surgeries are often ones that render trans people more “passable”—that is, more in line with conventional gender presentation and beauty standards—in order to simply survive.) The crowdfunding boom, led by sites like GoFundMe and YouCaring (which was absorbed by GoFundMe in 2018), has been taking off since the early 2010s, and has attracted trans people looking for support in funding transition-related healthcare either because they’re uninsured or because their insurance will not cover the care they seek.

Chris Barcelos, PhD, an assistant professor of women’s, gender, and sexuality studies at the University of Massachusetts, Boston, is studying the political implications of these narratives, using GoFundMe as a jumping-off point. “I started this research project because, like anyone in trans communities, I kept seeing these campaigns come through social media, and having a simultaneous reaction of, ‘Wow, it’s awful that we can’t get basic healthcare,’ and also noticing that there were a whole lot of differences and inequalities in who was crowdfunding, and the kind of stories that they used, and how successful they were,” they say. “[A]s a social scientist, I was like, all right, I’m going to collect some data.”

Barcelos notes that GoFundMe makes it conspicuously difficult to collect data on campaigns en masse, but they nevertheless scraped the site to make a dataset. The finding? “In the three years of campaigns that I had [data for], it was predominantly white, trans men raising money for top surgery.” Barcelos also recorded discrepancies in fundraising rates between trans men and trans women, and noticed relatively few out nonbinary people running campaigns. Perhaps most important, Barcelos concluded that, on average, campaigns raised only 25 percent of their fundraising goals. Of course, there are stories of success. Take Jordan, who used GoFundMe to cover transition-related healthcare procedures. Jordan, who had an existing online presence and had previously used crowdfunding for creative projects, pointed out that she was used to sharing pieces of herself for an online audience: “I’m pretty much the most open book possible.” But she also acknowledged that, for a successful campaign, being forthcoming “is really the only way you can be when you’re doing something like this. I told my story, I added pictures of myself, I have documented my journey on social media…. I’m open about my transgender identity, my lesbian identity, and even my past as a former alcoholic. If anyone looking at my campaign DMs [to ask] about me, I’m gonna be brutally honest.” But what about people who can’t be brutally honest, who either can’t open up to their communities or would simply rather not? Does the crowdfunding model put the onus on people who are already vulnerable to discrimination in medical settings to be even more vulnerable in order to fund essential healthcare?

Barcelos has released three studies on the common narratives around trans crowdfunding topic over the last several years. “It’s based on a stock transgender story of like, always knowing I was [blank], and then I came out, and then I faced this, and now I’m going to realize my true self.” That narrative, Barcelos notes, “feeds into certain ideas about what being trans is, which are often really medicalized.” Trans people have long understood that getting their needs met by both individual doctors and the medical profession at large requires their stories to fit the often startlingly limited cisgender understanding of what makes a “good” trans person, something that Barcelos points out as a systemic problem: “[There’s] the idea that being trans is X or Y or Z, [which] means that the system of medical providers gets to determine who is really trans or not. And that’s really dangerous.”

As a hub for both queer community and commerce, the internet has been both a blessing and a curse for queer people. While online queer spaces can be a lifeline for many young or newly-out people unable to find in-person community (and for all of us when in-person community is simply not viable), its image-based currency leads to what is at best superficiality and at worst a newer, queerer beauty standard—one that’s indistinguishable from already-dominant Eurocentric beauty standards that we’ve already been indoctrinated in. This image trap is one that queer people easily succumb to. We do so because we often desire acceptance so badly we’re willing to conform to the standards we can achieve in order to make up for the ones we can’t. We also do so because in many cases our survival depends on the ability to conform; and because we often believe ourselves immune to heteronormativity—and, by extension, immune to assuming the position of oppressor particularly if we are non-Black. But just as queer people are not immune to heteronormativity, we are also not immune to beauty standards or the messed-up politics of desire in which our identities take shape.

But as violent as normalizing forces can be, the internet is also a source of support from strangers who often understand your needs and struggles better than those you see every day in person. Barcelos, the UMass Boston professor, identified a trend of trans people stating in their GoFundMes that any extra funds raised would be redistributed to the transition funds of others; indeed, multiple people I spoke with mentioned that they did so. Greyson, who was encouraged by his friends to set up his GoFundMe campaign, reported receiving support from friends involved in socialist organizations: “It meant a lot to me to have their support, and it reminded me that when people organize to get something done, you can do it.” The general sense of engaged community around #TransCrowdFund is not unlike the principle of mutual aid, a longstanding practice of radical community care that during the past year of pandemic life has garnered increased attention. Barcelos’s current research, in fact, delves into the more recent phenomenon of direct cash transfers as a method of trans mutual aid, with people publicizing their Venmos or Cash Apps and soliciting donations on social media platforms. Jordan’s experience with GoFundMe, she says, “brought me closer to several people I was already close with, connected me with strangers I am grateful for, and made me appreciate my life just a little more.” Crowdfunding for healthcare, for anyone, shouldn’t have to exist, but the phenomenon of these campaigns illustrate the beauty of community that can emerge from something so broken.

The politics of who is considered deserving of care, however, is a contentious landscape for trans people that has very real political implications. In the first two months of 2021 alone, lawmakers in at least 12 U.S. states have introduced legislation that attempts to criminalize transition-related healthcare for minors—and in some cases, for trans people under 21. The United Kingdom’s rise in trans crowdfunding efforts can be linked to a similar right-wing push, and the recent anti-trans Bell v. Tavistock (the United Kingdom’s equivalent legislation for restricting trans kids’ access to gender-affirming medical care), along with extremely long waits at gender clinics, have made it increasingly hard for trans people to get healthcare. In the face of these increased legislative attacks, it’s not surprising that solutions increasingly come from the venture-capital sector. Services with Instagram-friendly marketing and catchy single-word names like Plume and FOLX bring the paid subscription model to transition-related healthcare. This burgeoning service model has benefits: It incorporates telehealth; offers pricing that, for those without insurance, is more affordable than out-of-pocket medical treatment; and mitigates the risk of violence trans people often experience at the hands of the state or the medical-industrial complex. But, like much of what venture-backed platforms innovate, the model has predictable drawbacks: Their price points present a new barrier to accessibility, and, like the desire politics that governs crowdfunds, reinforce power hierarchies.

Trans people have long understood that getting their medical needs met requires their stories to fit the often startlingly limited cisgender understanding of what makes a “good” trans person.

Services like these are the natural extension of a neoliberal economy that has realized, as it once did with same-sex marriage, that trans people have grown “acceptable” enough in the eyes of the mainstream to become a viable new market. These services provide highly individualized and often expensive solutions to problems that could have much cheaper/community-based and funded solutions were it not for the U.S. hellscape of privatized healthcare and ever-scarcer social safety nets. One could argue that this is the real transgender tipping point: not the point at which we’re appearing in mainstream culture, but the point at which we’re considered a market ourselves. And despite the community solidarity that can emerge from crowdfunding, it’s not a solution to the problem that is healthcare in the United States either. One trans crowdfunder, Rebecca, ran a successful campaign but maintains “It’s ridiculous that anyone in the United States needs to fundraise to pay for medical treatment.”

This sentiment was recently echoed by GoFundMe itself, whose CEO, Tim Cadogan, penned an opinion piece for USA Today urging Congress to pass a new COVID-19 aid package. “Our platform was never meant to be a source of support for basic needs, and it can never be a replacement for robust federal COVID-19 relief that is generous and targeted to help the millions of Americans who are struggling,” Cadogan wrote. Ultimately, the quest for healthcare as a trans person is fraught no matter which path one takes, but it’s one that many of us choose to embark on because, as harrowing as the systems can be, transition can also be a source of such joy and fulfillment. “You should never feel ashamed for having to crowdfund, but it should put the fire in you to fight for something better,” Greyson says. “I don’t want anyone else to have to beg for money online to pay their medical bills because they can’t afford something that should be guaranteed as a basic standard of living.”

Read this Next: Bravado and Branding 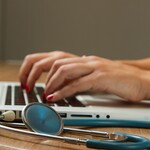 by Niko Stratis
We can’t rely on the economy of influencers to solve a healthcare disparity.