History shouldn’t be treated as static information—biographical zines offer a way to tell stories of the many marginalized figures who are overlooked textbooks. As a genre, biographical zines may not be as well known, but they're definitely worth digging up. Coming from indepdendent producers, these biographies celebrate both unknown historical figures and the spirit of independent publishing. From pilot Bessie Coleman to a Japanese anarchist, here are some of my favorite biographical zines.

The Life and Times of Butch Dykes 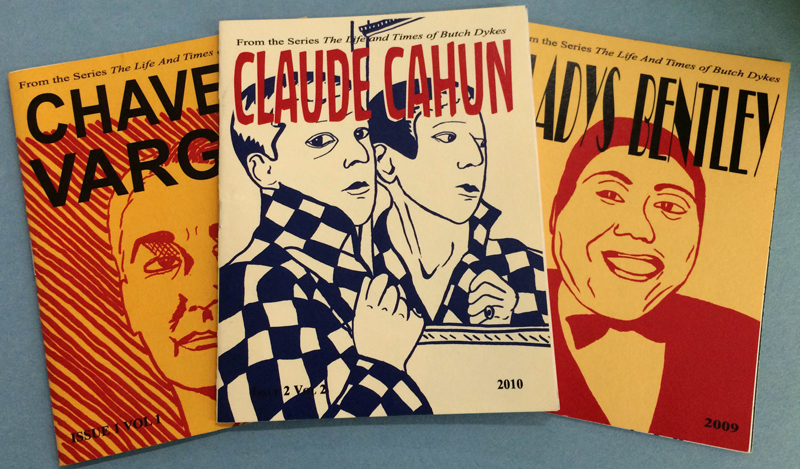 Eloisa Aquino’s series about women and gender nonconforming LGBTQ folks in The Life and Times of Butch Dykes is one of the most well-known biographical zine series.  Aquino, who has a background in journalism, crafted well-researched and complex stories of overlooked queer women from history. In 2009, the series began with Chavela Vargas, who was, as Aquino wrote, “the first public woman in Mexico to wear pants. First to declare not to like men.” Each issue features hand-written prose accompanied by high-contrast, two-tone illustrations of key moments in the subjects’ lives.

Aquino’s artistic biographies are basically fanzines celebrating amazing women, including singer and performer Gladys Bentley, photographer and activist Claude Cahun, supermodel Jenny Shimizu, and poet Audre Lorde. One thing all of the subjects have in common is they are pioneers, either redefining the role of women in their professions, breaking through gender and sexual restrictions in their countries or cultures, or working to pave the way for people who were not accepted by the mainstream.

The Life and Times of Butch Dykes is available at banddpress.etsy.com

Siue Moffat’s Fascinating Folks (which she created with an anonymous artist) is an in-depth collection of biographies of women and people of color. At 53 pages, the thick single-issue zine tells the stories of a Japanese female anarchist who fought for Korean independence in the early 1900s, a mysterious woman who is either French royalty switched at birth or a complete hoax, an African-American comic artist who created a Black superhero and erotic lesbian and gay comics in the 1950s, a Brazilian man who escaped slavery to become a martial artist and drag performer, and a reporter who was the only female soldier to serve in WWI.

Moffat and her co-creator began researching these folks out of sheer curiosity and realized that they should put their research into a zine. “We wanted people to know about these obscure people and a zine with text and illustrations was the perfect format,” says Moffat.

More information about Fascinating Folks is available by emailing pumpkinpiepress@yahoo.com.

In the first issue of her zine, Mocha Chocolata Momma, Marya Errin Jones writes that she is tired of the “crappy depictions of Black women in most forms of popular culture.” She decided to create this series to highlight the stories of Black women that inspire her. The title Mocha Chocolata Momma comes from a cheeky awareness of the absurdity (and aggravation) of Black women so often being described in terms of food items. The first issue profiles Bessie Coleman, the first African American woman to get an international pilot's license. Jones highlights not only the achievements of her subjects, but also their significance to culture and to her own life. Overlapping text on top of line drawings and photographs of Bessie Coleman, the zine jumps around in time to tell the full story of its subject, which is equal parts Coleman and Jones.

Jones says that while working on the first zine in her series she found that historical events are not clearly linear. “As Doctor Who describes time, it's more like a big ball of ‘wibbly wobbly timey wimey … stuff.’ To get a more complete picture, it's important to consider the cul de sacs and dead ends that also make up a life, and the historical records of our lives.”

Other figures in the series include Zoe Washburne, a fictional character created by Joss Whedon for the TV series Firefly, and Salaria Kea, the only American Black woman to serve during the Spanish Civil War. 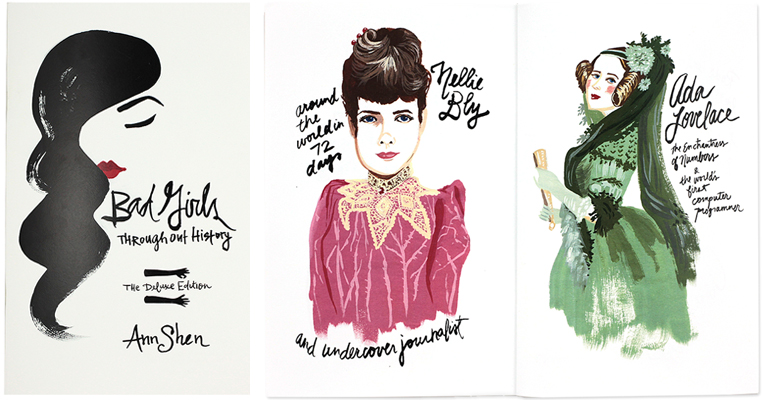 Like the zine writers above, Ann Shen created Bad Girls Throughout History because she wanted to shed light on women who inspired her, but who few people knew about. In art school, Shen was given an assignment to make something that could be reproduced in multiples and she decided to make a zine about badass women. Each page features a colorful brush painting of the women who are highlighted, from mathematician Ada Lovelace in a flowing green dress to a closeup of Carmen Miranda’s iconic Brazilian headdress.

“In art school, and in life, you’re constantly challenged to be something that might be someone else’s idea of what’s right and good,” says Shen, reflecting on the creation of her zine. “I started to realize that the truly remarkable people in life often stepped outside the bounds of what was expected of them—and I wanted to celebrate that with this zine.”

The deluxe issue of her zine is a series of illustrations of 37 women. Subjects include a combination of lesser-known figures and famous women such as Empress Wu Zetian, Nellie Bly, Tallulah Bankhead, Anna May Wong, and Dolly Parton. Her zine is so popular that in fall 2016, Chronicle Books will publish a book-length version that will include paintings of 100 women and write-ups about each.

Bad Girls Throughout History is available at shopannshen.etsy.com 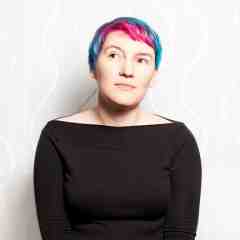 Lindsay Gibb is a journalist, editor and librarian. She was editor of Broken Pencil (a Canadian magazine about zines) for eight years and currently catalogues zines at the Ontario College of Art and Design University in Toronto. Her new book National Treasure: Nicolas Cage is available through ECW Press and most book retailers.

Relevant: Cut & Paste: Zines About Mental Health and Self Care

by Elizabeth King
Stressed? Anxious? Depressed? Here are some smart, creative, feminist zines about taking care of yourself.