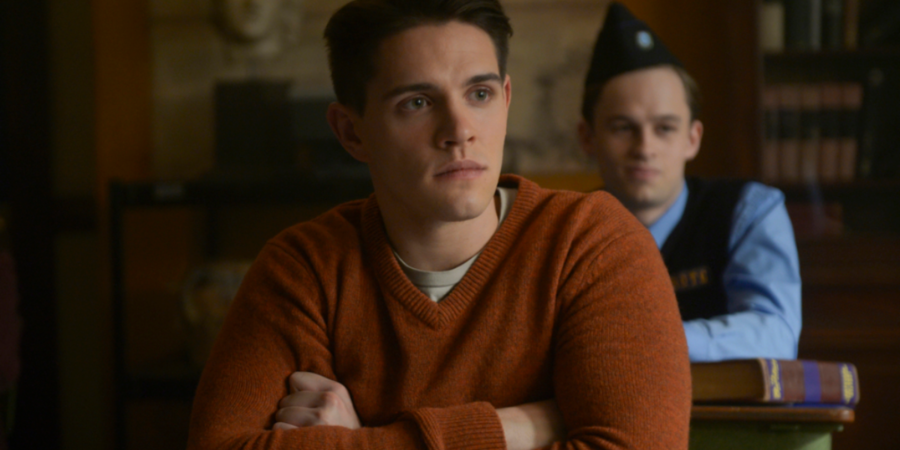 I was a little surprised (and, to be honest, excited) when I got a Bumble notification highlighting a contest to win a date with Riverdale star K.J. Apa. It seemed like harmless publicity: One lucky fan would spend the day volunteering with Archie Andrews. But I started to question the media partnership when so-called feminist dating app Bumble began popping up in the CW adaption of the Archie comic book series. Unlike the majority of their real-life peers, Archie (K.J. Apa) and friends (all played by 20-somethings) rarely deal with the adolescent struggles of body changes and romantic discovery. Riverdale’s steamy intimate moments feel just as unrealistic as the show’s convoluted plots.

The only teen who is depicted fumbling through dating is Kevin Keller (Casey Cott), Betty’s (Lili Reinhart) best friend and the first-ever gay character in the Archie universe. As Jackson McHenry wrote in Vulture, Kevin is unable to find connection “amid Riverdale’s heteronormative embrace of high-school love triangles, dances, and occasional S&M fugue states.” But when he turns to cruising, the concern his friends express for his well-being—a serial killer with fundamentalist Christian values is terrorizing the town, after all—comes across like scolding. Riverdale’s straight teens date without fear, with the result that, as Kevin reminds Betty, “You act like we’ve got the same set of opportunities [for romance], but we don’t.”

Tellingly, a season later, it’s Kevin who finds the most success using Bumble with the help of fellow queer character Cheryl Blossom (Madelaine Petsch), who harbors her own queer trauma after being sent to a convent for conversion therapy. The introduction of a dating app was an important, all-too-rare moment of solidarity in a show where queer characters are granted few freedoms to express themselves. Bringing Bumble to Riverdale offered Kevin access to the dating options already available to his heterosexual peers. But it didn’t address the underlying homophobia in the town of Riverdale that constrains the diversity of queer narratives the show can tell. While Kevin and Cheryl are examples of the continued struggles for LGBTQ acceptance at home and in society at large, their identities exist at the cost of, at the least, social isolation and at the worst, threats to their lives.

Further, the fact that Kevin is being used to sell the Bumble app undermines his own agency. While it’s a sign that the app is seeking to diversify its users, it’s an extremely obvious ad that makes viewers wonder if the episode was crafted with Bumble in mind, versus the app fitting into pre-existing storylines, and when a product placement becomes a plot point, the line between advertising and fiction blurs. With these sort of media partnerships becoming more entrenched and harder for audiences to discern, this raises relevant concerns around how love—both onscreen and in the real world—is being shaped by technology.

Riverdale is far from the first attempt to insert online dating into dramatic plots. TV shows ranging from futuristic sci-fi like Black Mirror to reality show Dating Around explore internet dating culture. This media trend is clearly a response to the rapid rise in dating apps. In addition to broadening dating pools, specialized apps from Grindr to Eshq provide outlets for traditionally marginalized communities to find connection. But this technology also raises serious questions about data security and potential negative psychological impacts, particularly for self-esteem and mental health. Now that the possibility of an IRL “meet-cute” seems less probable than a virtual match, TV shows are grappling with the implications of what romance means when soul mates could only be a few taps away.

Such questions are at the center of the new French Netflix series Osmosis, which dives into the darkest potential of algorithm-calculated relationships. Osmosis, which premiered in March, is about a new dating process of the same name that relies on an implanted brain chip to determine someone’s true match. A business whose purpose involves mining an individual’s thoughts and desires is a more extreme manifestation of current data-mining practices, but also one that seems like a likely eventual outcome of them. But Osmosis quickly deviates from this theme, focusing instead on the dynamic between the two sibling geniuses behind the technology. And the show’s disconnected narratives about the  volunteer product testers relies on outdated ideas around who deserves love.

Among those willing to try out the experimental procedure are Ana (Luana Silva), who is overweight; Lucas (Stephane Pitti), who is gay; and Niels (Manoel Dupont), who has a sex addiction. Their identities are portrayed as barriers to a socially acceptable vision of romance. While dating apps have in many ways become normalized, certain users, especially marginalized ones, still face an additional stigma and subsequent struggle to find love online. Ana is paired with a fitness trainer who she thinks is out of her league, a conflict that goes on to define their relationship. Lucas leaves his loving partner for a supposed life match who ends up being a textbook stereotype of a predatory gay man. Niels, who previously spent all his time watching porn, is so overtaken by his own sexual desire that he physically harms his newly connected soul mate. While apps, and the websites that preceded them, have changed the game for those who have struggled with dating, Osmosis doesn’t have sympathy for these characters. Instead, Osmosis portrays physical appearance, sexual identity, and mental-health status as far greater barriers than navigating a relationship that has been determined by a computer.

By contrast, the Black Mirror episode “Hang the DJ” proposed a different idea: that finding love sometimes means breaking the code. In the much-lauded 2017 episode, Amy (Georgina Campbell) and Frank (Joe Cole) are matched through the System, a Big Brother–like dating program enforced by armed guards and portable Amazon Alexa-type devices called Coaches. But the System also gives each relationship a built-in expiration date, and despite Amy and Frank’s genuine connection, theirs is short, and the algorithm goes on to pair them with increasingly incompatible partners. In order to be together, they have to fight back. And upon escaping their universe, they learn they’re only one of many simulations determining the real Frank and Amy’s compatibility.

What’s eerie about “Hang the DJ” is that the fictional app’s technology doesn’t seem far-fetched in a time of increasingly personalized digital experiences. App users are free to swipe left or right, but they’re still confined by the application’s own parameters, content rules and limitations, and algorithms. Bumble, for instance, puts heterosexual women in control of the process of communication; the app was created to give women a chance to explore prospective dates without getting bombarded with continual messages (and dick pics). But women still have little control over the profiles they see and any eventual harassment they might deal with. This mental exhaustion could lead to the sort of fatalistic complacency we see in “Hang the DJ.” As Lizzie Plaugic writes in the Verge, “It’s not hard to imagine a new Tinder feature that suggests your likelihood of dating a person based on your message exchange rate, or one that suggests restaurants in your area that would be perfect for a first date, based on past data about matched users. Dating apps now require very little actual commitment from users, which can be exhausting. Why not quarantine everyone looking for marriage into one place until they find it?”

Even reality television, long successful for promoting (if not always delivering) heavily engineered happily-ever-afters, is tackling the complexity of dating in 2019. The new Netflix show Dating Around sets a single New Yorker up with five potential partners. The twist is all five rendezvous are identical, with each love-seeker wearing the same outfit and meeting all five dates at the same restaurant. At the end, they choose one of the contenders for a second date. While this experiment-level of consistency means the “dater” can make an unbiased decision, Dating Around also removes the traditional stakes of reality TV.

Now that the possibility of an IRL “meet-cute” seems less probable than a virtual match, TV shows are grappling with the implications of what romance means when soul mates could only be a few taps away.

The contestants don’t actively compete with each other, and the viewer never sees the deliberation that goes into the second-date pick. What’s most surprising, in fact, is how banal Dating Around is. As Laurel Oyler wrote of the show in the New York Times, “Though dating apps may improve many aspects of modern romance—by making people safer and more accessible—their guardrails also seem to limit the possibilities for it. The stakeslessness of Dating Around might be a refreshing lack of pressure, but it might also reflect the disturbing effects of the same phenomenon in real life.”

The show’s most memorable episode featured 37-year-old Gurki Basra, who decided not to go on a second date at all after dealing with a racist attack from one of her matches about her first marriage. In an interview with Vulture, Basra said her motivation to go on Dating Around wasn’t to find true love but to help other women. She said, “When I was 15, 20, 25, when I got married even, I never saw the brown girl get divorced who was not [treated as] tragic. Everyone was always like, ‘Aww, she got divorced.’ It sounds cheesy, but I was thinking, if there’s one girl out there going through my situation and I inspire her to not go through with the marriage, I’ll basically undo everything that I went through, and maybe I’ll make a difference.” Basra defying the premise of a stylized depiction of modern dating is radical and relatable for anyone who has put themselves out there for the dating world to judge.

In Riverdale, dating apps may serve as uncritical product placement, but reflect a reality that they are sometimes the only safe option for those who are not white, straight, or male. Kevin first turns to Grind’Em (the show’s version of Grindr that existed pre-Bumble partnership), but is frustrated because “no one is who they say they are online.” As he goes searching for sexual liberation in the woods, his on-and-off again partner Moose (Cody Kearsley) is shot while hooking up with a woman. Even while closeted, these characters are in danger. But as the show moves forward, there’s hope for its gay protagonists: As of Season 3, Kevin and Moose are finally together. While they are forced to meet in secret and hide their relationship, it’s progress without the help of technology. TV and movies have long dealt with how romance is found, deepened, and sometimes lost. More often than not, love like Kevin and Moose’s faces challenges that make it stronger, and its recipients more dedicated to protect it. But in a time when dating apps make companionship seem easier to find than ever, modern love stories must grapple with the barriers that continue to pull us apart.

Read this Next
by Hannah Steinkopf-Frank
View profile »

Popaganda: A Guide to Trump Resistance

BitchWatch: 15 Bitch Approved TV Shows You Should Watch This Winter