Ana Martinez was speaking to her 16-year-old adopted son in his room at her home in Portland, Oregon, last month when he flew into a rage over his phone calls being monitored by his parents. He punched a hole in a wall just inches from her face, picked up a metal chair, and then hurled it at her. Fortunately, she didn’t sustain any injuries, and her two younger children weren’t present. Though Martinez called the police, they only issued her son a warning and left without arresting him. Martinez—who’s hard of hearing and uses American Sign Language and English to communicate—was surprised by her hearing son’s violent behavior. He had been living with her, her hearing husband, Pedro, and their other children for nine months. While she knew that he was capable of being emotionally abusive and destroying property in fits of anger, this was the first time “he came at us,” Martinez wrote in an email.

Cases of domestic violence have spiked worldwide under the mandatory lockdowns meant to curb the spread of COVID-19. These mandates have trapped survivors in their homes with their abusers, isolating them from people who can help and worsening already dire situations. Domestic violence is committed against family members, whether it be a spouse, partner, parent, child, or the elderly, and it can take a number of forms, including physical, sexual, verbal, emotional, and financial abuse. Domestic disputes often escalate into homicides; according to a 2015 FBI report, 42 percent of homicide victims had some sort of relationship with their perpetrator.

Before the spread of coronavirus, one in four American women experienced domestic violence, and on average, more than three women were murdered by their intimate partners daily. State agencies and advocacy groups are concerned that these numbers will continue to climb in the coming months, since resources available for domestic violence survivors are being depleted and there’s growing financial insecurity. In April 2020, the United Nations warned that six months of quarantine could lead to 31 million additional cases of domestic violence globally—but the outlook for deaf women is especially dire. According to a representative from the National Deaf Domestic Violence Hotline—which serves deaf and hard of hearing victims of domestic violence and is reachable by email, live chat, or video—reports of abuse have increased by more than 200 percent since April.

Shelters across the United States have been inundated with new domestic violence cases, but many of them aren’t equipped with the resources to meet the needs of deaf, deafblind, or other survivors with disabilities. While deaf and hard of hearing people experience the same forms of violence that hearing people do, they are 1.5 times more likely than hearing people to experience domestic violence in their lifetime. Estimates also show that deaf and disabled women are frequently victims of sexual violence: 83 percent of women with disabilities are sexually assaulted at some point in their lives. Sexual violence is typically perpetrated by a person the victim knows—eight out of 10 rapes are committed by a known person, and 33 percent of rapes are committed by a spouse or partner.

Martinez is among the approximately 48 million deaf or hard of hearing people in the United States at risk of domestic violence during the lockdown, yet several systemic barriers are preventing survivors like her from accessing necessary resources during the pandemic. Because abusers are now always at home and able to monitor conversations, it’s become more challenging for survivors to reach out to domestic violence agencies and hotlines for support. But even if survivors could safely reach out, many of these agencies and hotlines can’t support them, since these organizations often lack qualified sign language interpreters and other accessible means of communication. (ASL, which is derived from early 19th-century French Sign Language, is grammatically different from English, so for those whose primary language is ASL, using English to communicate isn’t an option.)

What’s worse, some domestic violence organizations make communication demands that ignore the realities of many deaf people’s lives, said Najma Johnson, the executive director of DAWN, a domestic violence agency based in Washington, D.C. that serves deaf and hard of hearing survivors, including those with other disabilities. Some require deaf survivors to reach out to them using teletypewriters (TTY), an antiquated telephone device invented in the 1960s, though many prefer to use IP Relay, a service that allows users to make and receive calls through text over the internet, or Video Relay Services (VRS), which allow for communication through a remote sign language interpreter over smartphones and computers. “DAWN usually has to step in and explain why [VRS are] the better choice…and break down confidentiality laws to ease discomfort about using third-party communication,” Johnson said.

While there are some state-level organizations like DAWN that specifically serve deaf and hard of hearing people, there are “not enough deaf [domestic violence] organizations nationwide, so the survivors are not getting [the] local support they need,” Megan Erasmus, supervisor of the National Deaf Domestic Violence Hotline, told Bitch. The lack of accessible information about the coronavirus in ASL is compounding the domestic violence crisis for deaf survivors. “Information deprivation increases risks [of] isolation and abuse,” Erasmus said. Isolation was an ongoing issue before the coronavirus, and now, “[deaf] survivors are more isolated than ever, increasing their risk for abuse.”

Many deaf women are also in precarious financial situations, which affect their ability to escape. “Leaving an abusive partner often involves secretly saving money,” Lore Ameloot, the director of development at the Abused Deaf Women’s Advocacy Services in Seattle, an agency that serves deaf survivors of domestic violence, and where the National Deaf Domestic Violence Hotline is housed, told Bitch. Deaf women are less likely to have the financial resources they need to leave because they face higher rates of unemployment than both deaf and hearing men. As we enter one of the worst economic downturns since the Great Depression, Ameloot noted that “This will be more difficult if survivors have lost their jobs.” According to a 2019 report by the National Deaf Center, only 53.3 percent of working-age deaf people are employed, compared to 75.8 percent of hearing people—an employment gap of 22.5 percent. Among those, 61.1 percent of deaf men are in the workforce, while only 50.5 percent of deaf women are employed. Unemployment rates increase with each additional intersection of marginalized identities, including race or additional disabilities.

Al Mascarenas, a resource advocate at DOVE, another domestic violence agency that serves deaf and hard of hearing survivors in Colorado, said that some abusers have been withholding COVID-19 stimulus checks, “forcing survivors to return home or to meet their partners in person to receive the check that belongs to them.” Domestic violence is costly. According to the Justice Department’s Office on Violence Against Women, domestic violence costs the United States more than $5.8 billion in healthcare costs annually, the majority of which goes toward medical care and mental health services. Collectively, survivors lose 8 million days of paid work and 5.6 million days of household productivity to domestic violence each year. Given that deaf people tend to experience greater healthcare inequities than hearing people, it is safe to assume that the financial cost of being a deaf survivor would likely be much higher than it would be for a hearing survivor.

Shelters across the United States have been inundated with new domestic violence cases, but many of them aren’t equipped with the resources to meet the needs of deaf, deafblind, or other survivors with disabilities.

Law enforcement and the criminal legal system also frequently fail deaf women who are survivors of abuse. On the most basic level, it’s harder for deaf women to report abuse to the police because there are fewer communication options for them. Howard Rosenblum, the chief executive officer at the National Association of the Deaf (NAD), said in an email interview that his organization hopes to change this. He’s encouraging all municipalities to implement text-to-911 systems, which are only available in 19 percent of the country, “even though the data shows that more and more people (not just deaf and hard of hearing people) are using text-to-911 during the pandemic.”

Some courts are also holding remote hearings during the pandemic, which may not be accessible for deaf survivors. Even before the pandemic, though, the NAD reported cases where courts didn’t make hearings accessible to this population. One in eight people over the age of 12 are deaf or hard of hearing. In order to safeguard deaf survivors from harm during the pandemic, government agencies, domestic violence hotlines, agencies, and courts must familiarize themselves with the needs and realities of this demographic and establish inclusive programs and services that ensure compliance with the Americans with Disabilities Act. If they don’t, they risk further endangering millions of deaf and hard of hearing women like Martinez, who need help at a time when interlocking crises are destabilizing families and compromising public safety.

Editor’s Note: The name of a domestic violence survivor has been changed in this article to protect their identity.

Read this Next: Bending Reality 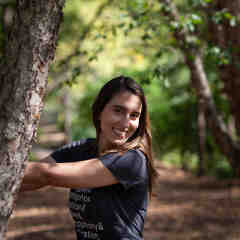 Sarah Katz writes about disability. Her work has appeared in Business Insider, The Guardian, The New York Times, Slate, and elsewhere.