The Death of “My Favorite Murder” | Bitch Media

White Women Need to Do BetterThe Death of “My Favorite Murder” 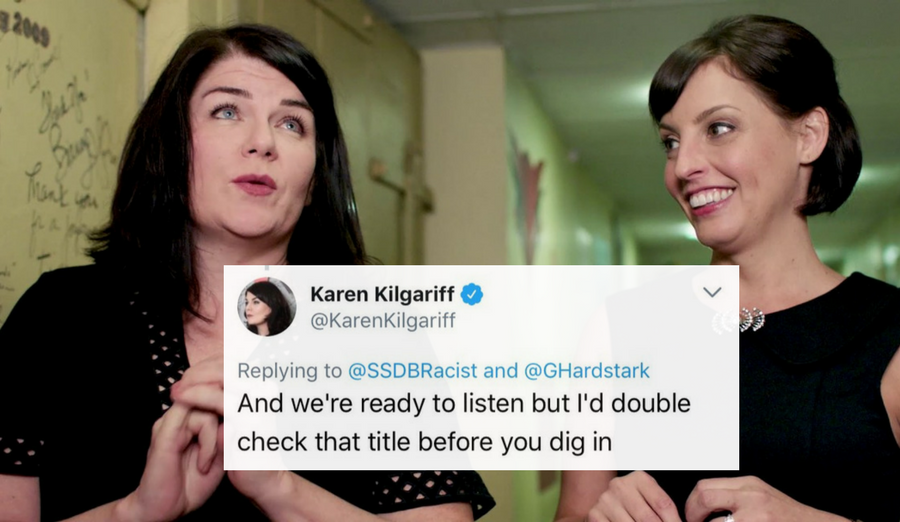 Sharing your love for true crime probably won’t show up on a list of conversation starters since discussions about it are met either with disgust, disinterest, or complete and utter devotion. So when Karen Kilgariff and Georgia Hardstark started recording My Favorite Murder, they were demure in their dialogue around murder (and were probably only mildly hopeful that it would become a thing). Surprisingly, way more people were interested in the intricacies of murder, crime, and cold cases than they thought, allowing the podcast to take off almost instantly. The show’s following quickly led to a Facebook group full of dedicated fans—who lovingly call themselves “murderinos,” a name created by a member of the group—that the hosts often gushed about on each episode. Within a few months, My Favorite Murder reached number one on the comedy chart on iTunes, LA Weekly named it “The Best Podcast for People Who Like Murder,” and many fans raved about its “communal power.” (We even included it on our list of podcasts all feminists should listen to.) But while the podcast and Facebook group proved safe spaces for some of the MFM community, others were faced with navigating familiar territory: straight, cis, white women maintaining the same systems of oppression they casually discuss that render murder victims of color and of the queer and trans community invisible.

It’s easy to get sucked into My Favorite Murder. Kilgariff and Hardstark provide the witty banter and comedic relief needed for such a gruesome topic. Their ability to point out the fatal flaws in the media’s crime coverage (most of the time anyway) is soothing in comparison to the troublesome firsthand accounts by law officers on American true-crime shows and the stuffy “expert” analyses given by one too many psychologists on British procedurals. The hosts also seemed receptive to criticism, creating a “corrections corner” during the show for this purpose. And the fast-growing My Favorite Murder Facebook group served as a venue for reaching the hosts both directly and indirectly, with Kilgariff and Hardstark often referring to listeners’ hometown-murder suggestions and sometimes responding to corrections-corner comments.

Taking ownership of their flubs was part of the reason I kept listening to My Favorite Murder, even when those corrections excluded the microaggressions I winced at each week. When listeners commented on the use of the word “prostitute,” Kilgariff and Hardstark started to use “sex worker.” When they received sharp feedback about how they wrongly (and flippantly) diagnosed murderers with mental illnesses and personality disorders—lumping psychopaths and sociopaths into the definitely-a-serial-killer pool even though that’s not always true—the pair began carefully constructing their words. However, during a recent corrections corner, Kilgariff and Hardstark both jokingly said, “Everything is appropriated,” a sentiment echoed by many others who lack a deeper understanding of the topic. As usual, listeners pointed out the ignorance and inappropriateness of the remarks in the MFM group, providing articles upon articles for the hosts (and uninformed fans) to use to educate themselves. Some fans who disagreed defended the hosts’ statements, calling the tone of the corrections “hostile,” and the hosts themselves never brought the topic to a corrections corner.

But the cultural-appropriation incident wasn’t Kilgariff and Hardstark’s first offense. On episode 72, “Steven It Out,” they quipped about how much easier it is for LGBTQ folks now than it was back in the ’80s. “The younger people don’t appreciate it as much…people back then not that long ago were absolutely forced to not only deny who they were but some were made to despise who they were to the point of having to kill,” stated Kilgariff. While not entirely false, the comments were ironic and insensitive considering that this summer marked the anniversary of the Orlando Shooting at Pulse and at least 22 transgender people have been murdered this year. When Hardstark covered the “Harlem Kevorkian” during the live show at the Beacon Theatre in New York City in March, Kilgariff allegedly attested to the unsafeness of Spanish Harlem, citing innumerable drug addicts (the episode was uploaded and later deleted). Meanwhile longtime East Harlem residents are fighting against gentrification to keep, in the words of filmmaker and resident Ed Morales, the “feeling of comunidad, one of knowing you’re safe at home in El Barrio and its ever-expanding familia.” Though seemingly harmless and supported by the media, such statements, especially when made by white people, reinforce the perceived need for Broken Windows Policing, which in turn facilitates gentrification and its effects, including closing businesses, displaced families, unaffordable housing, and the disproportionate incarceration of poor Black and Brown folks.

Yet when a Twitter account popped up that sought to “[point] out the problematic things from Our Favorite Murder say [sic] and how they allow the OFM fan community [to] be a safe place for racism,” Kilgariff quickly chided the account for getting the show’s name wrong. Fans were shocked to receive such a response from a podcast host who constantly reminds listeners that they make mistakes and aren’t conducting the podcast to any degree of academic accuracy. (Even a recent Rolling Stone article stated playfully, “While they do research their murders in advance, they refuse to feel beholden to every fact, exact date, or pronunciation.”) Rather than apologizing for (or even acknowledging) their slip-ups, they later rambled on about not “ever [being] able to empathize.” And in a clear move to cover their own asses after the eruption, they discussed the case of the Central Park Five, in which no one was murdered. Unfortunately for them, stammering on about the injustices of a case with which we’re all very familiar doesn’t make up for silencing voices of color. 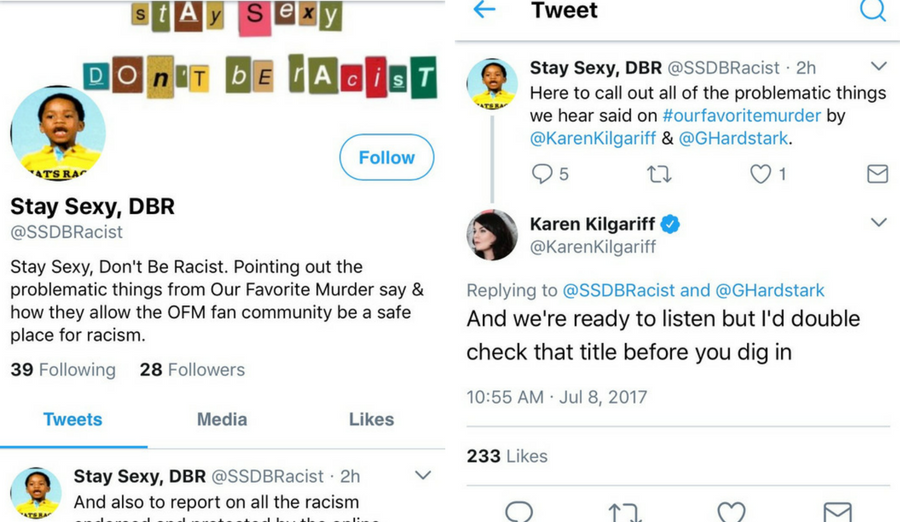 Kilgariff’s response to the Stay Sexy Don’t Be Racist Twitter account—because “put some respeck” on our name before you call us racist.

Whether overt or under the guise of good intentions (“can’t we all get along?”), it is these very silencing mechanisms that make it easy for society and the media to ignore and bury the murder cases of victims of color and of the queer and trans community. They are the instruments that allow society to depict us as the “underprivileged” victims of gang violence, drugs, and poverty rather than innocent lives taken by cold-blooded murderers (as if any of those things are somehow deserved or expected because of the color of our skin, sound of our name, place where we grew up, or people we love). That allow serial killers to keep murdering us without consequence or to become icons without the media ever having to utter our names.

Last year, Lonnie Franklin Jr., the “Grim Sleeper,” was sentenced to death for terrorizing South Los Angeles for over two decades, killing more than 10 Black women. According to the Los Angeles Times, “The attacks failed to raise alarms the way other famous serial slayings by killers such as the ‘Hillside Strangler’ or the ‘Night Stalker’ did” because his victims were “young, black, vulnerable, and, at times, ignored.” He hasn’t been the only serial killer of color to work in this fashion. According to Scientific American, “African-Americans comprise the largest racial minority group among serial killers, representing approximately 20 percent of the total. Significantly, however, only white, and normally male, serial killers such as Ted Bundy become popular culture icons.” Among the most prolific is Anthony Sowell, who raped and killed at least 11 Black women in Cleveland within a span of two years. A year into his killing spree, one of Sowell’s victims escaped and attempted to report the crime, but police didn’t believe her, setting him free to continue his reign of terror. Two weeks before police found the bodies, a business owner caught Sowell outside naked standing over the body of a beaten and bloodied Black woman. While the ambulance did come to take the woman to the hospital, police arrived hours later and never interviewed the suspect. Many in the community questioned why it took so long for police to uncover his heinous crimes (the house in which he lived reeked of human flesh from the inside out), but others said, “If you’re from this neighborhood, you come to expect that.” 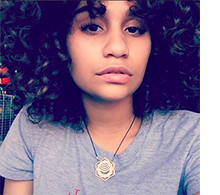 Left: Maylin Reynoso went missing on July 27, 2016. When her body was found in the Harlem River on July 31, no major news outlets reported on her death. Social-media outrage brought her story to light. Image via Instagram

Despite the fact that more than 24 percent of serial killer victims in the United States are Black, seven percent are Latino, almost two percent are Asian, and 0.5 percent are Native American, the media has shown us time and time again that no matter how loud we shout, we’re just not the Karina Vetranos or the JonBenéts—we’re the Maylin Reynosos, the Mesha Caldwells, and the countless other “invisible” victims who go missing into the night. Too many murders and deaths of people of color, especially of Black people, not only fly under the radar, but are also actively ignored by the media, used to perpetuate harmful racialized stereotypes, and serve to justify aggressive racist police tactics. That’s why it’s so important that we not only make sure to represent victims of color well, but also cease to promote or accept tone policing, respectability politics, and straight, white people serving up opinions that go unchecked.

This is not to say that Hardstark and Kilgariff haven’t covered murders in which the victims and murderers were people of color. To their credit, the duo has touched on police brutality and systemic racism and expressed disappointment in the way victims of color and of the LGBTQ community often go unbelieved. (They did an incredible job covering the death of Mitrice Richardson.) But by not addressing the concerns and corrections of their POC and LGBTQ listeners, they themselves are contributing to a system in which white people can pass the buck rather than own up to their transgressions. No matter how small, the seemingly innocuous remarks casually thrown into their conversations provide the confirmation bias with which our deaths are justified and our murderers underestimated. We shouldn’t be lifting up people who continuously ignore the validity of our existence and our qualms under the argument that “Whatever, we’re all doing our best.” 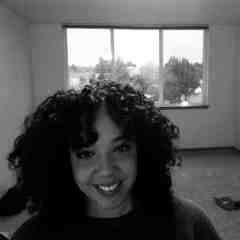 Ashley Duchemin was formerly the managing editor at Bitch Media.