Abolitionists Are Bringing Defund the Police Demands into 2021 | Bitch Media

Defund the Police Is a Demand—and We Should Heed It 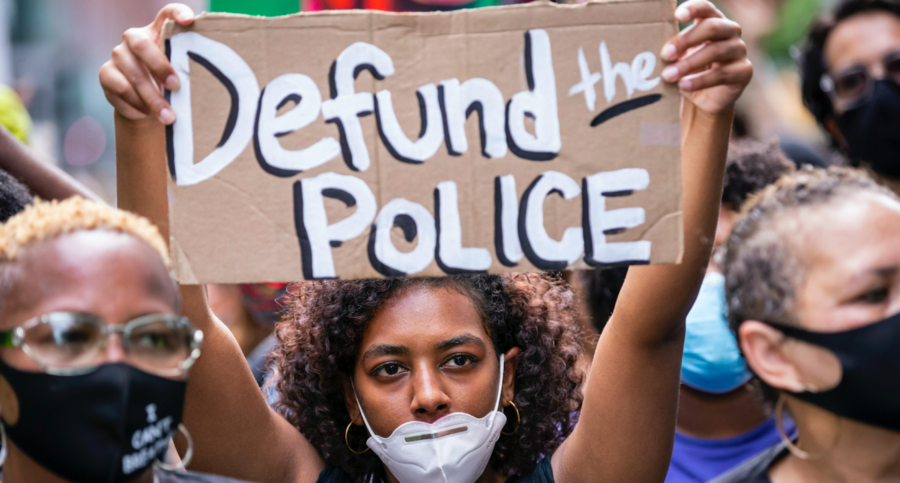 A protestor wears a mask and holds a homemade sign that says “defund the police” as they perform a peaceful protest walk across the Brooklyn Bridge on June 19, 2020. (Photo credit: Ira L. Black/Corbis via Getty Images)

Almost daily, a new politician or pundit decides to publicly discuss the failings of “defund the police” as a slogan. Perhaps it was predictable that a mainstream media that has generally refused to engage with the failings of both corrupt law enforcement and the prison-industrial complex abolition would only start acknowledging the abolition movement in order to criticize it. But as most organizers know, the moment an idea enters the political mainstream, it is often greeted suspiciously, as unprecedented radicalism, before being co-opted and sanitized for neoliberal purposes. Earlier this year, for instance, Campaign Zero, the liberal police-reform campaign, rebranded to include abolition in their 8 Can’t Wait proposal—without actually admitting that none of their reforms even considered abolition. But many of the people who dismiss abolition seconds after first hearing about it don’t seem to understand that defunding the police isn’t a new idea that simply emerged in the summer of 2020 without any thought about how it would work in practice.

Organizers have been trying to divert funds from police budgets into community services for years, whether or not they used a particular slogan to express that aim. “Defunding the police [has been] an abolitionist demand, which means reducing police budgets until they get to $0,” Ngozi Alston, a 25-year-old community organizer, told Bitch. “These demands have been pushed for years by Black organizers from Atlanta, Chicago, New York City, and Minneapolis.” By reducing police budgets, communities are able to make autonomous decisions about how to use resources that would otherwise go to surveilling, arresting, and incarcerating them. To Alston, the demand was amplified this year because “we are facing a global pandemic with little economic relief to cancel rent, student debt, and access to healthcare [as] police budgets continue to increase.”

The unprecedented tragedies of 2020 have displayed on an immense scale how and where the federal and state governments spend money, and whose lives are prioritized by its choices. “Last year [in 2019], NYC voted to spend $10 billion on new jails, claiming progress for criminal-justice reform, while communities continue to lack resources,” Alston said. “Deprivation by design continues to fund police budgets. It’s an irresponsible use of funds.” Meanwhile, more than 25,000 people have died from COVID in New York, many of whom are BIPOC essential workers who cannot work from home. Incarcerated people in New York and nationwide are similarly vulnerable, with no options to social distance. The inescapable question posed by such realities is: Whom could the city have saved by better resourcing life-saving services—such as rent relief, free childcare, affordable housing, and free healthcare—rather than bloating the budget of Mayor Bill De Blasio’s killing brigade? This winter, as we watch COVID cases spike once again across the country, it’s painful but necessary to think critically about what resources might have been marshaled toward pandemic relief had politicians not fought tooth and nail to maintain their police, prison, surveillance, and jail budgets.

Sophia Gurulé, an immigration attorney and abolition organizer who represents incarcerated people facing deportation, believes that the recent focus on defunding the police has gained popularity not only “because police reforms have proven to be a refining of the violent apparatus of policing,” but also because the COVID-19 pandemic has highlighted how many times governments have defunded services that help rather than harm. Gurulé notes that communities (especially poor, working class, Black, immigrant, and disabled communities) have depended on mutual aid to take care of one another because governments have spent decades defunding public schools, affordable housing, and services like SNAP. “They tell us [they] have no money to give people stimulus checks, to cancel rent, or to invest in local businesses that support entire families and communities. Yet who remains basically fully funded? [The] NYPD,” she says. “Why is the city still trying to build $8.7 billion jails? It is a slap in the face, and people are tired of the gaslighting, manipulation, and lies.”

It definitely doesn’t help when prominent politicians—including, most recently, former President Barack Obama, unsuccessfully continue that manipulation. If Obama wanted to be taken seriously in the fight against police violence, Gurulé says, he should have started by engaging “in a good-faith discussion about why the police reforms he pushed during his presidency have done nothing to meaningfully address police violence.” Doing this would acknowledge that his administration’s approach to policing was wrong and perhaps even push Joe Biden’s incoming administration to abandon its mixed messaging and weak talking points.  It’s unlikely that Obama would admit culpability—and it’s also unnecessary for the success of abolition movements. Abolitionists are not shaken or deterred by these hollow and misguided criticisms. There are other things to worry about.

As Biden prepares to take office, he has declared his intention to give police even more money to somehow do their jobs better, saying “I want to get police more money in order to deal with the things they badly need from making sure they have access to community policing, that they have also in the department’s social workers, psychologists, people who in fact can handle those god awful problems that a cop has to have four degrees to handle.” We know this hasn’t and won’t work. Cops don’t kill people because they lack degrees. Biden’s policing platform is one of the reasons abolitionists have warned that we shouldn’t get complacent once Trump leaves office. It’s imperative that political-education campaigns continue in the Biden presidency. “Some people may start feeling more comfortable, safer, now that [Biden and Kamala Harris have] been elected, but we weren’t safe under Obama either,” Alston said. Instead of backing off, this is the time to barrel forward with our demands. She said we must continue “sharpening our collective analysis to be able to identify bad faith arguments and reformist solutions and attempts at co-optation of abolition.”

It’s not only about pressuring politicians. We must also ensure we’re prioritizing community care.

It’s not only about pressuring politicians. We must also ensure we’re prioritizing community care. Neither the pandemic nor the unemployment crisis are over. Congress has greenlit a second stimulus check that is less than most people’s monthly rent and evictions continue across the country. We must ensure that the most marginalized among us have everything they need, which is also a way to see where budgets for care are slashed while police budgets remain fully funded. If politicians don’t agree to our demands, Alston says “the fight will continue. They expect us to lay down and die quietly, that’s already happening and we won’t go down without a fight.” Organizers have been fighting to defund the police and fund communities for years. They’ve done so when the world wasn’t watching.

A few liberals and a handful of Vox pundits won’t deter them from continuing toward a future in which people have the resources they need to survive and flourish. Despite attempts by establishment politicians and pundits to neutralize these demands and bicker over the effectiveness of a slogan, the fire has already been lit. People who had never heard of abolition became energized to fight for its realization in the summer of 2020. There is no going back to the time before the uprisings, even if moderates complain about allegedly divisive language. “Reformers can keep trying, maybe they’ll get it eventually, but we [abolitionists] will not be distracted by bad-faith arguments committed to misunderstanding the concept of defunding the police,” Alston said. “We have moved beyond that.”