Marianne Williamson is a Danger to Disabled People | Bitch Media 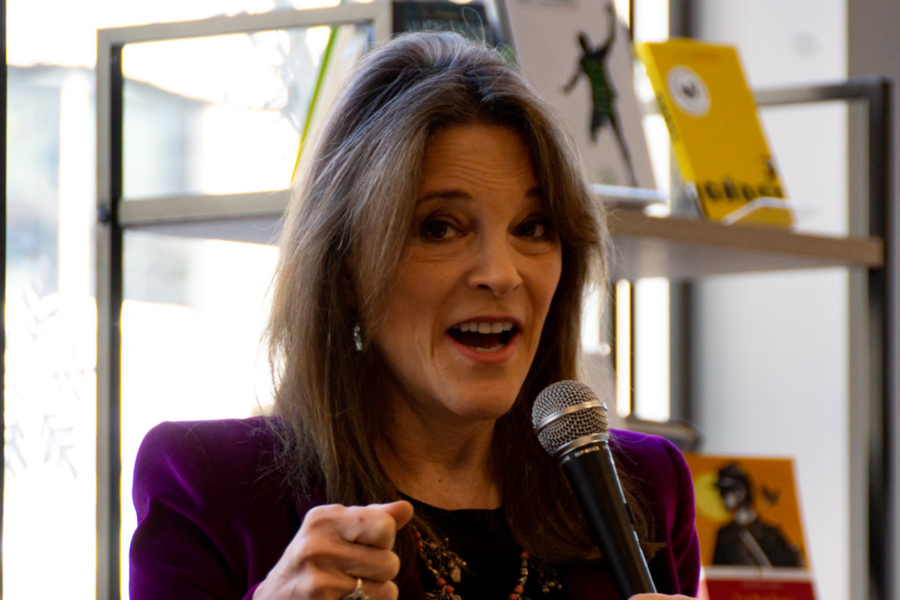 Donald Trump and Democratic presidential hopeful Marianne Williamson are remarkably alike. Despite hailing from opposing sides of the party divide, they’ve built campaigns that appeal to the highest ideals of white individualism. Both boast that they alone have what it takes to save our nation, with Trump seeking to “make America great again” and Williamson promising to “harness love [to] win.” Both had comparatively privileged upbringings. Both built personal empires selling products that were at best unconventional and at worst little more than snake oil. Like Trump in 2016, Williamson is considered to be a longshot candidate whose surge in popularity—following the most recent Democratic debate, Williamson was the most-Googled candidate).

And behind Trump’s bluster (and bigotry) and Williamson’s lofty New Age platitudes is another similarity: Both subscribe to ideologies that eschew reliance on social and economic institutions in favor of self-reliance and glorified individuality. But such ideology has a dark side: If poor and sick people can simply manifest their way into a life without poverty and sickness, then not doing so is a choice. In other words, in the worlds of Trump and Williamson, poor and sick people have only themselves to blame for being poor and sick.

The Republican Party in its current iteration has a horrific record when it comes to the intersection of illness and poverty. Trump has repeatedly proposed budget cuts for disabled Americans totaling $72 billion over 10 years, despite research that shows it’s bad economic policy. Republican Senator James Lankford has proposed monitoring disabled people’s social-media pages to make sure they don’t look too happy to receive disability benefits. And last year, despite the GOP’s repeated moves to shred nearly every single provision of the Americans with Disability Act, Republican lawmakers and election officials suddenly embraced the ADA when they discovered they could leverage it to shut down polling locations in overwhelmingly poor, Black, and Native American communities.

As such, the bar is low for Democrats when it comes to being the party of better options for disabled and chronically ill people. And yet there are several Democratic presidential candidates who are proving to be just as dangerous, and “set your crystals out in the moonlight” meme aunt Marianne Williamson is undoubtedly the worst. Best known for being a bona fide Friend of Oprah, self-styled “Bitch for God,” and owner of an accent no one can quite nail down, Williamson has a long history of being publicly loud and wrong about disability and illness. In June, she referred to vaccination mandates as “draconian” and “Orwellian”, comparing the issue of compulsory vaccinations to the abortion debate. She later (sort of) clarified her stance on with a tweet emphasizing that she understands that “many vaccines are important and save lives,” but that she also understands “some of the skepticism that abounds today about drugs which are rushed to market by Big Pharma.”

This isn’t Williamson’s first rodeo with controversial vaccination position, nor is it her first online non-apology: In 2011, she apologized, via Facebook, for posts she had made on the platform that were critical of mandatory vaccination, saying it “isn’t a black and white issue”. Williamson also holds bizarre, unscientific, and dangerous views on mental health. She has referred to depression as a “spiritual disease” and repeatedly cast doubt on the mere existence of clinical depression, calling the idea “such a scam” in a 2018 interview with Russell Brand. She once referred to those who take antidepressants as “digesters of pills that ‘just take the edge off’,” adding that “sometimes the edge should be ON!” while suggesting that antidepressants numb people. Following Robin Williams’s 2014 death by suicide, she (incorrectly) blamed antidepressants; in reality, Williams was suffering from Lewy body dementia, a disease that led to horrific psychiatric symptoms and his eventual suicide.

In 2018, Williamson asserted that mental illness and antidepressants were one of the leading causes of mass shootings—a claim that has been repeatedly pushed by the right and subsequently debunked. Since announcing her presidential run, Williamson has tried to pivot and portray her stance as merely a suggestion that antidepressants are being overprescribed in cases where people are situationally sad, rather than clinically depressed (a topic of current debate among mental health experts), her approach to mental-health issues—regardless of intent—risks both increasing stigma and discouraging people from seeking treatment.

Williamson’s attitude toward physical illnesses is no better: In her 1992 book A Return to Love, she wrote that “sickness is an illusion and does not exist,” and that “cancer and AIDS and other physical illnesses are physical manifestations of a psychic scream.” According to Williamson, “sickness is not a sign of God’s judgment on us, but of our judgment on ourselves.” According to HIV researcher Dvorah Landsman, her rhetoric surrounding the AIDS epidemic—in her 2010 A Course in Weight Loss she suggested that men with AIDS could cure themselves by forgiving their enemies—led to patients dying while convinced they had caused their own illnesses. Williamson may see herself as a political maverick, but the damage her words cause is no different than that caused by the many political figures who ignored the disease’s impact on queer communities.

Williamson continues to imply that Americans cause their own illnesses: The healthcare policy on her campaign website links obesity to chronic illness within its first four sentences, later adding that Americans must come to terms “with how much we have acquiesced to the many unhealthy practices that should be considered unlawful.” Though many diseases have roots in genetics—a factor largely outside of any individual’s control—the only mention of heritable illness on Williamson’s policy page is in reference to her support of mandating that genetically modified food be labeled as such (despite overwhelming consensus by scientists that GMOs are safe and that labeling them is unnecessary).

It’s not surprising, then, that Williamson sees mental and physical disability as inherently bad and believes society’s goal should be to eliminate it all together (something the disability community vehemently pushes back against). When disabled healthcare advocates have pointed out the flaws in Williamson’s rhetoric, her response has primarily been defensive insistence that they are wrong, followed by the suggestion that any critiques are the bad-faith actions of trolls. Recently, Williamson marked the anniversary of the Americans with Disability Act by visiting a sheltered workshop—a segregated worksite where disabled people are paid significantly less than minimum wage (often as little as pennies an hour), to do work in the name of “job opportunity.” Celebrating the ADA at the workplace that essentially violates its provisions is a gaffe that, as advocates were quick to point out, shows Williamson’s continued unwillingness to engage with the disability community on more than a performative level.

None of Williamson’s anti-disability rhetoric is accidental. It’s the foregone conclusion of an individualistic spiritual ideology that has always preached that solutions to one’s problems are found within. Williamson’s approach to healthcare doesn’t just de-emphasize the importance of systemic political change—it actually shames candidates who do put forth detailed plans. According to Williamson, the solution to chronic illnesses and disabilities affecting one in five Americans isn’t detailed policies that ensure adequate healthcare for everyone, but rather teaching everyone how to just not get sick in the first place.

Williamson’s approach to illness and disability is an illogic akin to the current Republican party’s approach to poverty: Have you tried hard enough to not be poor and sick yet? Underneath her friendly persona is a mean-spirited form of victim shaming that would certainly lead to dangerous policies were she elected. You cannot serve the best interests of disabled people if, deep down, you think their disabilities are actually their fault. Each time the disability community has raised the alarm about Williamson’s horrific record on illness and disability, Twitter and political pundits alike have paid them little heed. Actress and activist Alyssa Milano recently supported a fundraiser for Williamson’s candidacy, and popular leftist podcast Chapo Trap House recently invited Williamson on for an extremely friendly interview.

No matter the outcome of her bid for the White House, Williamson’s run has certainly raised her profile—something that’s likely to translate to future book deals and sales. And that’s to say nothing of the memes. Nearly everyone outside of the disability community seems to think that a little ironic support of Williamson is all in good fun. But Donald Trump started out as a meme too, despite the disability community’s warnings at the time. Now he’s sitting in the White House, hurting disabled people. Maybe this time around, when disabled people raise the alarm, everyone should listen.

by Alice Wong
Senator Duckworth unapologetically brings her full self into every space she navigates as a parent, veteran, politician, and disabled woman of color.
by Kendall Brown
View profile »