Joe Biden Will Be Bad on Policing, No Matter Who He Chooses for VP | Bitch Media 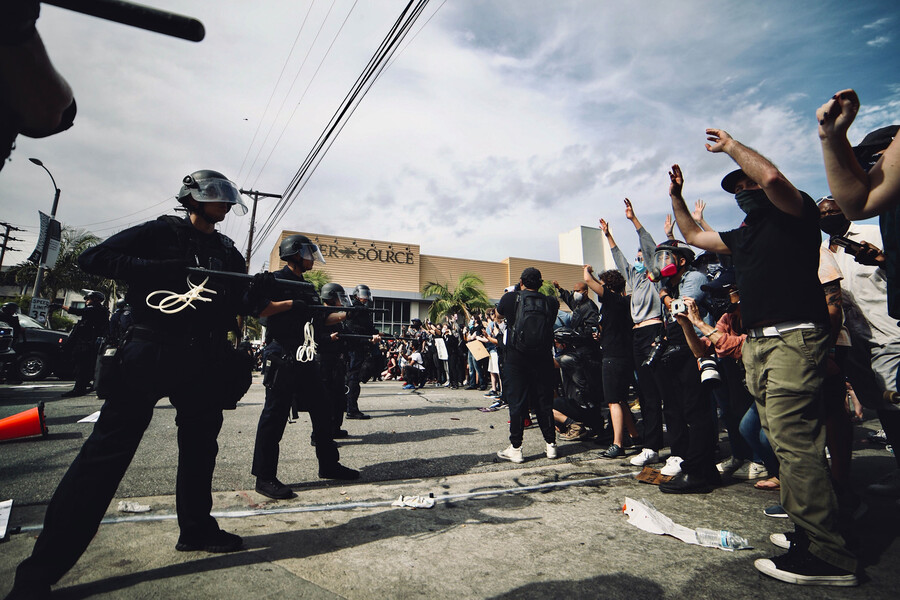 A line of police pointing guns at unarmed protesters with their hands in the air during a protest in the Fairfax District in Los Angeles, California on May 30, 2020. (Photo credit: Joseph Ngabo/Unsplash)

Back in June, I felt my jaw drop as Democratic presidential nominee Joe Biden asserted during a campaign event that police should be trained to shoot unarmed people in the leg instead of the heart. I shouldn’t have been surprised at Biden’s suggestion that aiming a foot or so lower was a solution to police brutality; this is, after all, the same man who coauthored the 1994 crime bill. I just wasn’t expecting him to emphatically endorse violence as an approach to police reform itself. His words reflected his own personal perspective, but they are also emblematic of the Democratic Party. Can we expect more from the party that was represented in the 2020 presidential primaries by candidates with harmful policing histories?

Biden has supported tough-on-crime policies for his entire political career, though he downplays his decades-long investment now. As a senator, Biden criticized President George H.W. Bush for being too lenient in punishing drug dealers and drug users. His solution? Securing funding for more police, more prosecutors, and more prisons. Attaching the Violence Against Women Act to his tough-on-crime legislation doesn’t excuse the damage that ramping up the War on Drugs and mass incarceration did to Black, Indigenous, and Latinx people in the United States. Even today, in the midst of a public reckoning with race and policing, Biden doesn’t acknowledge the bill’s devastating effects and has recently claimed it “restored” U.S. cities previously plagued by crime.

Other Democrats, particularly mayors, have publicly expressed their support for the police amid recent protests, choosing to share empty platitudes rather than support real change. New York City Mayor Bill de Blasio, Atlanta Mayor Keisha Lance Bottoms, Minneapolis Mayor Jacob Frey, and Chicago Mayor Lori Lightfoot have all been roundly criticized by activists and organizers for saying they support police and protestors, but nevertheless supporting police forces unleashing militarized violence on demonstrators. Senators Amy Klobuchar and Kamala Harris, two of the women Biden has been rumored to be considering as a running mate, previously worked as prosecutors responsible for enforcing many tough-on-crime policies. Despite ever-widening differences of opinion on healthcare, taxes, and immigration, Democrats and Republicans continue to agree on policing—namely, sharing the belief that cops keep Americans safe.

This makes sense, as the majority of politicians—regardless of party—are white, wealthy, and older than 50, and have spent their political careers building relationships with police unions. These wealthy, white people are enriched when the country’s status quo is maintained at the expense of Black people and other people of color. In other words, maintaining white supremacy via law enforcement is a bipartisan effort. Republicans may be more overt about it: touting themselves as the party of law and order, more staunchly supporting the institution of policing, and responsible for Black Lives Matter rejoinders like “Blue Lives Matter.” Semantics aside, however, the differences between the parties’ policies are not substantial: As Cherrell Brown, a lead organizer with 350.org, noted to Bitch, “Neither do quite enough. Eric Garner was killed by an illegal chokehold in 2014, 21 years after New York put a ban on the hold. So the reforms Dems support still don’t do enough. Notable Democrats, as well as Republicans, have even asked for an increase in funding to police as a response to this current moment.”

Historically, Democrats have supported reforms, like banning chokeholds and requiring body cams, that don’t actually move funding and power away from the police. “If defunding the police is not on the table, then what we’re actually talking about…is reforming police killing techniques: banning chokeholds, requiring other officers to step in, use of force, etc,” community organizer Delaney Vandergrift told Bitch. “What we’re actually saying when we describe those reforms from establishment Democrats as ‘wins’ is that killing us is fine if it’s a little less brutal, if they’d hold our hands while we die by [theirs].” As we see more and more revelations about the corruption, institutional racism, and illegal activities of police officers, minor behavioral reforms, like banning chokeholds or firing officers who run over protestors, aren’t enough. The demand for broad, comprehensive change has to be bigger than that.

Abolitionist Mariame Kaba wrote in a 2014 article for TruthOut that there are certain types of reforms we should always oppose, including those like technology-based reforms (like body cams and predictive policing) and community-based policing that actually increases police funding and power. During these times, when police reform is at the forefront of cultural conversations, we should be especially wary of calling to adopt reforms like these. More transformative efforts worth supporting instead include those that strip money away from police departments, halt new recruitment, end surveillance of marginalized communities, and demilitarize the police force. The money saved by such measures could then be diverted to better support the communities most impacted by police violence with non-carceral violence prevention, affordable housing, and more.

Historically, Democrats have supported reforms, like banning chokeholds and requiring body cams, that don’t actually move funding and power away from the police.

With abolition as the ultimate goal, there are some reforms that both Vandergrift and Brown consider more effective than those in Democrats’ current platform. Both mention the Breathe Act, which was crafted by the Movement for Black Lives’ Electoral Justice Project. If passed, the Breathe Act would divest resources from the prison-industrial complex and invest in better approaches to community safety. Money would be allocated to build healthy, sustainable, and equitable communities, specifically supporting the self-determination of Black communities. “This bill lays out exactly what Black communities and organizers are demanding across the board,” Vandergrift said. Budgets are moral documents, and the way they’re determined and spent should be decided upon through a participatory budgeting process wherein the people affected most by the budget have a role in allocating them.

Brown also supports the Breathe Act because she wants to focus her organizing efforts on local work that’s pushing money out of policing and into communities. However, she considers attempts to move individual politicians to the left to be more trouble than they are worth; she’s “more interested in pushing radical legislation as a useful endeavor on the road to abolition.” I tend to agree with Brown. Most likely, Biden won’t put Democrats on the right path on policing. Based on his history and the platform he’s running on today, he’s likely “too many steps behind” as Brown puts it. And his likely VP pick may not be any better. With that in mind, Vandergrift is setting her sights on the local fight where, she says, “People are winning the battle to defund the police [and create] communities that care more about compassion and transformation than punishment.”

This is not to say that there isn’t a place for people who want to focus on electoral organizing. There are certainly some politicians that we can move further to the left to support more revolutionary changes to the current system of policing. But how far left they can move is the key question. The real fear, as Brown says her elders often remind her, is that activists like here will “[drain] all of our energy and resources into the political game.” We should seize this moment, one where demands of defunding the police are gaining traction. If it’s possible to take that traction all the way to the White House, that would be great—but the fact that our two dominant parties aren’t ready to support abolition. “What we actually deserve is for the state to not kill us at all, not create violence, or have the resources to do so,” Vandergrift said. And we’ll get to that goal—with or without Joe Biden.