CultureScreenraceTVlesbianOrange is the new Black

From Representation to Tragedy PornDid “OITNB” Fail Its Marginalized Viewers? 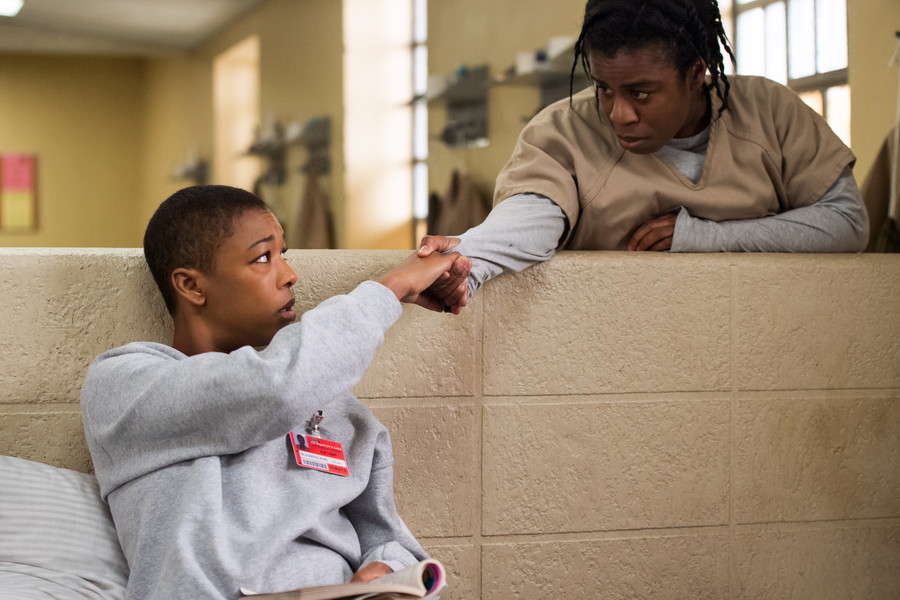 In 2019, it’s difficult to imagine streaming before Netflix created original TV shows, movies, documentaries, game shows, and other kinds of content. But Orange Is the New Black (OITNB), launched on July 11, 2013, was one of Netflix’s first original shows. At its start, it centered around a white woman who lands in prison due to a drug scheme she was involved in years prior to the show’s start, but as the show navigates through the first and second seasons, it expands its focus to include protagonists of color. Its success has heavily influenced the platform’s approach to developing original shows.

“[OITNB’s success] has certainly encouraged us to take more risks and to really think big about the types of content that we could program for an audience willing to try new things and discover different things, and also to push into making sure that we’re programming for underrepresented audiences and really try to serve all audiences,” Cindy Holland, Vice President of Netflix Content, told Variety for a recent cover story. What made the show different for Netflix and in general was its prioritization of characters of color and its goal of giving each character from the Latinas to the Black women to the queer women strong, impactful backstories that make each feel humanized in a real way. Now, as the final season of OITNB is released, one question still remains: Did OITNB truly serve underrepresented audiences or simply expose them to trauma porn?

Poussey Washington (Samira Wiley), a Black woman who worked in the prison library and, first and foremost, sought to make her friends laugh, was one of the first characters I connected with. Though I’m not exactly like Washington and we don’t have hugely similar experiences, she wasn’t flat or underdeveloped, making it so that we can all see a little of ourselves in Washington: She was funny, had a lot of friends and admirers, loved books and spoke German, and fell in and out of love. She was downright amazing—unlike any other Black lesbian I’d ever seen onscreen. And then she was killed in a shocking act of police brutality.

In Season 4’s make-or-break moment, a white corrections officer kneels on Washington’s back during a fight in the cafeteria, eventually suffocating her. The entire, painful scene plays out onscreen as other characters (primarily characters of color) who care about her helplessly watch her die. Her death was one of the most traumatic things I’ve ever watched because of how much time the show put into giving us time to get to know Washington, from watching her heartbreaking first love to watching her endless support for her friends and community. After watching that episode for the first time, I cried for the rest of the night and couldn’t sleep. I never watched OITNB with the same enthusiasm again.

The fallout of her death extended this pain, as the seasons that follow are heavily shaped by her murder. The officer who kills her isn’t indicted and there’s a riot, and the show pivots and all around feels darker in the episodes that follow. Washington’s friends hold corrections officers hostage. Piscatella (Brad William Henke), an especially aggressive guard, is violent and harms several women, the camera seeming to zoom into their agony, until he’s shot accidentally by other guards. Those who participate in the riot have their sentences extended and worsened. One of the most shocking results is that Taystee Jefferson (Danielle Brooks), Washington’s closest friend, is blamed not only for the riots, but for Piscatella’s death, and we’re forced to watch as she, a Black woman, is scapegoated to protect the majority white and male corrections officers.

In 2017, after Netflix aired the fifth season of OITNB, Allison Samuels wrote in the Daily Beast that she’d never watched the show and probably never would: “I’m simply not entertained by shows that feature large numbers of Black people exiting, entering, or already in prison…In shows that pertain to the criminal-justice system, particularly those held behind bars, Black people are suddenly ‘must haves.’ At least they are if the storyline is to be ‘real’ in any way.” Samuels took issue with the fact that, at the time of OITNB’s inception, Black actors were rarely able to find roles in shows unless they’re connected to being incarcerated. Samuels isn’t the only one who’s concerned about the show’s impact on the psyche of Black viewers.

“I had to stop watching after Poussey [Washington] died,” Jehan Roberson, a writer and artist living in New York City, tells Bitch. “I surprised myself by how deeply traumatized I was by that death and was not prepared for it. I watched the Eric Garner video and was still reeling from that; I made a conscious decision not to consume all those videos of Black death. I would watch the show all the time, but found myself sobbing and hyperventilating after I saw what they did to her.” 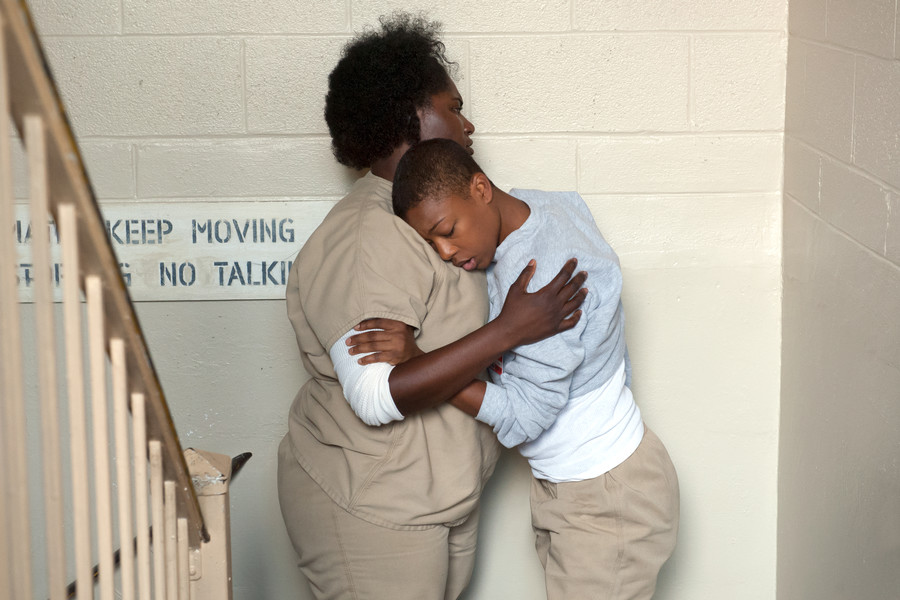 As a show about women in prison, OITNB was always going to deal with complicated, messy issues that would be painful to watch. The line between showing the world in all of its reality—trauma, pain, and all—versus crafting art that harms marginalized viewers, is a line that’s hard to walk. But is it the job of television to be an absolutely accurate representation of the world around us? I’m not so sure, as a marginalized viewer, that I want to see the same trauma I see in real life replicated onscreen. In a 2014 interview with The Guardian, Wiley said, “I feel a responsibility to the prison community. I feel like when you get to a place where you’re more visible or where people point at you and say ‘Samira Wiley, what is she doing?’ you have a social responsibility in the world.” But does OITNB feel that same responsibility?

“Killing off a lesbian, [B]lack woman who was screwed over by the system the way they did made me feel betrayed, like they capitalized on the pain of those suffering,” says Mia Siegert, bigender/queer author of JERKBAIT and the forthcoming book SOMEBODY TOLD ME. “I’m sick of seeing queer POC killed in media for the tear factor…I’d always had issues with OITNB, but seeing that episode cemented my fears that OITNB is a show made for white straight women who think they’re ‘naughty’ by liking ‘the lesbian prison show tee hee hee.’”OITNB is almost similar to content like Fifty Shades of Grey in its fandom in the sense that both products make viewers feel almost titillated in their acceptance of the “taboo.” In the same way that Fifty Shades was frustrating to, rather than admired by, many members of the BDSM community, OITNB seems to frustrate marginalized viewers rather than honor us.

Other viewers have expressed concern about how the episode’s fallout impacted people who are working on the show. “It was incredibly difficult to watch [the episode where Washington dies] and it took time for me to be able to do it,” Chahney, a Black queer educator and maker, tells Bitch. “Something that was in the forefront of my mind was whether there were any Black writers involved in this, how this could have been done in a way that pushed the conversation rather than just recreating trauma, and whether it was done responsibly with regards to the cast and team—were they offered opportunities for input and care before/during/after (this was done during the filming of When They See Us)? What was the point? I stopped watching the show after that. I had been iffy about its entertainment and content value before, but when that happened, I was done.”

“I was devastated at how they handled [Washington’s death] and have not watched [OITNB] since,” says writer Devon Pearl. “Her character was one I really appreciated (and not just because she was sexy as hell), and I could not watch after. There were so many other ways they could have handled her death, and the way they chose to was heartbreaking. As an out and proud queer woman, granted not one of color, I related so much to her on many levels. It was total trauma porn and the reason I lost respect for the show. And that’s sad. It had a lot of potential to handle a lot of things properly that it simply dropped the ball on or tried to sensationalize.”

Ultimately, it’s hard to watch OITNB torture characters of color and not feel like, as Siegert says, the show isn’t actually prioritizing it’s POC viewership; it’s interested in teaching, engaging with, and entertaining an audience of white people and just using POC to do so. The current demographic breakdown of OITNB viewers doesn’t include race—according to research by Nielsen Media (Netflix doesn’t often share viewership data, and tends to dispute Nielsen), 71 percent of OITNB viewers are between the ages of 18 and 49, with 66 percent of those viewers being women. I’m doubtful that Netflix will share a true breakdown of OITNB viewers, but I’m not surprised that so many queer people and/or Black people struggled to connect with and keep up with a show that so harshly tossed pain in our faces. It’s less that this was the first time OITNB delved into trauma porn, and more that Washington’s murder—and the show’s sympathetic portrayal of her murderer—solidified for many marginalized viewers that the show isn’t entertainment. It’s a show about women suffering in a prison, even if its viewers, and at times its creators, prefer to forget it.

Read this Next: The Racism on “Orange Is the New Black” Makes It Traumatic to Watch