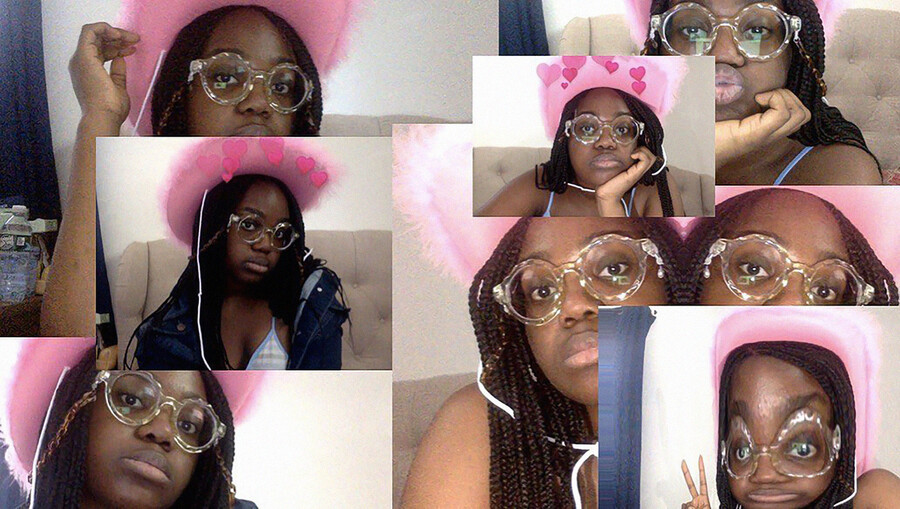 I was raised on the internet. AOL chat rooms were my after-school clubs, Tumblr was my recess, and I had my first long-distance relationships over an online pen pal platform for kids, which has disappeared long ago. Being online opened me up to a universe beyond what I could see—a lifeline for a teenager who spent most of her time daydreaming. Yet this alternate reality had an insidious real-world underbelly that jumped out from time to time. My hours spent scrolling slowly snowballed into anxiety-induced spiraling. Predictive keyboards became ghosts, haunting me with my past language that had become data for corporations. Entangled in the dynamics of our physical realities, our virtual lives become another dimension to the power structures we experience IRL.

From surveillance to racist algorithms, the internet has routinely been used as a tool of global capitalism and white supremacy to enact violence. Thanks to social distancing, we’re more attuned to the vast possibilities of our digital landscape. Work-from-home models that were previously thought of as impossible are now in place, while much-needed intimacy can look like dancing the night away with your friends at a 48-hour Zoom party. My iPhone’s weekly screen time report is just another reminder of my intensified digital presence and the physical, mental, and emotional exhaustion that often follows. As we increasingly spend more hours online, especially during these times, how can the internet become more of a restorative space Ja’Tovia Gary’s 2020 sculpture, Citational Ethics (Saidiya Hartman, 2017), uses bright purple neon lights to feature the words of African American literature and history professor Saidiya Hartman, “Care is the antidote to violence.”

Pain necessitates medicine, and data healing—a concept championed by guerilla theorist and curator Neema Githere—alchemizes the trauma enacted by the internet into new technologies. Data healing is born from data trauma, a term created by media artist and programmer Olivia McKayla Ross, to describe the compounded effects of navigating digital infrastructures created to exploit, categorize, and discard personhood. “There’s digital encounters like not being able to find information about yourself or the stages of grief after being hacked, but how do we talk about the violence of being counted, of being sorted–and of not being counted, of not being sorted?” Ross told Bitch. “E-capitalism has taken movements and watered them down because once you label something, you limit what it can become. Predictive analysis limits our human potential for growth.”

Information can be used to harm people: For instance, Ross cites a trans teenager being outed by the targeted ads drawn from their search history, or survivors of eating disorders receiving triggering ads based on their previous searches. “I find that one key aspect of data trauma is when you’re treated as a set of habits, as a user and not as a person who can evolve and change their mind.” Ross also points to the language of the internet, with words such as submission on digital forms describing the power differentials when giving away information to faceless recipients and questions referring to the “cloud” when in actuality, the internet is a tangible network of cables and wires rooted in the earth, in our water, and in our walls. In summer 2019, Githere was introduced to the concept of data trauma in Drafting Neo Cyber-Feminisms, a gathering facilitated by Ross and New York–based collective BUFU.

“In this space, people were thinking about how predatory the internet was, but still working within it, endeavouring to see things from this techno-optimist perspective,” Githere told Bitch. “That led me to data healing—if there is data trauma, then there must be data healing. We deserve our pathways to bliss.” Githere, formerly known across the internet as findingneema, has been working with and on the internet for years. I first found her through digital diasporas, a project whereby she traveled around the Black diaspora and documented how the internet was being harnessed to “art-iculate” new identities online. She’s since created Divest from Instagram, a call to queer Black and Brown creators to leave the platform that profits from their creativity. Through community classes and online engagement, Githere has critically exposed the power dynamics behind data politics—the way our digital footprints are valued, extracted, and monetized.

“In my afro-diasporic conceptualization of techno optimism, these technologies were not created with us in mind; they were created by the military,” she said. “That being said, there are many ways in which they try and replicate the ways we connect with one another, with our culture, with our communities—and the bliss is how we reclaim that.” By prioritizing love over likes, data healing asks us to consider alternative metrics of engagement on social media. What shifts when we measure our impact by participating in conversations, thoughtful DMs, and the number of times something inspires joy in us? Radical Love Consciousness, Githere’s unschooling collective, shares helpful resources by creating worksheets about critical caption essayism (a practice coined by artist and educator Mandy Harris Williams), curating accounts that richen our feeds, and organizing virtual guerilla theorizing sessions where people brainstorm ways to use these platforms for change. While all of these are critical components of data healing, this concept is about more than reorienting our relationship with social media. People are also relearning how to live with technology.

Ross, who is 18 and therefore doesn’t know a world before the internet, believes that data healing is a form of care work. Since coining the term data trauma, Ross has become a cyber doula whose work aims to help people develop a positive relationship with technology. “You can use the internet while not existing within the designs that colonial powers made for us,” Ross says. “We’re never going to get back to a place where the internet doesn’t exist; it’s going to be here. Birds are building their nests with the plastic from people’s waste, so the job of a cyber doula is teaching people how to build their nests out of plastic.” Being a cyber doula can take multiple forms, including demystifying internet jargon by reading terms and conditions for loved ones, or sending helpful articles to friends that encourage them to ask more introspective questions.

Deep Down Tidal, a video essay created by artist Tabita Rezaire in March 2020, lays bare a parallel between the transatlantic cables in the ocean that connect us and the transatlantic slave trade routes. Noting the role of water as a conduit for data communication, Rezaire also points to the physicality of the internet and the violence it can be used to enact. “Same paths, same stories, same pains. Cables are the hardware of the new imperialism,” flashes across the screen, offering commentary on the insidious nature of data trauma. So knowing all of this, how do we care for ourselves online? “Picking a deletion day across your profiles of unwanted information, spring cleaning your iCloud to streamline storage, changing your passwords, reading terms and conditions before giving applications access—these are small steps to be aware of how you’re operating on the internet,” Ross says. “Start using more encrypted tools in your daily life, you can contact data broker agencies and ask them to delete your information. There are guides on how to do this if you look online, but that’s also what doulas can be for. I hope there can be more of us, to teach transformative justice between us and our networks in a way that’s gentle and empowering.”

By prioritizing love over likes, data healing asks us to consider alternative metrics of engagement on social media.

Our world has been changing over the past few months. Fragile systems and unsustainable practices have been exposed and communities are coming together to fill in the gaps. In the same realm as data healing, Black technologists such as tech anthropologist Alex Wolf and communications scholar Safiya Noble, are doing the dreamwork of envisioning restorative ways of relating to the internet; the magic of breaking out of binaries through intentional connection. Wolf’s YouTube channel breaks down her research into digestible videos, sharing her insight from years on the internet from recommendations for designing healthier technology to explaining the psychology behind the “like” button. Having recently published a report on the impact of Verzuz Instagram Live battles on intergenerational tech literacy, she continues to highlight the dynamics of our relationships with the internet during this climate.

Similarly, Noble’s 2018 book, Algorithms of Oppression: How Search Engines Reinforce Racism, exposes the unseen forces behind data discrimination against women of color. Currently, the Women’s Center For Creative Work, the critical AI research group Feminist.AI, and the Los Angeles chapter of the Free Black Women’s Library, are facilitating a biweekly virtual book club where participants are reading Algorithms of Oppression and unpacking “the internet as theme and platform.” This book club is one of the many interventions that demystify the abyss we know as the internet. Even still, the question remains: What do we want our world(s) to look like and how do we build it with the tools at hand? Data healing is the antidote to violence in our digital existence, arming us with the sight and care needed to decide how we shape an uncertain future.

Read this Next: LGBTQ Muslims and the Power of Online Spaces 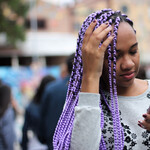 by Vanessa Taylor
Digital spaces are vital to combat near-constant assaults on our very being.
by Yaa Addae
View profile »

My name is Yaa and I am everything that I want to be in any given moment- mostly this looks like a dreamer, writer, and curator.