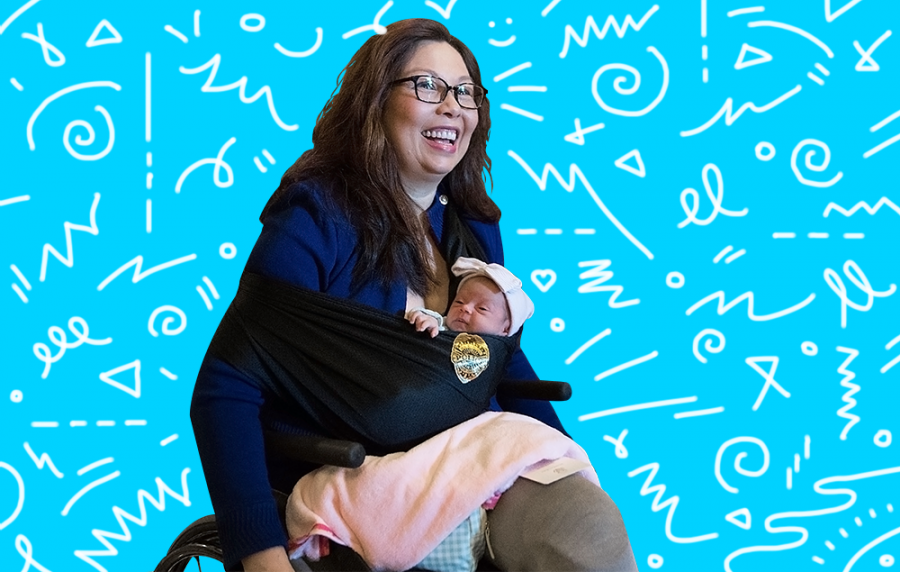 I’m ride or die when it comes to disability representation in politics, media, and culture. So when Senator Tammy Duckworth entered the U.S. Capitol Building to cast her first vote since giving birth to her second daughter, Maile Pearl, I had a lot of feelings. The joy on her face, the sight of her newborn nestled to her chest, her prosthetic leg and wheelchair in full view, and her use of an accessible entrance that wouldn’t exist without the Americans with Disabilities Act all coalesced into an immense feeling of disability pride.

It’s no secret that Tammy Duckworth is a badass. A retired U.S. Army lieutenant colonel, Duckworth is the first disabled woman veteran and the second Asian American woman to be elected to the Senate. She is also the first woman to give birth while holding office. This March, the senator led a coalition with 42 Senators pledging to vote against the ADA Education and Reform Act of 2017, a bill that would weaken civil-rights protections for people with disabilities. In addition to being the first sitting senator to give birth while in office, Duckworth submitted a resolution proposing a change in Senate rules that would allow senators to bring and breastfeed a child under 1 year old to the Senate floor in order to vote. The resolution passed unanimously on April 18, paving the way for future parents in the Senate.

Growing up a disabled Asian American girl who started using a wheelchair at age 7, I didn’t see anyone like myself in my community or in popular culture. It took me years to unravel an accumulation of internalized shame and ableism and work toward an identity that embraces all that I am. Now, at age 44, I’m fortunate to have connections with an amazing range of disabled people—and I noted that some of them, in particular other Asian American/Canadian disabled women, had strong reactions to Duckworth’s milestone moment.

Mia Ives-Rublee, founder and coordinator of the Women’s March Disability Caucus, tweeted that Duckworth “has shown me that disabled Asian American women can be leaders, can work in politics, and can manage both a job and a home life.” Grace Tsao, an online university instructor from Duckworth’s home state of Illinois, wrote that “It is great to have a lawmaker [with] the lived experience of being disabled go to bat on issues that people with disabilities face and fight for our rights” and went on to note that Duckworth’s own identity as a disabled woman of color makes her image and her work “even more powerful.”

Sandy Ho, the founder of the Disability & Intersectionality Summit, pointed out that the photo of Duckworth and her daughter en route to the Senate floor “sends a message of how valuable interdependence is for disabled girls of color who are often told to be strong, but to do it quietly.” Ho added:

“Senator Duckworth led her colleagues to change historical precedence in one of our highest institutions of government, but she didn’t do it alone and as our legislative history from this administration shows faced many disappointments and losses. Ultimately, the message Senator Duckworth sends to disabled girls of color, in my mind, is about the need to practice living your own permission rather than waiting for it to be given to you.”

And Ing Wong-Ward, a disabled parent and former CBC journalist in Canada, hoped that Duckworth will use her prominent platform in ways that benefit other parents with disabilities, pointing out that Canadian parents “can now take up to 18 months of leave and receive government support. Or they can split their leave with their partner. This benefits all families, including parents with disabilities.”

In fact, Senator Duckworth is already using her power to make all spaces accessible for parents: Along with the bill allowing newborns to accompany Senatorial parents to floor votes, she supported paid family leave and voted for legislation such as the Friendly Airports for Mothers Act, which requires airports to have a “private, non-bathroom space” for breastfeeding in each terminal. Crucially, she brings visibility to disabled parents, a group that most people simply do not see or understand.

People with disabilities in this country often face discriminatory challenges to their abilities to parent, and inadequate legal and child-welfare systems violate their rights with little recourse. A 2012 report from the National Council on Disability found that removal rates of children from custody can be as high as 70 to 80 percent for parents with psychiatric disabilities and 40 to 80 percent of parents with intellectual disabilities.

The issues facing disabled parents of color can be even more challenging. According to Carrie Ann Lucas, executive director of Disabled Parents Rights (and herself a disabled parent), “In my practice, between 75 and 80 percent of parents in court-appointed cases had one or more disabilities. Most of those parents were parents of color. [Both] people of color and people with disabilities are vastly disproportionately represented in the child-welfare system.” Lucas adds that she regularly sees parents of color with multiple disabilities be assigned “entirely white middle-class non-disabled professionals throughout their entire case, from caseworkers to service providers to lawyers, judges and even court personnel.”

Disabled parents deserve acceptance, respect, rights, and justice. But parental rights for people with disabilities, at all social and economic levels, will not improve until there are more disabled people who hold elected office. This is why representation matters, and this is why it is so gratifying to see the way Tammy Duckworth unapologetically brings her full self into every space she navigates as a parent, veteran, politician, and disabled woman of color.

Representation is about more than simply seeing someone who looks like you on television or in films. It is an opportunity to see someone like yourself with unlimited potential, freedom, and power—a way to imagine alternate realities for yourself. When folks joke with me that it’s unusual to see someone like me as if I’m a unicorn, the fury coursing through my veins transforms me into a majestic creature that will use its razor-sharp horn to smash through every binary, boundary, and system of oppression. I hope the visibility of a disabled parent of color like Duckworth is an opportunity for able-bodied people—parents and otherwise—to listen, learn, show solidarity, and take action. For now, I wish Tammy Duckworth and all the disabled moms out there doing their thing a very Happy Mother’s Day.

To learn more about disabled parents, check out groups such as Disabled Parents Rights, National Research Center for Parents with Disabilities, and Through the Looking Glass.

Alice Wong is a disability activist, media maker, and consultant. She is the founder and director of the Disability Visibility Project, a community partnership with StoryCorps and an online community dedicated to recording, amplifying, and sharing disability stories and culture. Alice is also a copartner in two projects: DisabledWriters.com, a resource to help editors connect with disabled writers and journalists, and #CripTheVote, a nonpartisan online movement encouraging the political participation of disabled people. Follow her on Twitter @SFdirewolf.