Every student must have access to protests and activism | Bitch Media 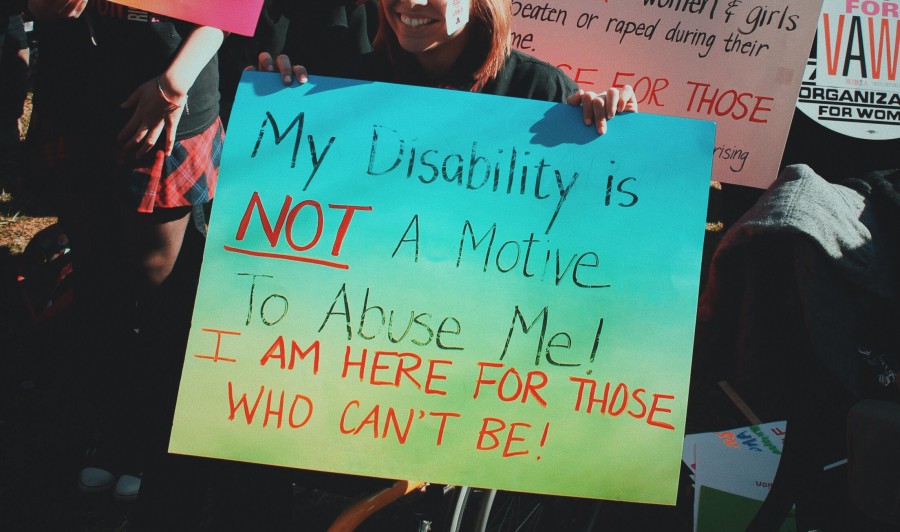 Every fall, some 20 million college students arrive on campuses large and small across the country, with first years thrown into a whirl of orientation activities to welcome them to campus life. On a growing number of those campuses, orientation activities include some level of consent education and anti-rape training, sometimes mandatory, whether in person or in the form of online modules. Next fall, said trainings are likely to be more extensive as the #MeToo movement collides with the campus sexual assault movement, but inevitably, some people are going to be left out of anti-rape organizing and activism. It shouldn’t have to be this way; campus organizing should be explicitly inclusive by its very nature.

The National Council on Disability’s recent “Not on the Radar” report exploring the status quo for disabled students and campus sexual assault highlighted one such group: Disabled students. Across the United States, disabled students struggle to access resources in the aftermath of sexual assault, but “Not on the Radar” also highlights the fact that many are also excluded from the resources and tools used to address this issue—one in three disabled undergraduate women experiences sexual assault during her time at school, and for that to change, campuses and organizers alike need to rethink the way they approach the disability community.

This is especially true of anti-rape organizing, which aims to reduce the incidence of campus rape in the first place by educating people about consent and respect. Pushback on campus sexual assault may also include private groups for victims/survivors, organizing advocacy trips to protest at the legislature or meetings of college officials, and a variety of other activities—some officially sponsored by the campus, others involving student groups, some rogue, the work of people fed up with options. These widely varied paths for activism also create widely varied opportunities for exclusion.

Conversation on accessibility often focuses on logistical accessibility: Are advocacy events held in buildings that are physically accessible for wheelchair users and people with mobility impairments? Are the restrooms in those buildings also accessible? Do campuses provide ASL interpretation and/or live captioning for the benefit of d/Deaf and hard of hearing students? Are large print materials available for people with vision impairments, and are there materials in screenreader-accessible formats? Are online resources hosted on websites that comply with accessibility standards? Do publicity materials make note of potential trigger warnings for events? If people are traveling to an event, are there accessible travel options available? Does signage and advertising explicitly indicate that organizers are considering accessibility, thereby encouraging disabled students to attend? Are speakers required to use microphones to ensure people can hear them clearly? Is the designated point person for accommodation requests actually in a position of power to meet those requests?

Cade Leebron, who was at Wesleyan University from 2010 to 2014, says: “Organizing seemed to happen without any thought of disability and disabled survivors.” A Take Back the Night march was held on an inaccessible route. When activists showed up at a meeting of the student assembly to testify about campus sexual assault, organizers were unprepared for disabled attendees and didn’t make modifications to address them. “Once I got there I just stayed there for several hours because it would have been so difficult to enter or exit,” Leebron explained. Some events considered mental health conditions—especially PTSD and anxiety related to sexual assault—with measures like frequent stops on marches for check-ins, snacks, and decompression, while still failing to incorporate students with physical impairments, especially those like Leebron’s MS that aren’t necessarily readily visible.

Despite the fact that the Americans with Disabilities Act is 27 years old this year, and that college campuses are subject to a variety of case law, regulations, and legislation specifically mandating accessibility, some campuses make a poor showing. Older campuses tend to be plagued with access problems thanks to pushback on modifying historic buildings, and many respondents to the NCD survey said they struggled to provide interpreters for d/Deaf and hard of hearing students, leaving them at a disadvantage during in-person trainings and events.This pattern of inaccessibility extends to official orientation and spontaneous protest alike. Moreover, the NCD report found that nearly a quarter of the mandatory campus sexual assault training modules provided online are not accessible, and students are punished for not completing them.

These are all critical elements of disability-inclusive activism; if people cannot get in the door, they cannot participate, whether they’re taking a school-sponsored training or going to a rally held by a campus advocacy group. But there’s another element of access that goes overlooked: the inclusion and consideration of disability as an identity category, and of the disability community as a group that needs to be explicitly acknowledged in advocacy work.

The one in three statistic uncovered by the NCD barely scratches the surface of a much deeper sexual assault crisis in the disability community, a crisis that’s made even more complex by the fact that few people are “just” disabled. Women, people of color, and LGBTQ people are all more likely to be disabled, which creates a web of amplified, interconnected, and dangerous vulnerabilities.

The dismissiveness that hovers over sexual assault in general—”they’re lying,” “he’s making something out of nothing,” “she wanted it”—can be even more intense when disabled people are involved. Mentally ill people, along with those who have cognitive, intellectual, and developmental disabilities, are at extremely high risk of sexual assault, and yet they, like other disabled people, tend to encounter disbelief when they try to report. The insistence on making rape about sex, not power, means countering attitudes that disabled people are “unrapeable” because of their disability status, something people assume makes them nonsexual, and certainly not sexually appealing. Meanwhile, people with communication-related disabilities may struggle to be understood, or may lack the language and framing they need to understand, and explain, that sexual contact was unwanted, making it impossible to report.

When the underlying injustices that plague the disability community are compounded by other inequalities—as when a mentally ill Black student attempts to report rape, or a Latina trans student who is also a sex worker says she was sexually assaulted at a party—people encounter disbelief, victim blaming, and shaming. Meanwhile, sexual assault can also create disability injustice: Survivors can develop PTSD, anxiety, and other mental health conditions in the aftermath of assault. A vicious cycle develops as marginalized communities viewed as easy targets are further traumatized. The lack of inclusive atmosphere in campus rape organizing may reflect larger exclusion on campus, leaving people isolated and dropping out of college because there’s rarely a retention program focusing on how to help them stay in school, like the case management approach at the University of Central Missouri.

When these complex intersections are left out of campus activism and training materials, with people reluctant to make a specific connection between sexual assault and disability, disabled students suffer. Leebron notes that in Wesleyan’s 2015 Disorientation Guide, campus activists included sections on disability and sexual assault, but didn’t explicitly connect them. Furthermore: “By including in the ‘disability’ section things like ‘believe your friends when they say they can’t do something,’ and not including much/anything about disabled folks’ agency or sexuality, I think it unfortunately (and likely accidentally) reinforces the stereotype of disabled people as asexual and weak.” The glaring lacuna on disability and rape in a guide dedicated to campus activism was troubling—and the latest iteration of the guide doesn’t even include a section on disability.

When incoming students aren’t provided with information about the explicit connections between disability and sexual assault from the start by their campuses, it’s up to organizers to pressure campuses to change the way they provide sexual assault prevention programming, and to ensure that their own work is inclusive and welcoming. But when organizers aren’t considering the issue, it creates a gap that leaves disabled students very vulnerable—like their nondisabled counterparts, disabled students may be leaving home for the first time, thrust into an unfamiliar, intimidating environment. While some may be steeped in disability pride and activism, bringing experience and knowledge to campus, others aren’t, and lack of support can leave them struggling, falling further behind each semester and unaware of their rights.

As the movement to push back on campus sexual assault grows, it’s critical to identify populations most vulnerable to assault and to provide them with the structural supports and resources they need. The data on disability and rape are out there, alongside the tools for consent education and consciousness-raising. Will activists rise to the occasion this fall?